On January 14, 1969, during operations in the waters off Hawaii, explosions rocked the nuclear-powered aircraft carrier Enterprise (CVAN 65), the most tragic of the more than 18,600 days the venerable flattop operated as a U.S. Navy warship.

During the Vietnam War, aircraft carriers launched thousands of missions against enemy targets, the ships of the Seventh Fleet traversing the waters of the Gulf of Tonkin with such regularity that sailors prided themselves with membership in what they called the “Tonkin Gulf Yacht Club.” Unlike in World War II, when Japanese aircraft, especially after the introduction of the kamikazes, posed a dangerous threat to U.S. Navy ships, the North Vietnamese did not present a major threat in the form of air or surface attack. In fact, the most costly damage in the form of material loss and casualties incurred by major warships during the war were in the form of disastrous fires at sea that occurred in the course of normal operations. One of them occurred in January 1969, on board Enterprise (CVAN 65), which just last year was placed on inactive status after more than a half century of service. That day was certainly the most tragic of the more than 18,600 days in which the first nuclear-powered aircraft carrier operated as an active warship. 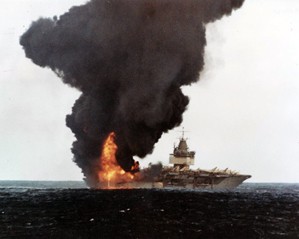 On January 14, 1969, the “Big E” steamed in the waters off Hawaii, her flight deck alive with activity as she participated in an Operational Readiness Inspection (ORI) prior to departing for the Western Pacific for her fourth combat cruise to the waters off Vietnam. On board was the typical array of aircraft for the time—F-4 Phantom II fighters, A-7 Corsair II light attack aircraft, A-6 Intruder bombers, sleek RA-5C photoreconnaissance jets, versions of the venerable A-3 Skywarrior, E-2 Hawkeyes with their distinctive radomes, and UH-2 Seasprite helicopters. As part of the inspection, these planes of Carrier Air Wing (CVW) 9 were fully configured for combat operations to evaluate all facets of how the carrier would operate under combat missions when she eventually steamed west from Hawaii in the coming days.

At 8:19 am an explosion erupted near the starboard wing of an F-4 Phantom II. This occurred because of the detonation of a Mk-32 Zuni rocket warhead that had overheated because of its proximity to the hot exhaust of a No. 6 MD3A Aircraft Starter Unit, known as a Huffer, which was operating next to the airplane. Fragments from the warhead tore into the fuel tanks of the F-4, the resulting fire spreading to nearby aircraft, the explosions of the ordnance they carried penetrating the flight deck and allowing burning fuel to flow into spaces below decks.

In the face of the inferno, Enterprise damage control parties went to work in earnest, getting the fire under control in less than an hour, and fully extinguishing it after three hours. In doing so, they benefited from lessons learned in previous fires at sea on board the carriers Oriskany (CVA 34) and Forrestal (CVA 59). All told, twenty-seven Enterprise crewmen lost their lives with an additional 344 men wounded by flying shrapnel or suffering various degrees of burns. Some survived by jumping overboard to escape the flames, one sailor peering through a hole in the deck afterwards and expressing thanks that he had been relocated from a destroyed compartment just a week earlier. Twenty-one year old Airman George Conditt bravely manned a tractor in an attempt to pull an aircraft away from the fire. “While I was hooking up,” he says, “a big piece of shrapnel flew through the plane. Fuel started running out and caught fire. I jumped out of the tractor, and in a minute, both plane and tractor were blown to bits.” 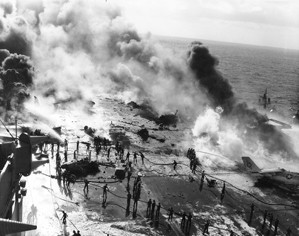 Just eighty-five miles off shore when the fire erupted, the “Big E” returned to port that same day, a TIME magazine reporter descriptively capturing her appearance. “Lumbering into Pearl Harbor last week, the mighty aircraft carrier U.S.S. Enterprise looked like a belated victim of Dec. 7, 1941. Huge holes yawned in the flight deck. Shards of steel plate and gobbets of demolished aircraft were littered across the 41-acre deck. Cables dangled over the side, and the flattop’s freshly painted grey hull was blackened and blistered. Said Samuel Spencer, who has been a Pearl Harbor shipyard rigger since the Japanese attack: ‘This is the worst condition I’ve seen a ship in since World War II.'”

Just as wartime yard workers put ships back into fighting trim during that war, their successors swarmed over the 85,000-ton carrier, amazingly completing work on her in a matter of weeks. On March 5, 1969, she set course out of Pearl Harbor to complete the interrupted deployment into harm’s way.