Washington D.C. has been a bustling place ever since it became the nation’s capital, the course of U.S. history determined beneath the Capitol dome, within the walls of the White House, and on the bench of the U.S. Supreme Court, the district’s streets traversed by victorious armies and demonstrators with causes ranging from prohibition to civil rights. For nearly two decades, at a spit of land at the confluence of the Anacostia and Potomac Rivers and in the in the skies above, the course of naval aviation history also took shape in Washington D.C., with Naval Air Station (NAS) Anacostia serving as the proving ground for naval aircraft. On January 1, 1927, that role became more formalized with the establishment of a flight test section as a separate department of the air station. Its first commander was Lieutenant George R. Henderson, who three years earlier had established 10 world records for seaplanes. 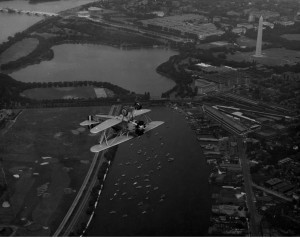 An O3U-1 Corsair pictured inverted during a flight over Washington D.C.
Download

A 1931 newspaper article captured the essence of its activities. “If you want to know what can be done with an airplane, the Navy Department recommends its flight test section at Anacostia…By the nature of their work, they [test pilots, engineers, and maintenance personnel] probably come to know as much about the behavior of planes as any group in the country.” Testing procedures were primitive by today’s standards, with paper, pencil, and a chronometric stopwatch oftentimes the only equipment carried aloft for recording data. This was most challenging in the high-altitude testing. “At a temperature of approximately 40 degrees below zero, he [the test pilot] not only must record with unerring accuracy the readings of seven instruments every two minutes, but must constantly regulate the mixture control of the engine and the amount of oxygen he breathes.”

The pilots passing through Anacostia read like a who’s who of distinguished naval aviators, including future admirals Frederick M. Trapnell, Ralph Ofstie, and Apollo Soucek, the latter soaring to world record heights over the air station in 1929 and 1930. Another famed aviator, Lieutenant Daniel W. Tomlinson, who along with two other aviators later formed an aerial stunt team called “The Three Seahawks” had a less fortunate experience flying out of Anacostia in 1927. In the cockpit of an F6C-3 Hawk over the Potomac River near Georgetown University, he had the misfortune of suffering an engine failure due to a faulty gasoline line. At an altitude of 1,200 ft. the young aviator needed to find a place to land quickly and set course for a nearby mud flat. Having had to extricate himself from the cockpit of an 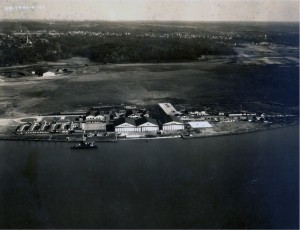 aircraft that submerged underwater in a previous forced landing, Tomlinson decided to unlatch his seatbelt. This caused him to be ejected from the aircraft into the mud when the wheels hit, leaving him wet and dirty, but fortunately unhurt.

Anacostia’s place as the Navy’s primary flight testing site during the Golden Age of aviation resulted in an array of machines making their way to its runways and the waters along its shores. For example, in 1931 alone, the flight test section put 42 different aircraft types through their paces, including nine fighters, ten observation planes, six transports, six flying boats, two bombers, four trainers, one scouting plane, and three other types of aircraft. During the late 1920s the presence of the facilities at Anacostia was a primary factor in bringing the Curtiss Marine Trophy Race to Washington D.C., the uniquely naval event witnessed by thousands watching floatplane racers zip over the waters of the Potomac and Anacostia rivers beneath the gaze of the towering Washington Monument.

With the growth of the nation’s capital and the ever increasing capabilities of aircraft, it was only a matter of time before the populated landscape and congested skies over Anacostia became less ideal for flight testing, a mission assumed by NAS Patuxent River, Maryland, in 1943.