posted in AIRCRAFT IN THE SPOTLIGHT on February 14, 2013 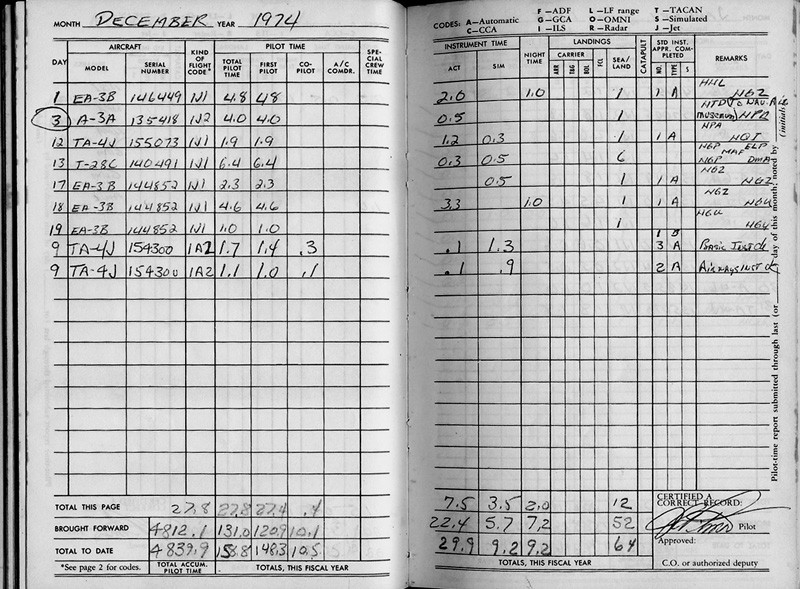 During his career flying Skywarriors, Commander Dick Pitman, USN (Ret.) had the chance to fly many a “Whale,” one of which happens to be the airplane displayed at the National Naval Aviation Museum. Not only did he fly it, but he was at the controls in December 1974, for its last flight to Naval Air Station (NAS) Pensacola for donation to the museum.
Assigned to Aircraft Ferry Squadron (VRF) 31, Pitman and Master Chief D.K. Ledgerwood picked up the airplane at its last duty station, Naval Missile Center ( NMC) Point Mugu, California, and flew it to NAS Pensacola on December 3, 1974. “I asked the Museum Director at the time [Captain Grover Walker] if he would like to go for a ride since there were about 11 hours of wing life left, if I recall,” remembered Pitman. “He declined!”

During his career, Pitman also had the opportunity to fly a VA-3B (Bureau Number 142672), which like one of the museum’s display aircraft, was converted to service as a VIP transport airplane. He ended up flying Admirals Thomas Moorer and John S. McCain as well as Vice Admirals Paul Ramsey and Tom Connolly. The latter officer “loved to fly the plane (with me in the right seat setting the power settings, dropping the flaps and gear and popping the drag chute on landing). He told me that he enjoyed flying the VA-3B almost as much as his ‘Open Air Conferences’ (golf)!”