posted in HISTORY UP CLOSE on September 4, 2014

On Christmas Eve 1935, Rear Admiral Ernest J. King, the Chief of the Bureau of Aeronautics, informed the Naval Aircraft Factory in Philadelphia that the Navy wanted it to proceed with construction of a prototype for a new primary trainer. The decision came just months after the first aviation cadets, part of a new program to expand the ranks of naval aviators, reported to Naval Air Station (NAS) Pensacola, Florida, for flight training. As the years unfolded all naval aviation cadets, along with their commissioned officer counterparts as well as enlisted naval aviation pilots, received part of their training in the aircraft King addressed that day. When war came to the United States in December 1941, vaulting King to the positions of Chief of Naval Operations and Commander in Chief, United States Fleet, these were the aviators on the front lines fighting the Axis powers. 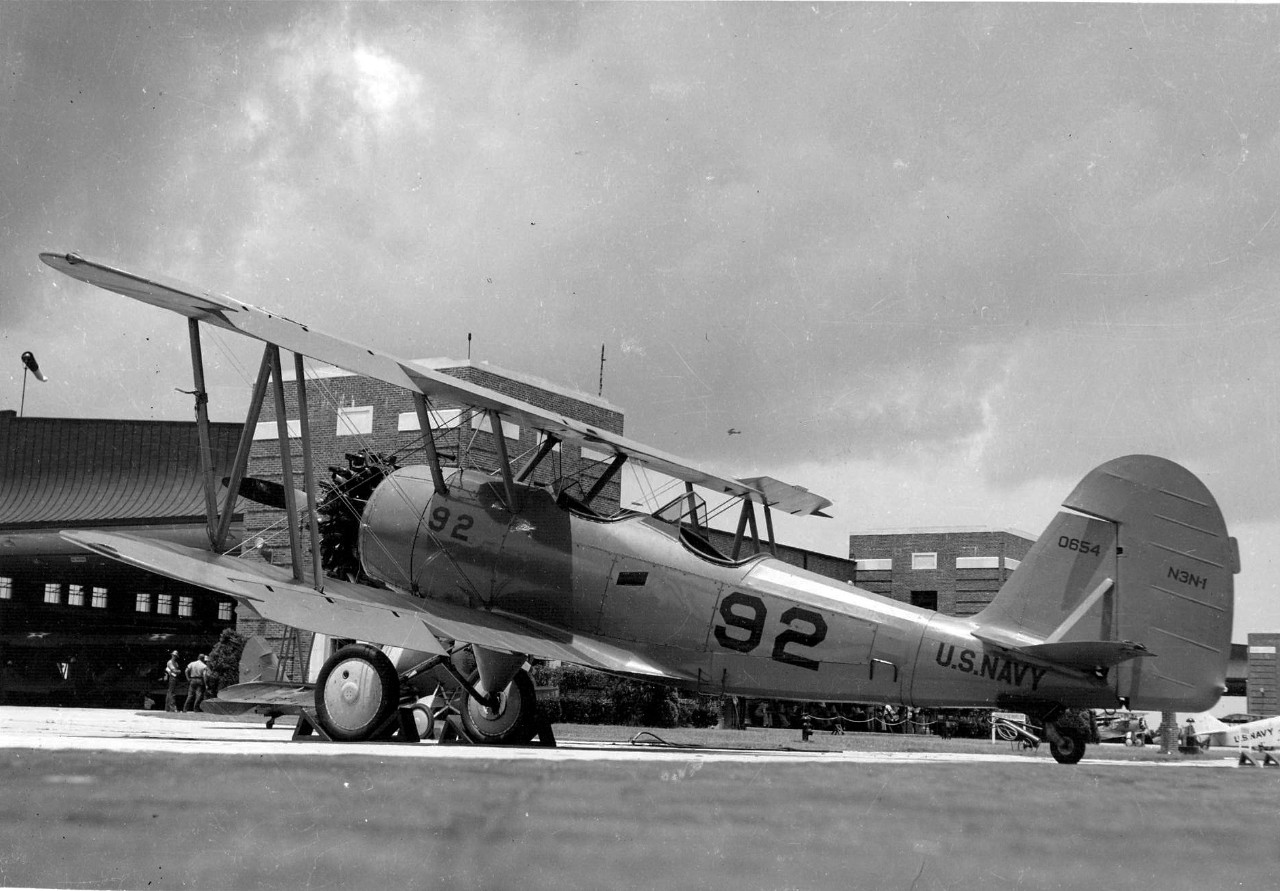 With the influx of new trainees coupled with a shortage of trainers for them to fly, the development of the trainer that became known as the N3N received high priority and proceeded swiftly. A mock-up was ready by March 1936, and by August the prototype was ready for its maiden flight. As a primary trainer, the airplane was not complex, but it did include some unique design features, notably aluminum construction and removable side panels on the left side of the fuselage that allowed for easy inspection of the airplane’s internal structure. Interestingly, the tail section, with a large rounded vertical stabilizer that was the trainer’s most prominent physical feature, was connected to the fuselage by just four bolts! However, the tail proved to be heavy, affecting the airplane’s performance and the location of the fuel tank in the middle of the fuselage caused fear of fatalities in the event of crashes, which were not uncommon in primary training. Flight testing of the prototype, XN3N- 1 (Bureau Number 9991), at NAS Pensacola consisted of 49 flights totaling 44.1 hours. Test pilots made a number of recommendations for changes to the design, ranging from lengthening the control sticks by 2 inches to providing drainage plugs for the main float on the seaplane version of the airplane. They reported that “The airplane was found to have satisfactory flying characteristics and to be satisfactorily controllable and stable in the air, both as a seaplane and landplane; exceptionally maneuverable and free of spray on the water as a seaplane, and satisfactorily maneuverable and controllable on the ground as a landplane.”

The first production N3N-1s were delivered beginning in June 1936, launching a production run that would total 998 airplanes, the most numerous of which was the N3N-3, which differed from the early versions in the redesign of the tail, removal of the engine cowling, and incorporation of single strut landing gear. What was common to most all N3Ns, regardless of version, was the color, which prompted the nickname “Yellow Peril.” Although it was oftentimes applied to all primary trainers with that particular hue, the nickname was most associated with the N3N. 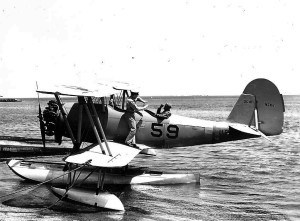 An instructor demonstrates a maneuver to a student while standing on the wing of an N3N-1 on the shore at Naval Air Station (NAS) Pensacola, Florida.
Download

As the first airplanes went into service at NAS Pensacola, flight students and instructors alike looked forward to flying the N3N, which in appearance was much more “cleaned-up” than the NY it was designed to replace in the words of the Bureau of Aeronautics Newsletter. Additionally, the N3N boasted a complete set of instruments in each cockpit, an advance over the NY’s air-cooled altimeter and engine gauges, though the rear-windshield of the new trainer was “found so inefficient in shielding the student from windblasts resulting from slips and skids” that NY windshields were put on the rear cockpits of the N3Ns.

“The size and build of the airplane reminds me of Dad’s Diamond T [pick-up truck],” one cadet wrote to his parents in describing his first experience flying a landplane N3N in 1943. “The plane lands nicely, tail first for the Navy, and a smooth landing isn’t necessarily a perfect one…She stalls and spins beautifully.” Another pilot may not have agreed with the latter assessment. In 1938, an instructor at NAS Miami was giving a student an introduction in spin recovery at an altitude of 5,000 ft. when all efforts to come out of a spin failed, the airplane descending to 1,700 ft., at which time student and instructor prepared to jump. The former weighed 212 lb. with his parachute and when he stood up to bail out, the plane changed motion and the pilot was able to recover from the spin at an altitude of 1,000 ft. In standing up, the student had shifted the center f gravity, unwittingly helping to save the airplane from destruction.

Ironically, it would be on the ground that the N3N proved at its most perilous, the long nose of the airplane making visibility difficult during taxiing on the runway. 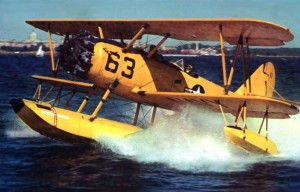 An N3N-3 splashes through the waters of the Severn River with the buildings of the U.S. Naval Academy visible in the background. Photograph by Howard Levy courtesy of Joseph G. Handelman.
Download

At peak service, the buzzing of the engines of N3Ns permeated the skies at Navy training stations across America, their distinctive yellow color drawing attention on flight lines and in the air. A generation of naval aviators made milestone flights in them, including their first solos, on the path to the front lines in more advanced combat types. One would have expected that the end of World War II would bring the end of the N3N’s flying days, and to a great extent it did, with most all of them stricken from the Navy’s inventory, many purchased by civilians for use as crop dusters.

However, a small number remained in service, still training young men in Navy blue to fly at Naval Air Facility (NAF) Annapolis, Maryland. Seemingly out of place in the jet age, a collection of seaplane versions of the N3N performed aviation indoctrination for Naval Academy midshipmen from 1946 until their retirement from those duties in 1959. Midshipmen typically made eight flights in the “Yellow Perils,” the hops in the open-cockpit biplanes memorable to all who experienced them in the skies over Annapolis in the swan-song for biplanes in naval aviation. 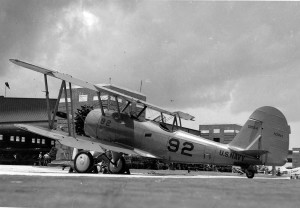 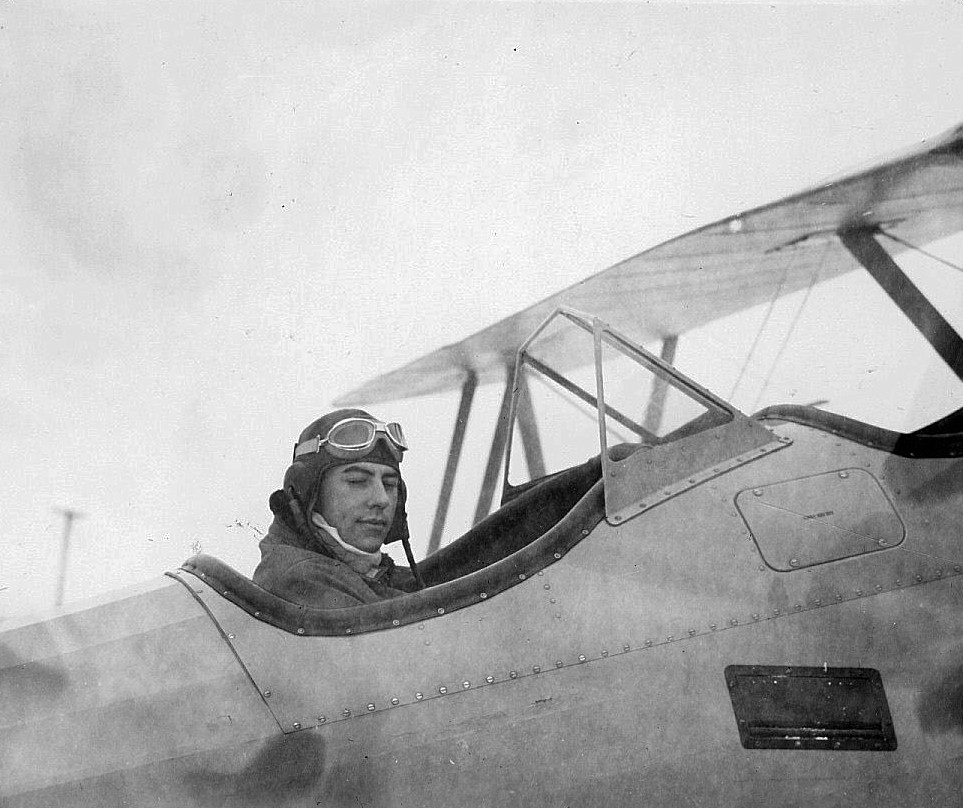 Among those who trained in an N3N was future Marine aviator Richard Fleming, who received the Medal of Honor posthumously for actions during the Battle of Midway. This photograph was taken at Naval Reserve Aviation Base (NRAB) Minneapolis, Minnesota, in 1940.
Download 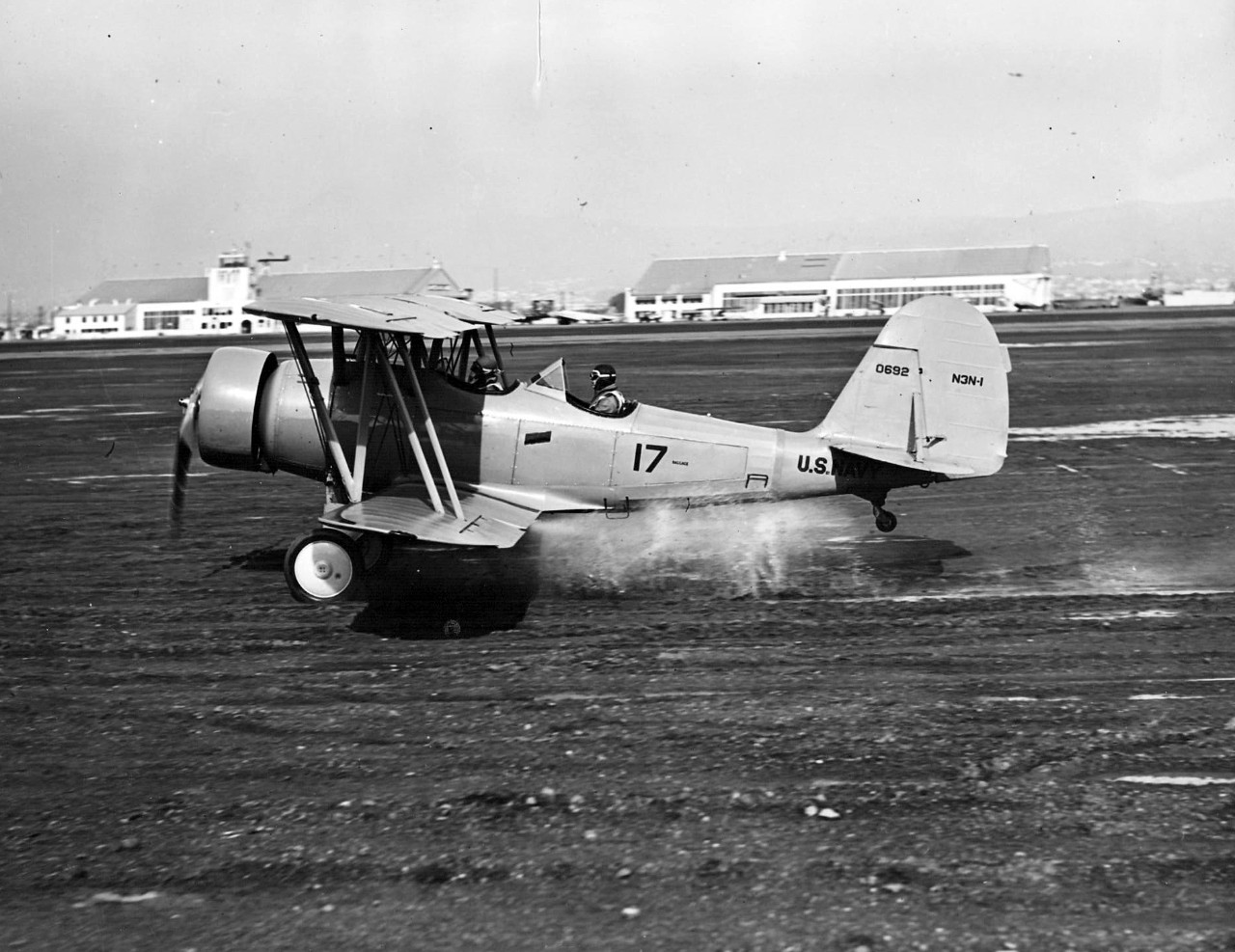 An N3N-1 trainer pictured taking off at Naval Reserve Aviation Base (NRAB) Oakland, California, circa 1940.
Download 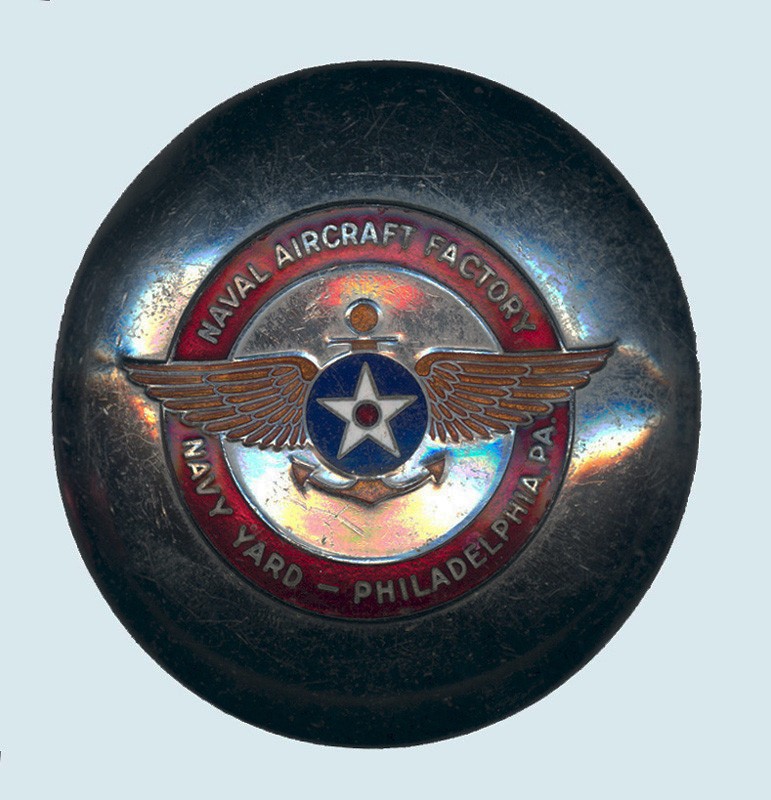 This cover was used on the propeller shaft of an N3N-3 and featured naval aviator wings with the national insignia painted on aircraft as their centerpiece.
Download 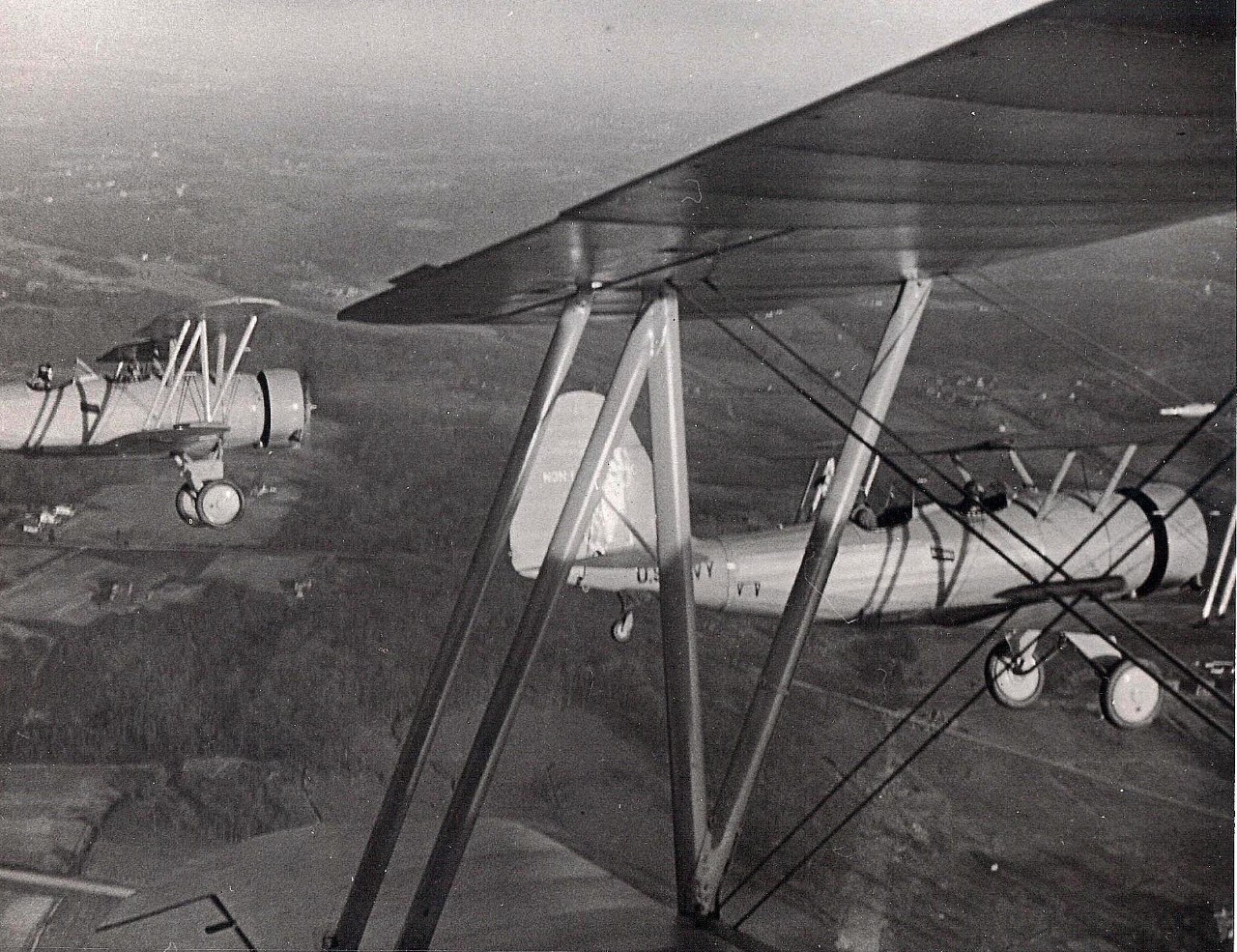 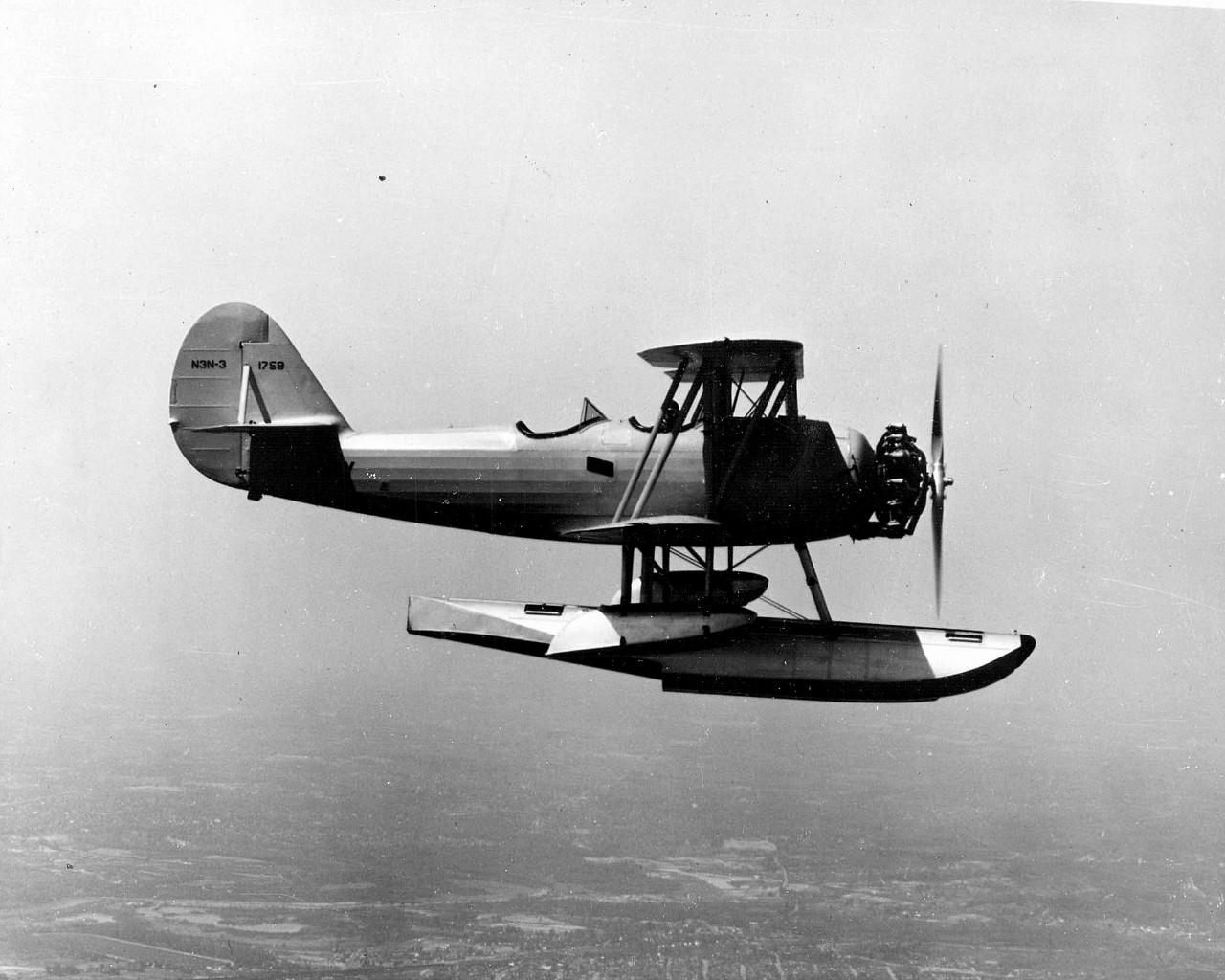 An N3N-3 trainer pictured in flight over the Pennsylvania countryside during a flight from the Naval Aircraft Factory in Philadelphia.
Download 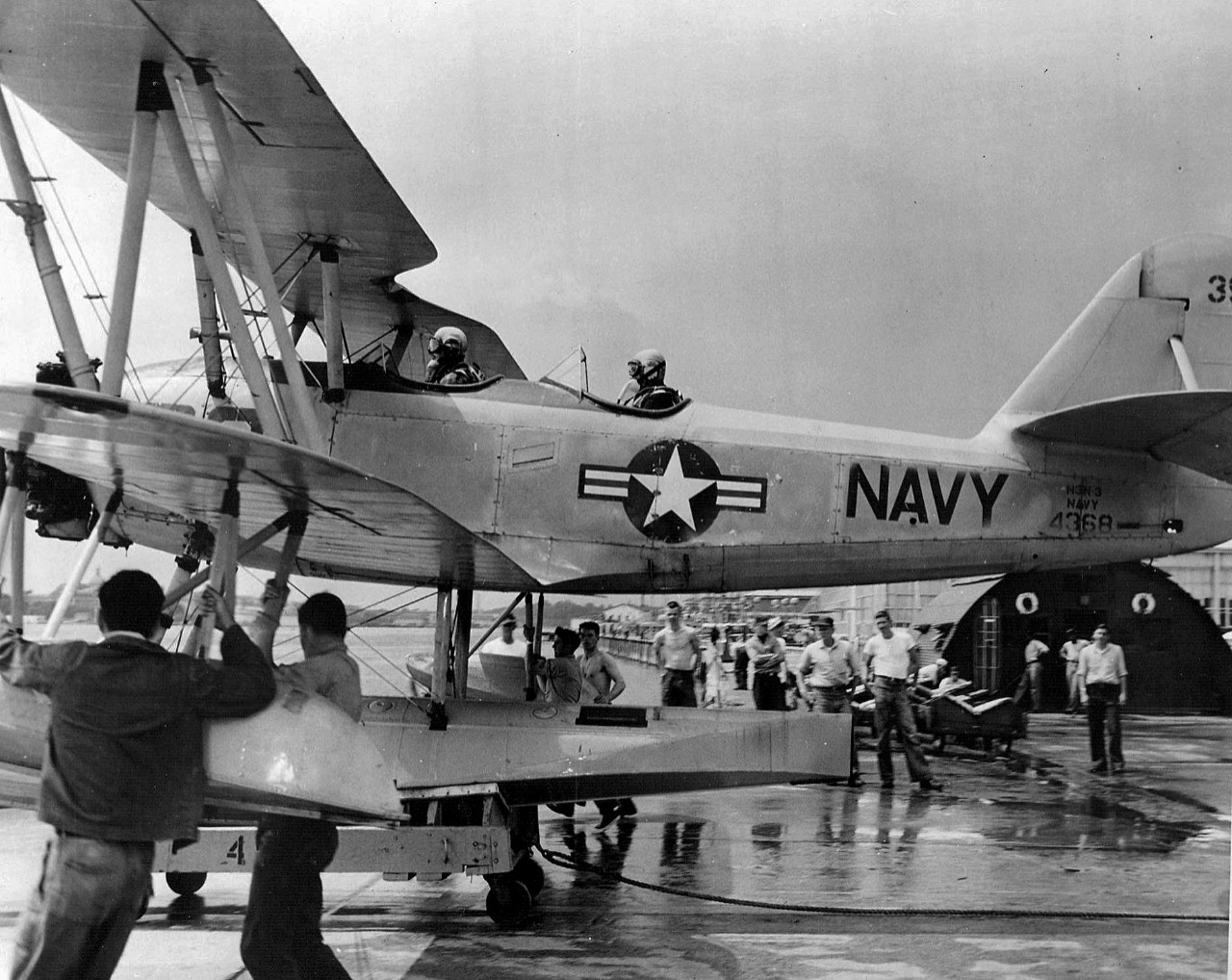 N3N-3 ON THE SEVERN RIVER 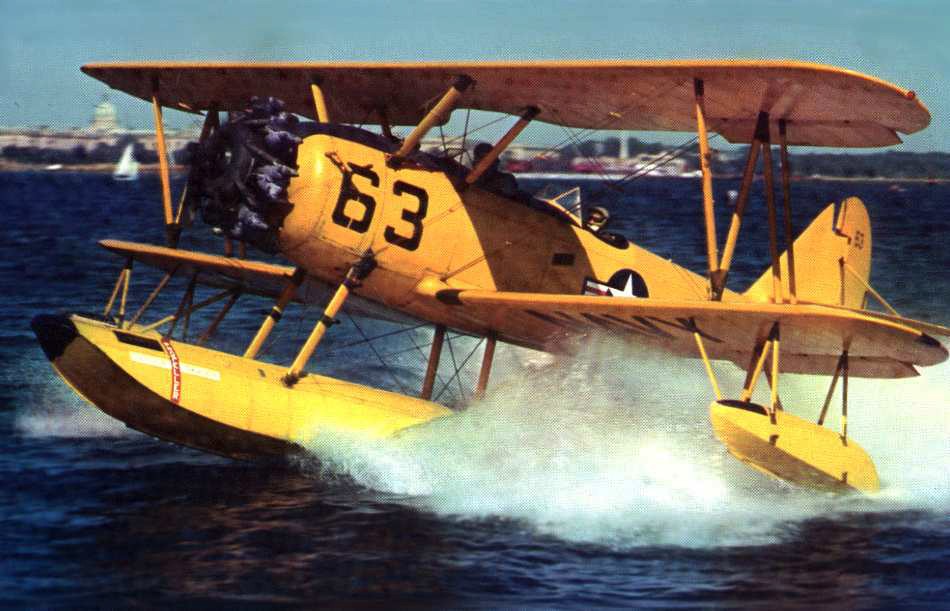 An N3N-3 splashes through the waters of the Severn River with the buildings of the U.S. Naval Academy visible in the background. Photograph by Howard Levy courtesy of Joseph G. Handelman.
Download