Seventy-two years ago, Americans on the home front celebrated the holiday season against the backdrop of world war, the empty chairs at dinner tables reminders of loved ones far away and the Christmas spirit and hopes for the new year centering on victory. 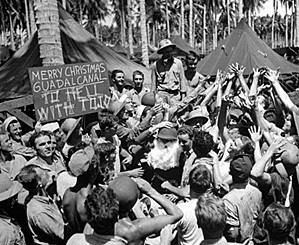 In December 1942, as Americans celebrated what in more peaceful times was the joyous occasion of Christmas and the welcoming of a new year, they did so against the backdrop of a more somber anniversary, the seventh day of the month marking one year since Japanese aircraft unleashed their ordnance on Pearl Harbor and surrounding installations. Much had happened since that time—the surrender of the gallant defenders of Wake Atoll, the battles of Coral Sea and Midway, the epic struggle against the Japanese on Guadalcanal, and most recently the Allied landings in North Africa. As President Franklin D. Roosevelt remarked in his Christmas address to the nation, “”I cannot say Merry Christmas for I think constantly of those thousands of soldiers and sailors who are in actual combat throughout the world…Happily the star of Christmas again shines bright in the world black with war and hate.” An Associated Press reporter captured the times on a more personal level. “There was peace on earth and goodwill toward men in the security of millions of American homes and churches today, but… there were many vacant seats and absent faces.”

Indeed, just scanning the pages of American newspapers from around the country reflected the changes wrought by the war when it came to the absences of loved ones. For the first time in 21 years, Private James E. Rynerson of Salt Lake City was away from home on Christmas Day, which was also his birthday. A Buick car dealership in San Antonio took out an advertisement in the paper urging citizens to purchase war bonds, the copy including a list of nineteen former employees in military service. Sadly, the newspapers also carried news of the losses of war, a report out of Pensacola revealing that a former Ole Miss football star, Aviation Cadet Homer L. Hazel, had died in a plane crash, an all too frequent occurrence in the inherently dangerous business of flying. At other homes around American, dreaded telegrams arrived, suddenly transforming “Blue Star Mothers” into “Gold Star Mothers.” 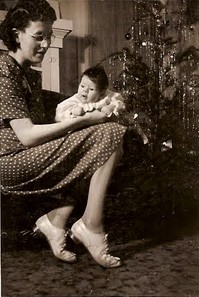 The Arsenal of Democracy was in full swing after a year of war, the Navy alone having expanded from 790 to 1,782 ships in just over a year. Among them were small patrol torpedo boats, the actions occurring in December 1942, including the turning back of a force of Japanese destroyers attempting to land reinforcements on Guadalcanal by eight of the smallcraft. Among them was PT-109 destined to be commanded by a future President of the United States, Lieutenant (junior grade) John F. Kennedy. In addition to Kennedy, by December 1942, four other future chief executives were in uniform. Four of the future Presidents wore Navy blue (Dwight D. Eisenhower was an Army general), part of a seagoing force that numbered 1.2 million by the end of 1942 compared to some 383,000 on the day Pearl Harbor was attacked. One of these servicemen was Naval Reserve Lieutenant Alexander R. Walsh of Newport, Rhode Island, who described enduring an air attack in a letter to the folks back home. “They come in black, shiny, and ominous looking and they come in like the devil. Everyone opens up on them and suddenly they burst into flames. You can’t see them get hit, but when you see that long flame behind them, you know that is one less you have to worry about.”

As December prepared to give way to January, Americans could not know the exacting price the war was still to take and the long road ahead. Yet, as the Associated Press reported, a poem written by an Iowa mother demonstrated an understanding of the gifts all those on the home front wished to receive.

“Johnny, my big boy, is ‘over there’
He hasn’t written what he’d like
Take care of him, Santa, as you did
When he was a sassy little tike!
And me?- Well bring me victory!”