posted in AIRCRAFT IN THE SPOTLIGHT on October 17, 2013 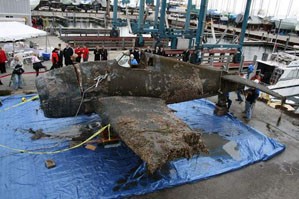 Over the course of more than two decades, the National Naval Aviation Museum’s underwater recovery program in Lake Michigan, site of World War II carrier qualification operations on board the training carriers Wolverine (IX 64) and Sable (IX 81), has yielded bountiful treasure in the form of vintage World War II airplanes. From the depths have come aircraft types thought lost to history, notably the sole example of an SB2U Vindicator, and those that before their untimely ditching in the lake waters faced the trials of combat. Joining the latter category in 2009 was F6F-3 Hellcat (Bureau Number 25910), one of over 12,000 fighters of its type built by Grumman Aircraft Engineering Corporation during World War II.

At the time of its recovery, the airplane had spent some 64 years underwater after making its final flight on January 5, 1945. On approach to Sable, Lieutenant (junior grade) Walter B. Elcock allowed his starboard wing to drop, hitting the deck at an angle. His Hellcat went off the edge of the flight deck, hanging by its tailhook for a few minutes before it slipped from the arresting wire and plunged into the water. He was able to swim to safety, but the event marked an end for the fighter aircraft’s flying career begun less than two years earlier.

Entering fleet service in July 1943, Bureau Number 25910 joined Fighting Squadron (VF) 38, a unique squadron in the annals of the wartime Navy in that it was one of only a handful of land-based Navy fighter squadrons to operate the F6F Hellcat. VF-38 flew its first combat missions in the Solomon Islands just over two weeks after carrier-based squadrons introduced the F6F to combat in a strike against Marcus Island on August 31, 1943. 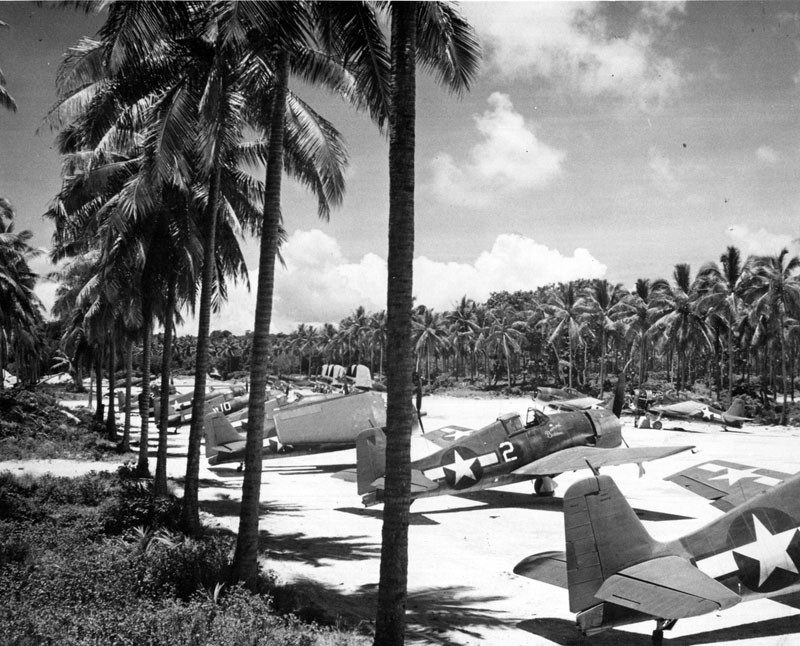 To say that the Navy got its money’s worth out of VF-38 would be an understatement according to a copy of an official report of its three combat tours between September 1943 and March 1944. It notes that the twelve-plane squadron flew a total of 1,266 sorties totaling 4,276 hours. The ten pilots who flew over the course of the entire 15 and one half weeks of combat averaged 81.7 combat sorties, and 278.7 flight hours per pilot. All told, VF-38 destroyed seventeen barges, a cargo vessel, and seven smaller craft and conducted numerous damaging strafing runs against enemy personnel, vehicles, and antiaircraft positions. In air-to-air combat, the ultimate test for a fighter squadron, VF-38 was credited with shooting down twenty-two enemy planes, the nature of these actions captured in a September 1943, action report. “The fight lasted between 15 and 20 min. Shortly after they were jumped, [LTJG] Cornell had a full deflection shot at a Zeke. It was a short burst, but flames spurted up in the cockpit and the [enemy plane] rolled slowly and disappeared. He took another deflection shot, a long burst, at another Zero and came up on the enemy plane so fast he had to tip up a wing to avoid running in to him.” His plane hit by enemy fire, Cornell exited the target area and headed for home, but his oil line had been cut and the propeller began going out, which prevented him from landing his plane. He made a water landing and was picked up by a crash boat. “He was especially thankful for his [aircraft’s] armor plating,” the after action report noted, “reporting about a dozen hits by 7.7 [millimeter] bullets, which did not defeat the armor.”

The action reports list names and statistics, revealing little about the flights of any individual airplane, though surviving log books of former VF-38 pilots tell part of the tale. Lieutenant Oscar Chenoweth, the squadron executive officer, made 4 flights in Bureau Number 25910, including an August 29, 1943, carrier landing on the deck of the escort carrier Breton (CVE 23), his seventeenth trap. Though pilots never flew the same aircraft on every mission, Lieutenant (junior grade) Theodore Condo had a propensity for finding his way into the cockpit of Bureau Number 25910, his log book noting a total of 27 flights in the aircraft. Among them were missions escorting strikes against Ballale, an island south of Bougainville that was the site of a Japanese airfield. On September 18, 1943, Condo flew the plane on combat air patrol over ships supporting the invasion of Vella Lavella. Yet, perhaps the most interesting flights he made in Bureau Number 25910 occurred on September 20, 1943, between Guadalcanal and Munda, when he flew escort on a plane carrying Vice Admiral William F. Halsey, Commander, South Pacific Force to and from meetings with some of his subordinate commanders. 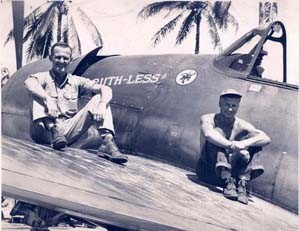 In addition to information in official records and news reports, contact made with the families of former squadron members has stirred poignant memories and provided appreciation for husbands and fathers. Betty McCoy, the widow of Lieutenant (junior grade) Richard W. Moore, who named his assigned aircraft in honor of his wife, wrote, “I can remember the day they left from Otay Mesa, the field near San Diego, California. The squadron flew their planes to the ship the night before and were confined to the ship until they left the next morning. Three of we wives were on the shore watching the ship leave. You can imagine the tears that were shed that day.” “My Dad never spoke of his combat experience during the war. Flying yes, but that was it,” wrote the son of VF-38 pilot Allen B. Thompson. “It wasn’t until after his passing and finally reading through his logbooks that we fully understood what he experienced as a young man.” Fittingly, the first person to sit in the cockpit of the plane after its recovery was Hunter Brawley, grandson of the aviator who ditched the plane on its final flight. These individuals of a more recent generation can now have a fuller appreciation of the airplane in which young men they knew as older men winged their way into history.

Recovery and restoration of this aircraft, which took nearly 15,000 hours of painstaking work, was funded by the Taylor family of Enterprise Rent-A-Car. Company founder Jack C. Taylor, a former naval aviator, served aboard the aircraft carrier Enterprise (CV 6) flying F6F Hellcats during World War II. In 1957, he founded what was to become Enterprise Rent-A-Car, naming it for the famous ship.