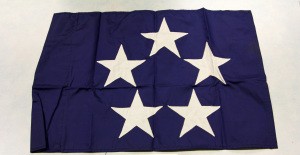 Flags of various sizes and significance are part of the historic collection of the National Naval Aviation Museum.  They include examples of the Stars and Stripes, including the tattered national ensign flown over the carrier Bunker Hill (CV 17) when she endured an attack by kamikazes during World War II, to a U.S. Navy flag that was carried into orbit on the first Space Shuttle mission launched following the Challenger explosion.  One flag recently received into the collection is small in size, but represents a stature achieved by few officers in the history of the U.S. Navy.

In December 1944, an Act of Congress created the ranks of General of the Army and Fleet Admiral, with four men from each service promoted to that rank.  This created parity between senior American officers and their British counterparts, with the respective services of the United Kingdom having existing five star ranks of Field Marshal, Admiral of the Fleet, and Marshal of the Royal Air Force.  Admirals William F. Leahy, Ernest J. King, Chester W. Nimitz, and William F. Halsey, Jr., were the U.S. Navy’s selections for promotion to fleet admiral.  In the Navy, admirals of any rank are called flag officers.  The flags for this new rank featured five white stars in the shape of a pentagon set against a field of blue.

For the rest of their lives, even after leaving active duty, these fleet admirals were honored with the flying of their flags when they flew on Navy aircraft, boarded ships, or visited military installations.  Such was the case in 1959 when CAPT Michael Dolan, USN (Ret.) was on active duty as a young officer flying in the so-called Zebra Division of Fleet Tactical Support Squadron (VR) 1 at Naval Air Station (NAS) Patuxent River, Maryland.  He flew R6D-1Z Liftmasters, the Z in this version of the aircraft meaning they were configured for VIP transport, hence the term Zebra Division for the crews that transported senior admirals and high-ranking civilian officials.

That summer, Dolan and his crew were called upon to fly Fleet Admiral Halsey to Hollywood, California, where he was serving as consultant on the film The Gallant Hours, which told the story of his service as Commander, South Pacific Area and South Pacific Forces during a pivotal time in the Guadalcanal campaign in 1942.  James Cagney portrayed Halsey in the film.  “I’ve had to unlearn all the tricks and shortcuts I’ve collected over the years,” the actor commented at the time of filming.  “The truth is that Halsey is such a direct, no-nonsense guy that any mannerisms would seem phony.”

During the trip, the crew carried a small five-star flag that flew above the pilot’s side of the cockpit and was always visible when the airplane was taxiing or moving on the airport tarmac while Fleet Admiral Halsey was on board.  Following the mission, Captain Dolan kept the flag as a souvenir.  Halsey died on August 16, 1959, never having the opportunity to see Cagney’s portrayal of him, the small flag one of the last to fly in his honor.