posted in AIRCRAFT IN THE SPOTLIGHT on October 02, 2012 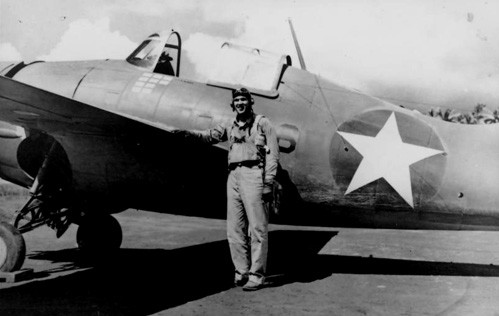 Marine Second Lieutenant Thomas H. Mann, Jr., took to the air with the confidence of an experienced combat pilot on the morning of November 11, 1942. It was not the first time he had been at the controls of a mud-splattered F4F Wildcat as it climbed into the skies over the jungle landscape of Guadalcanal. Since arriving on the island the previous September, flying first with Marine Fighting Squadron (VMF) 224 and then VMF-121, he had become an ace, shooting down or sharing in the kills of five Japanese aircraft.

On this day commemorating the end of one world war, Mann set about doing his part to win another as he climbed to altitude to meet a formation of Japanese Aichi Type 99 dive bombers intent on bombing supply ships lying at anchor in the waters off Guadalcanal. Flying at an altitude of 18,000 ft., he and other members of his section spotted the enemy planes 6,000 ft. below them, and seizing upon their altitude advantage, pounced on their quarry, with Mann splashing two while they flew in formation and shooting down a third as it attacked an American destroyer, the bomb splashing on one side of the ship and the enemy plane spinning into the water on the other side! Now at low level, Mann aggressively pursued another dive bomber when he suddenly felt shrapnel hitting the left side of his body. “[A] dive bomber on my left turned into me and shot me down,” Mann later recalled of the moment his luck ran out. “I crashed in the water about halfway between Savo and Tulagi Islands.” In the days before shoulder straps were standard equipment on F4F Wildcats, water landings were hazardous for the pilot owing to the fact that the aircraft’s gunsight was positioned above the instrument panel, the force of a ditching sending the pilot’s face right into it. As a result, Mann lost seven teeth, a pain that probably equaled the wounds from a Japanese machine gun.

Inflating his Mae West life vest, Mann made his way towards one of the small islands in the Tulagi group located across “Ironbottom Sound” from the northern shore of Guadalcanal. Reaching shore, he lay exhausted from the swim when two natives came upon him. Boarding their dugout canoe, Mann soon found himself en route to their village, where one of the natives was able to communicate with him using broken English he had picked up while serving as a house boy for a missionary.

For the next seven days, Mann lived among the villagers, who used a home remedy of leaves and roots from the jungle boiled in water to treat his shrapnel wounds. Though it tasted terrible, Mann also rinsed out his mouth and upon his return to he showed no signs of infection. Despite being in a primitive environment, Mann ate better than he ever had on Guadalcanal, “the fruits, baked fish and meats…like gourmet foods even without my teeth.”

Seven days after being shot down, Mann began the journey back to Guadalcanal in a large dugout canoe rowed by 22 natives. He arrived wearing a Japanese uniform, having traded his flight suit to his native rescuers. While he was away, the U.S. Navy and Imperial Japanese Navy had waged the climactic Naval Battle of Guadalcanal, victory in which effectively spelled the end of Japanese efforts to recapture the island. For his service in the campaign, Mann would receive the Navy Cross.