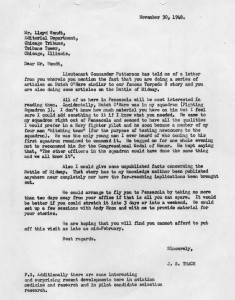 Less than three months after the Japanese attack on Pearl Harbor, with the tide of Japanese conquest sweeping across the Pacific Ocean, Americans were in desperate need of good news.  On February 20, 1942, in the cockpit of an F4F Wildcat of Fighting Squadron (VF) 3, Lieutenant Edward H. “Butch” O’Hare provided the nation and Navy a much needed morale boost in the skies off Rabaul.  With his wingman forced to return to the carrier Lexington (CV 2) when his aircraft experienced mechanical problems, O’Hare was left to combat an incoming attack of Japanese G4M bombers.  At the time he was credited with shooting down five of them and damaging a sixth in defense of Lexington.  His commanding officer at the time was Lieutenant Commander John S. “Jimmy” Thach, who in a letter to a newspaper editor written after World War II related some information about O’Hare, who was declared killed in action later in the war.