posted in HISTORY UP CLOSE, UNCATEGORIZED on November 14, 2014 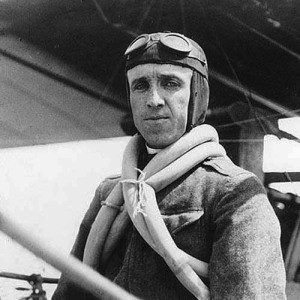 In studying the early history of naval aviation, civilian pilot Eugene Ely’s performance of the first ever landing on board a Navy ship is viewed as a defining moment for naval aviation literally and symbolically, the “arrested” landing using ropes and sandbags the foundation for carrier flight operations that have become the essence of naval aviation. Somewhat overshadowed is what occurred two months before on November 14, 1910, when Ely successfully took off from the cruiser Birmingham (CL 2) as she lay at anchor in Hampton Roads, Virginia.

This landmark flight was the brainchild of Captain Washington Irving Chambers, the Navy officer tasked with overseeing aviation matters for the sea service, and pioneer aircraft manufacturer Glenn Curtiss. From meetings at air meets at Belmont Park in New York and Halethorpe, Maryland, in October 1910, emerged a plan to fly an aircraft from a U.S. Navy ship, which for Chambers would demonstrate the value of airplanes to naval operations and for Curtiss would hopefully drum up business. In fact, ever the astute entrepreneur, Curtiss was already engaged in arranging a ship to shore demonstration. Teaming with one of his early associates, John McCurdy, he had convinced the publishers of the New York World to offer a prize of $5,000 to the first pilot to fly an aircraft from the deck of a Hamburg-American Line ship at sea carrying a bag of mail and deliver it over a distance of fifty-miles to New York City. Accidental damage to the aircraft just prior to take off thwarted this flight attempt on November 11, 1910.

Meanwhile, further south at the Norfolk Navy Yard, the sound of hammers could be heard on board Birmingham as carpenters assembled a wooden flight deck measuring 85 ft. long and 24 ft. wide on the bow of the cruiser. Eugene Ely arrived in Norfolk with his airplane on November 13th, and the following morning he watched as sailors gently lifted and placed it on the improvised flight deck. “ELY READY TO FLY FROM BATTLESHIP” a New York Times article erroneously recorded, stating that Ely saw no additional danger flying over water. Nevertheless, he had fitted his biplane with light pontoon floats in the event that he was forced down on the water. 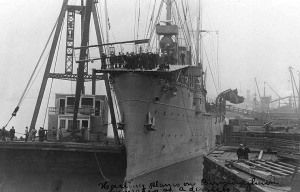 Crewmen load the Curtiss pusher aircraft in which civilian pilot Eugene Ely made the first take off from a U.S. Navy ship onto the temporary wooden flight deck on board the cruiser Birmingham (CL 2).
Download

When Birmingham got underway before noon on November 14, 1910, the plan was to steam into the Chesapeake Bay and, while underway, launch Ely, who would fly his plane a distance of approximately fifty miles. Yet, as the cruiser reached the waters off Old Point Comfort, the weather became a factor, with light wind, fog, and rain. Not until 3:00 pm, as Birmingham lay at anchor, did the weather begin to clear. Seizing the opportunity, Ely climbed aboard his flying machine, making the decision to take off despite the fact that Birmingham was not underway, which negated any extra lift he would have gotten from wind going over the deck. At about a quarter after the hour, the plane began its take off run down the deck, which included a five degree angle down, its end just 37 feet above the water.

Feeling his wheels leave the deck, Ely instinctively dove towards the water in an effort to accumulate speed, but miscalculated, which resulted in his wheels and propeller striking the water, the latter described by a newspaper account as looking like “a heavy coarse saw had gone along its edge.” Hitting the water also caused saltwater to spray over Ely’s goggles, obscuring his vision for a time. With a damaged plane and the primary purpose of the flight—demonstrating an airplane could take off from a ship—proven, Ely sought put down on dry land as quickly as possible, landing on a beach not far from Fort Monroe after less than 5 minutes in the air during which he had flown a distance under 3 miles.

The flight completed, newspaper reports conveyed the personality of the daring young flier. One noted his willingness to fly in bad weather was the result of his desire to prove more of what had been expected of him, another commenting on his performance of the flight even though he was none too fond of the water.

The gravity of what was accomplished on that November day was not lost on a reporter for the Indianapolis Star, who noted, “Aerial navigation proved today that it is a factor which must be dealt with in the naval tactics of the world’s future.” That the future was close at hand was proven the following month when Secretary of the Navy George Meyer issued a report calling for funding for further experimentation with aircraft, which he viewed as having the potential for value as scouts for the fleet. Indeed, it would be in the scouting role that the airplane gained entry into fleet operations.