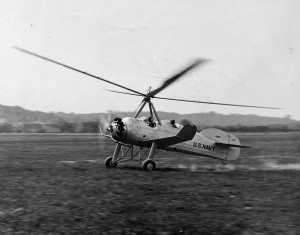 In modern naval aviation few aircraft are as interesting to watch fly as the MV-22 Osprey, its unique tilt rotor system allowing it to fly either as a conventional aircraft or helicopter depending on the rotation of its engine nacelles. No less unusual to see in operation for those who lived in the 1930s were the autogiros introduced in the United States by Harold Pitcairn. A graduate of Curtiss and Army Air Corps flying schools, Pitcairn developed an interest in autogiros after observing the work of Spanish engineer Juan de la Cierva, who designed the technology that enabled the construction of the first autogiros during the 1920s. Specifically, he developed the articulated rotor characterized by blades free to move at a speed independent of the machine as a whole. In the autogiro, essentially a fixed-wing aircraft with a conventional nose-mounted engine, the blades rotated under the aerodynamic pressure of the wind produced by the aircraft in flight and were wholly independent of the engine’s power. The rotor produced 80% of the autogiro’s lift at forward speed and 100% of the lift in a vertical descent. The advantage of the design was its ability to take off and land in short distances.

After acquiring one of Cierva’s designs for evaluation in 1928, Pitcairn purchased U.S. rights to Cierva’s autogiro the following year and began production under the banner of Pitcairn-Cierva Autogiro Company. In the Golden Age of aviation in which new aircraft had a relatively brief moment on stage, the makers of the Pitcairn-Cierva autogiros took advantage of their opportunity, demonstrating them at the Cleveland Air Races and landing one on the White House lawn on the occasion of President Herbert Hoover’s presentation of the Collier Trophy to Harold Pitcairn. Additionally, the most famous aviatrix of the day, Amelia Earhart, took the controls of an autogiro, establishing a world altitude record for that type of aircraft by reaching 18,415 ft. on April 8, 1931. 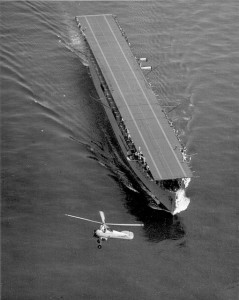 The XOP-1 pictured in flight over the aircraft carrier Langley (CV 1) in 1931.
Download

That same year the Navy procured the first of what would eventually be three autogiros from Pitcairn-Cierva, designating them XOP-1s. Delivered to the Flight Test Section at Naval Air Station (NAS) Anacostia, D.C., with Assistant Secretary of the Navy for Aeronautics David S. Ingalls and Chief of the Bureau of Aeronautics Rear Admiral William A. Moffett on hand, the autogiro soon was being put through its paces by veteran Navy test pilots, the goal being to evaluate the possibilities of their use for reconnaissance work over terrain where adequate landing fields did not exist. “After a very large amount of flying compared to the normal testing project,” the Bureau of Aeronautics Newsletter noted in August 1931, “the Autogiro is finally nearing the end of its test status. The first flight, almost every morning for weeks, has been a climb and glide study of the ‘windmill.’” The ultimate test would come at sea on September 23, 1931, when Lieutenant Alfred M. Pride piloted an XOP-1 in three successful landings and takeoffs on board the carrier Langley (CV 1), the first U.S. Navy shipboard rotary wing operations.

Little mention of the XOP-1 appears with respect to the Navy after this date, though the Marine Corps field tested the type during operations in Nicaragua, finding that it was not safe for flight when carrying a load of 200 lb. or greater. Yet, its brief period of operation stands as a milestone in naval aviation history when the sight of spinning rotor blades first appeared to sailors and Marines.