posted in AIRCRAFT IN THE SPOTLIGHT on February 13, 2013

Among the first A3D-1s to join the fleet was Bureau Number 135418, one of the aircraft currently on display at the museum, which was accepted by the Navy on July 30, 1956. The twenty-fourth production A3D-1 delivered to the Navy, the aircraft joined Heavy Attack Squadron (VAH) 1 at Naval Air Station (NAS) Jacksonville, Florida, on August 3, 1956. Established in November 1956, the squadron was the first to receive the Skywarrior, and Bureau Number 135418 was among the aircraft that helped qualify the first pilots and navigators that would operate the new bomber. The airplane remained in VAH-1 until early-1958, a time period that included the squadron’s embarkation on board the carrier Forrestal (CVA 59) in the first deployment of both the ship and the A3D. In 1958, the airplane joined VAH-3 and went to sea on board Franklin D. Roosevelt (CVA 42), which turned out to be the only cruise the squadron ever made flying A3Ds. Thereafter, the squadron served as the A3D fleet replacement squadron at NAS Sanford, Florida, and Bureau Number 135418 spent many hours in the skies over Central Florida qualifying aircrews.

In August 1959, Bureau Number 135418 became part of the “Whidbey Whales,” joining VAH-123 at NAS Whidbey Island, Washington. The squadron, redesignated Heavy Attack Unit, Pacific, served as the fleet replacement squadron for all West Coast A-3 Skywarrior pilots and aircrewmen, and into September 1963 the museum’s Skywarrior served again as an aerial classroom, its lesson plan broadened in 1961 to include low-level navigation and loft bombing. Thus, a significant number of men assigned to fly A3D Skywarriors during the period March 1959 and September 1963, probably flew the aircraft on display.

Sent to Litchfield Park, Arizona, on September 30, 1963, Bureau Number 135418 was eventually pulled from the bone yard and assigned to Naval Missile Center (NMC) Pt. Mugu, California. Designated an NA-3A, it supported testing of missile and electronic warfare systems. Offered to the Naval Aviation Museum in September 1974, the aircraft arrived in Pensacola later that year. 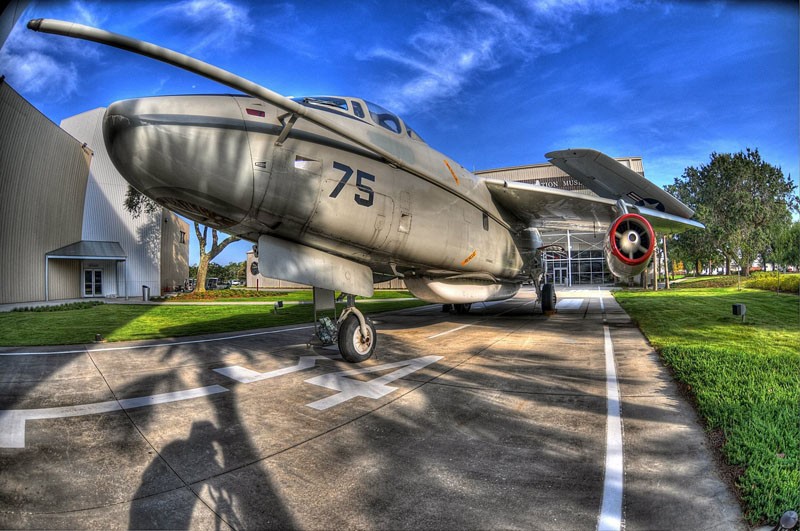 The museum’s NEA-3B Skywarrior (Bureau Number 144865) entered fleet service in 1961 as an A3D-2T (later TA-3B), a training version that featured a pressurized compartment in place of the bomb bay, where an instructor and four students could conduct bombardier-navigator training. It was later one of five TA-3Bs converted into a VIP transport, the pressurized compartment used as a passenger cabin. In this role, the museum’s airplane served in Transport Squadron (VR) 1 and flew the Chief of Naval Operations and other high-ranking officials. After flying in this role, the aircraft underwent conversion to the EA-3B configuration, which involved the installation of an array of sophisticated electronic countermeasures (ECM) gear. With a crew of seven, including four ECM specialists working in the pressurized compartment, the museum’s airplane flew with Fleet Air Reconnaissance Squadron (VQ) 2 at Naval Station (NS) Rota, Spain, a period which included combat missions in Operation Desert Storm.

After its front line service concluded, the airplane was redesignated an NEA-3B and assigned by the Navy to the Raytheon Company, where it flew as a test platform until making its last flight to NAS Pensacola, for delivery to the museum on June 30, 2011. This date was exactly fifty years and 64 days after its original acceptance by the Navy. It was the last flying example of the airplane known to generations of naval aviation personnel as the “Whale.”