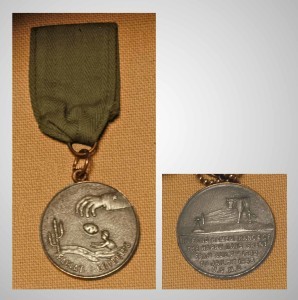 In the summer and fall of 1942, Pharmacist’s Mate First Class Farris Franklin Conner found himself on the island of Guadalcanal, rendering aid to wounded men of the 1st Marine Division.  For acts of courage and devotion, he received a Letter of Commendation from the Secretary of the Navy, among other awards.

One medal that does not appear on Farris Conner’s official military record, however, is the George Medal. Inspired by the phrase “Let George Do It” (a saying used when unpleasant assignments were allocated to the Marines), the medal was designed and paid for by the men of the 1st Marine Division after they returned to Australia. The medal informally commemorated their actions on Guadalcanal, where food, supplies, and ammunition were in short supply and fighting was fierce.

Legend has it that as few as 50 medals were cast before the original mold broke. Farris Conner is purported to have been in the room when the concept for the medal was conceived, and was assigned George Medal No. 12, certified and signed by his commanding officer. The ribbon affixed to each medal was taken from the herringbone twill material of the Marine utility uniform.

The George Medal wasn’t the only thing that Farris Conner brought back from Australia- his time in that country proved to be the happiest in his military service, due to his budding romance with Miss Joyce Cowley, a local girl from Melbourne. Engaged in March 1943, Farris and Joyce were granted permission to marry in August of that year. Joyce became one of approximately 8,000 women who left Australia after marrying American servicemen during World War II. The U.S. military, State Department, and Red Cross prepared war brides and their children for life in the United States, designating 20 ships for their transport. In all, 65,000 women worldwide became war brides to American servicemen.

The George Medal is on loan to the museum from Mrs. Farris Conner.