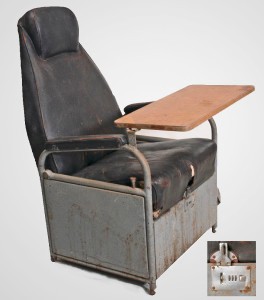 The ready room chair removed from the carrier Enterprise (CV 6) that was recently donated to the museum.
Download

When you think of artifacts at the museum, airplanes and flight jackets come to mind, but probably not chairs. Yet, within the past few months the arrival of a ready room chair has brought an elevated level of excitement to the members of the curatorial staff with its link to a storied ship.

Its path to the museum began with an individual with the unenviable task of scrapping one of the most famous ships in the history of the U.S. Navy. Born in Germany in 1899, Henry Hoffman was a man of the sea with World War I service in the German Navy and time in the Norwegian Merchant Marine during the early 1920s. Emigrating to the United States in 1923, he settled in New Jersey and raised a family while working as an engineer with the Lipsett Corporation. On July 1, 1958, after efforts to preserve the decommissioned aircraft carrier Enterprise (CV 6) by former crewmen and even Fleet Admiral William F. Halsey, Jr., came up short, the Navy sold the venerable flattop to Lipsett. Hoffman was placed in charge of her scrapping. 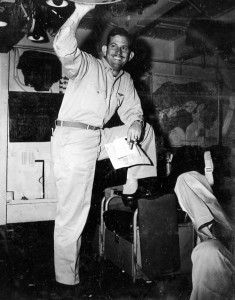 Commander William I. Martin, skipper of Torpedo Squadron (VT) 10, pictured with his foot propped up on a chair in the squadron ready room on board the carrier Enterprise (CV 6) in 1944.
Download

“Being a navy man, he had enormous respect for the Enterprise and was meticulous in recording her dismantling and saving artifacts from the ship, including lumber from the flight deck for her veterans,” recalled his son Carl, who as a nine year old boy stood on the flight deck of the “Big E” as she made her final voyage from the Brooklyn Navy Yard to Kearny, New Jersey, for scrapping.  Hoffman also saved some mementoes of the ship for himself, among which was a ready room chair. Held by the family for nearly half a century, it was recently donated to the museum along with other materials, including a ship’s clock, quarterdeck bell, and OOD log books from 1943-1945. Since it is unknown what squadrons occupied the ready room from which the chair was retrieved and whether it was aboard during the entire course of the war or not, we will never know who may have sat in it. Yet the fact that it could have been someone with the name Clarence Wade McClusky, Richard Best, Edward “Butch” O’Hare, James Flatley or the countless other legendary aviators that once called Enterprise home makes it all the more intriguing.