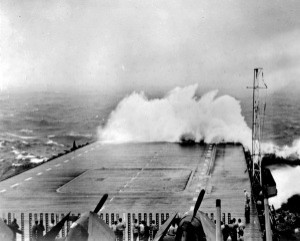 Water crashes over the flight deck of the carrier Hornet (CV 12) during a typhoon on June 5, 1945.
Download

As U.S. forces pushed increasingly closer to the Japanese Home Islands, U.S. Navy personnel became all too familiar with the deadly kamikazes that roared out of the clouds intent on deliberately crashing into U.S. ships. The term kamikaze meant divine wind, and recalled two timely storms that destroyed Mongol ships that attempted to invade Japan in the 13th century, the twentieth century version taking the form of suicide aircraft. However, for ships of the Third Fleet under the command of Admiral William F. Halsey, June 5, 1945, brought Mother Nature’s wrath of the likes probably experienced by the Mongols centuries earlier. As with a previous storm in December 1944, Halsey misjudged the course of this typhoon and correspondingly some of his fleet headed right into it.

Among the ships steaming through the threatening seas was the aircraft carrier Hornet (CV 12). Her skipper, Captain Austin K. Doyle, had retired to his cabin off the bridge on the evening of June 4th with his ship heading on a course away from trouble, leaving instructions in his night order book to awaken him if there was a change of course. At 0130, the Officer of the Deck reported to him that they were heading back into the storm. Discussions between Doyle and the embarked flag officer, Rear Admiral Joseph J. “Jocko” Clark and exchanges of message traffic with Task Force 38 commander Vice Admiral John S. McCain eventually resulted in permission to change course. However, it was too late.

Bringing Hornet into the wind, Doyle recalled that he “placed the seas about two points on the starboard bow and kept the position by alternately backing my engines.” The ship’ war diary reported the conditions as Hornet plowed through the angry waters of the Pacific. “Heavy continuous rain fell and mountainous pyramidal seas were encountered with waves 50-60 feet from crest to trough…The highest winds reached were observed at 0545 with a steady wind of 110 knots and gusts to 120 knots. Recalled one of Captain Doyle’s Marine orderlies, “Never have I see waves so high…our great big ship was no more than a peanut shell in that big storm.”

At some point during the storm, the forward section of the carrier’s flight deck collapsed back from the edge to Frame 4, a length of 24 ft. In addition, the heavy seas demolished a 40mm gun mount. Hornet was not alone, with the carrier Bennington (CV 20) also suffering a collapsed flight deck. However, no ship would suffer like the heavy cruiser Pittsburgh (CA 72), which lost 104 feet of her bow. Crewmen saved the ship by shoring up the forward bulkhead and the bow, nicknamed “McKeesport” after a suburb of Pittsburgh, was eventually recovered. 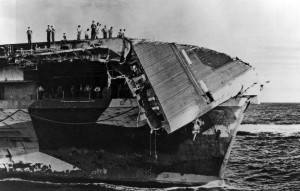 View of the collapsed forward section of the flight deck of the carrier Hornet (CV 12) in the aftermath of a typhoon on June 5, 1945.
Download

Not surprisingly, Hornet’s war diary for June 5th concluded with the statement, “There were no flight operations.” Yet, the following morning, Doyle ordered the carrier into the wind as Hornet prepared to launch aircraft to search for LSTs lost during the storm. The first plan off, an F4U Corsair, spun in on takeoff, and it was soon determined that shifting air currents caused by the collapsed forward section of the flight deck caused the mishap. Afterwards, with the ship backing down at a speed of 18 knots, Hornet launched 24 fighters to conduct searches for ships unaccounted for in the aftermath of the typhoon. After crewman cut holes in the overhanging parts of the flight deck to improve air flow, Hornet commenced launching over the bow on June 7th, as did Bennington, which had suffered similar damage.

Task Force 38.1 continued operating, including launching combat missions, until retiring to Leyte in the Philippines on June 10, 1945. All told, Task Group 38.1 lost twenty-five aircraft as a result of the storm and an equal number of ships suffered some damage ranging from the loss of whale boat to more significant structural damage. One man was washed overboard and ten others were injured to some degree. Task Group 30.8, which along with Task Group 38.1 bore the brunt of the storm, suffered damage to numerous ships, most notably its escort carriers, including Salamaua (CVE 96), whose forward flight deck was demolished. She also lost one crewman and had four seriously injured.

A Court of Inquiry convened to investigate the typhoon recommended that Admirals Halsey and McCain be assigned to other duties, and Secretary of the Navy James V. Forrestal sought to retire Halsey. However, on the basis of the potential impact on morale, the heroic Halsey was not retired from the service. McCain relinquished command of Task Force 38 two months later.

As for Hornet, the typhoon of June 5, 1945, ended her combat service. By the time repairs were completed and she returned to the Pacific, it was part of Operation Magic Carpet, returning American servicemen home.