It first appeared as a minor entry in the 1908 Annual Report of the Bureau of Construction and Repair, which noted that authorization for its construction was issued on November 2, 1907. Coal Barge No. 214, according to the report, measured 100×30 feet, and construction of it had not yet begun. The following year, the wooden vessel displacing 250-tons had been completed and it was assigned to the Navy Yard at Norfolk, Virginia, to support ships there. 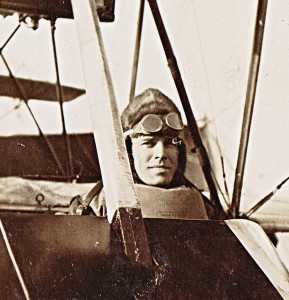 By 1915, the vessel’s service had taken it to Pensacola, where it was needed to support the coaling of ships that moored in Pensacola, particularly the station ship, the armored cruiser North Carolina (ACR 12), which was destined to be the platform for the first shipboard catapult launches in the U.S. Navy. Yet, before the equipment that was necessary for these operations was installed aboard the ship, testing was necessary and the aviators turned to the coal barge and a young lieutenant (junior grade) named Patrick N.L. Bellinger, a South Carolinian who had travelled around the world on a battleship during the cruise of the famous Great White Fleet. His flight one April morning was one to remember and not just for its contribution to the progress of naval aviation.

After the installation of the catapult on the deck of the barge, which offered the advantage of being able to be maneuvered so that the catapult was turned into the wind, providing greater lift for the launching aircraft, Bellinger waited out mechanical difficulties and unfavorable winds that, day after day, delayed the test until the morning of Friday, April 16, 1915. While eating breakfast, the young aviator received a telephone message informing him that the flight test was a go for that day. 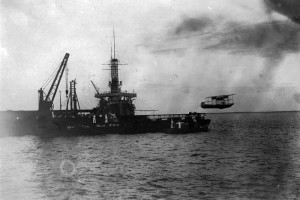 It is fair to say that Bellinger was not at his best. At the time, the naval aviators assigned to Pensacola were men about town, in demand to attend a myriad of social functions where citizens wanted to meet the young officers who cheated death in the clouds. The night before, Bellinger had been to a charity ball, one that in his unpublished memoirs he characterized as “not entirely dry.” Suffering the ill effects one might expect, he nevertheless pressed on, climbing into the cockpit of the AB-2 flying boat and taxiing it over to the barge, where it was hoisted onto the catapult. He recalled not making any unnecessary move for fear that he would get sick in front of the spectators gathered nearby. “With my motor running full speed,” he recalled, “I waited to be tripped; then there was a glorious feeling.” Bellinger’s aircraft accelerated down the track, the wind whipping across his face as the AB-2 zipped out over the water and ascended over Pensacola Bay.

This and future tests led to installation of the catapult on board North Carolina, with launches from the ship at anchor and while she was underway occurring in later months. The aviator making one of these flights was Lieutenant Commander Henry C. Mustin, who in later conversations told Bellinger that he thought the younger officer looked “very pale and seemed scared” during the test from the coal barge. When Bellinger shared his story, the senior officer likely produced an understanding chuckle. After all, Mustin’s nickname was “Rum.”