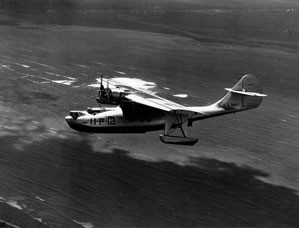 When introduced to fleet operations during the late-1930s, the PBY Catalina represented for prewar naval tacticians and strategists a highly capable long-range scout for the engagements foreseen to take place across great distances in the Pacific Ocean. However, the entry of the United States into World War II cast the airplane in roles not originally envisioned for it, including hunting submarines with innovative wartime weaponry, staging night bombing attacks against Japanese shipping and positions, and performing air-sea rescues, sometimes under enemy fire. The adaptability of the airplane to this array of missions made it one of the most versatile platforms of World War II.

Consolidated Aircraft Corporation was already a mainstay in the design of flying boats for the Navy when it began work on the airplane that would become the PBY. One of the inhibiting factors in the performance of the airplane’s predecessor flying boats was in their design, which incorporated a maze of struts and wires supporting their wings. In designing the PBY, Consolidated engineers drew up a flying boat built around a high-mounted parasol wing with minimal struts necessary because of internal bracing. This reduced drag along with a design feature in which the wing floats retracted once airborne to form the airplane’s wingtips. As a result, the PBY boasted a top speed 40 M.P.H. greater than the P2Y aircraft it succeeded.

Deliveries of the PBY began in 1936, and two years later the type equipped 14 Navy patrol squadrons. The aircraft almost immediately demonstrated its capabilities, completing record long-distance flights. In 1939, Consolidated introduced an amphibian version of the aircraft with wheels that retracted into the float, the PBY-5A joining the seaplane versions of the Catalina already in service. 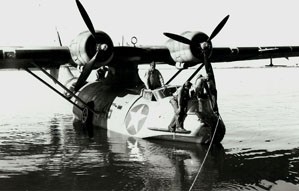 PBYs performed their first combat missions before the United States formally entered World War II. In May 1941, a Lend-Lease PBY flown by Ensign Leonard Smith, a U.S. Navy aviator serving as an observer with the British Royal Air Force, located the German pocket-battleship Bismarck, enabling the Royal Navy to close in and sink her. When the Japanese attacked Pearl Harbor on December 7, 1941, a PBY made the only aerial attack against the Japanese, bombing a midget submarine. Six months later, during the pivotal Battle of Midway in June 1942, PBYs spotted the Japanese invasion and carrier strike forces in advance of the carrier vs. carrier engagement that helped changed the course of the war.

As the United States and its allied turned to the offensive, PBYs began equipping “Black Cat” squadrons, which took advantage of the aircraft’s range and loitering capability to carry out effective night attacks against the Japanese, the airplane’s painted black to mask them in the nocturnal environment. In the Atlantic, PBYs proved adept at hunting German U-boats, with two squadrons equipped with magnetic anomaly detection gear in order to locate submerged submarines by tracking how they disrupted the Earth’s magnetic field while submerged. Retro-bombs were also installed which, when fired backwards at a velocity equal to the speed of the aircraft, dropped straight down upon the enemy submarine. 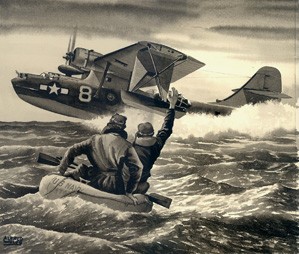 Flying search and rescue missions codenamed “Dumbo,” PBYs were a welcome sight to downed airmen floating in life rafts after being shot down and to survivors of ship sinkings. It was a PBY that was first on the scene to rescue survivors of the ill-fated heavy cruiser Indianapolis (CA 35) and in February 1944, Lieutenant (junior grade) Nathan Gordon rescued 15 downed Army Air Forces fliers from the waters of Kavieng Harbor while his PBY was under fire, a feat for which he received the Medal of Honor.

In addition to the Army Air Forces, which flew PBYs in the air-sea rescue role, the U.S. Coast Guard operated the type in World War II and beyond, not retiring them until 1954. The last Catalina in U.S. Navy service was retired from the Naval Air Reserve at Atlanta, Georgia, in 1957.