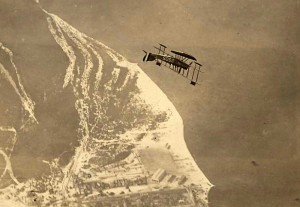 An N-9 seaplane picture in a loop over Naval Air Station (NAS) Pensacola, Florida, during 1918-1919.
Download

In the days before America’s entry into World War I, when the number of personnel assigned to Naval Aeronautic Station Pensacola was relatively small, everyone knew when a special flight was scheduled to occur. Since the aviation personnel first arrived in January 1914, attempts to reach record-breaking altitudes and test flights in newly delivered airplanes were more common than one would think and drew the attention of those on the ground. Such was the case on February 13, 1917, when Marine Captain Francis T. Evans took off in an N-9 to attempt to loop.  As a publication of the time recounted, the flying leatherneck “astonished the officers at the aeronautical station…who had considered the feat impossible.” The reason behind their disbelief was the fact that Evans flew a seaplane with an elongated pontoon beneath the fuselage for water take offs and landings. Thus, conventional wisdom held that though a loop was no longer a novelty in wheeled aircraft, the weight of the pontoon on a seaplane would prevent it from achieving enough speed to complete a loop. To this end, as the same publication reported, “Captain Evans found it necessary to drive through the air at great speed before he could gain the inverse position. He then looped-the-loop twice before his descent.”

Loops became part of the training curriculum at Pensacola after Evans’ successful demonstration and they were memorable for all who performed them in the N-9. “I did not get over the top, but hung upside down for a while as I did not have enough speed,” wrote one student. “It was something to look up and see the station above me…when the plane is upside down the engine stops with a putt putt bang bang. Then when going into the dive the motor comes on with a brrrr.”

The accompanying photograph shows a Burgess-built N-9 pictured in the midst of a loop over NAS Pensacola. Delivered to the station in July 1918, this airplane (Bureau Number A-2505) served for less than a year, an errant landing—not a loop— in June 1919, rendering it a total wreck.