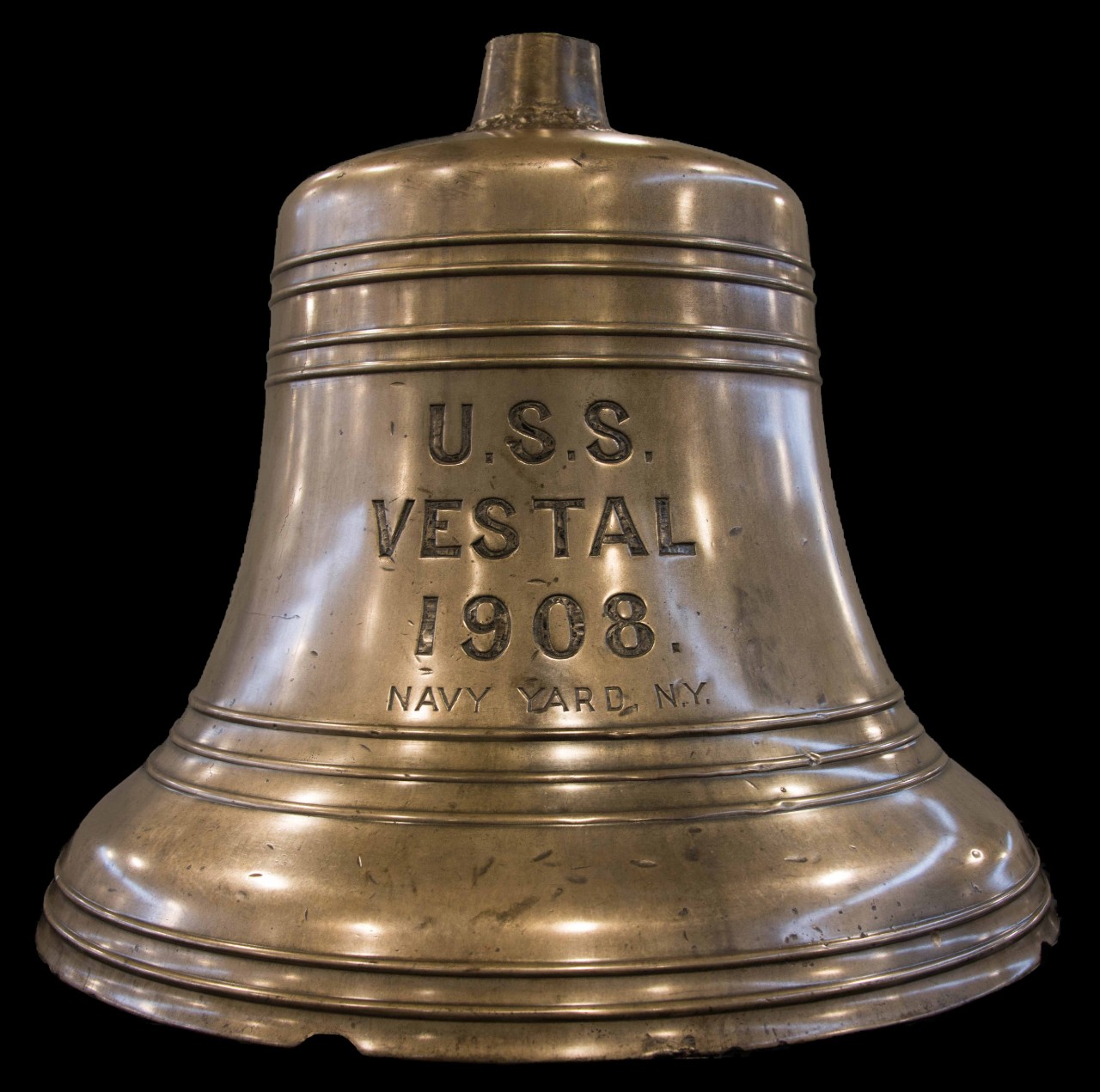 One brass ship bell from the repair ship USS Vestal. Bell is engraved in between concentric circles "U.S.S. Vestal/1908/Navy Yard N.Y." Interior is painted red with flaking of paint throughout.

USS Vestal began its military career as a fleet collier in 1909, transporting and delivering coal along the Atlantic coast and in the West Indies. The ship was converted to a fleet repair ship and recommissioned in September 1913. During World War I, Vestal provided repair and overhaul services to US naval forces operating in European waters. Vestal was transferred to the Pacific Fleet in 1927 and was with the fleet when it was stationed permanently at Pearl Harbor in 1940.

On December 6, 1941, USS Vestal was moored alongside USS Arizona (BB-39) to supply services to the battleship during routine maintenance scheduled between December 6-12.  On December 7, 1941 at 7:55 a.m., Vestal went to general quarters as Imperial Japanese Navy aircraft began their attack on the fleet at anchor. Vestal was struck by two bombs during the first attack wave, while the ship responded with anti-aircraft fire.

Arizona took numerous direct hits, including a bomb that pierced the deck of the ship and ignited the ship’s magazine. The force of the blast cleared Vestal’s deck of personnel, including the ship’s commanding officer, Commander Cassin Young. Commander Young swam back to the ship, countermanded an abandon ship order, and directed the ship underway.

At 8:45 a.m., Vestal’s mooring lines holding the ship next to Arizona were cut and with help from the tug Hoga (YT-146), the ship slowly removed itself from hazard. Still heavily damaged, Vestal began showing signs of sinking and listing to the starboard. To save the ship and keep the channel clear of a potential wreck, Commander Young grounded the vessel on Aiea Shoal, away from the main harbor channel.

For his actions, Commander Young was awarded the Medal of Honor. Following the attack, Vestal’s crew worked to repair their ship while also taking part in salvage and rescue operations. Repair parties from Vestal were sent to USS Oklahoma (BB-37) so that welders could cut into the ship to rescue sailors trapped within Oklahoma.