Excellence in Anti-Aircraft Gunnery Award, Sponsored by the Daughters of the American Revolution (DAR) 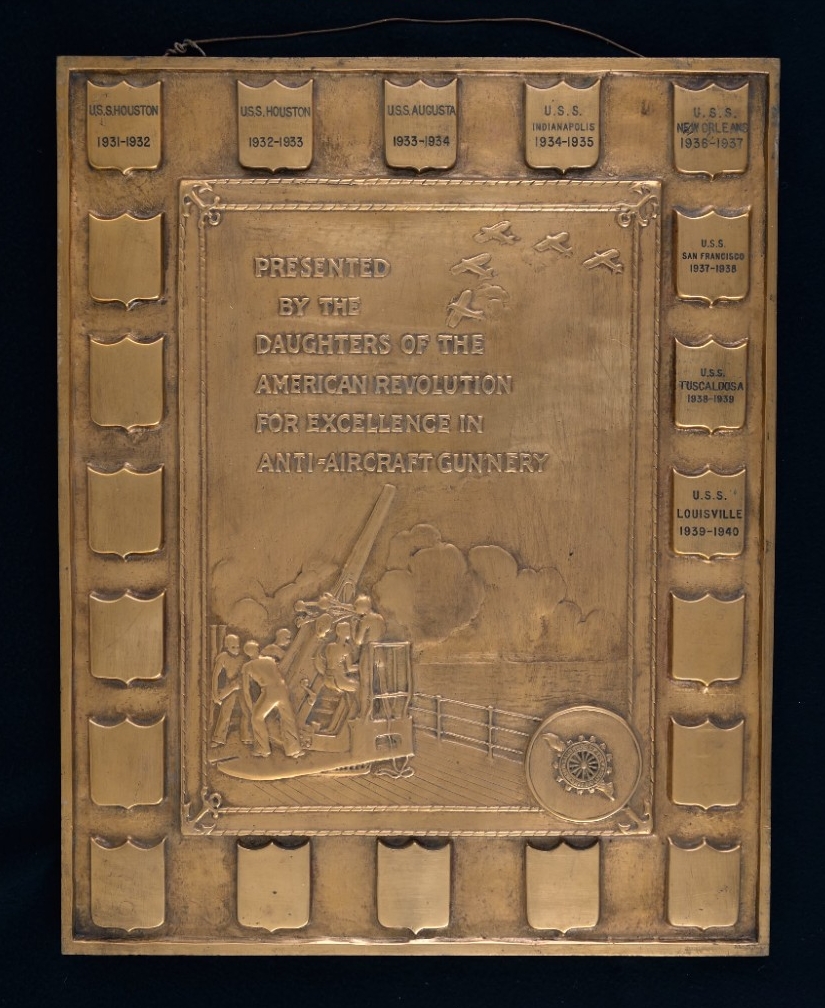 One award plaque for excellence in anti-aircraft gunnery. Bronze rectangular plaque with twenty small shield plaques bordering the central image. The five shield plaques across the top and three plaques down the right side are engraved with ship names and award years. The central image has a double rope border. There is an anchor at three of the corners of the border. The Daughters of American Revolution (DAR) symbol is in the bottom right corner. The DAR image consists of a wheel with thirteen stars around the outer rim. The inner rim is inscribed "Daughters of the American Revolution." Behind the wheel, on a diagonal, is a furled flag. The top right corner of the central image has a bas relief of five planes flying in a V-formation. The last plane on the left leg appears to be hit and breaking formation. The lower portion of the central image has a deck gun pointed towards the planes. There are five men operating the gun. The top left portion of the image has raised lettering "PRESENTED / BY THE / DAUGHTERS OF THE / AMERICAN REVOLUTION / FOR EXCELLENCE IN / ANTI-AIRCRAFT GUNNERY." PC #9 is written on the reverse of the plaque.

From left to right and down the right side, the shield plaques are engraved:

The Daughters of the American Revolution (DAR) has a long history of sponsoring and supporting the US military. The society sponsored this plaque as an award for excellence in anti-aircraft gunnery. USS Louisville was the last ship to receive the award in 1939-1940. It appears with the outbreak of World War II, the award ceased being awarded. The plaque came to NHHC in 1948 from USS Louisville after she entered the Atlantic Reserve Fleet.