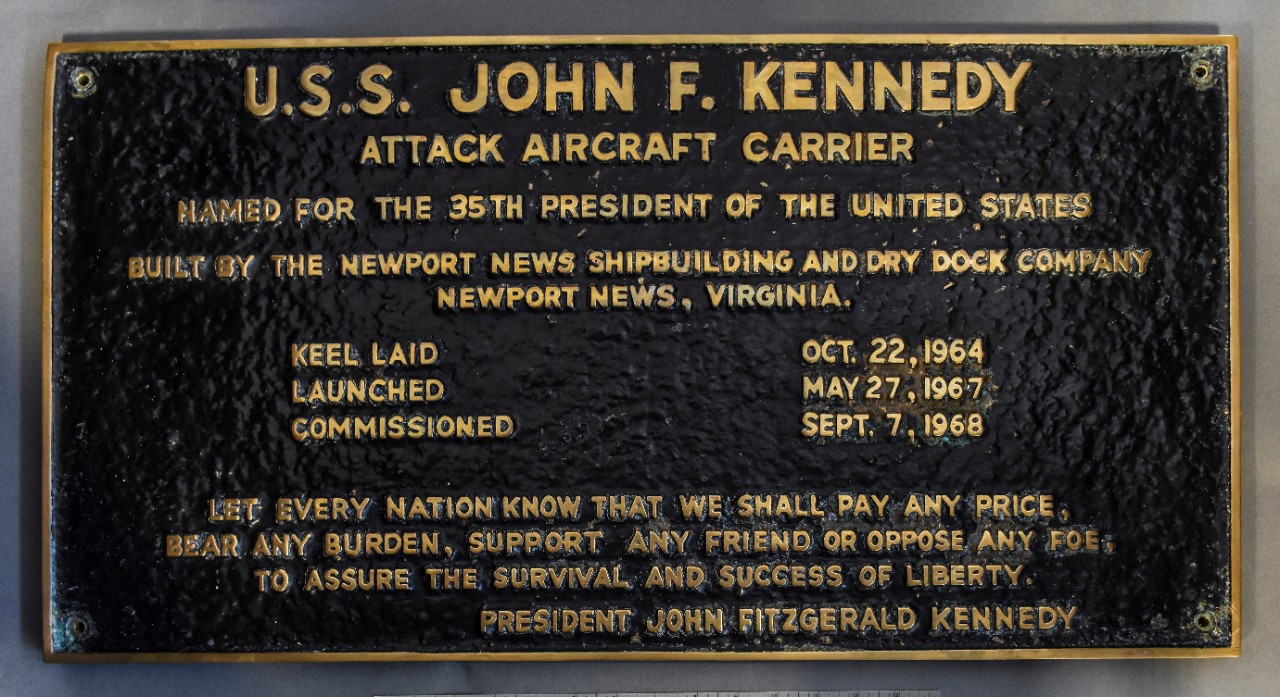 One brass ship builder’s plaque from the aircraft carrier USS John F. Kennedy (CV/CVA-67). The plaque is rectangular in shape. The surface is painted black with raised polished brass letters reading “U.S.S. JOHN F. KENNEDY / ATTACK AIRCRAFT CARRIER / NAMED FOR THE 35TH PRESIDENT OF THE UNITED STATES / BUILT BY THE NEWPORT NEWS SHIPBUILDING AND DRY DOCK COMPANY / NEWPORT NEWS, VIRGINIA. / KEEL LAID OCT. 22, 1964 / LAUNCHED MAY 27, 1967 / COMMISSIONED SEPT. 7, 1968 / LET EVERY NATION KNOW THAT WE SHALL PAY ANY PRICE, / BEAR ANY BURDEN, SUPPORT ANY FRIEND OR OPPOSE ANY FOE, / TO ASSURE THE SURVIVAL AND SUCCESS OF LIBERTY / PRESIDENT JOHN FITZGERALD KENNEDY."

The USS John F. Kennedy (CV/CVA-67), named in honor of the 35th President of the United States and the first ship to bear the name, was christened on 27 May 1967, just two days shy of what would have been the former president’s fiftieth birthday. Nine-year-old Caroline Kennedy, the daughter of the late President, was the ship’s sponsor. Also in attendance were the former first lady and widow of President Kennedy, Jacqueline Kennedy, John F. Kennedy, Jr., and President Lyndon Johnson.

The ship was originally designed to be the fourth ship of the Kitty Hawk class of aircraft carriers. However numerous design changes led to her being classified in a class of her own. She was the last conventionally powered carrier built for the Navy. Serving from 1968 until 2007, the carrier was deployed 18 times, including supporting operations during the first Gulf War and Operation Enduring Freedom in Afghanistan.

The quote at the bottom of the plaque is from Kennedy’s speech during his presidential inauguration on 20 January 1961. The most memorable line from this speech was “Ask not what your country can do for you-- ask what you can do for your country.”