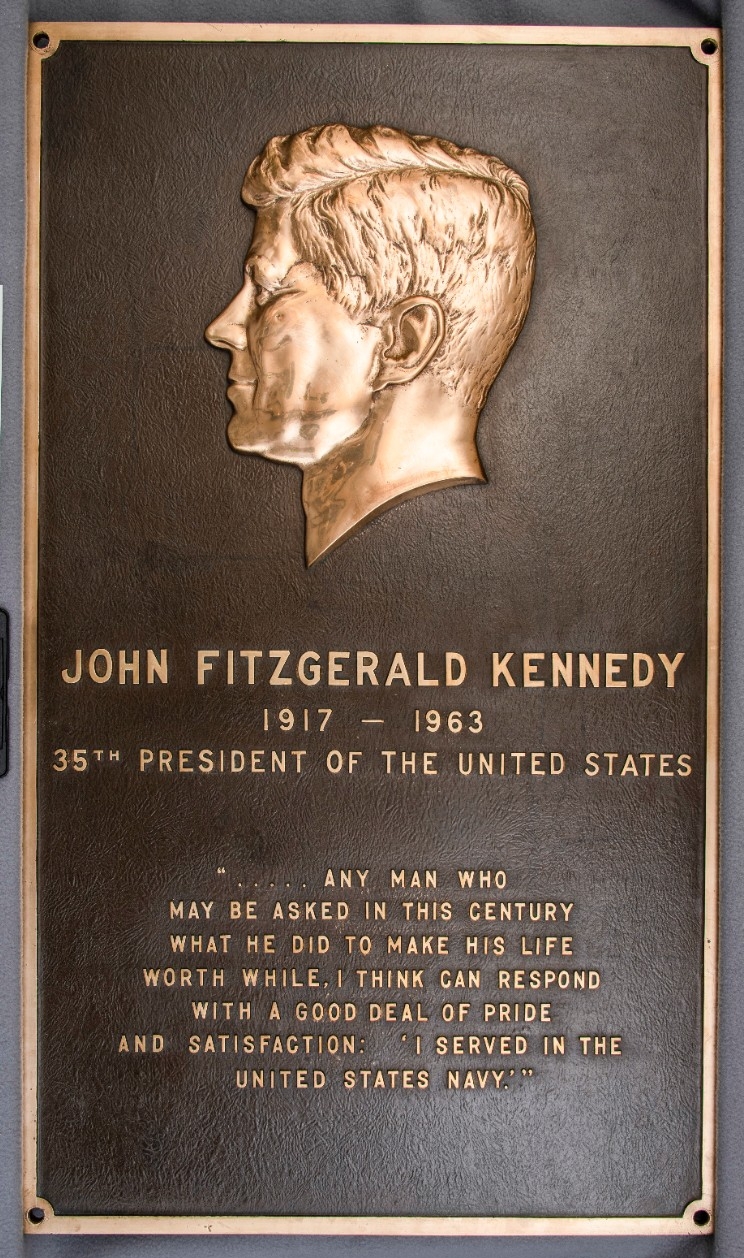 One brass memorial plaque from the aircraft carrier USS John F. Kennedy (CV/CVA-67). The plaque is rectangular in shape. At the top is a raised profile bust of John F. Kennedy, 35th President of the United States and the ship’s namesake. The surface of the plaque is painted brown with raised polished brass letters reading “JOHN FITZGERALD KENNEDY / 1917 - 1963 / 35TH PRESIDENT OF THE UNITED STATES / '.....ANY MAN WHO / MAY BE ASKED IN THIS CENTURY / WHAT HE DID TO MAKE HIS LIFE / WORTH WHILE, I THINK CAN RESPOND / WITH A GOOD DEAL OF PRIDE / AND SATISFACTION: ‘I SERVED IN THE / UNITED STATES NAVY.’"

John F. Kennedy had a long relationship with the US Navy. He was commissioned as an ensign with the Navy Reserves in October 1941. While in command of PT-109, a patrol torpedo boat operating in Blackett Strait in the Solomon Islands, the boat was rammed and sunk by the Japanese destroyer Amagiri. Kennedy and most of his crew were able to escape the damaged vessel and evade the notice of the Japanese. Under Kennedy’s leadership, the crew were successfully rescued six days later. For his heroic efforts, Kennedy was awarded the Navy and Marine Corps Medal.

After a full postwar political career that included being elected to the US House of Representatives and the US Senate, Kennedy was elected president in 1960. As President, Kennedy was the Commander-in-Chief for a Cold War Navy of over 800 ships. Most notably Kennedy used the Navy to enforce the naval blockade of Cuba during the Cuban Missile Crisis. He stayed in touch with the Navy throughout his presidency including visits to the Atlantic Fleet in 1962, and the US Naval Academy in 1963. This quote is from a speech he gave to cadets at that time.