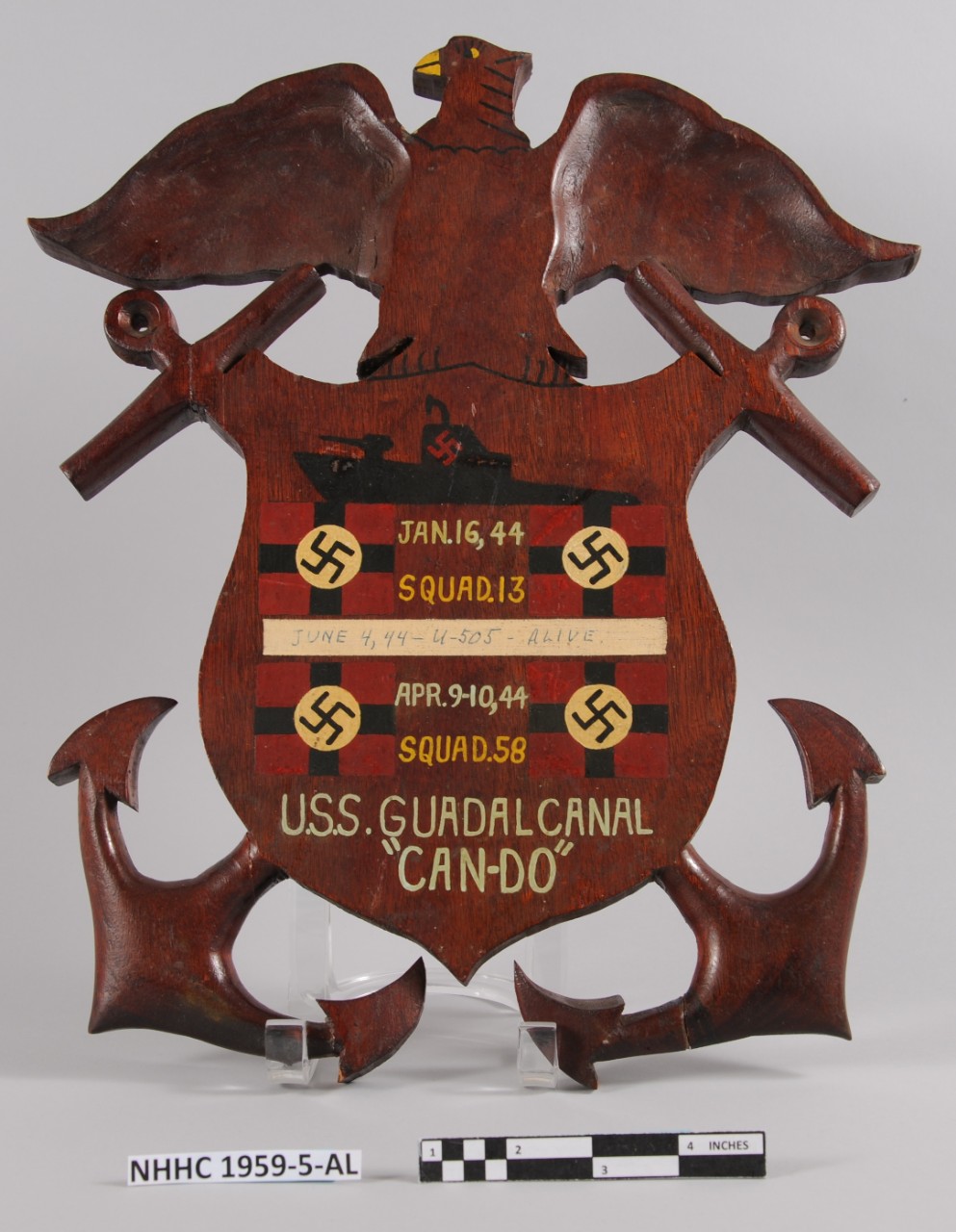 One submarine victory commemorative plaque from the USS Guadalcanal (CVU-60/ CVE-60). Dark brown wood plaque consists of a shield in the center and an eagle with spread wings perched on top. Behind the shield are two crossed anchors. The eagle has a painted beak and eyes. The top of the shield is painted with the silhouette of a German submarine. There are four Nazi Naval flags painted in the center. They have a red background and a black cross. In the center is a white circle with a black swastika. Between the top two flags, painted letters read, "JAN. 16, 44/SQUAD. 13". Between the two bottom flags, painted letters read, "APR. 9-10, 44/SQUAD. 58". Between the two rows of flags is a strip of white tape with handwritten letters in blue ink reading, "JUNE 4, 44- U-505- ALIVE". Below the flags, painted letters read, "U.S.S. GUADALCANAL/"CAN-DO"".

The Nazi Naval flags represent the three German U-boats sunk by VC-13 and VC-58 operating from USS Guadalcanal. On 16 January 1944, two Avengers from VC-13 spotted two German submarines during a refueling operation. Attacking with rockets and depth charges, they were able to sink U-544. The other sub managed to avoid damage and escape the area. On 9 April, the destroyers USS Pope, USS Pillsbury, USS Chatelain, and USS Flaherty of Task Group 22.3 located U-515 north of the Azores. Bad air and low batteries forced the sub to surface where she was raked by the destroyers and aircraft. The following day, U-68 was spotted and sunk by VC-58.

The plaque was most likely made after USS Guadalcanal returned to Norfolk for repairs in April 1944. After the plaque was made, the Guadalcanal scored another victory requiring an addition to the plaque. Returning to the Atlantic Theater in May 1944, Guadalcanal’s Task Group 22.3 discovered a German submarine, U-505, recharging her batteries on the surface. Though the sub attempted to flee, the Task Group eventually cornered her. The Germans attempted to scuttle the sub before they abandoned ship, but they were unsuccessful. A boarding party from USS Pillsbury boarded the abandoned sub resulting in the capture of valuable equipment, codes, and the sub itself. U-505 was towed to the United States for study.