On 24 March 1870, USS Saginaw arrived at Midway Atoll to support dredging operations to widen the channel into the lagoon for a proposed US Navy coaling station. By October of that year, the efforts were decided to be in vain and on 28 October, the ship left Midway Atoll for the journey back to San Francisco. As the ship left Midway, the commanding officer LCDR Montgomery Sicard, gave orders to set course first for Ocean Island, only 50 miles from Midway. The stop at Ocean Island was to check for any shipwrecked sailors that might have washed up on the island. 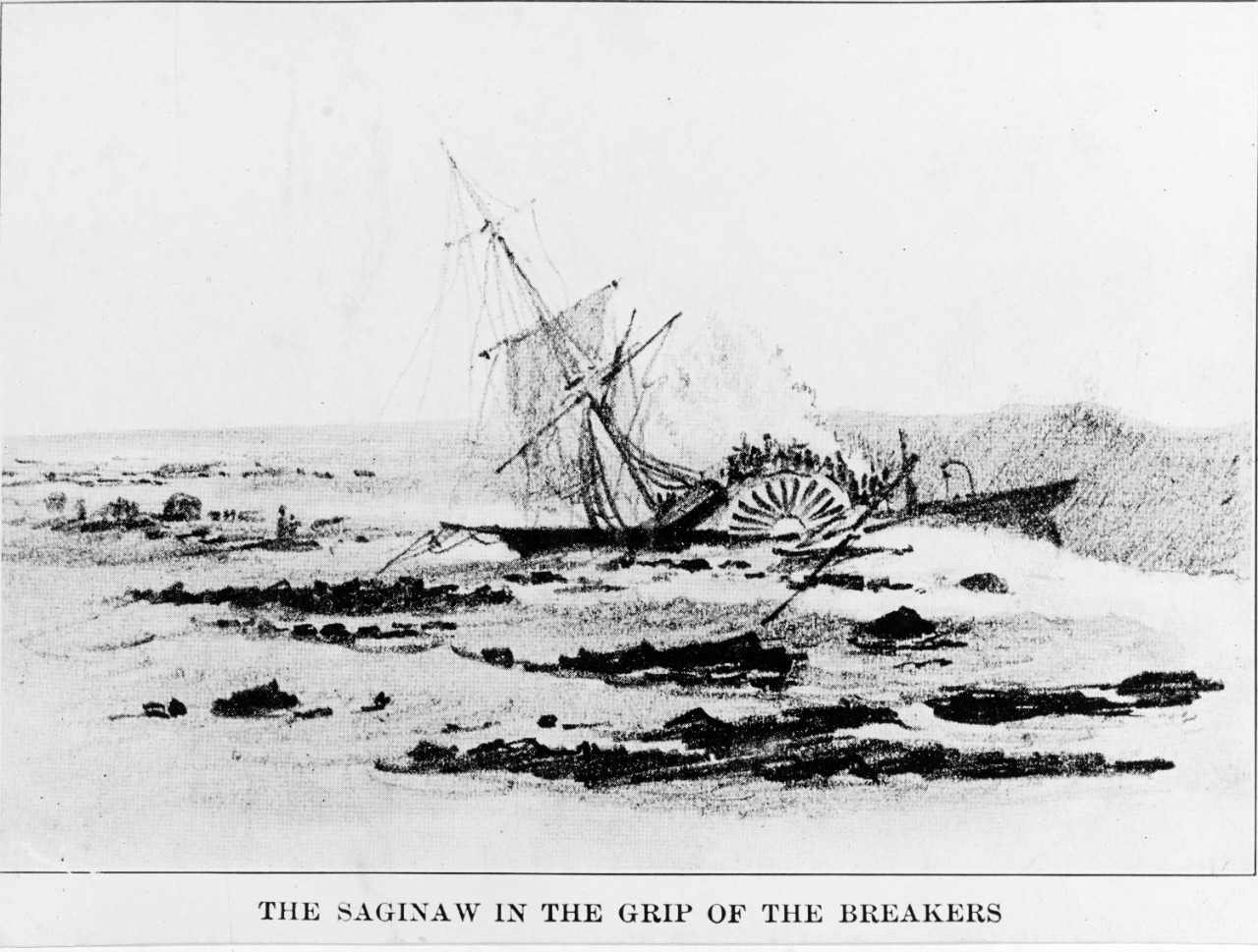 In the early morning hours of 29 October, Saginaw struck an outlying reef of Ocean Island. Ocean waves pushed the ship farther onto the reef until it was impossible for the ship to escape. With the realization that the ship was lost, Sicard ordered his crew to remove as much supplies and equipment as possible to Ocean Island itself. After working throughout the day to salvage as much as possible from the stricken ship, LCDR Sicard gave the order to abandon the ship at 5pm on the evening of 29 October.

After three days of setting up camp and tending to the wounds of his battered crew, Sicard announced that they would attempt to sail to Honolulu for help. This decision was made after assessing the available supplies, health of the crew, and their location as the lack of ocean traffic made rescue by a passing ship a long shot.

The captain’s gig was selected from the surviving ship’s boats, and the crew brought the craft onto shore to begin modifying it for the 1,500 mile trip to Honolulu. The crew first added 8 inches of freeboard to the 25-foot long and 6-foot wide vessel by adding side planking. This freeboard added height between the water and the top of the boat. They also created a top deck, which they then covered in canvas. Metal strips were used to reinforce the bow and steps for two masts were constructed, along with the masts and necessary sails/rigging. All the materials used in the construction were salvaged from the wreck of USS Saginaw itself. 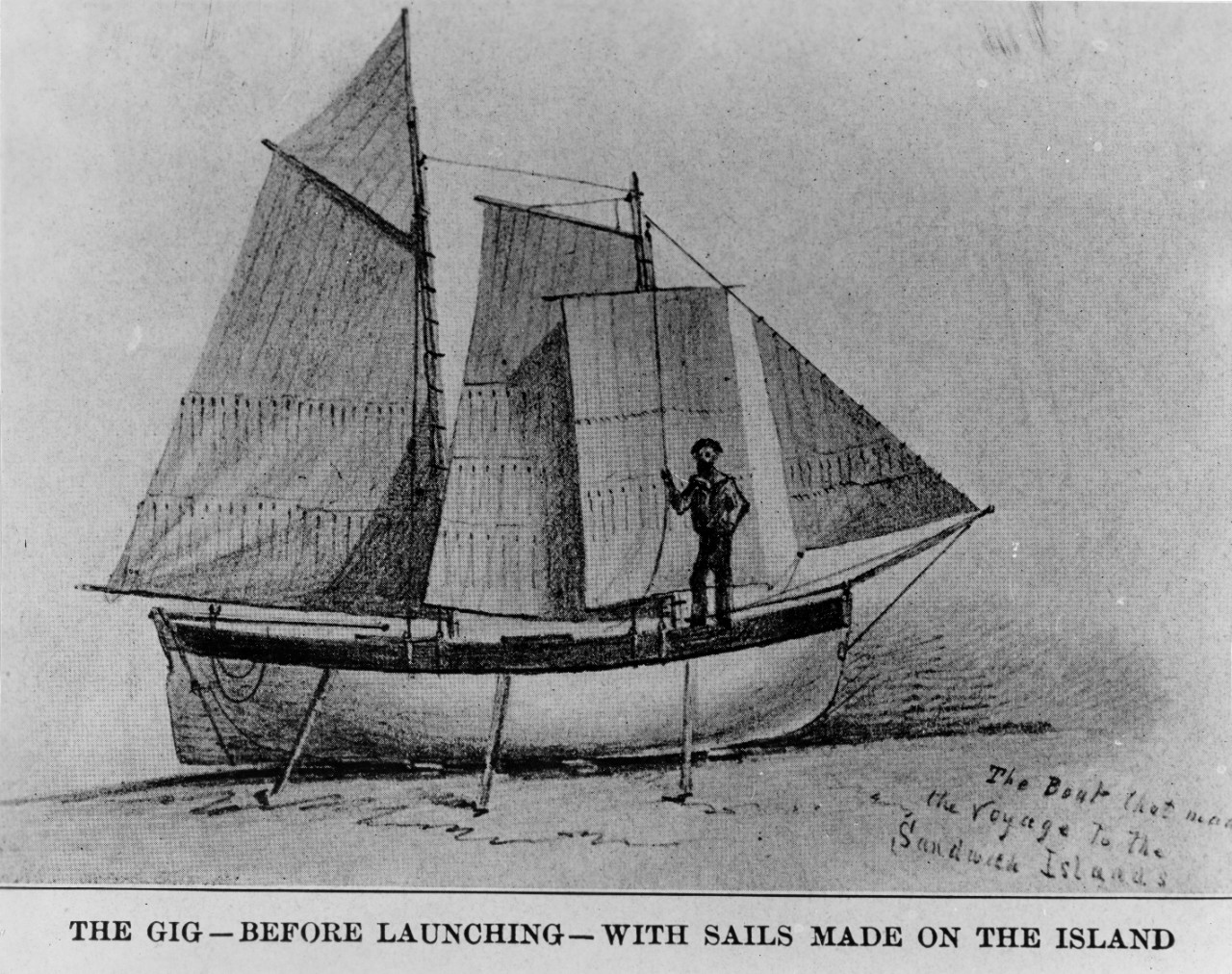 These modifications were all necessary to make the captain’s gig, which was normally used in harbor or calm waters for ship to shore transport, better suited for long distance travel over rough ocean waters. It gave the crew protection from the elements, additional means of propulsion, and more stability and safety in the craft.

The ship’s executive officer, LT John Talbot was selected to lead the all-volunteer expedition. His crew consisted of Quartermaster Peter Francis, Coxswain William Halford, and dredging operation contractors James Muir and John Andrewes, who both temporarily enlisted in the Navy for their journey.

The boat’s crew were given equipment and supplies for the estimated 35-day trip to Honolulu and provided a navigational sextant constructed by Engineer Hershcell Main. On the afternoon of 18 November, the crew of USS Saginaw launched the gig from shore and sent LT Talbot and his men on their way, praying that their journey would end in salvation for the rest of the crew. 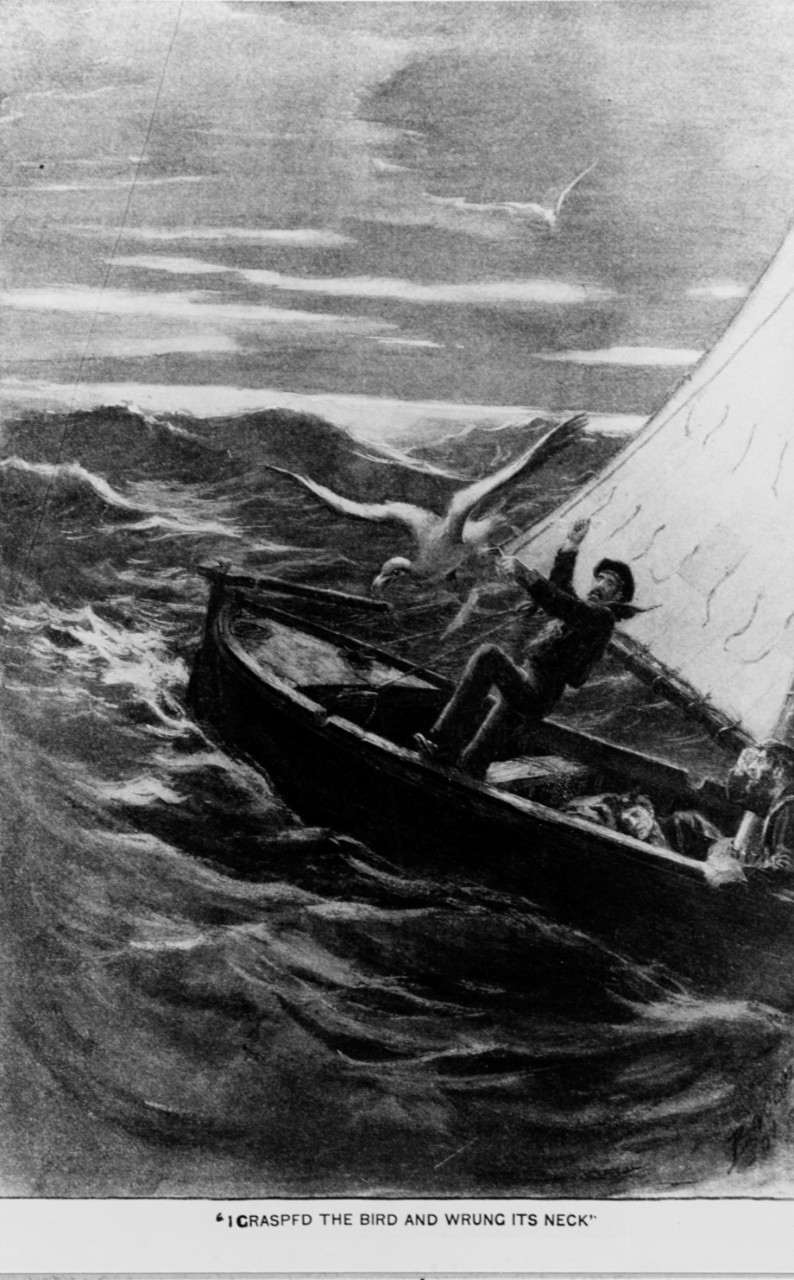 Due to prevailing winds and ocean currents, Talbot could not sail directly to Hawaii. He was forced to plot a circuitous route that added hundreds of miles to the journey. They also faced numerous hardships along the way. They boat, not designed to travel long sea distances, constantly leaked and required the men to regularly bail water out of the boat. Much of their food supplies were ruined by seawater and other factors, causing the men to become weak and ill from lack of food. During this part of their journey, the entire gig’s crew carved their names into the hatch combing around the main hatch. Their names are still visible today and stand as a testament to their trials and the lengths they went to save their shipmates still stranded on Ocean Island.

After 28 days at sea, the boat’s crew sighted Kaula Rock, a small rock formation southwest of the Hawaiian island of Kauai. The crew decided to make for Kauai to get assistance as they did not think they would be able to make it the extra 150 miles to Honolulu in their physical condition and the condition of the boat. On the evening of 18 December, they reached Hanalei Bay on the north side of Kauai but decided to attempt to make landfall the next morning in full light.

With Talbot on watch and the rest of the crew below, the boat strayed too far into rough waters as breakers began tossing the boat around until it capsized. Talbot, Francis, and Andrews all drowned during the ordeal, while both Halford and Muir sustained injuries. As the boat and the surviving crew washed up on the western side of the island, Halford dragged Muir to shore and began moving equipment and supplies from the gig further onto shore.

Halford discovered there was a piece of the shattered mast embedded in his leg. He removed the shard of wood himself but passed out from the pain. He was found several hours later by local Peter Nowlien. After regaining consciousness, Halford immediately began searching for Muir, who was found further up the beach, dead from his injuries sustained during the capsizing of the boat.

After being taken in by the locals, Halford found a ship’s captain who was willing to take him to Oahu, landing him there on Christmas Eve. Halford immediately went to the US Consul’s office and briefed them on the situation. Minister Henry Peirce chartered a ship, the Kona Packet, to sail for Ocean Island to rescue the crew of USS Saginaw. While the Kona Packet was underway, King Kamehameha V of the Hawaiian Kingdom dispatched the screw steamer SS Kilauea to assist with the rescue of the ship’s crew.

On 3 January, the crew on Ocean Island sighted SS Kilauea, with the Kona Packet arriving shortly after. With the exception of the four sailors from the gig’s crew who died during their journey to being relief, the entire ship’s company was still alive and well. Two days later, the crew was loaded onto the SS Kilauea and began the steam back to Honolulu, arriving on 14 January 1871. 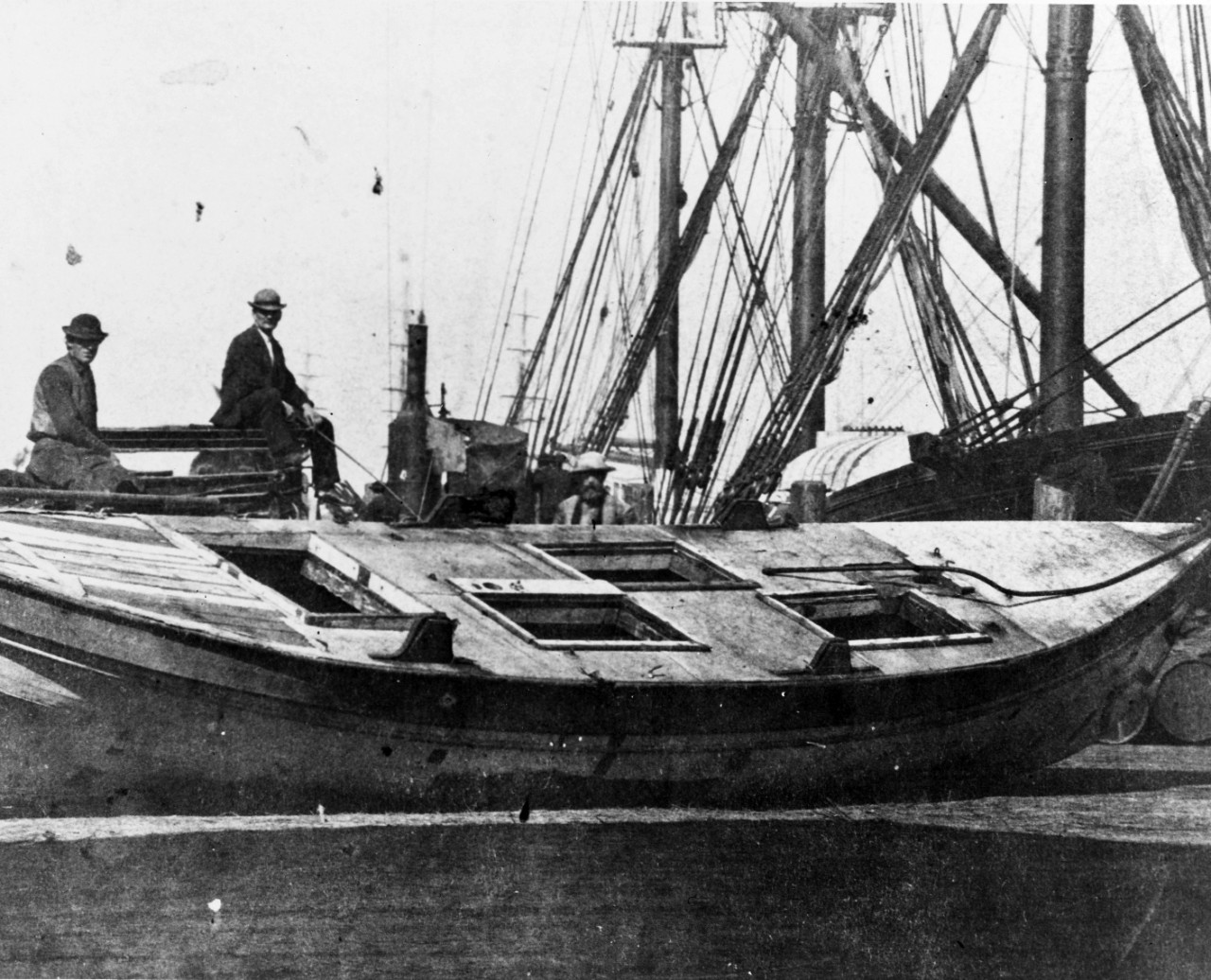 After the tremendous journey of John Talbot and his crew that resulted in the death of all but William Halford and the rescue of the remaining crew on Ocean Island, the journey of the gig itself was far from over. The gig was transported from Kauai to Honolulu with the crew and on 25 January, was auctioned off to raise money for the Saginaw’s crew and purchased by a group of locals who immediately donated it back to the Navy.

The boat was then conveyed back to California and was kept at Mare Island Shipyard until 1886 when it was taken to the east coast to serve as a training boat aboard USS Jamestown. In 1889, the gig was taken to the US Naval Academy in Annapolis, MD. Efforts in the 1930s to move the gig to a prominent display location on campus were derailed and the gig was exhibited in the building housing the swimming pool.

In 1947, citing the need for the space the gig took up, the Superintendent of the Naval Academy transferred the gig to the Curator of the Navy, which eventually became known as the Naval History and Heritage Command (NHHC). The gig was loaned to the city of Saginaw, MI in 1954 and was displayed at several locations in the area including the Saginaw Art Museum, the Saginaw Water Treatment Plant, and the Saginaw County Historical Museum. In 2015, the Saginaw City Historical Museum ended their loan and returned the gig to NHHC after 61 years on loan. 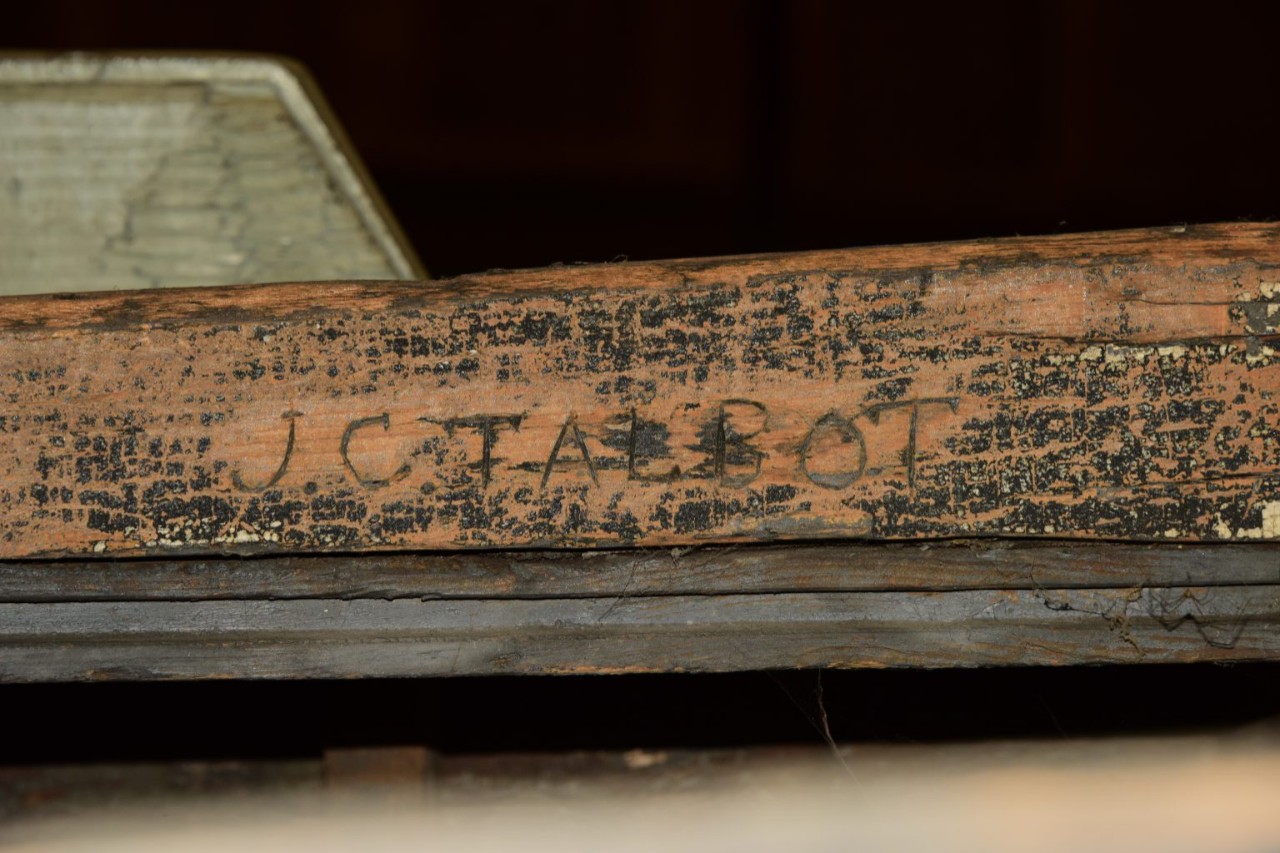 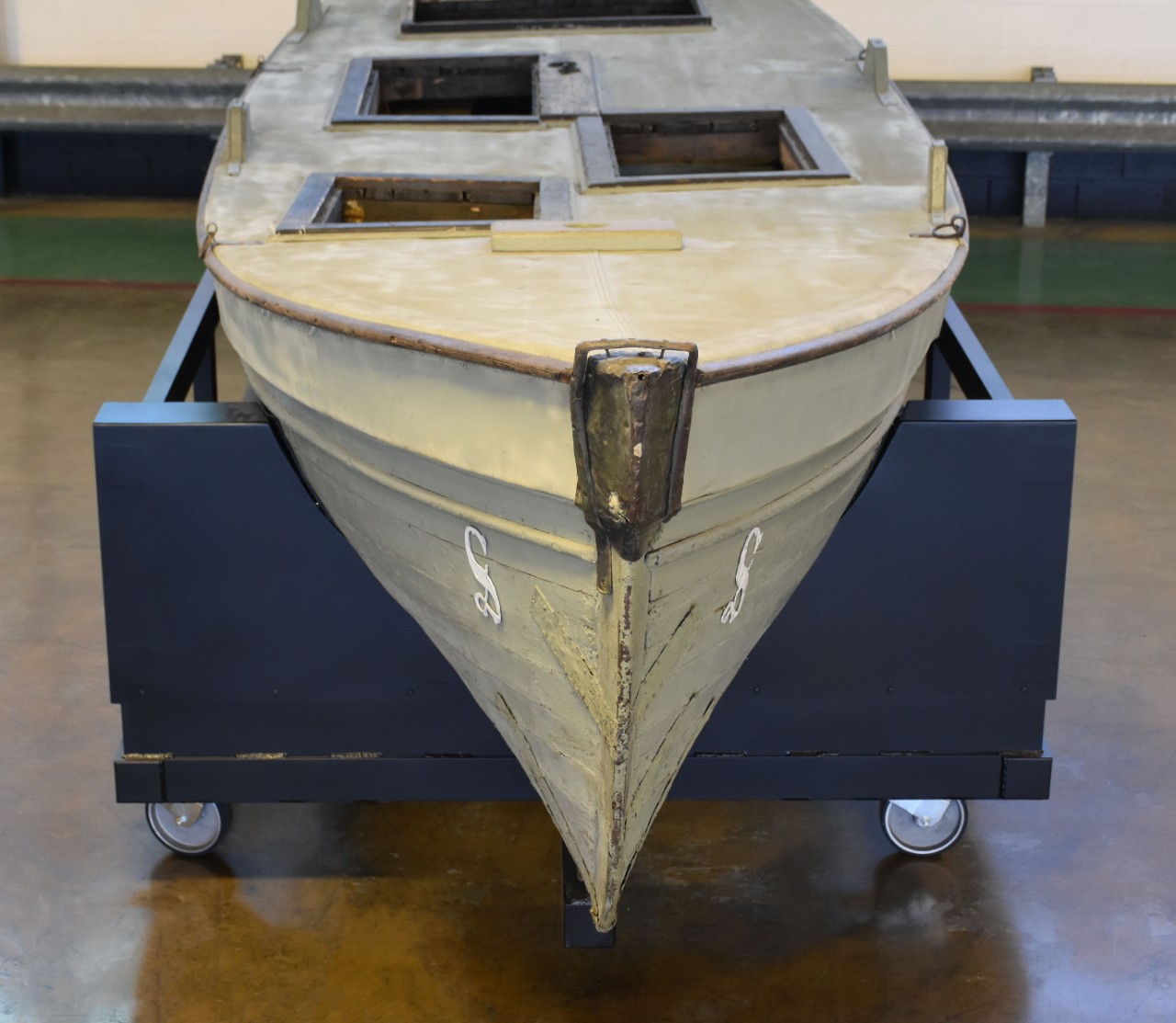