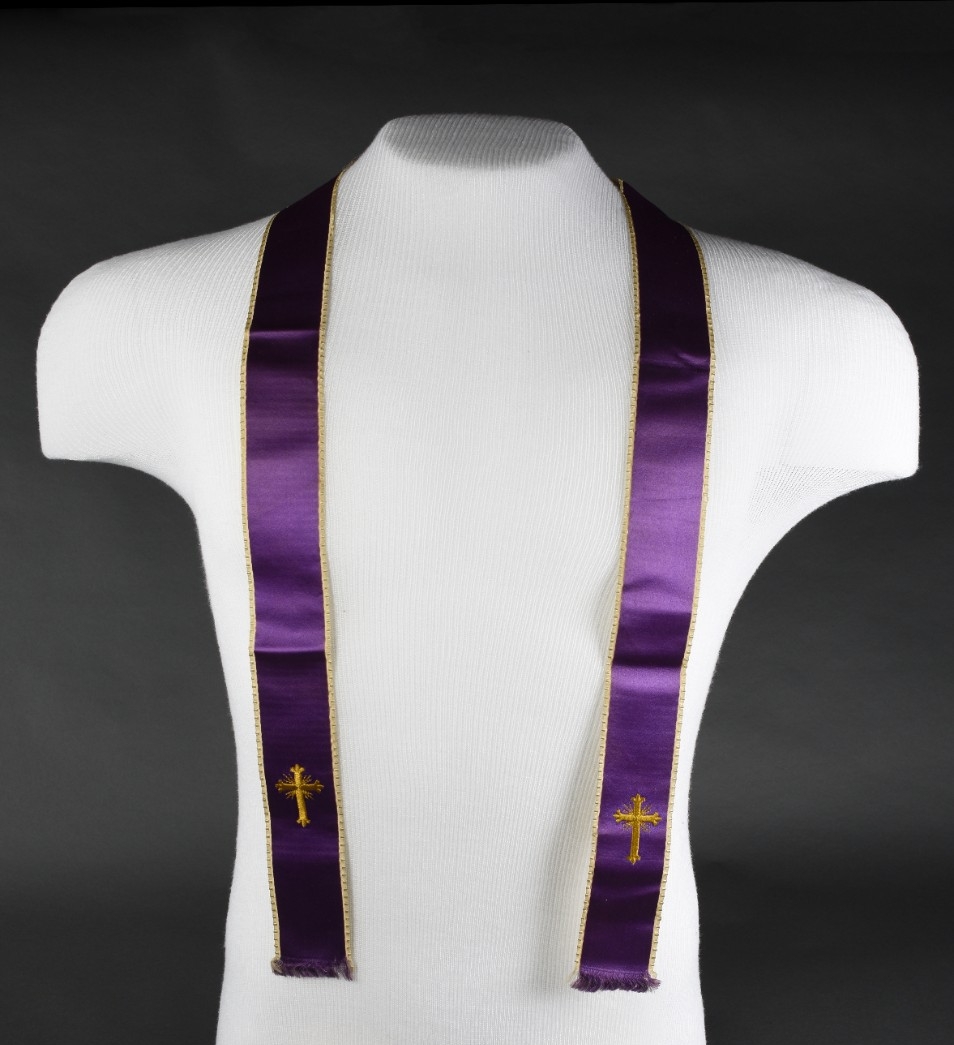 One purple silk Catholic Chaplain's stole with gold embroidery along the edges and an embroidered gold cross at each end. Edges of the stole are frayed.

LT John Francis Crotty was born in New York City on 26 August 1909. After graduating from high school, Crotty entered Cathedral College in Manhattan and attended St. Joseph’s Seminary (Dunwoodie) New York where he received his BA in 1935. Crotty was ordained on 8 June 1935 by Cardinal Patrick Joseph Hayes. Cardinal Hayes spent a portion of his career during World War I recruiting Chaplains for the military appointed as Vicar Apostolic of Military, USA. LT Crotty was an assistant priest at St. Columbia’s Church in New York City from 1937 until 1943 when he enlisted in the US Navy. LT Crotty enlisted on 7 May 1943 in the US Navy Reserves and was appointed for special service in the Chaplains Corps at the rank of LTJG. He attended class 10-43 of the US Navy chaplains’ school, in session from 24 May to 18 July 1943, where he graduated as a Roman Catholic Chaplain. After completing the Navy Chaplains School, he was assigned to Marine Base Quantico serving from 23 July to 24 May 1944. Following this assignment, he was then reassigned to the 43rd NCB (Naval Construction Battalion, also known as the Seabees) from 7 June 1944 until 14 August 1944, and later served as part of the 8th NCB Seabees. He was promoted to the rank of LT on 1 August 1944. Per his family story, he was at the Battle of Iwo Jima, although when he arrived there is unclear. He returned from his time in the Pacific on the USS Henrico (APA-45) and was released from active duty on 10 April 1946. He was officially discharged from the USNR on 15 October 1954. LT Crotty died in New York on 7 July 1995 having served his entire life as a man of the cloth. Effects of LT Crotty were donated to the Naval History and Heritage Command in 1995, including this stole and a collection of photos.

The chaplain is a religious minister, commissioned as an officer in the US armed forces, and attached to military units to serve as a spiritual advisor. They are ordained in their own religion but are trained to serve people of all faiths. Chaplains commissioned in the Navy can serve with the Navy, Marine Corps, and Coast Guard.

Each chaplain carries their own vestments respective to their religion. The stole is used by Catholic, Christian, and Orthodox chaplains. It is a badge of ordained ministry and is conferred at ordination. The small purple stole worn by LT Crotty is used by Catholic priests while performing the sacraments of confession and last rites. The color purple is a sign of mourning and penance.