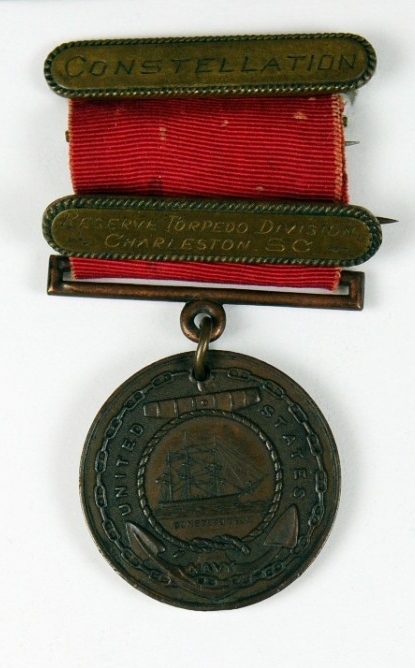 One U.S. Navy Good Conduct Medal. Circular bronze medal with red suspension ribbon. The center of the obverse side of the medal is a depiction of the USS Constitution. The image has a circular rope border with an anchor underlay. The edge of the medal has a chain border. Between the rope and chain borders are the words “United States Navy.” The reverse side of the medal is engraved “C.S.C. / No. 9766 / John Murnane / U.S.S. / Wabash / May 31, 1905.” The medal is bordered by the words "Fidelity / Zeal / Obedience" around the perimeter. A suspension ring attaches to an straight ribbon bar. The ribbon has the devices "Constellation" and "Reserve Torpedo Division / Charleston. SC."

The Navy adopted a new style of Good Conduct Medal in 1885 that was used until minor changes were made in 1961. The Type III medal was a Good Conduct medallion suspended from an all red ribbon with a suspension ring attaching to a ribbon bar with an un-tapered ribbon. Enlistment bars, denoting each honorable enlistment completed, were pinned on the ribbon as attachments. The pins were later changed to slip on bars. In the 1950s, bronze and silver stars replaced the enlistment bars, with one silver star worn in lieu of five bronze stars. 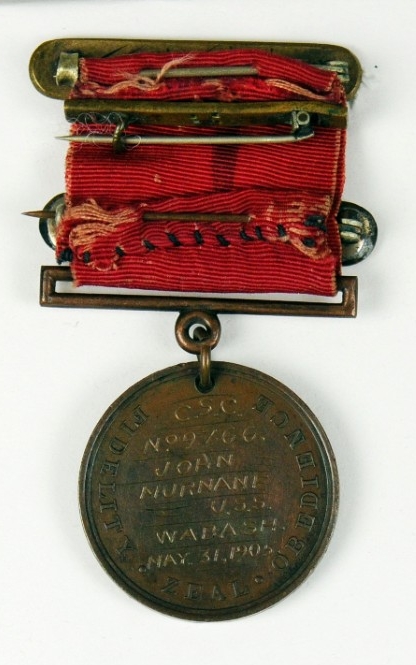