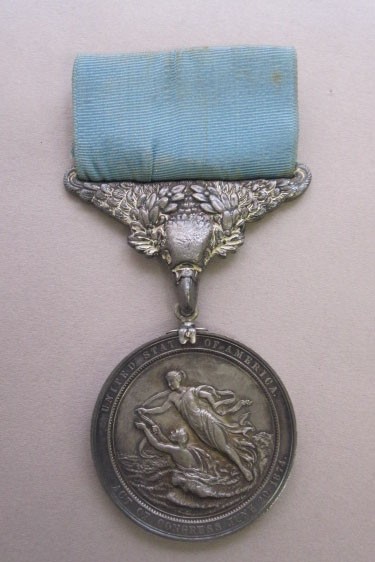 One silver Lifesaving award medal. In the middle of the is an image of a Nike flying over water and saving a man form drowning. Around the edge of the image is the inscription // United States of America / Act of Congress June 20 1874 // The reverse of the medal is engraved // To / Chester W. Nimitz, / For Bravely / Saving A Man / From Drowning / March 20, 1912 // The edge is inscribed //In Testimony of the Heroic Deeds in Saving Life From the Perils of the Sea // The medal is suspended from a blue ribbon via an eagle head clasp.

The silver Lifesaving Medal issued by the United States Coast Guard was established 20 June 1874. Originally awarded by the Department of the Treasury, it is one of the oldest medals in the United States. While not a military decoration, the medal is awarded for acts of gallantry and saving lives from perils of the sea. The medal has been through 3 design changes, with this medal being design version 2. This silver Lifesaving medal was awarded to LT Chester W. Nimitz on the monitor Tonopah on March 20, 1912 after Nimitz rescued Fireman Second Class W. J. Walsh from drowning after falling overboard. 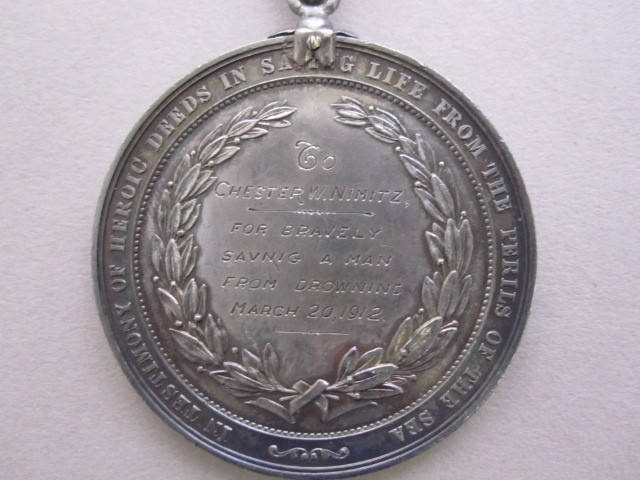