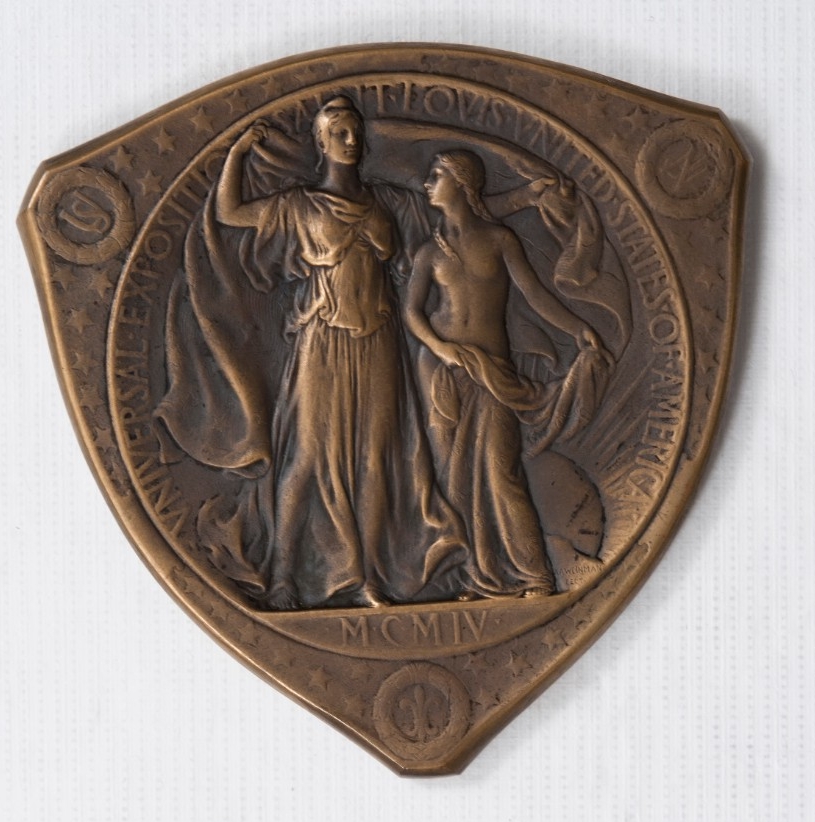 One bronze medal commemorating the Louisiana Purchase Exposition, also known as the 1904 St. Louis World’s Fair. The medal is triangular in shape. The obverse has two female figures above the date MCMIV. The taller is Columbia with raised arms wrapping the American flag around the smaller maiden, representing the Louisiana Purchase Territory. There is a rising sun in the lower section behind the maiden. The depiction is encircled with text reading "Universal Exposition/Saint Louis/United States of America.” The reverse of the medal has an eagle with outspread wings standing on a tablet with branches of oak and laurel in its talons. The tablet is marked "Commemorative Medal/Louisiana Purchase/Exposition." Below the tablet are two dolphins. There is a small wreath at each corner. The left wreath contains the letters US; the right wreath the letters NJ; the lower wreath a fleur-de-lis. Fourteen stars border each wreath. The letters NJ represent the initials of Jefferson and Napoleon. The same pattern is repeated on the obverse.

The Louisiana Purchase Exposition commemorated the centennial of the Louisiana Purchase, executed by President Thomas Jefferson and French Emperor Napoleon Bonaparte in 1803. The fair ran from April to December 1904. More than sixty countries and forty-three of the forty-five American states participated in the fair.

The host state, Missouri, had the most opulent of the state buildings. One of the prides of the Missouri building was the display of the bell for the newly constructed USS Missouri (BB-11). Missourians had raised money to cast a bell for the ship. Displayed in the west wing of the Missouri building, it was to be presented to the Navy when the fair ended. Two weeks prior to the closing of the fair, a fire broke out in the Missouri building. A call to "save the bell" was made upon seeing the fire. A squad of Marines stationed nearby on the fairgrounds jumped into action, rushing into the burning building to rescue the bell. After successfully retrieving the bell and several thousand pieces of art, artifacts, and books that were also on display, the dome of the great building collapsed. In June 1905, the bell was delivered to the ship as promised. The bell was aboard the great ship when she joined President Theodore Roosevelt’s around-the-world cruise of the Great White Fleet in 1909.

One of the most popular exhibits at the fair was Boynton’s Naval Exhibit. Twenty-eight scale model ships recreated the Spanish-American War battles of Manila and Santiago Bay. The ships consisted of eight battleships, four cruisers, Dewey’s flagship Olympia, a torpedo boat fleet and a submarine, as well as several enemy vessels. The ships varied in length from twelve to twenty-one feet. Built of steel, they were fully armed and equipped with flags, signals, searchlights, and propelled by electric motors powered by an operator hidden inside each boat. The guns used real explosives and could be heard all over the fairgrounds. The naval battle included an explosion of a powder magazine in the enemy fort, two enemy vessels destroyed by torpedoes, and an enemy battleship sunk by a direct hit from an American cruiser. Though the Navy did not sponsor the exhibition, its popularity shows the fascination with the Navy in the American imagination, coming barely six years after the defeat of the Spanish fleet during the Spanish-American War. 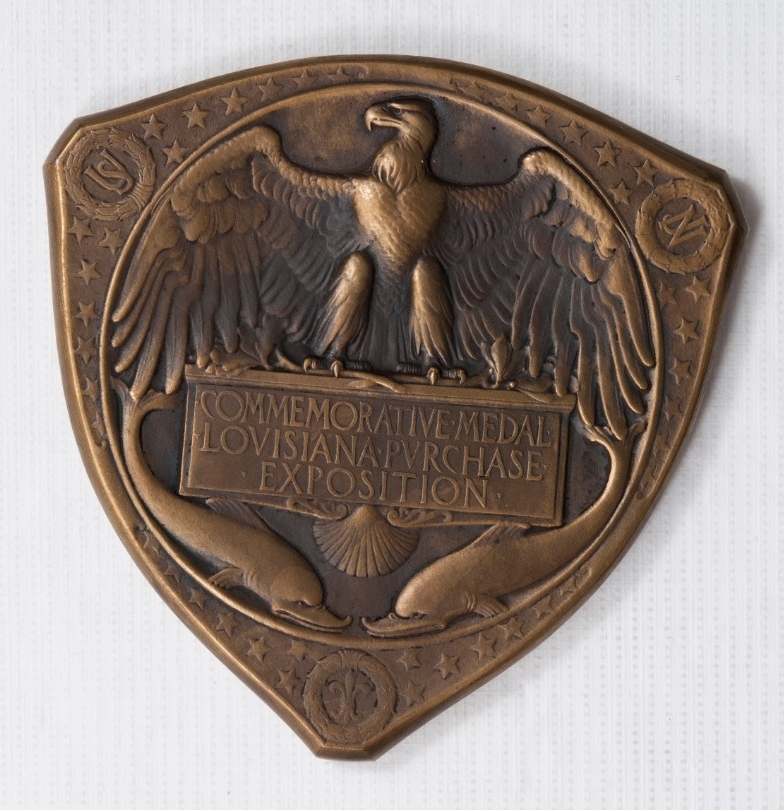