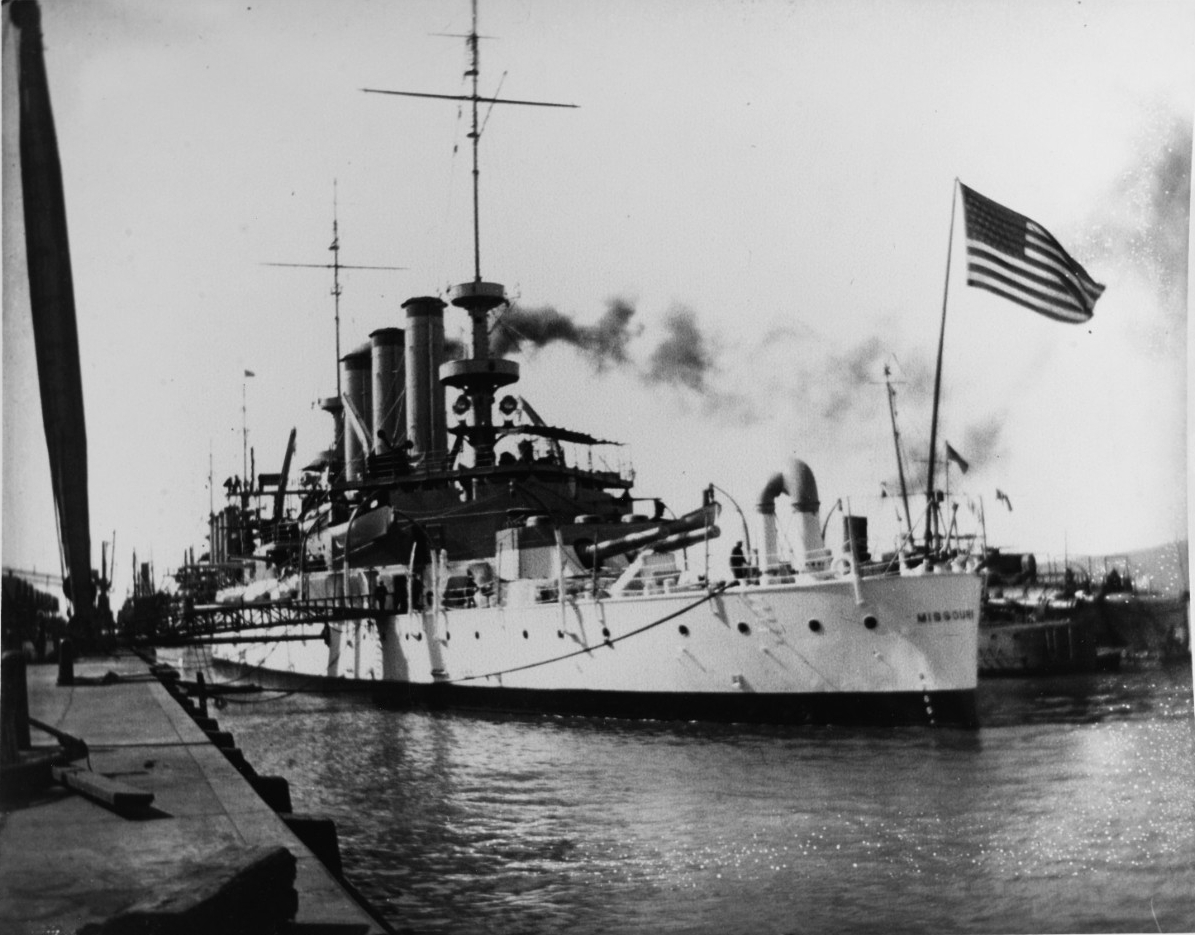 Assigned to the North Atlantic Fleet, Missouri left Norfolk on 4 February 1904 for trials off the Virginia capes and fleet operations in the Caribbean. On 13 April, during target practice, a flareback from the port gun in her after-turret ignited a powder charge and set off two others. No explosion occurred but the rapid burning of the powder suffocated 36 of the crew. Prompt action prevented the loss of the warship and three of her crew were awarded Medals of Honor for extraordinary heroism. After repairs at Newport News, Missouri sailed on 9 June for duty In the Mediterranean from which she returned to New York on 17 December.

Fleet operations along the East Coast and in the Caribbean during the next years were highlighted by her relief to earthquake victims at Kingston, Jamaica (17-19 January 1907). In April she took part in the Jamestown Exposition.

With the "Great White Fleet," Missouri sailed from Hampton Roads on 16 December 1907, passing in review before President Theodore Roosevelt at the beginning of a world cruise which was to show the world that American naval might could penetrate any waters. Calling at ports in the Caribbean and along the east coast of South America, the fleet rounded Cape Horn to call in Peru and Mexico before arriving San Francisco on 6 May 1908 for a gala visit. In July the fleet turned west for Honolulu, New Zealand, and Australia, arriving in Manila on 2 October. The most tumultuous welcome yet came in Yokohama, and with a call in Amoy, China, the fleet began the passage home by way of Ceylon, Suez, and ports in the eastern Mediterranean. Departing Gibraltar on 6 February 1909, the fleet was again reviewed by President Roosevelt upon its return to Hampton Roads on 22 February.

Placed in reserve at Boston on 1 May 1910, Missouri was recommissioned on 1 June 1911 and resumed east coast and Caribbean operations with the Atlantic Fleet. In June 1912 she carried marines from New York to Cuba where they protected American interests during a rebellion. The next month the battleship carried midshipmen for training, then decommissioned at Philadelphia on 9 September 1912. 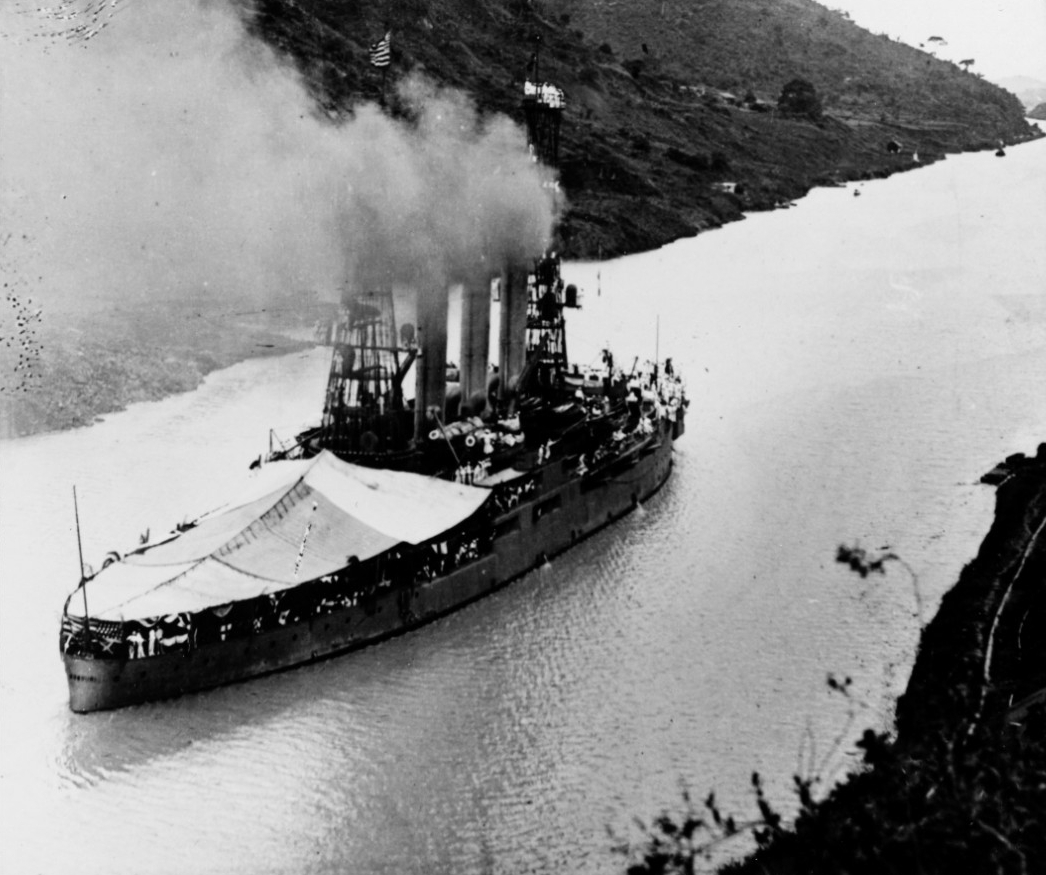 Missouri (BB-11) transits the Panama Canal, circa 1914-15. She was reportedly the first battleship to pass through the canal when it opened in 1914. The original photograph was published on a stereograph card by the Keystone View Co. Donation of Louis Smaus, 1984. U.S. Naval History and Heritage Command photograph. Catalog#: NH 85944.

Upon the entry of the U.S. into the Great War [6 April 1917], Missouri was recommissioned on 23 April 1917, joined the Atlantic Fleet at Yorktown, Va., and operated as a training ship in the waters of Chesapeake Bay. On 26 August 1917, Rear Adm. Hugh Rodman broke his flag in Missouri as Commander, Division 2, Atlantic Fleet, and the warship continued to train thousands of recruits in engineering and gunnery for service in warships and as armed guards for merchant vessels.

Following the Armistice, the battleship was attached to the Cruiser and Transport Force, departing Norfolk 15 February 1919 on the first of four voyages to Brest to return 3,278 U.S. troops to east coast ports.

Missouri decommissioned at Philadelphia Navy Yard on 8 September 1919, and while inactive was redesignated as BB-11 on 17 July 1920.

Sold to J. G. Hitner and W. F. Cutler of Philadelphia on 26 January 1922, she was scrapped in accordance with the treaty limiting naval armaments.

More detailed history is in preparation. 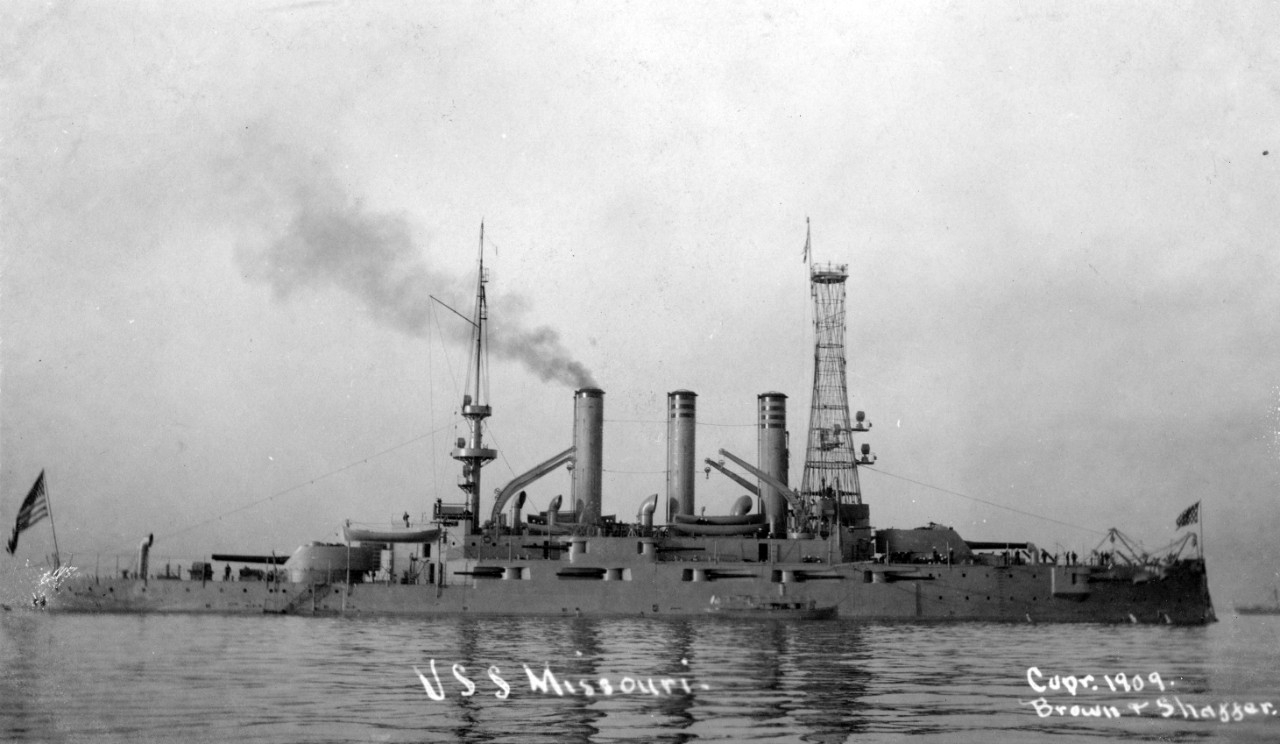 Missouri (Battleship #11) photographed by Brown & Shaffer during the last half of 1909, after she had been fitted with a cage foremast. Collection of Chief Quartermaster John Harold. U.S. Naval History and Heritage Command photograph. Catalog#: NH 101511.