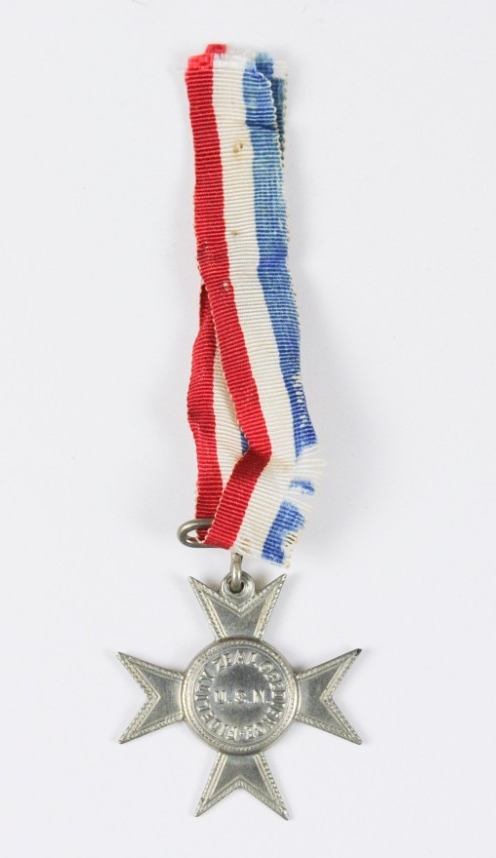 Good Conduct Medal Type I, Maltese cross, nickel, of the type issued between 1870 and 1884. Obverse: “FIDELITY – ZEAL – OBEDIENCE” in a circle with “U.S.N.” in the center. The first recipients were Sailors returning from a European cruise aboard sloop-of-war Iroquois (NHHC 1971-586-B/Obverse). 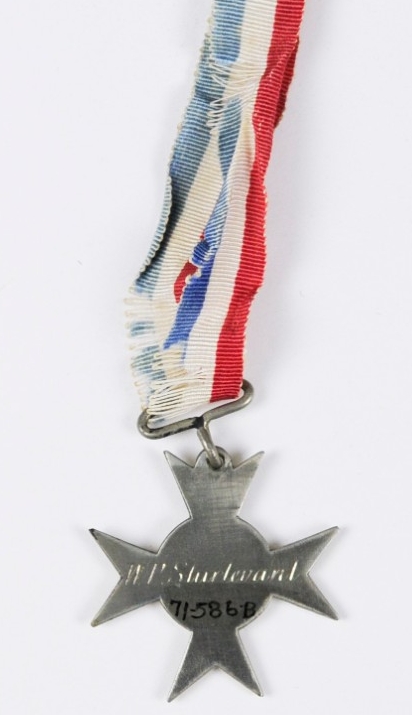 Reverse: blank but for the recipient’s name engraved in script. This medal, the first Good Conduct Badge, was produced by E.V. Haughwont Co. of New York City. A one-half inch wide red, white, and blue ribbon was supplied without a suspension pin (NHHC 1971-586-B/Reverse).

The Navy’s first Good Conduct Medal—called the Good Conduct Badge—looked nothing like today’s. First authorized on 26 April 1869, for “obedience, sobriety, and cleanliness” as well as proficiency in “gunnery and seamanship,” the decoration came in the shape of a Maltese cross of nickel, the center of which was rounded out by a medallion.1 In the 1880s, the Navy had the medal redesigned in the form of a bronze planchet that has stayed more or less the same for the last 135 years.2 But whereas the medal itself changed little after 1884, the criteria for receiving it shifted in response to a process of modernization underway since the end of the nineteenth century.

The Good Conduct Medal reflects the later 19th-century approach to Navy enlistment, quite different from today’s. In the post–Civil-War period, when a man enlisted, his enlistment entailed a single cruise on a single ship. Returning to port for an extended period meant discharging all of the enlisted men, some of whom—on recommendation of the commanding officer—might be eligible to reenlist for a cruise at a later date.

Bereft of their crew upon return to port, Navy commanding officers, who were often responsible for recruiting their own Sailors, now had to scramble to find trained seamen willing to forgo opportunities offered by the merchant marine, which often promised better pay, better living conditions, and better treatment.3 Although the Panic of 1873 and the subsequent “Great Depression” of the 1870s to the 1880s helped reduce labor-market competition, better opportunities on civilian vessels persisted.4 For the Navy, then, quality sailors were hard to come by. Alcoholism, criminality, insubordination, and desertion were rampant.5 It is likely that in the two decades after the Civil War, a full one-eighth of the U.S. Navy personnel deserted every year.6 What could officers do to retain talent and improve the pool? The Good Conduct decoration was among the solutions.

Before the Good Conduct Badge, the Navy’s only medal had been the Medal of Honor, a product of the Civil War. That decoration had been in recognition of extraordinary heroism, which made sense in a time of mass mobilization. But after the war, with the peacetime return to a professional force of sailing ships, the Navy now placed a premium on seamen trained to do a job day in, day out.7 The Good Conduct Badge was supposed to help incentivize reenlistment of already trained Sailors and, as such, it passed only to men after their second period of service.8

The Good Conduct Badge (Medal after 1896) was one in a series of attempts since before the Civil War to ease the shortage of trained seamen willing to re-enlist in the Navy.9 By 1855, a Sailor could expect a modest raise and what amounted to a paid vacation—up to four months’ free wages—between enlistments.10 Then in 1865 the Navy authorized the Honorable Discharge Badge, a 2.5-inch patch in the shape of a foul anchor, to be sewn onto the sleeve and appended with a half-inch star for every additional honorable discharge over the course of a career.11 This practice helped distinguish the strong from the weak and might have instilled pride in good conduct at sea. At any rate, desirable enlistees, already trained by a cruise at sea with the Navy, could now be easily identified. Finally, to encourage reenlistment, the Secretary of the Navy authorized the first Good Conduct decoration, the Maltese-cross-shaped medal for “fidelity, zeal, [and] obedience,” provided the Sailor had re-enlisted and completed his second cruise.12

More meaningful than the medal, however, would have been the monetary reward that came in conjunction with reenlistment. To claim it, a Sailor had to show his Good Conduct Badge and honorable discharge papers. (Twenty years of good conduct, moreover, got him a pension in some cases and, in other cases, admission to a naval hospital or home.) The Good Conduct Badge, the modest pay raise, and the paid vacation, all of which continuous-service men could enjoy after 1869, became the trifecta of incentives that the Bureau of the Navy offered its most accomplished enlisted men.13 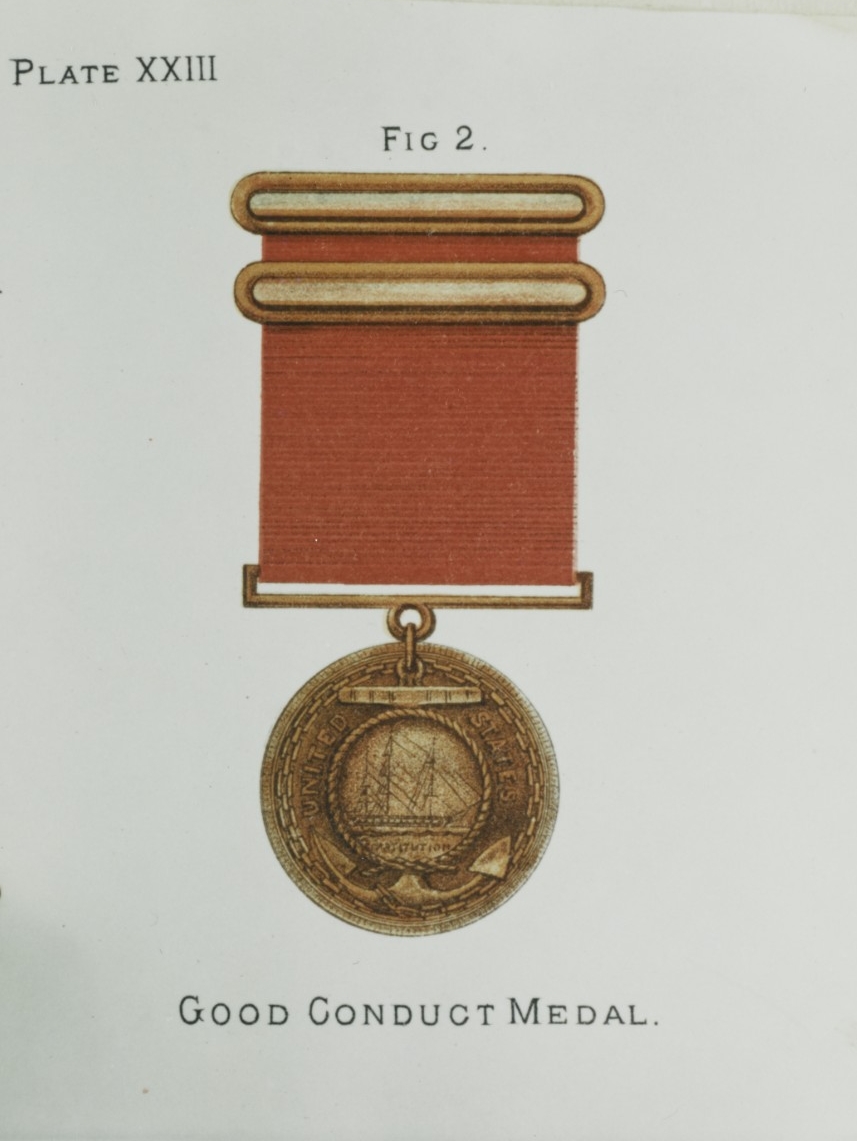 Good Conduct Medal with ribbon, as shown in U.S. Navy Regulations of 1886. An all-red ribbon replaced the former red, white, and blue style. The reverse of the medal continued to bear the name of the recipient, but additional information such as the Sailor's continuous service number, discharge date, and ship name, now was to be included. The practice of issuing a new medal for each honorable discharge was also discontinued. Instead, a pin-bar, engraged with the name of the Sailor’s last ship or duty station, was provided. The reverse of the bar was also engraged with the Sailor’s continuous service number and date of discharge in order to prevent the “borrowing” or theft of medals or bars when re-enlistment time rolled around. The use of award bars to recognize repeat awards continued unchanged from 1884 until the 1930s when the name of the ship or duty station was replaced with the engraved year in which the enlistment ended. The year bars stayed in use until World War II when die struck bars for "SECOND AWARD,” “THIRD AWARD,” etc. were authorized. The use of all bars was discontinued in approximately 1950, being replaced with the 3/16" bronze and silver stars in use today. Each bronze star represents one additional good conduct enlistment. A silver star is worn in lieu of five bronze stars (NH 123249).

The Navy’s approach to recruitment and retention took a more systematic approach only at the end of the 19th century.14 By the 1890s, U.S. foreign policy had begun to gravitate toward imperialism, and imperialism required above all a competitive fleet of steam-powered ships.15 In face of the need for thousands more Sailors to man a steel armada of ocean-going vessels, the Navy’s recruitment and retention practices had to change.16 By extension, the criteria for awarding the Good Conduct Medal would also need adjustment.

The Spanish-American War in 1898 transformed the Navy’s fitful, uneven process of modernization into a robust and overarching one.17 In the midst of the conflict, a Congressional committee’s report of May 1898 recommended sweeping changes, including the institution of fixed-term enlistments as a way to provide continuity of personnel for these most modern, complex, steam-powered ships of the line.18 The changes became law with the Naval Personnel Act of 1899.19

A few years later, in the spirit of incentivizing good conduct and reenlistment, the Navy further increased annual pay for holders of a Good Conduct Medal.20 The bonus continued to increase, as did standard pay for enlisted men—another incentive to staying with the Navy.21

As the twentieth century progressed, the criteria for receiving the Good Conduct Medal ultimately landed on a path of steady democratization: The requirements of a past honorable discharge and reenlistment within three months fell away, and other criteria began to take their place.22

In the 20th century, the Good Conduct Medal’s criteria came to prioritize proficiency in rating.23 (New ratings proliferated with the transition to steam power.) By 1914, marks in rating—on the scale of 1 to 5—were part of the equation. To earn the Good Conduct Medal, a junior Sailor needed a minimum average of 4 in his area of proficiency, while a petty officer needed 4.5. (Both required 4.5s in sobriety and obedience.24) Soon after, the threshold came down to threes and eventually twos, ensuring that the majority of reenlisting Sailors would receive the Good Conduct Medal almost as a matter of course after World War I.25 And after the next World War, a well-behaved, hardworking Sailor could expect to receive the Good Conduct Medal in his first period of enlistment and after a single term of three years.26 His or her counterpart of the 1890s would have needed an honorable discharge, a reenlistment, and eight years of service before seeing the same medal.27

There were now better ways than a medal to retain skilled labor, and these had to do not only with compensation and benefits, which had steadily increased since the nineteenth century, but also with the Navy’s 20th-century commitment to training its recruits and with the cultural shift in how people saw Navy service—as a career, not a last resort, as had often been the case in the 19th century.

Finally, the transformation of life aboard ships did more than any medal could do to make the Sailor’s life more attractive. As historian Frederick Harrod observes, the great vessels of the new Navy were now spacious and advanced enough for unprecedented amenities: bunks (instead of hammocks), clean water, plumbing, barbershops, libraries, recreation rooms, laundries, electric lighting, forced-air ventilation, dishwashing machines, and refrigeration. As early as 1906, the Maine-class battleship Missouri (Battleship No. 11) even had her own electric ice-cream maker.28 Sea service to the United States was no longer the existential trial it must have been in the nineteenth century.

The Navy of 1869—the Navy that had established the Good Conduct Badge—faced issues of morale, discipline, and safety that the modern Navy does not know. In our age, the Good Conduct Medal serves a different purpose: It is a rite of passage and an honor, to be sure, but its historical role as part of a reenlistment strategy has gone the way of canvas topsails and gilded figureheads.

18 George E. Foss and the Committee on Naval Affairs, Personnel of the Navy, Report No. 1375; submitted to the House of Representatives to accompany H.R. 10403; 55th Congress, 2nd Session (Washington, DC: Government Printing Office, 1898). In fact, fixed-term enlistments were already available in many ratings. The 1899 legislation affirmed fixed-term enlistments as the Navy’s new standard.

19 This legislation also gave engineers a place in the officer corps and reformed the entire systems of recruiting, enlistment, training, and retirement.