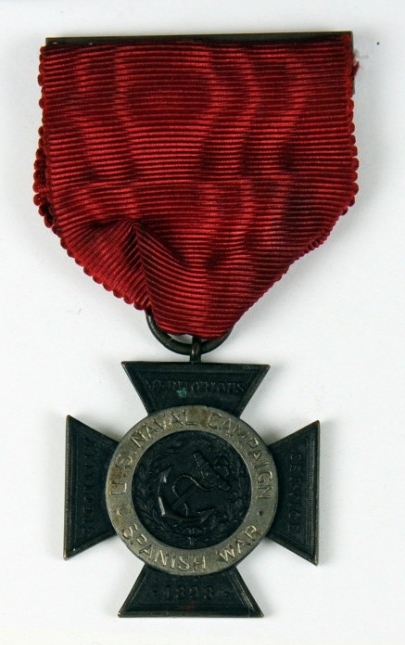 One Specially Meritorious Service medal awarded to Paymaster William W. Galt. The medal is a Maltese cross with text on each arm reading “Specially / Meritorious / Service / 1898." In the center of the cross is a silver ring engraved “US Naval Campaign Spanish War.” Inside the ring is the image of a foul anchor and a wreath of oak and laurel branches. The reverse of the medal is engraved "Awarded / To / Paymaster / W.W. Galt / U.S. Navy / For Extraordinary Heroism / In bringing in a launch / from Kow Loon to Mirs Bay / The Raleigh’s pump / without which she could not / have engaged in / the Battle of / Manila Bay / with both / of her engines / April 26 1898.” The reverse has a thin bronze plate with the engraving of the actions for the award. The medal is attached to a tapered red ribbon.

Congress authorized the Specially Meritorious Service Medal in March 1901. The award was for officers and men of the US Navy and Marine Corps who rendered specially meritorious service, otherwise than in battle, during the war with Spain.

Mirs Bay (northeastern Hong Kong) was used by the American fleet as a repair facility and refuge during the Spanish-American War. On 25 April 1898, USS Raleigh fell behind the rest of the fleet leaving Mirs Bay when one of her circulating pumps failed, leaving her to function with only one engine. The pump was repaired that night in Kowloon (southern Hong Kong) and returned to the ship, putting her back into action and enabling her to take part in the Battle of Manila Bay only a few days later.

Galt’s medal is modified from the original design. On the original medal, the center ring on the obverse is the same material as the rest of the medal and is embossed “US Naval Campaign West Indies.” In contrast, this medal has an applied silver ring engraved with “US Naval Campaign Spanish War” affixed over the original ring. The reason for the modification is likely because Galt’s act of “Extraordinary Heroism” was not performed in the West Indies. Coincidentally it was the same day the US Congress formally declared war on Spain.

William W. Galt was Paymaster of the USS Raleigh (C-8) during the Spanish-American War. His application for the position of Assistant Paymaster with the US Navy was dated 20 March 1876. He reached the rank of Paymaster by 1893 when he was dispatched for duty to Norfolk. He served in the Navy for 50 years and earned the rank of Captain. 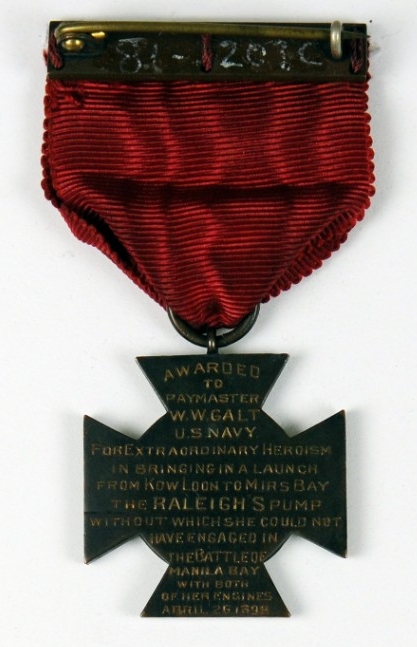