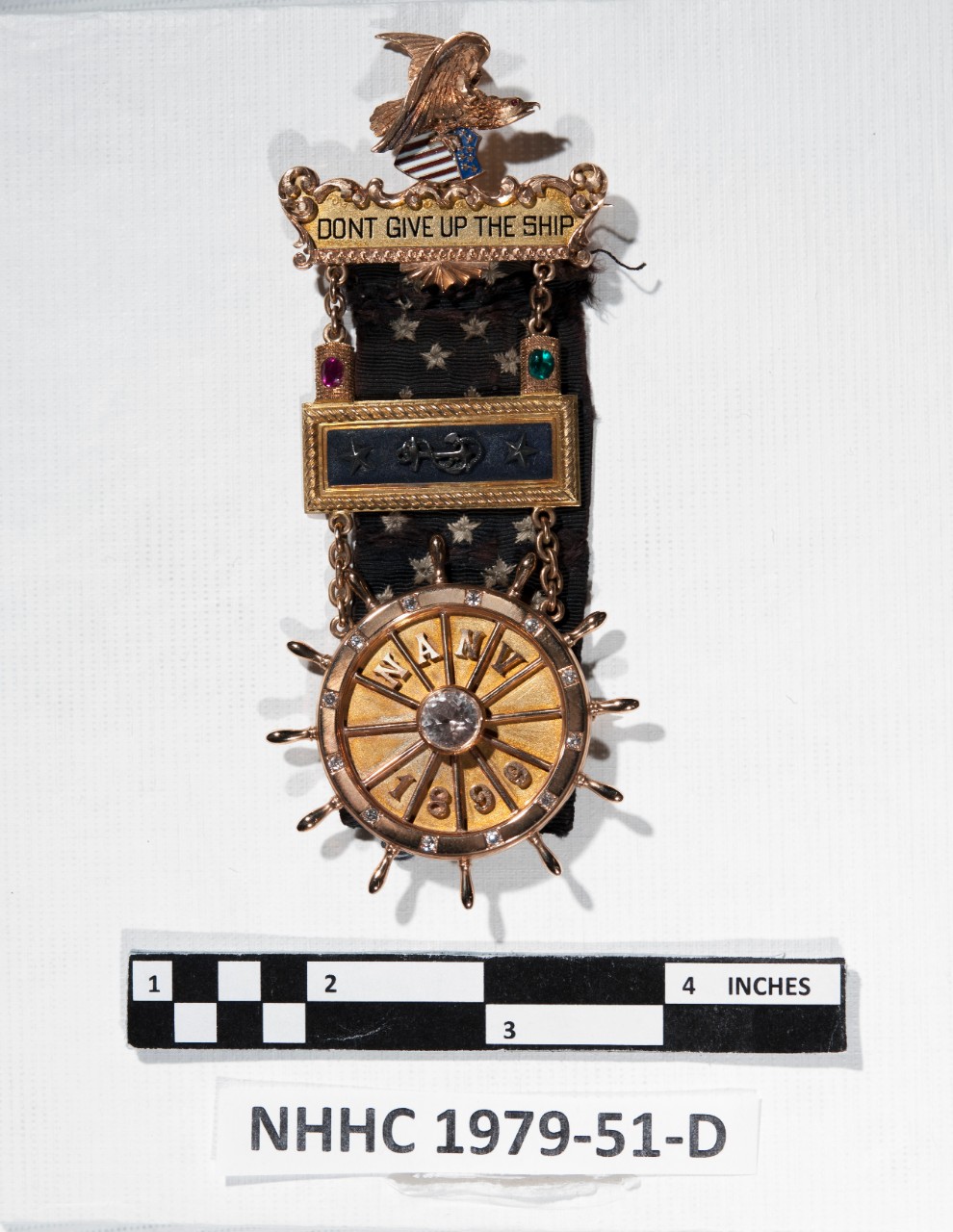 National Association of Naval Veterans commemorative medal, 1899. The medal has three sections with chains connecting each section. The top is a plaque with the text "DON’T GIVE UP THE SHIP" bordered by scroll work along the top and sides with a cresting fin along the center bottom. Attached to the top is a profile view of an eagle holding an American shield in its talons. The eagle has a red jewel encrusted eye. The center section of the medal bears the rank of Rear Admiral with a fouled anchor flanked on either side by a star. There is a rope border around the blue field. On top of the bar there is a ruby and an emerald. The reverse side is inscribed // Presentation by / Rear Admiral / W.T. Sampson U.S.N. / Sept. 8.99 //The bottom section of the medal is a helm wheel beset with diamonds around the outer rim of the wheel and one large diamond in the center. Between the spokes of the helm is the text // NANV 1899 // The reverse side is inscribed // PRESENTED TO REAR ADMIRAL / J.F.R. FOSS / BY THE NAT’L ASS’N OF / NAVAL VETERANS. U.S. of A / AND OTHER FRIENDS-PHIL’A / SEPT 1899 // The medal is backed by a blue silk ribbon with white clusters of stars.

Landsman James F.R. Foss served during the Civil War from 1862-1863. He served on four ships during his time in the Union Navy including the USS Sabine, USS Niagara, USS Hartford, and USS Savannah. He was 16 years of age at the time of his discharge. He spent his post-Navy career as a bookkeeper and clerk for various banks throughout the country, becoming president of Nicolette National Bank in Minneapolis, MN in 1888. Foss became a member of the National Association of Naval Veterans and Grand Army of the Republic, attaining the elected rank of Rear Admiral, the highest in the organization, in the former.  Foss died in 1920, and is buried at Lakewood Cemetery in Minneapolis.

The National Association of Naval Veterans (NANV) was formed in 1887. It was an outgrowth of regional veteran organizations, with the first organizing in 1867 in Philadelphia. The NANV was similar to the Grand Army of the Republic (GAR) in many respects. Membership in the NANV was open to all those who served in the Union Navy, Marine Corps, and Revenue Marine service between April 12, 1861 and August 25, 1865.  Their mission was to promote and support naval veterans who had served during the Civil War.