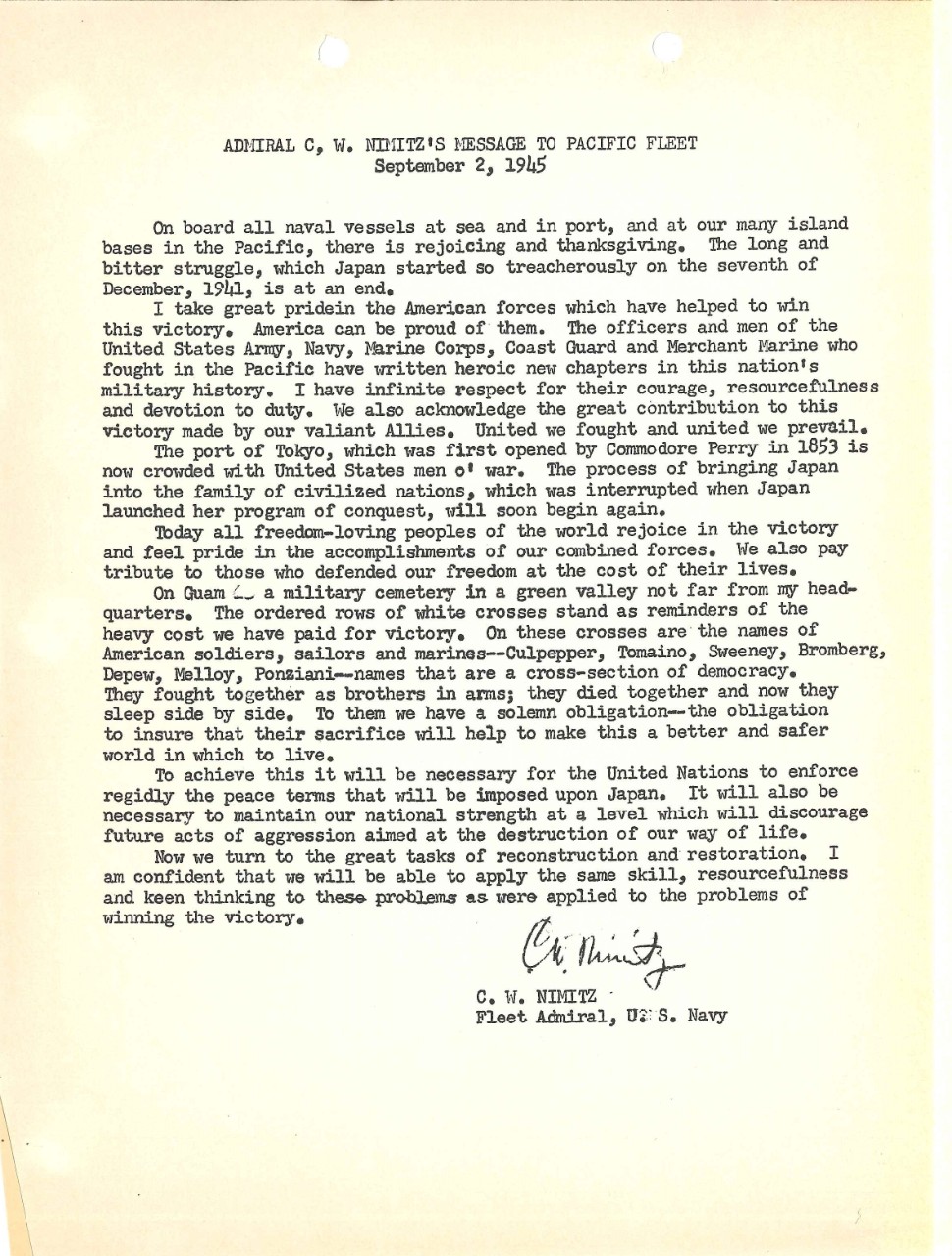 On board all naval vessels at sea and in port, and at our many island bases in the Pacific, there is rejoicing and thanksgiving. The long and bitter struggle, which Japan started so treacherously on the seventh of December, 1941, is at an end.

I take great pridein [sic] the American forces which have helped to win this victory. America can be proud of them. The officers and men of the United States Army, Navy, Marine Corps, Coast Guard and Merchant Marine who fought in the Pacific have written heroic new chapters in this nation’s military history. I have infinite respect for their courage, resourcefulness and devotion to duty. We also acknowledge the great contribution to this victory made by our valiant Allies. United we fought and united we prevail.

The port of Tokyo, which was first opened by Commodore Perry in 1853 is now crowded with United States men o’ war. The process of bringing Japan into the family of civilized nations, which was interrupted when Japan launched her program of conquest, will soon begin again.

Today all freedom-loving peoples of the world rejoice in the victory and feel pride in the accomplishments of our combined forces. We also pay tribute to those who defended our freedom at the cost of their lives.

On Guam is a military cemetery in a green valley not far from my headquarters. The ordered rows of white crosses stand as reminders of the heavy cost we have paid for victory. On these crosses are the names of American soldiers, sailors and marines – Culpepper, Tomaino, Sweeney, Bromberg, Depew, Melloy, Ponziani – names that are a cross-section of democracy. They fought together as brothers in arms; they died together and now they sleep side by side. To them we have a solemn obligation – the obligation to insure that their sacrifice will help to make this a better and safer world in which to live.

To achieve this it will be necessary for the United Nations to enforce regidly [sic] the peace terms that will be imposed upon Japan. It will also be necessary to maintain our national strength at a level which will discourage future acts of aggression aimed at the destruction of our way of life.

Now we turn to the great tasks of reconstruction and restoration. I am confident that we will be able to apply the same skill, resourcefulness and keen thinking to these problems as were applied to the problems of winning the victory.