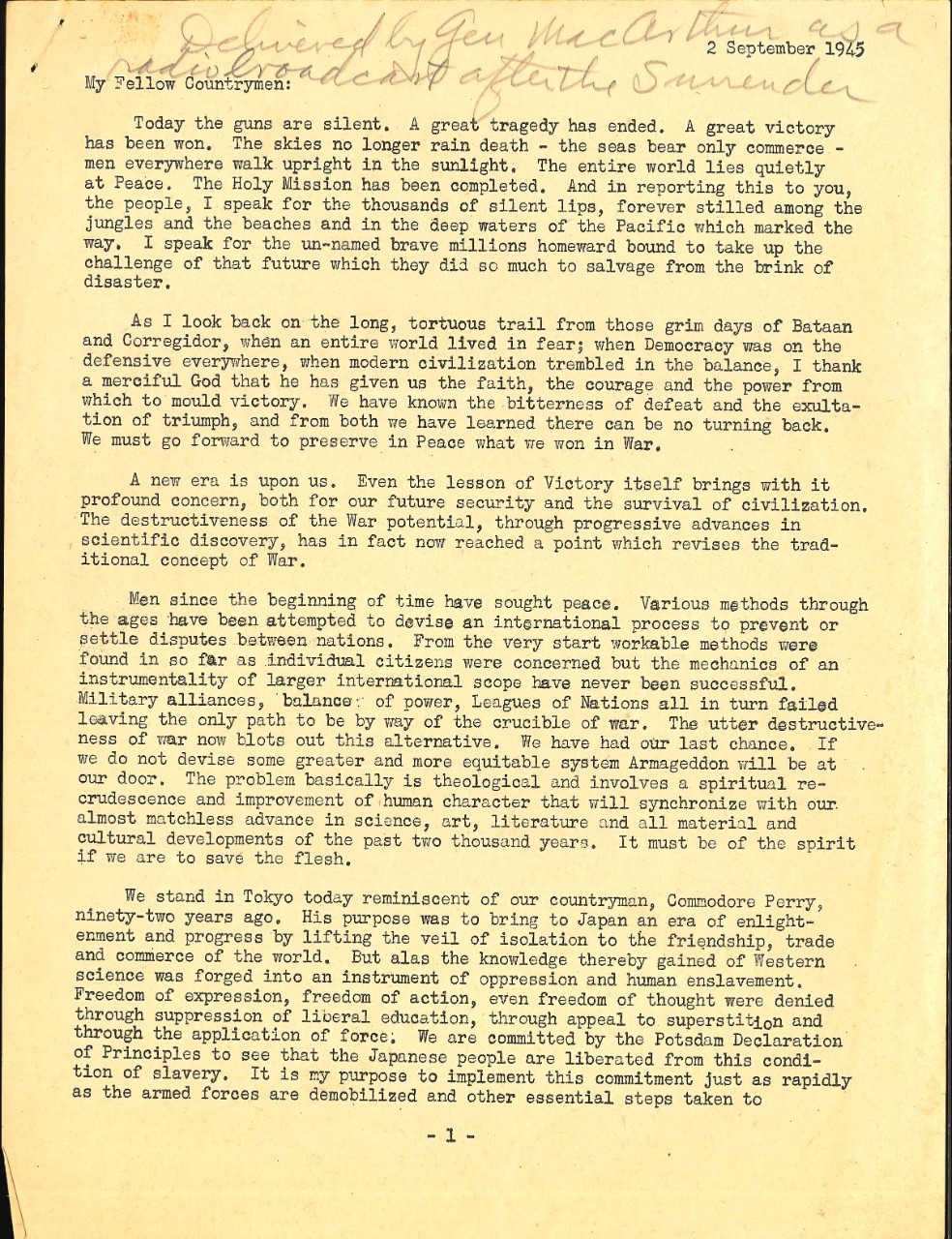 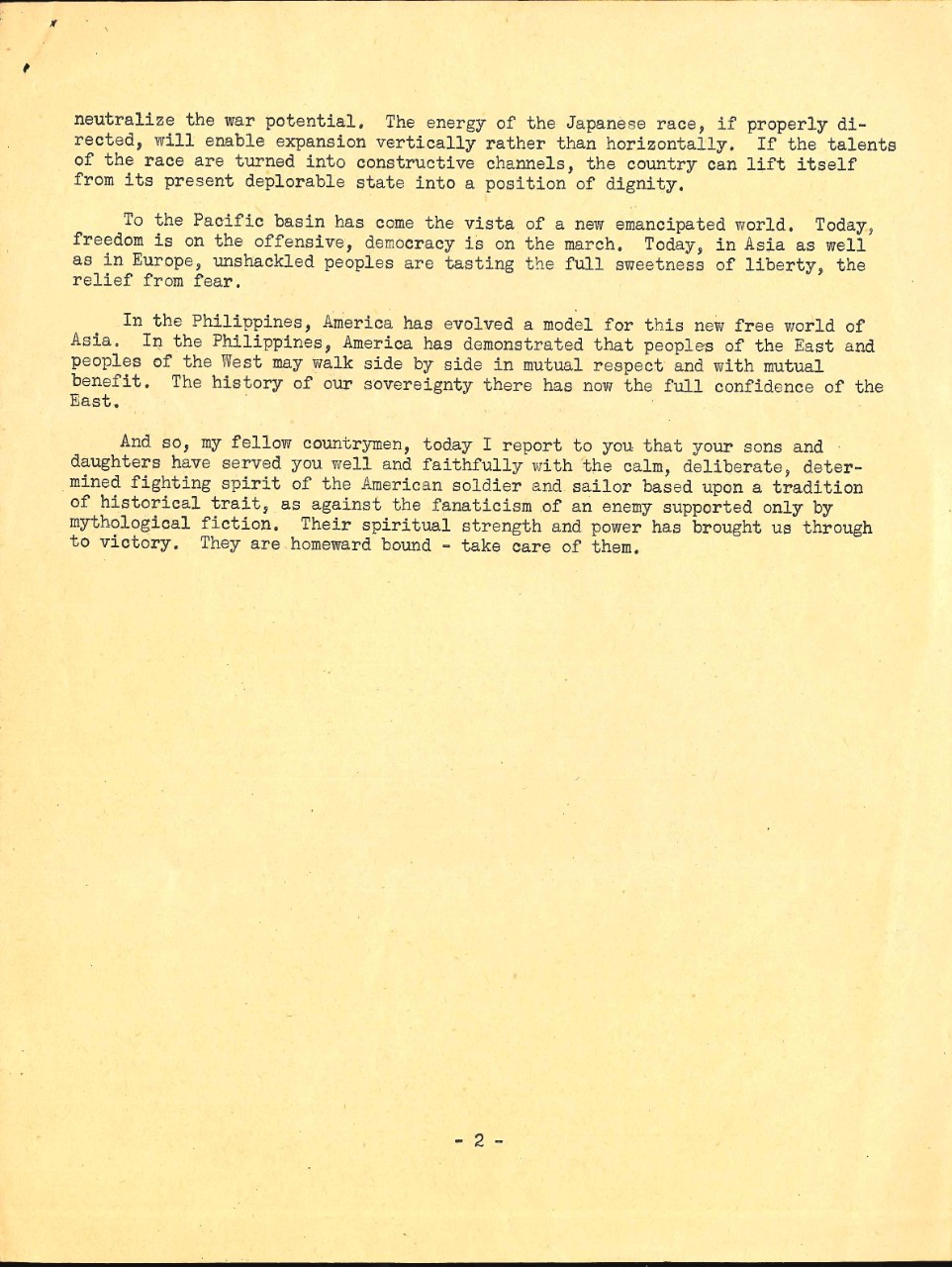 Delivered by Gen. MacArthur as a radio broadcast after the Surrender.

Today the guns are silent. A great tragedy has ended. A great victory has been won. The skies no longer rain death - the seas bear only commerce - men everywhere walk upright in the sunlight. The entire world lies quietly at Peace. The Holy Mission has been completed. And in reporting this to you, the people, I speak for the thousands of silent lips, forever stilled among the jungles and the beaches and in the deep waters of the Pacific which marked the way. I speak for the un-named brave millions homeward bound to take up the challenge of that future which they did so much to salvage from the brink of disaster.

As I look back on the long, tortuous trail from those grim days of Bataan and Corregidor, when an entire world lived in fea; when Democracy was on the defensive everywhere, when modern civilization trembled in the balance, I thank a merciful God that he has given us the faith, the courage and the power from which to mould victory. We have known the bitterness of defeat and the exultation of triumph, and from both we have learned there can be no turning back. We must go forward to preserve in Peace what we won in War.

A new era is upon us. Even the lesson of Victory itself brings with it profound concern, both for our future security and the survival of civilization. The destructiveness of the War potential, through progressive advances in scientific discovery, has in fact now reached a point which revises the traditional concept of War.

Men since the beginning of time have sought peace. Various methods through the ages have been attempted to devise an international process to prevent or settle disputes between nations. From the very start workable methods were found in so far as individual citizens were concerned but the mechanics of an instrumentality of larger international scope have never been successful. Military alliances, balance of power, Leagues of Nations all in turn failed leaving the only path to be by way of the crucible of war. The utter destructiveness of war now blots out this alternative. We have had our last chance. If we do not devise some greater and more equitable system Armageddon will be at our door. The problem basically is theological and involves a spiritual recrudescence and improvement of human character that will synchronize with our almost matchless advance in science, art, literature and all material and cultural developments of the past two thousand years. It must be of the spirit if we are to save the flesh.

We stand in Tokyo today reminiscent of our countryman, Commodore Perry, ninety-two years ago. His purpose was to bring Japan to an era of enlightement and progress by lifting the veil of isolation to the friendship, trade and commerce of the world. But alas the knowledge thereby gained of Western science was forged into an instrument of oppression and human enslavement. Freedom of expression, freedom of action, even freedom of thought were denied through suppression of liberal education, through appeal of superstition and through the application of force. We are committed by the Potsdam Declaration of Principles to see that the Japanese people are liberated from this condition of slavery. It is my purpose to implement this commitment just as rapidly as the armed forces are demobilized and other essential steps taken to neutralize the war potential. The energy of the Japanese race, if properly directed, will enable expansion vertically rather than horizontally. If the talents of the race are turned into constructive channels, the country can lift itself from its present deplorable state into a position of dignity.

To the Pacific basin has come the vista of a new emancipated world. Today, freedom is on the offensive, democracy is on the march. Today, in Asia as well as in Europe, unshackled peoples are tasting the full sweetness of liberty, the relief from fear.

And so, my fellow countrymen, today I report to you that your sons and daughters have served you well and faithfully with the calm, deliberate, determined fighting spirit of the American soldier and sailor based upon a tradition of historical trait, as against the fanaticism of an enemy supported only by mythological fiction. Their spiritual strength and power has brought us through to victory. They are homeward bound - take care of them.