Letter from Charles W. Cooper to his parents, September 5, 1945 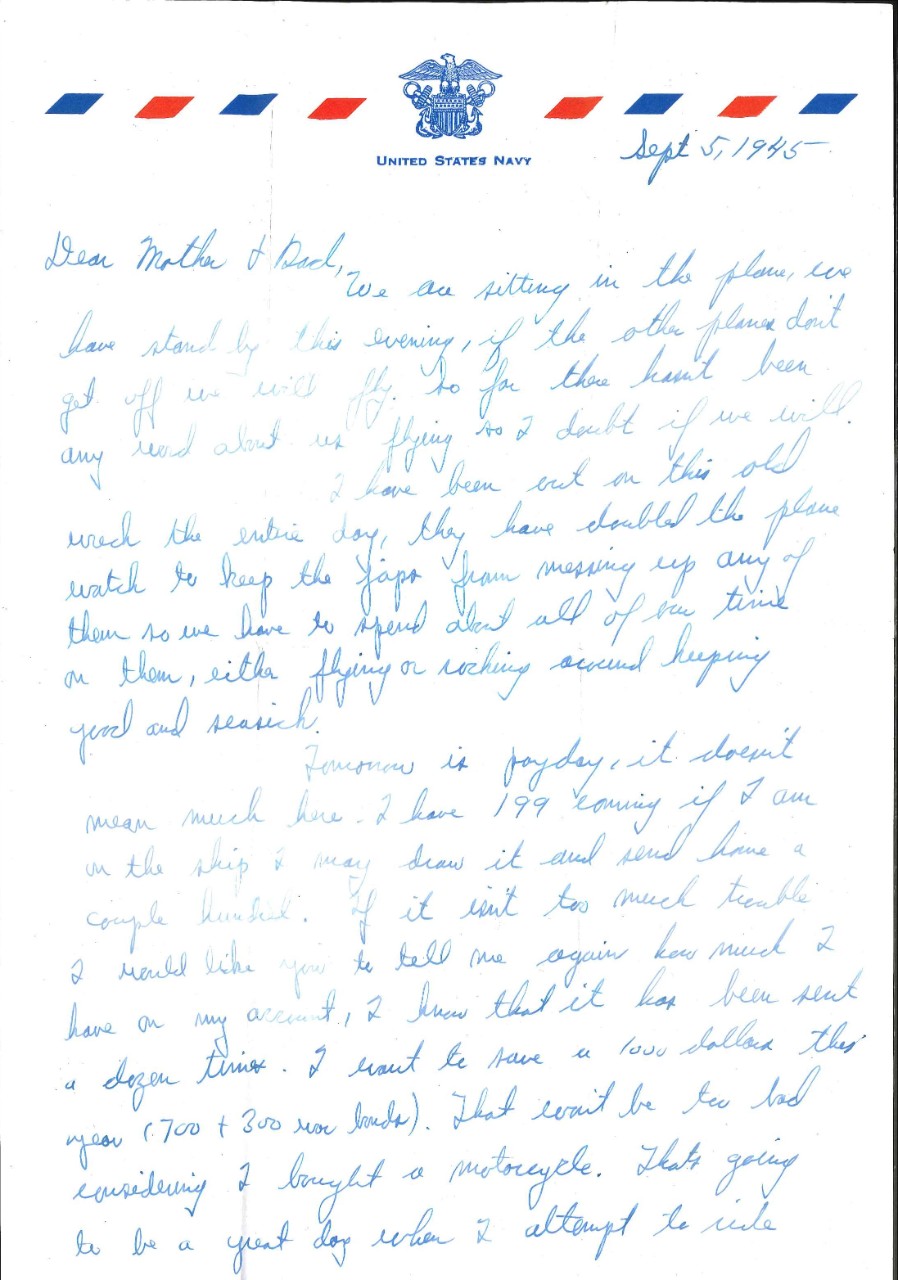 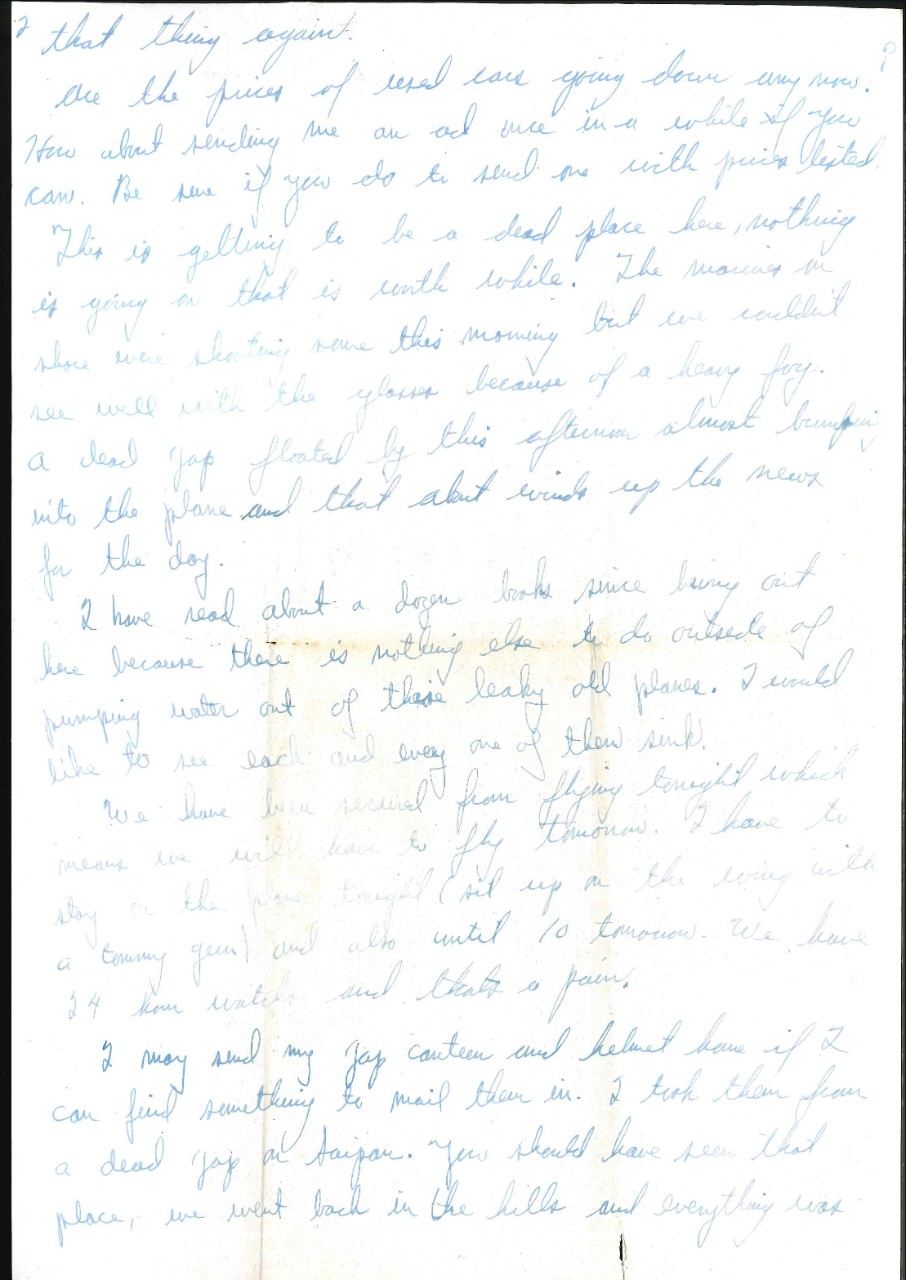 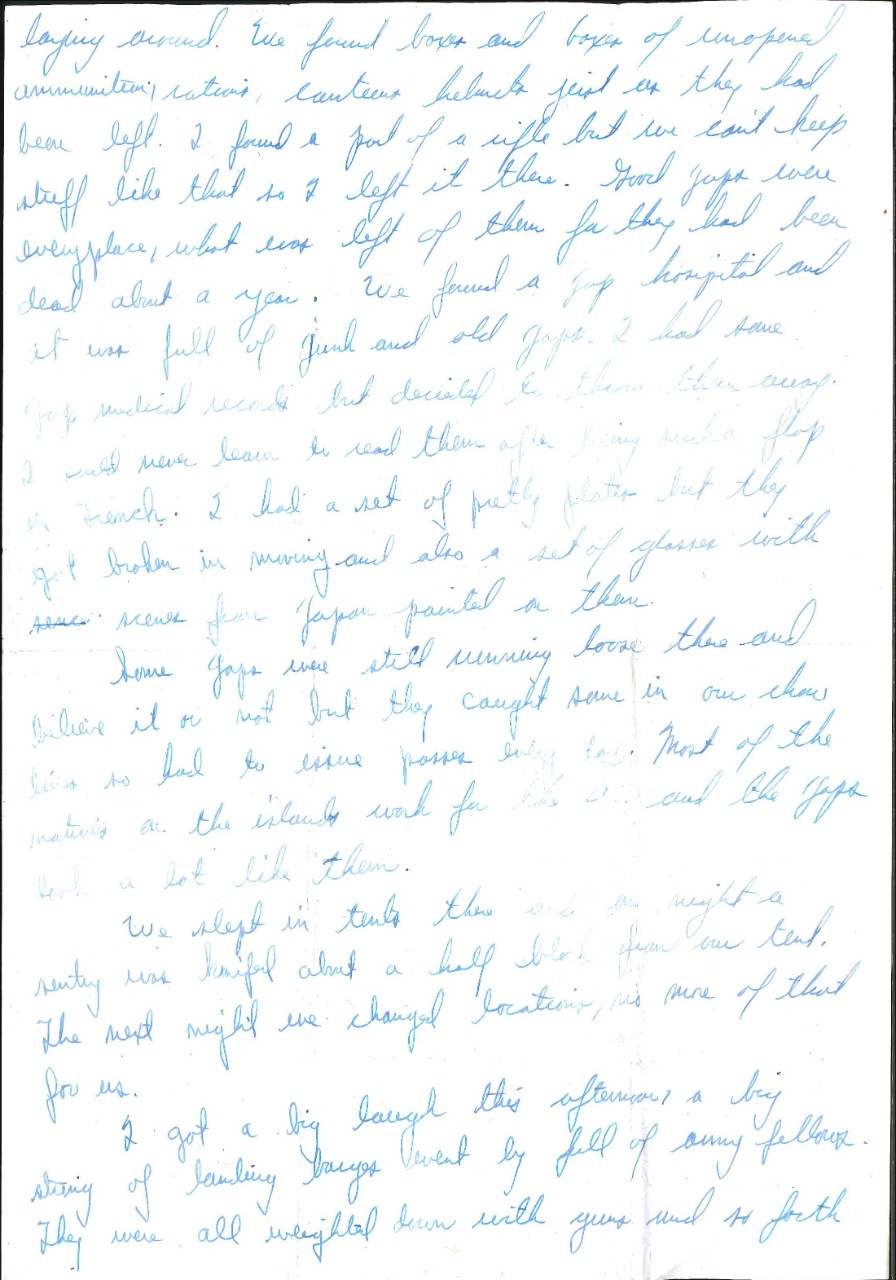 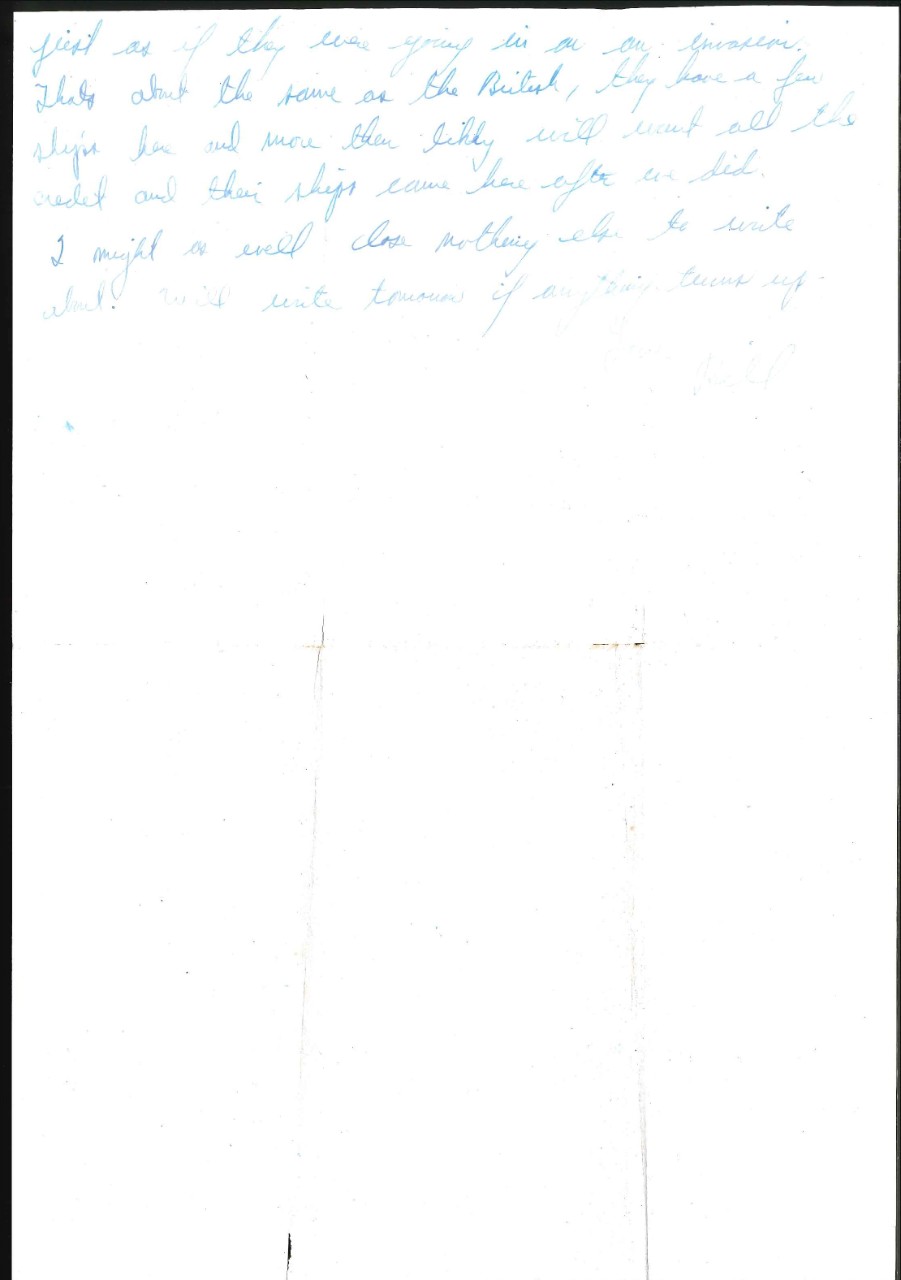 We are sitting in the plane, we have stand by this evening, if the other plane don’t get off we will fly. So far there hasn’t been any word about us flying so I doubt if we will.

I have been out on this old wreck the entire day, they have doubled the plane watch to keep the Japs from messing up any of them so we have to spend about all of our time on them, either flying or rocking around keeping good and seasick.

Tomorrow is payday, it doesn’t mean much here. I have 199 coming if I am on the ship I may draw it and send home a couple hundred. If it isn’t too much trouble I would like you to tell me again how much I have on my account, I know that it has been sent a dozen times. I want to save 1000 dollars this year (700 + 300 war bonds).  That won’t be too bad considering I bought a motorcycle. That’s going to be a great day when I attempt to ride that thing again.

Are the prices of used cars going down any now? How about sending me an ad once in a while if you can. Be sure if you do to send one with prices listed.

This is getting to be a dead place here, nothing is going on that is worth while. The marines on shore were shooting some this morning, but we couldn’t see well with the glasses because of a heavy fog. A dead Jap floated by this afternoon almost bumping into the plane and that about winds up the news for the day.

I have read about a dozen books since being out here because there is nothing else to do outside of pumping water out of these leaky old planes. I would like to see each and every one of them sink.

We have been secured from flying tonight which means we will have to fly tomorrow. I have to stay on the plane tonight (sit up on the wing with a tommy gun) and also until 10 tomorrow. We have 24 hour watches and that’s a pain.

I may send my Jap canteen and helmet home if I can find something to mail them in. I took them from a dead Jap on Saipan. You should have seen that place, we went back in the hills and everything was laying around. We found boxes and boxes of unopened ammunition, rations, canteens, helmets just as they had been left. I found a part of a rifle but we can’t keep stuff like that so I left it there. Good Japs were everyplace, what was left of them for they had been dead about a year. We found a Jap hospital and it was full of junk and old Japs. I had some Jap medical records but decided to throw them away. I could never learn to read them after being such a flop in French. I had a set of pretty plates but they got broken in moving and also a set of glasses with scenes from Japan painted on them.

Some Japs were still running loose there and believe it or not but they caught some in our chow lines so had to issue passes every day. Most of the natives on the islands work for the U.S. and the Japs look a lot like them.

We slept in tents there and one night a sentry was knifed about a half block from our tent. The next night we changed locations, no more of that for us.

I got a big laugh this afternoon a big string of landing barges went by full of Army fellows. They were all weighted down with guns and so forth just as if they were going in on an invasion. That’s about the same as the British, they have a few ships here and more than likely will want all the credit and their ships came here after we did.

I might as well close nothing to write about. Will write tomorrow if anything turns up.