Letter from James Wright to his parents, September 8, 1945 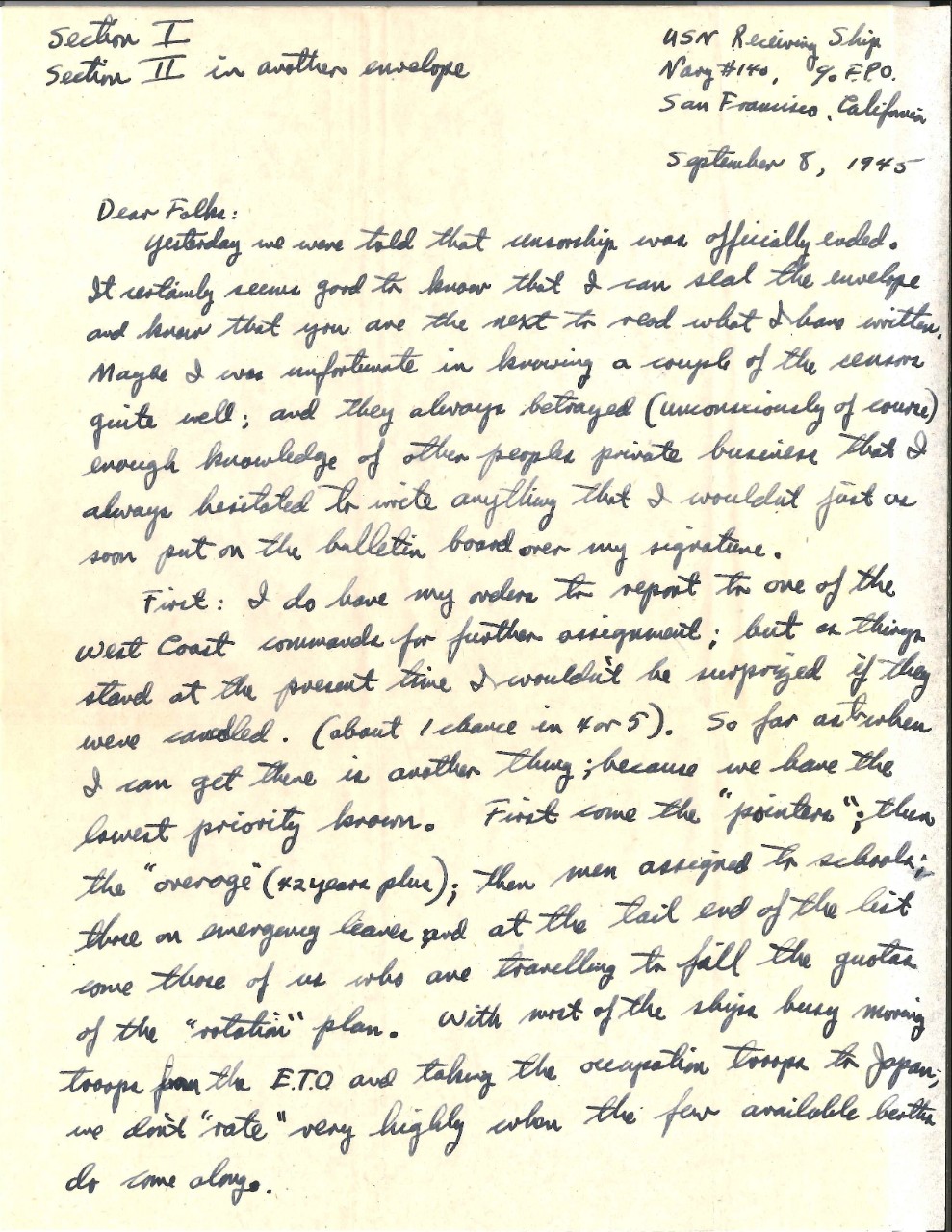 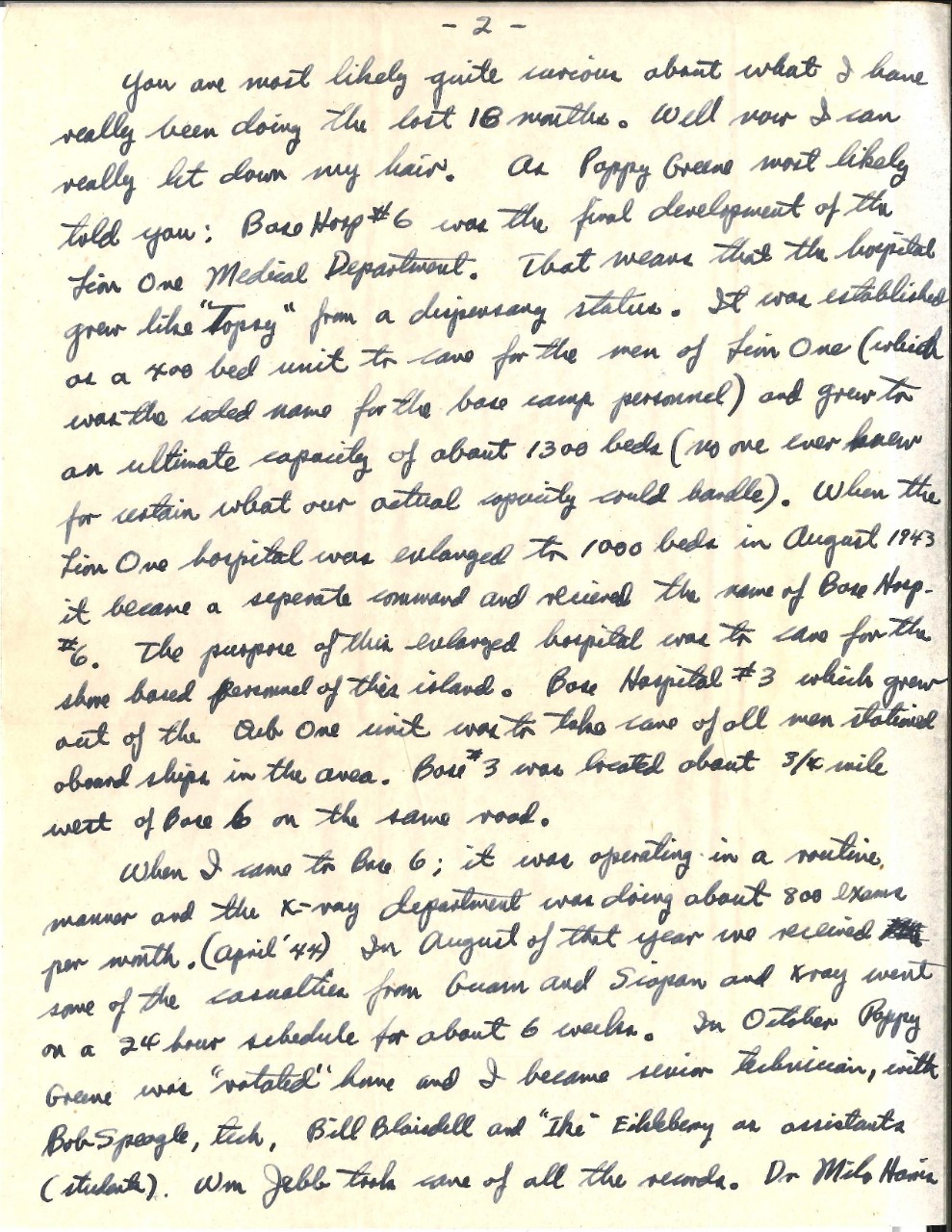 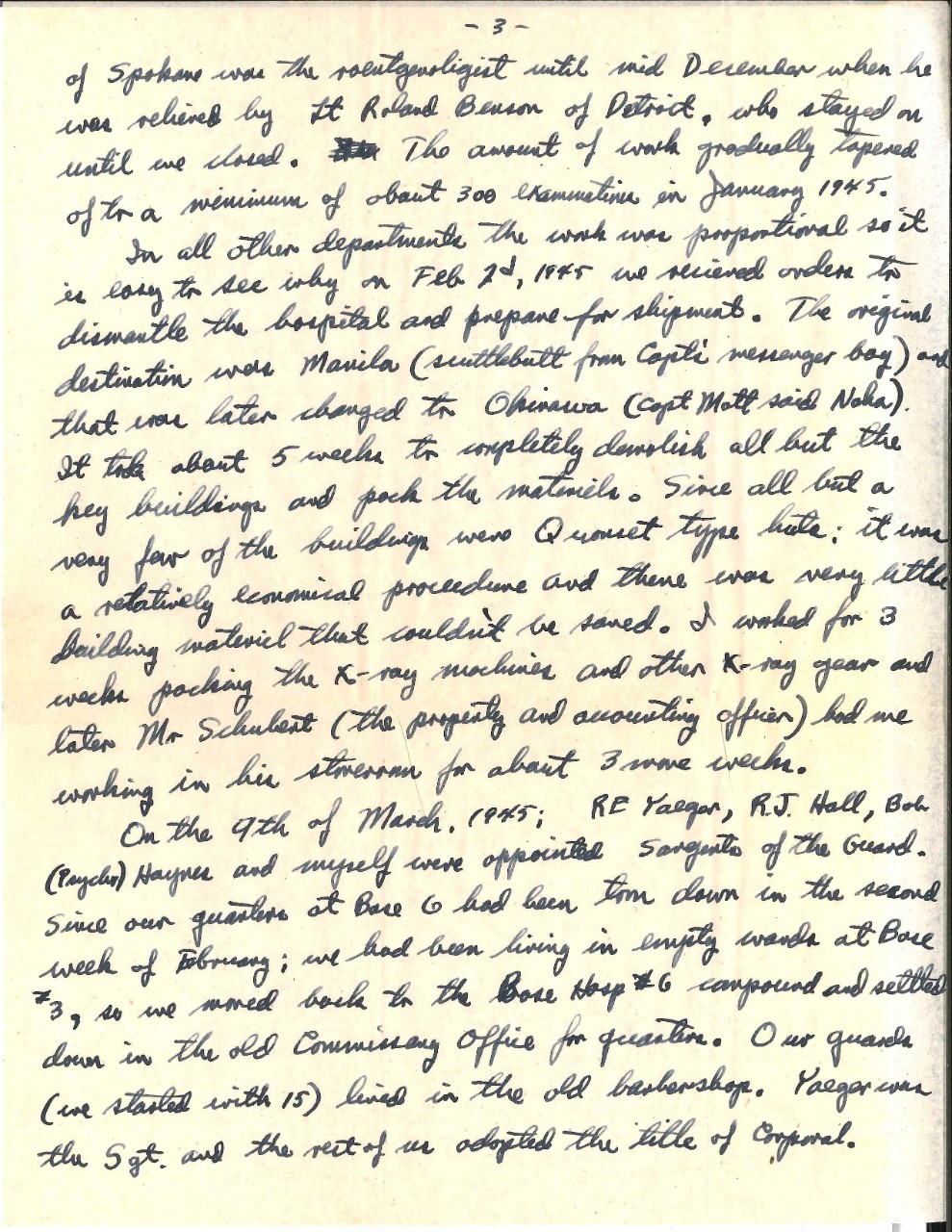 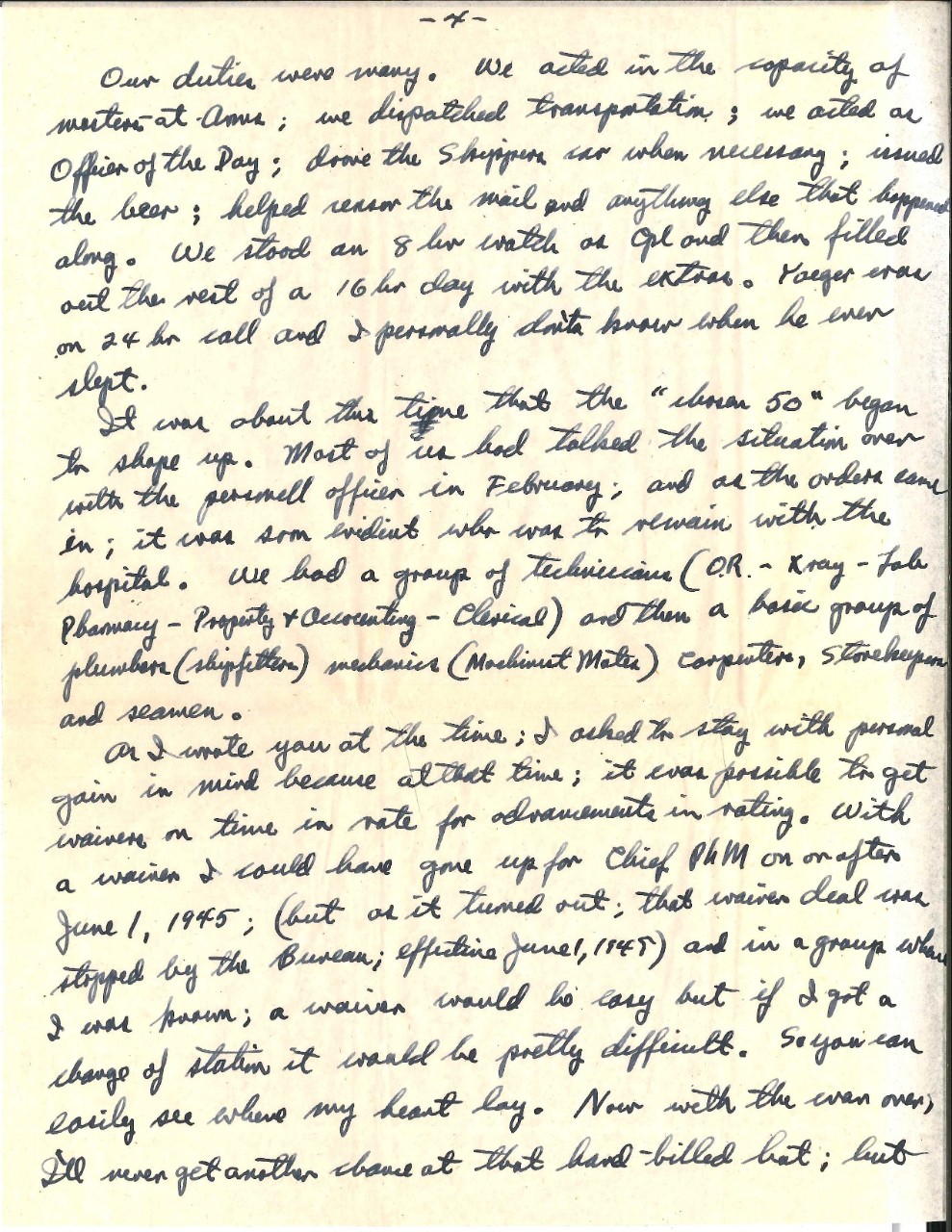 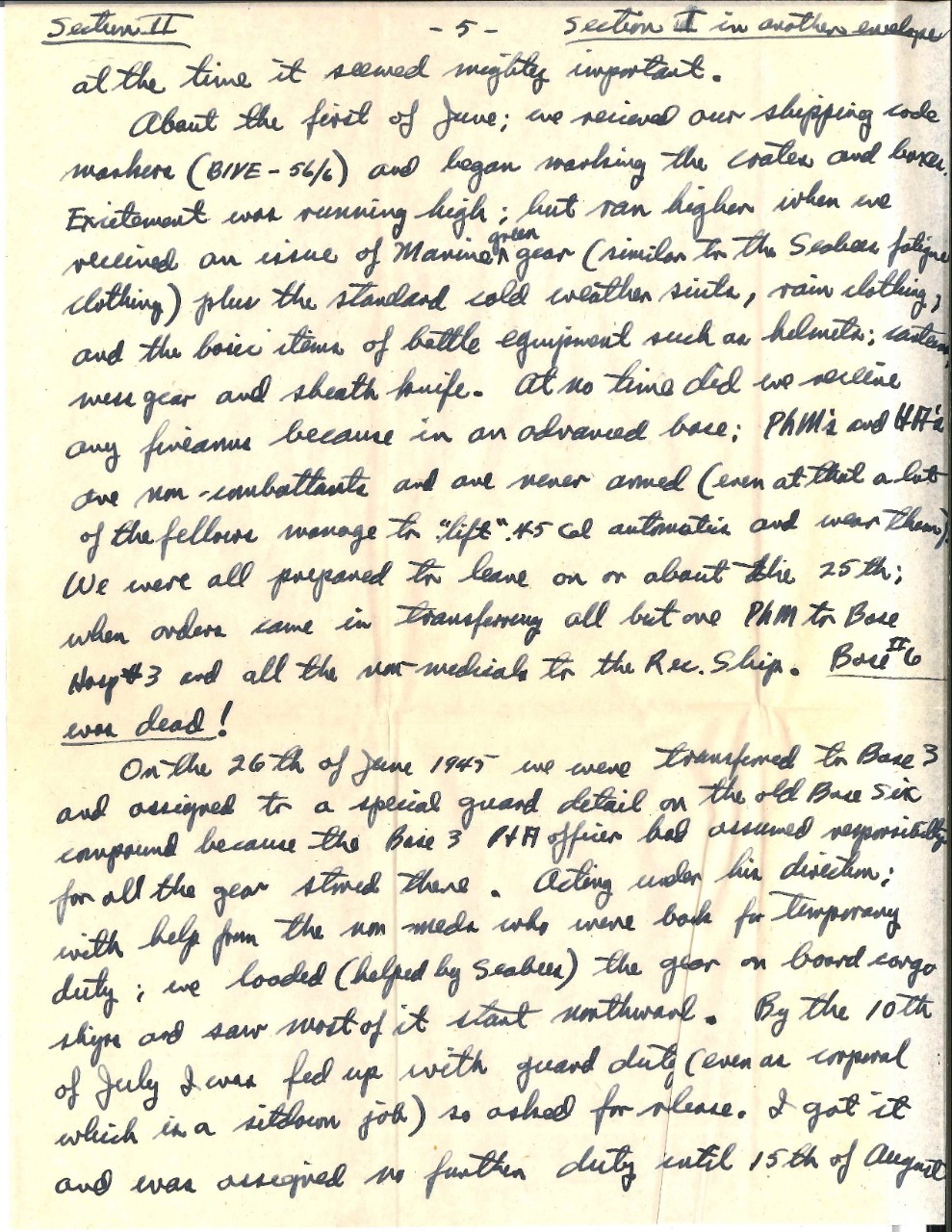 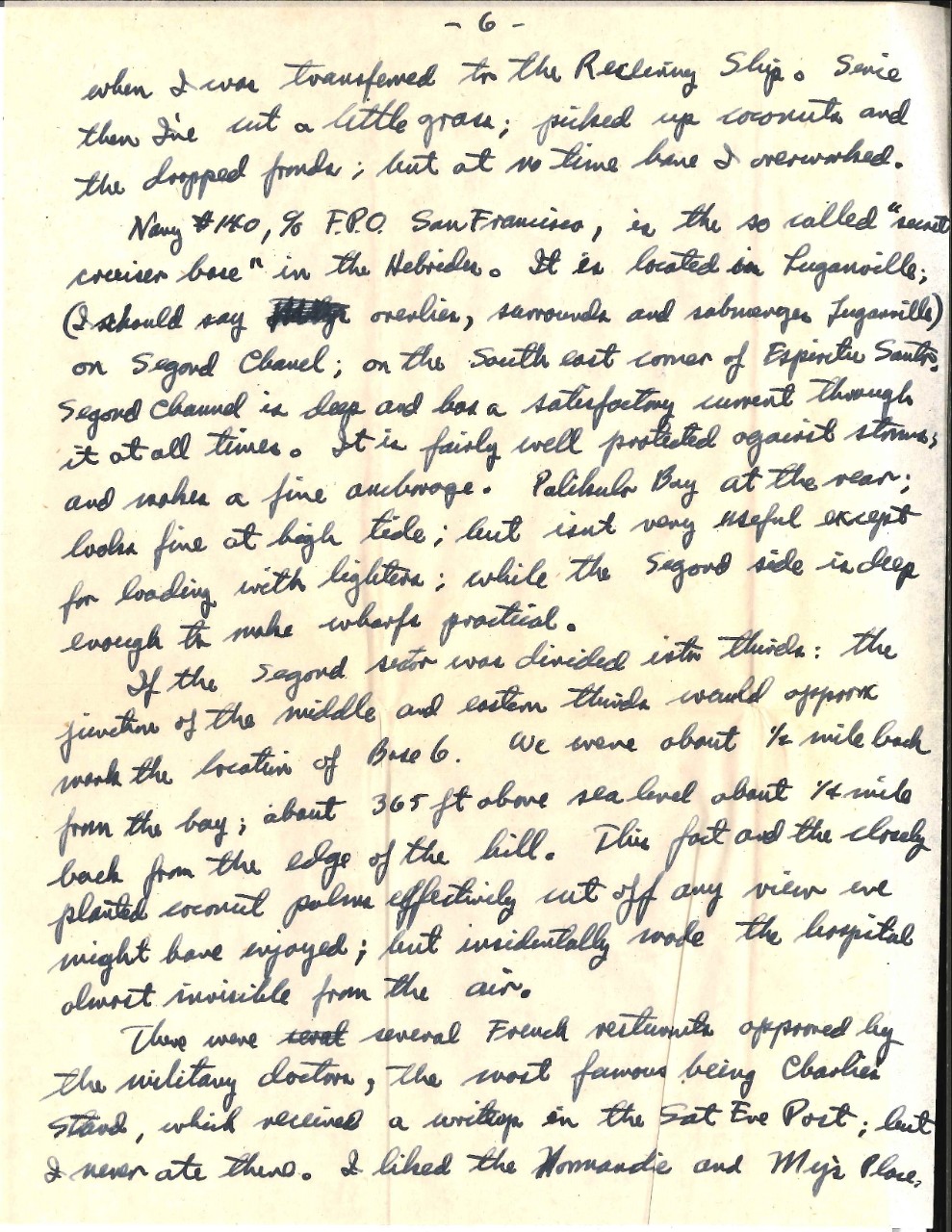 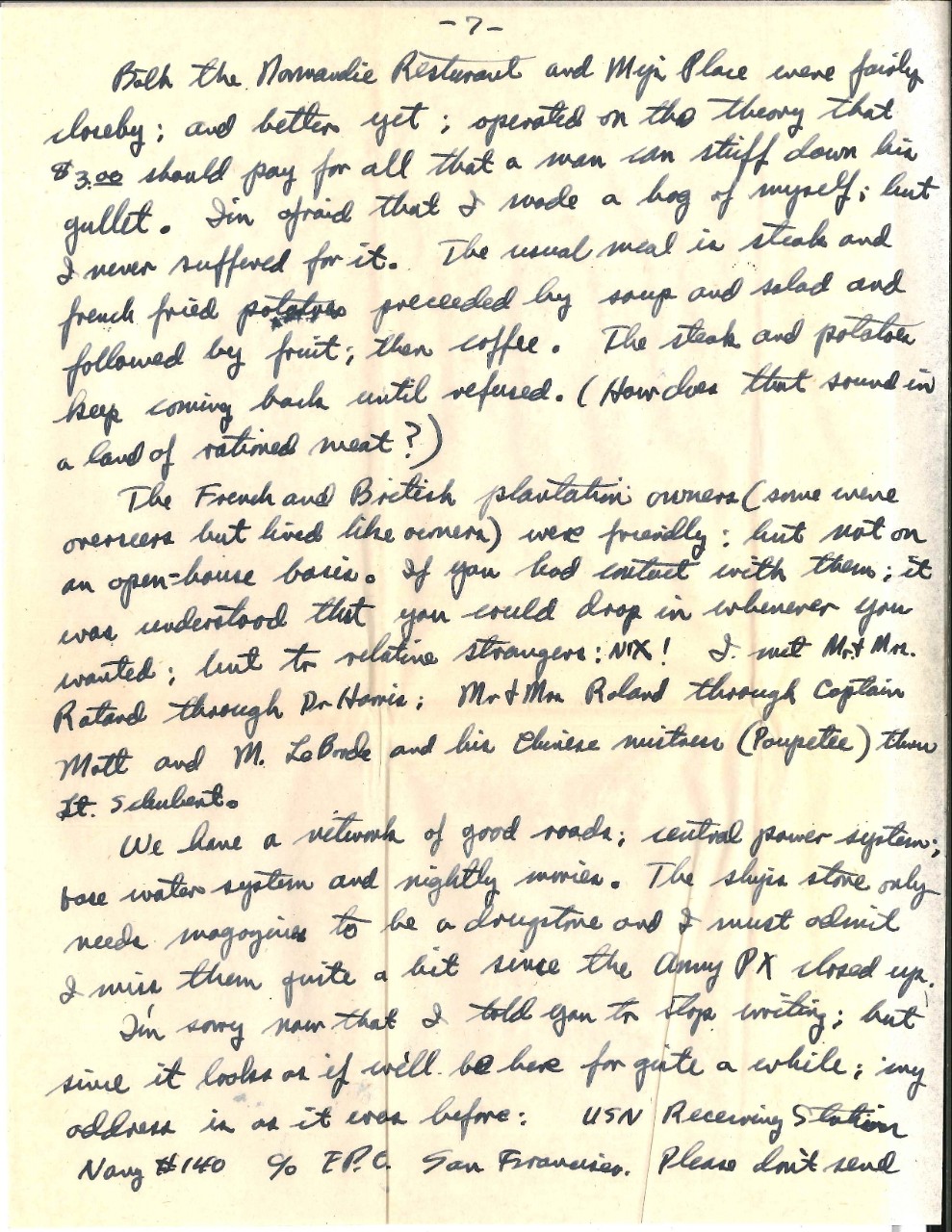 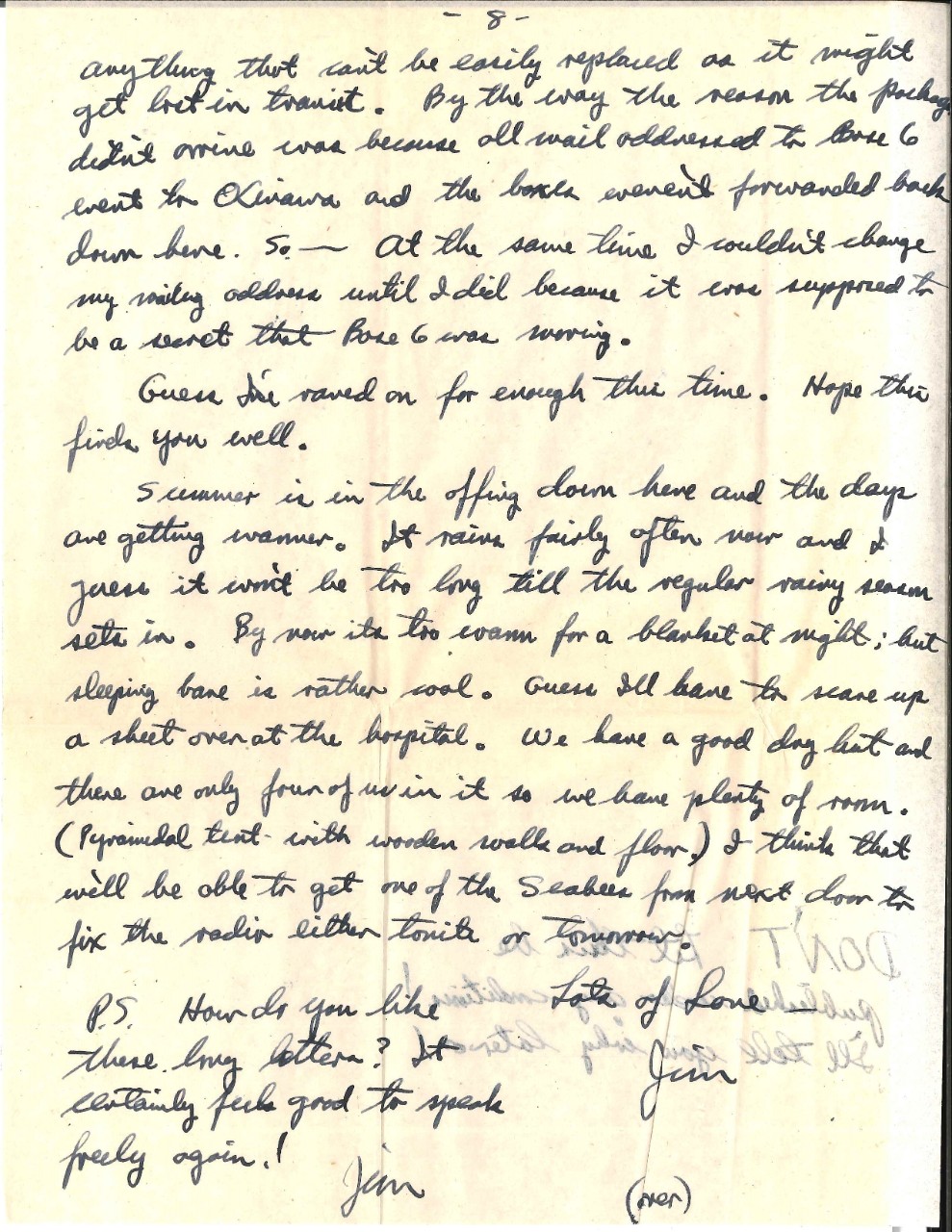 Section II in another envelope

Yesterday we were told that censorship was officially ended.  It certainly seems good to know that I can seal the envelope and know that you are the next to read what I have written.  Maybe I was unfortunate in knowing a couple of the censors quite well; and they always betrayed (unconsciously of course) enough knowledge of other people’s private business that I always hesitated to write anything that I wouldn’t just as soon put on the bulletin board over my signature.

First:  I do have my orders to report to one of the West Coast commands for further assignment; but as things stand at the present time, I wouldn’t be surprised if they were canceled (about 1 chance in 4 or 5).  So far as to when I can get there is another thing; because we have the lowest priority known.  First come the “pointers”; then the “overage” (42 years plus); then men assigned to schools; those on emergency leaves and at the tail end of the list come those of us who are travelling to fill the quotas of the “rotation” plan.  With most of the ships busy moving troops from the E.T.O. and taking the occupation troops to Japan; we don’t “rate” very highly when the few available berths do come along.

You are most likely quite curious about what I have really been doing the last 18 months.  Well now I can really let down my hair.  As Pappy Greene most likely told you; Base Hosp. #6 was the final development of the Lion One Medical Department.  That means that the hospital grew like “Topsy” from a dispensary status.  It was established as a 400 bed unit to care for the men of Lion One (which was the coded name for the base camp personnel) and grew to an ultimate capacity of about 1300 beds (no one ever knew for certain what our actual capacity could handle).  When the Lion One hospital was enlarged to 1000 beds in August 1943 it became a separate command and received the name of Base Hosp. #6.  The purpose of the enlarged hospital was to care for the shore based personnel of this island.  Base Hospital #3 which grew out of the Cub One unit was to take care of all men stationed aboard ships in the area.  Base #3 was located about ¾ mile west of Base 6 on the same road.

When I came to Base 6; it was operating in a routine manner and the X-ray department was doing about 800 exams per month (April ’44).  In August of that year we received some of the casualties from Guam and Saipan and X-ray went on a 24 hour schedule for about 6 weeks.  In October Pappy Greene was “rotated” home and I became senior technician, with Bob Speagle, tech, Bill Blaisdell and “Ike” Eikleberry as assistants (students), Wm Jebb took care of all the records.  Dr. Milo Harris of Spokane was the roentgenologist until mid December when he was relieved by Lt Roland Benson of Detroit, who stayed on until we closed.  The amount of work gradually tapered off to a minimum of about 300 examinations in January 1945.

In all other departments the work was proportional so it is easy to see why on Feb 2d, 1945 we received orders to dismantle the hospital and prepare for shipment.  The original destination was Manila (scuttlebutt from Capt’s messenger boy) and that was later changed to Okinawa (Capt Mott said Naha).  It took about 5 weeks to completely demolish all but the key buildings and pack the materials.  Since all but a very few of the buildings were Quonset type huts; it was a relatively economical procedure and there was very little building materiel that couldn’t be saved.  I worked for 3 weeks packing the x-ray machines and other x-ray gear and later Mr. Schubert (the property and accounting officer) had me working in his storeroom for about 3 more weeks.

On the 9th of March, 1945; R E Yaeger, R. J. Hall, Bob (Psycho) Haynes and myself were appointed sergeants of the Guard.  Since our quarters at Base 6 had been torn down in the second week of February; we had been living in empty wards at Base #3, so we moved back to the Base Hosp. #6 compound and settled down in the old Commissary Office for quarters.  Our guards (we started with 15) lived in the old barbershop.  Yaeger was the Sgt. and the rest of us adopted the title of Corporal.  Our duties were many.  We acted in the capacity of masters-at-Arms; we dispatched transportation; we acted as Officer of the Day; drove the Skippers car when necessary; issued the beer; helped censor the mail and anything else that happened along.  We stood an 8 hr watch as Cpl and then filled out the rest of a 16 hr day with the extras.  Yaeger was on 24 hr call and I personally don’t know when he ever slept.

It was about the time that the “chosen 50” began to shape up.  Most of us had talked the situation over with the personnel officer in February; and as the orders came in; it was soon evident who was to remain with the hospital.  We had a group of technicians (O.R. – Xray-Lab – Pharmacy – Property & Accounting – Clerical) and then a basic group of plumbers (shipfitters) mechanics (Machinist Mates), Carpenters, Storekeepers and seamen.

As I wrote you at the time; I asked to stay with personal gain in mind because at that time; it was possible to get waivers on time in rate for advancements in rating.  With a waiver I could have gone up for Chief PhM on or after June 1, 1945; (but as it turned out; that waiver deal was stopped by the Bureau; effective June 1, 1945) and in a group where I was known; a waiver would be easy but if I get a change of station it would be pretty difficult.  So you can easily see where my heart lay.  Now with the war over, I’ll never get another chance at that hard-billed hat; but

at the time it seemed mighty important.

About the first of June; we received our shipping code markers (BIVE – 56/6) and began marking the crates and boxes.  Excitement was running high; but ran higher when we received an issue of Marine green gear (similar to the Seabees fatigue clothing) plus the standard cold weather suits, rain clothing, and the basic items of battle equipment such as helmets; canteens, mess gear and sheath knife.  At no time did we receive any firearms because in an advanced base; PhM’s and HA’s are non-combatants and are never armed (even at that a lot of the fellows manage to “lift” 45 Cal. Automatics and wear them).  We were all prepared to leave on or about the 25th, when orders came in transferring all but one PhM to Base Hosp. #3 and all the non-medicals to the Rec. Ship.  Base #6 was dead!

On the 26th of June 1945 we were transferred to Base 3 and assigned to a special guard detail on the Base Six compound because the Base 3 P&A officer had assumed responsibility for all the gear stored there.  Acting under his direction; with help from the non-meds who were back for temporary duty; we loaded (helped by Seabees) the gear on board cargo ships and saw most of it start northward.  By the 10th of July I was fed up with guard duty (even as corporal which is a sitdown job) so asked for release.  I got it and was assigned no further duty until 15th of August when I was transferred to the Receiving Ship.  Since then I’ve cut a little grass, picked up coconuts and the dropped fronds; but at no time have I overworked.

Navy #140, c/o F.P.O.  San Francisco, is the so-called “secret cruiser base” in the Hebrides.  It is located in Luganville; (I should say overlies, surrounds and submerges on Luganville) on Segond Channel; on the Southeast corner of Espiritu Santo.  Segond Channel is deep and has a satisfactory current through it at all times.  It is fairly well protected against storms; and makes a fine anchorage.  Palikulo Bay at the rear; looks fine at high tide; but isn’t very useful except for loading with lighters; while the Segond side is deep enough to make wharfs practical.

If the Segond sector was divided into thirds; the junction of the middle and eastern thirds would approx mark the location of Base 6.  We were about ½ mile back from the bay; about 365 feet above sea level about ¼ mile back from the edge of the hill.  This fact and the closely planted coconut palms effectively cut off any view we might have enjoyed; but incidentally made the hospital almost invisible from the air.

There were several French restaurants approved by the military doctors, the most famous being Charlie’s Stand; which received a writeup in the Sat Eve Post; but I never ate there.  I liked the Normandie and My’s Place were fairly close by; and better yet; operated on the theory that $3.00 should pay for all that a man can stuff down his gullet.  I’m afraid that I made a hog of myself, but I never suffered for it.  The usual meal is steak and french fried potatoes preceeded by soup and salad and followed by fruit: then coffee.  The steak and potatoes keep coming back until refused.  (How does that sound in a land of rationed meat?)

The French and British plantation owners (some were overseers that lived like owners) were friendly; but not on an open-house basis.  If you had contact with them; it was understood that you could drop in whenever you wanted; but to relative strangers: Nix!  I met Mr. and Mrs. Ratard through Dr. Harris;  Mr. & Mrs. Roland through Captain Mott and M. LeBorde and his Chinese mistress (Poupetee) thru Lt. Schubert.

We have a network of good roads; central power system; base water system and nightly movies.  The ship’s store only needs magazines to be a drugstore and I must admit I miss them quite a bit since the Army PX closed up.

I’m sorry now that I told you to stop writing; but since it looks as if we’ll be here for quite awhile; my address is as it was before:  USN Receiving Station Navy #140 c/o F.P.O. San Francisco.  Please don’t send anything that can’t be easily replaced as it might get lost in transit.  By the way the reason the package didn’t arrive was because all mail addressed to Base 6 went to Okinawa and the boxes weren’t forwarded back down here.  So --- At the same time I couldn’t change my mailing address until I did because it was supposed to be a secret that Base 6 was moving.

Guess I’ve raved on enough for this time.  Hope this finds you well.

Summer is in the offing down here and the days are getting warmer.  It rains fairly often now and I guess it won’t be too long till the regular rainy season sets in.  By now it’s too warm for a blanket at night; but sleeping bare is rather cool.  Guess I’ll have to scare up a sheet over at the hospital.  We have a good dry hut and there are only four of us in it so we have plenty of room (Pyramidal tent – with wooden walls and floor) I think that we’ll be able to get one of the Seabees from next door to fix the radio either tonite or tomorrow.

P.S. How do you like these long letters?  It certainly feels good to speak freely again!  - Jim