Letter from James Wright to his parents, September 17, 1945 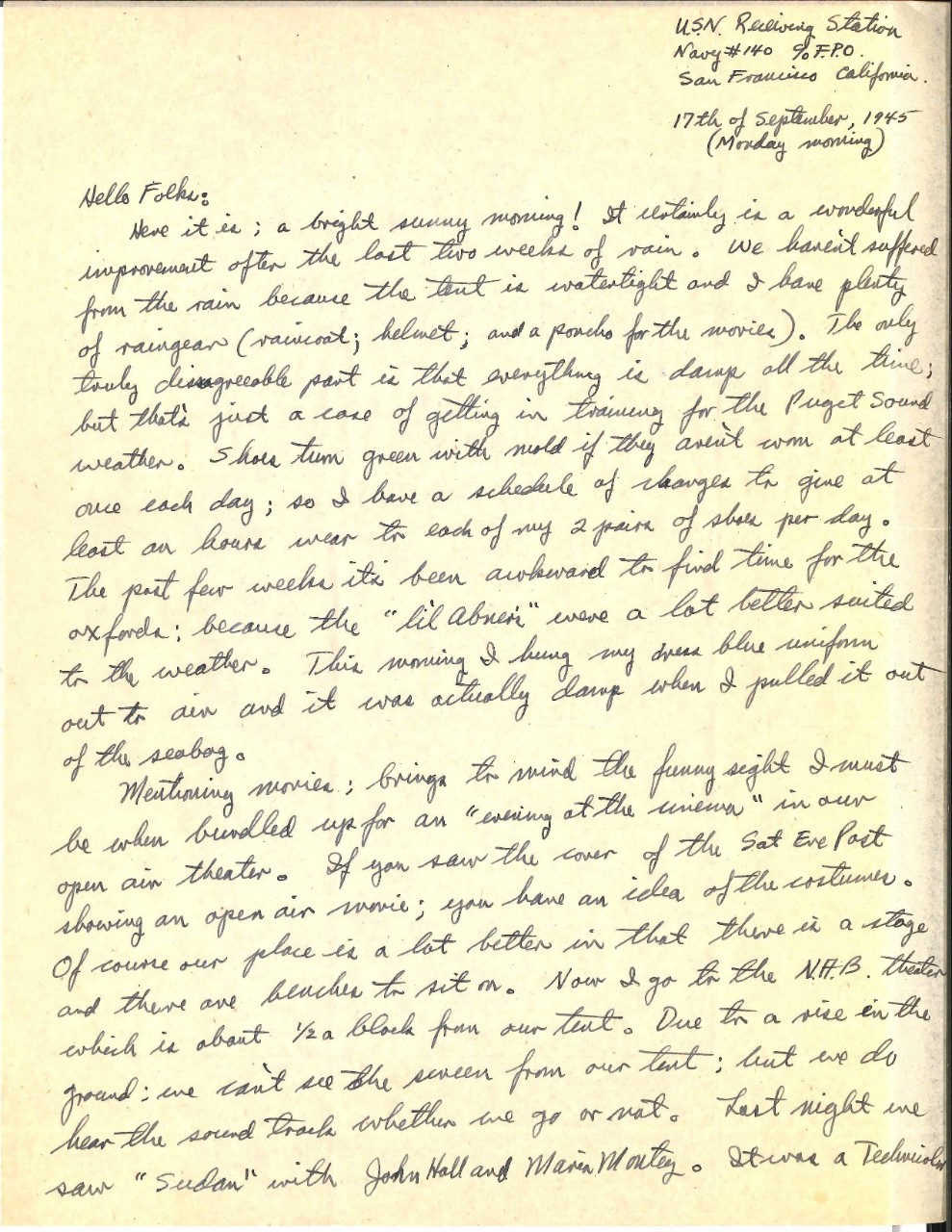 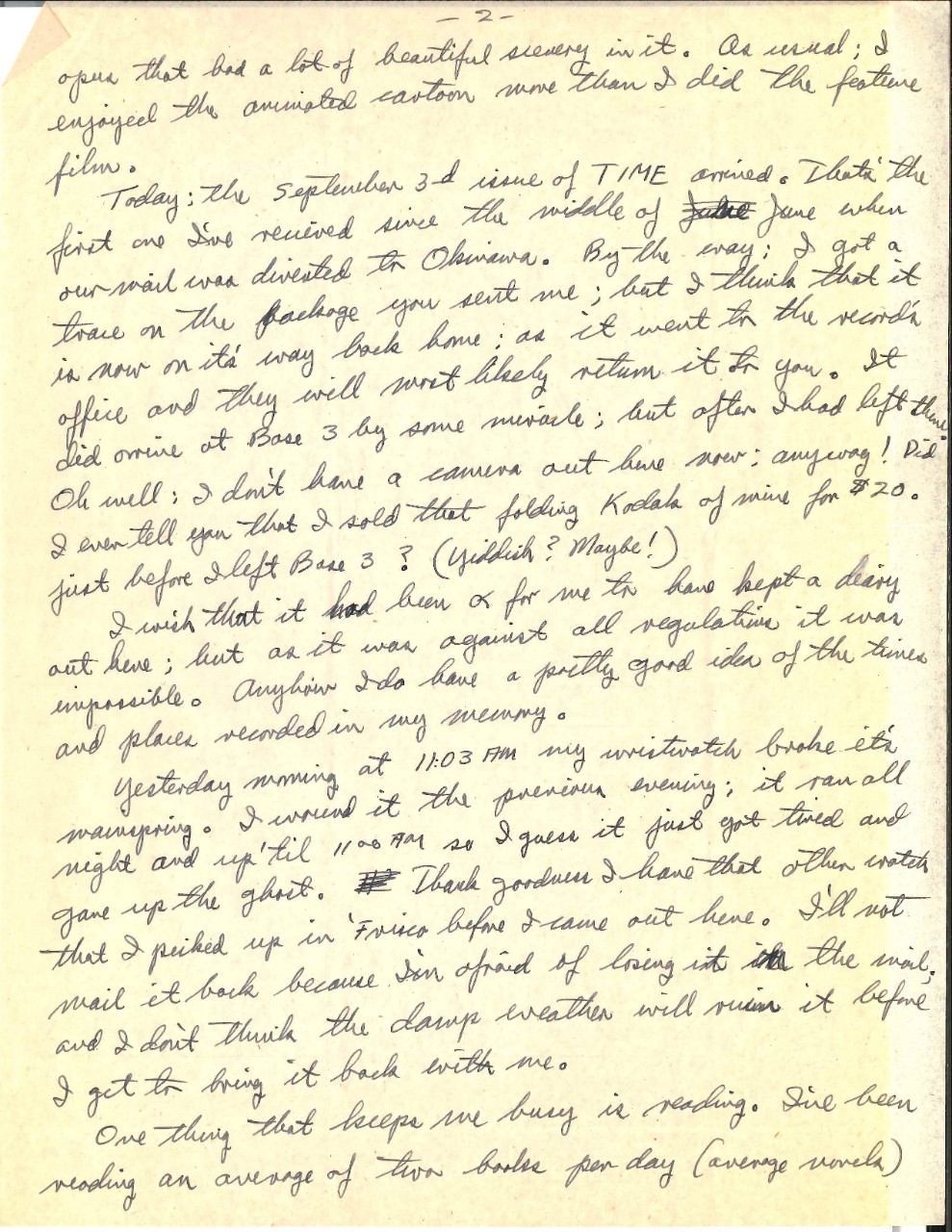 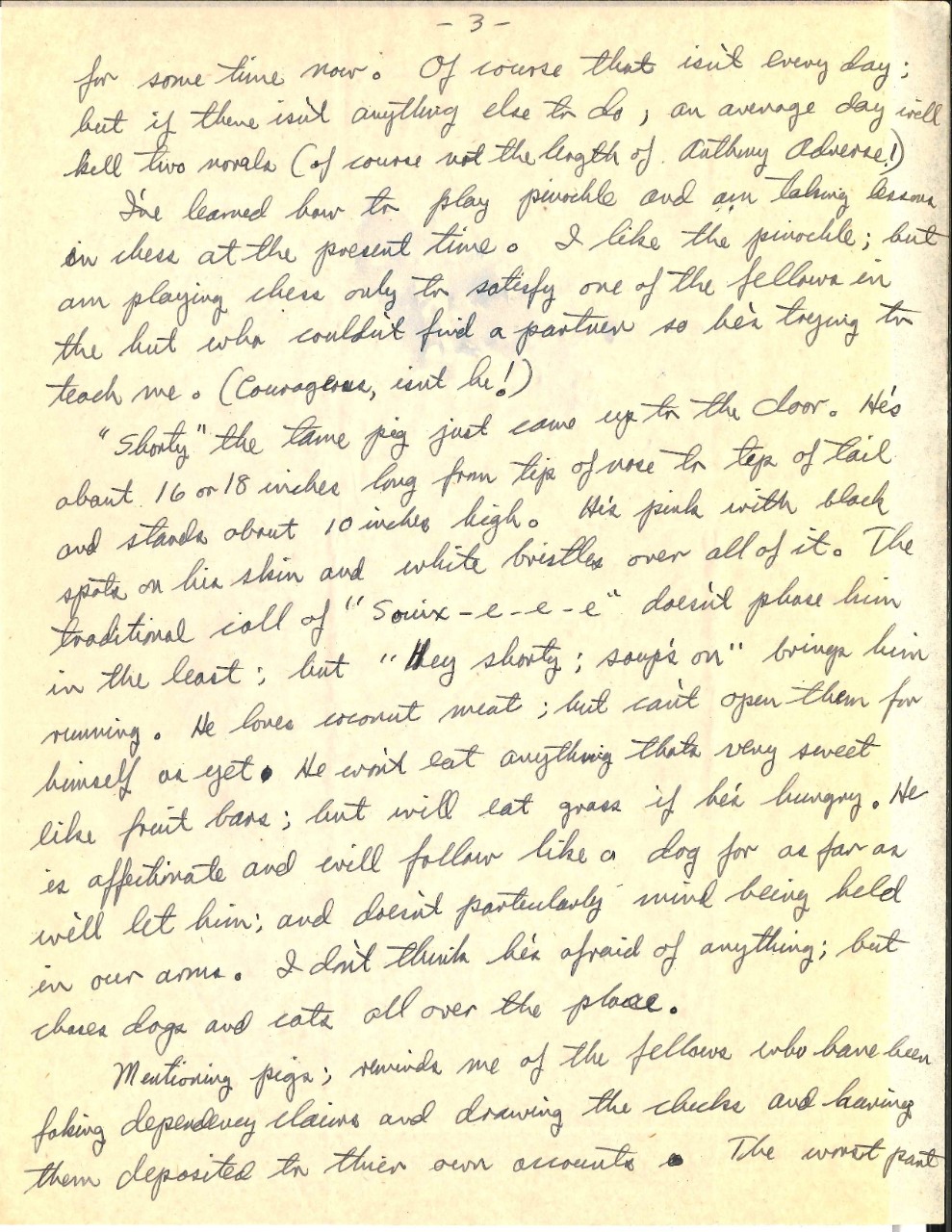 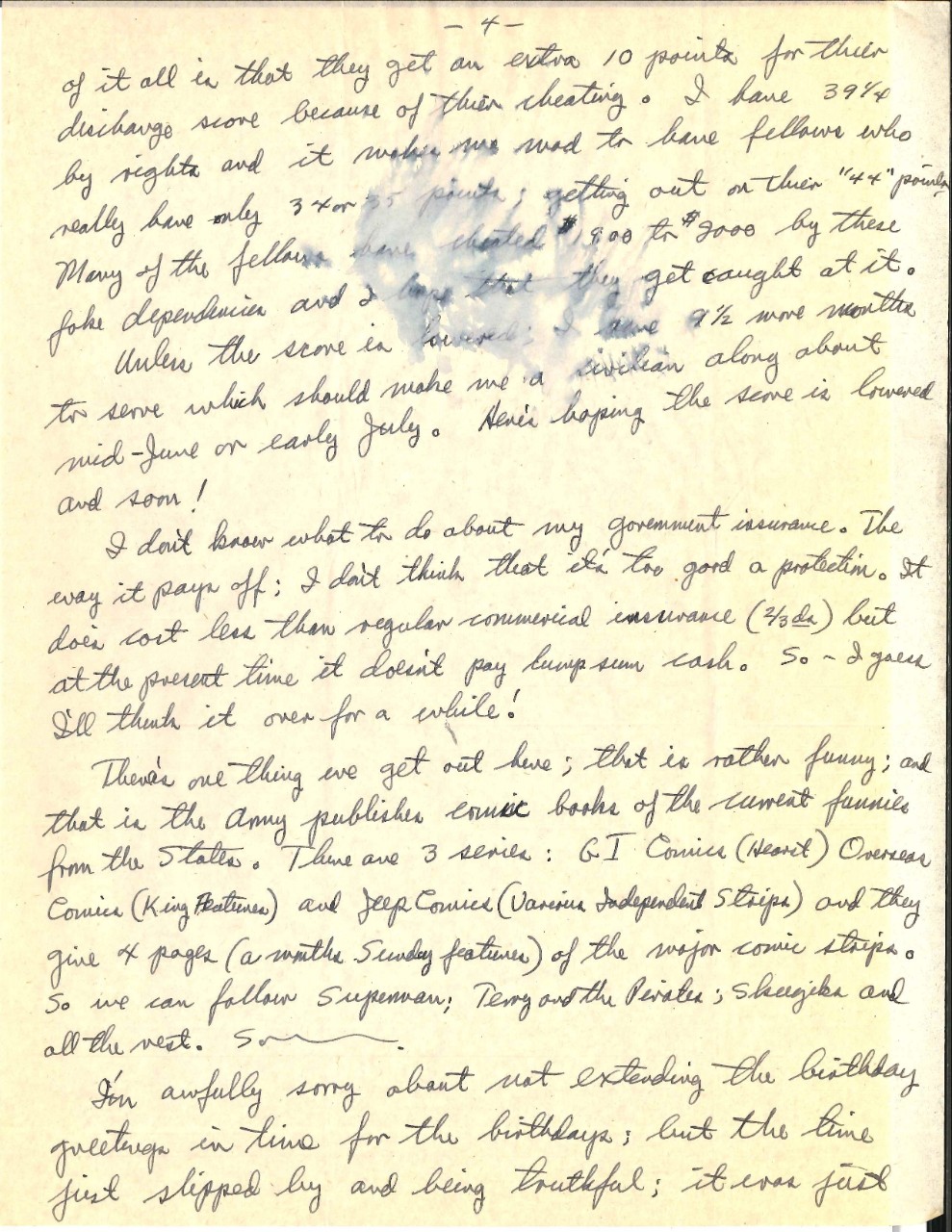 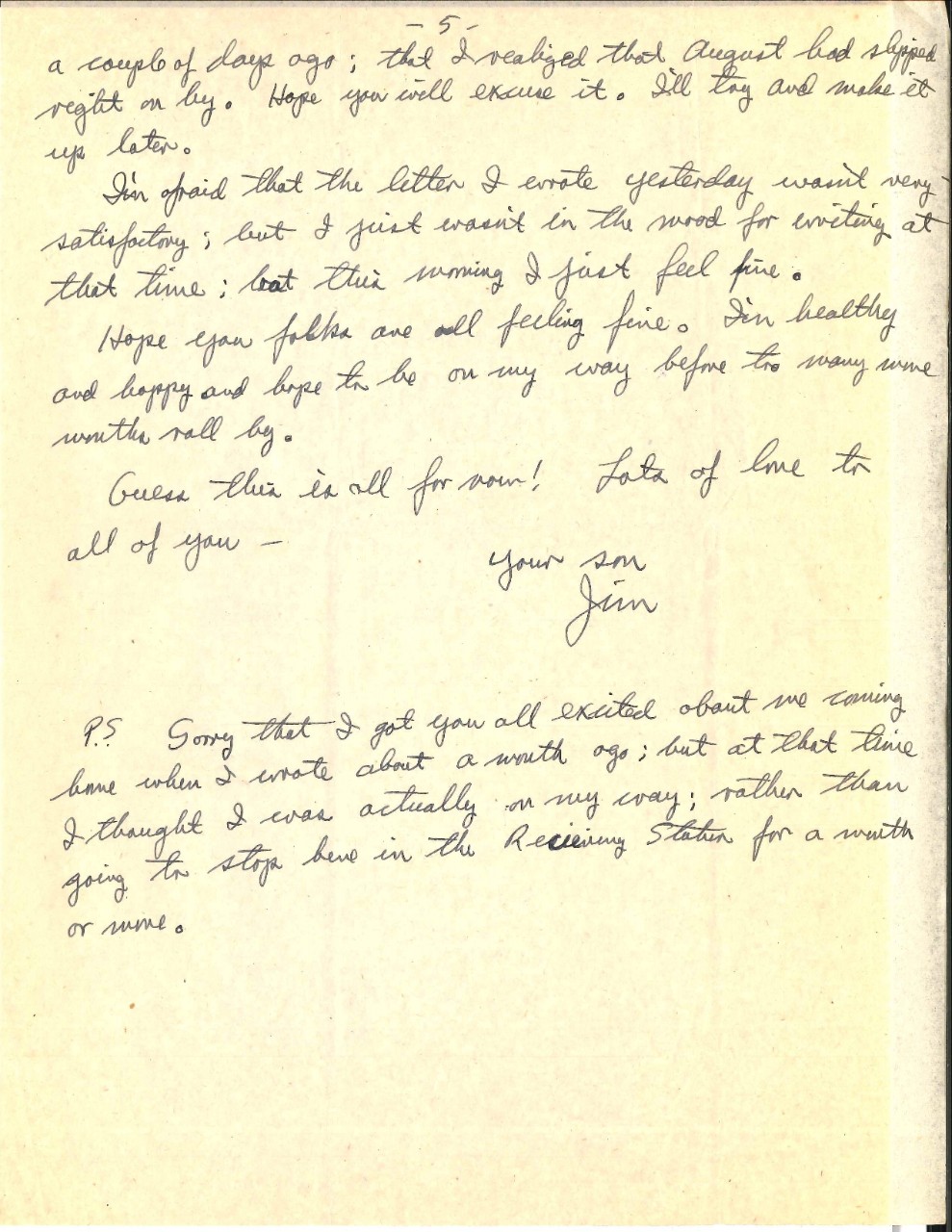 Here it is: a bright sunny morning! It certainly is a wonderful improvement after the last two weeks of rain. We haven’t suffered from the rain because the tent is watertight and I have plenty of raingear (raincoat; helmet; and a poncho for the movies). The only truly disagreeable part is that everything is damp all the time; but that’s just a case of getting in training for the Puget Sound weather. Shoes turn green with mold if they aren’t worn at least once each day; so I have a schedule of changes to give at least an hour wear to each of my 2 pairs of shoes per day. The past few weeks it’s been awkward to find time for the oxfords; because the “li’l Abers” were a lot better suited to the weather. This morning I hung my dress blue uniform out to air and it was actually damp when I pulled it out of the seabag.

Mentioning movies; brings to mind the funny sight I must be when bundled up for an “evening at the cinema” in our open air theater. If you saw the cover of the Sat Eve Post showing an open air movie; you have an idea of the costumes. Of course our place is a lot better in that there is a stage and there are benches to sit on. Now I go to the N.A.B. theater which is about ½ a block from our tent. Due to a rise in the ground, we can’t see the screen from our tent; but we do hear the sound track whether we go or not. Last night we saw “Sudan” with John Hall and Maria Montez. It was a Technicolor opus that had a lot of beautiful scenery in it. As usual, I enjoyed the animated cartoon more than I did the feature film.

Today, the September 3rd issue of TIME arrived. That’s the first one I’ve received since the middle of June when our mail was directed to Okinawa. By the way; I got a trace on the package you sent me; but I think that it is now on it’s [sic] way back home; as it went to the record’s office and they will most likely return it to you. It did arrive at Base 3 by some miracle; but after I had left there. Oh well; I don’t have a camera out here now; anyway! Did I ever tell you that I sold that folding Kodak of mine for $20 just before I left Base 3? (Yiddish? Maybe!)

Yesterday morning at 11:03 AM my wristwatch broke it’s [sic] mainspring. I wound it the previous evening; it ran all night and up ‘til 1100 AM so I guess it just got tired and gave up the ghost. Thank goodness I have that other watch that I picked up in ‘Frisco before I came out here. I’ll not mail it back because I’m afraid of losing it in the mail, and I don’t think the damp weather will ruin it before I get to bring it back with me.

One thing that keeps me busy is reading. I’ve been reading an average of two books per day (average novels) for some time now. Of course that isn’t every day; but if there isn’t anything else to do, an average day will kill two novels (of course not the length of Anthony Adverse!)

I’ve learned how to play pinochle and am taking lessons in chess at the present time. I like the pinochle; but am playing chess only to satisfy one of the fellows in the hut who couldn’t find a partner so he’s trying to teach me. (Courageous, isn’t he!)

“Shorty” the tame pig just came up to the door. He’s about 16 or 18 inches long from tip of nose to tip of tail and stands about 10 inches high. He’s pink with black spots on his skin and white bristles over all of it. The traditional call of “Souix-e-e-e” doesn’t phase him in the least; but “Hey shorty, soup’s on” brings him running. He loves coconut meat; but can’t open them for himself as yet. He won’t eat anything that’s very sweet like fruit bars; but will eat grass if he’s hungry. He is affectionate and will follow like a dog for as far as will let him; and doesn’t particularly mind being held in our arms. I don’t think he’s afraid of anything; but chases dogs and cats all over the place.

Mentioning pigs; reminds me of the fellows who have been faking dependency claims and drawing the checks and having them deposited to their own accounts. The worst part of it all is that they get an extra 10 points for their discharge score because of their cheating. I have 39 ¼ by rights and it makes me mad to have fellows who really have only 34 or 35 points; getting out on their “44” points. Many of the fellows have cheated $1900 to $2000 by these false dependencies and I hope that they get caught at it.

I don’t know what to do about my government insurance. The way it pays off, I don’t think that it’s too good a protection. It does cost less than regular commercial insurance (2/3ds) but at the present time it doesn’t pay lump sum cash. So – I guess I’ll think it over for a while!

There’s one thing we get out here; that is rather funny; and that is the Army publishes comic books of the current funnies from the States. There are 3 series: GI Comics (Hearst) Overseas Comics (King features) and Jeep Comics (Various Independent Strips) and they give 4 pages (a months [sic] Sunday features) of the major comic strips. So we can follow Superman; Terry and the Pirates; [?] and all the rest. So –

I’m awfully sorry about not extending the birthday greetings in time for the birthdays; but the time just slipped by and being truthful; it was just a couple of days ago; that I realized that August had slipped right on by. Hope you will excuse it. I’ll try and make it up later.

I’m afraid the letter I wrote yesterday wasn’t very satisfactory; but I just wasn’t in the mood for writing at that time; but this morning I just feel fine.

Hope you folks are all feeling fine. I’m healthy and happy and hope to be on my way before too many more months roll by.

Guess this is all for now! Lots of love to all of you –

P.S. Sorry that I got you all excited about me coming home when I wrote about a month ago; but at that time I thought I was actually on my way; rather than going to stop here in the Receiving Station for a month or more.