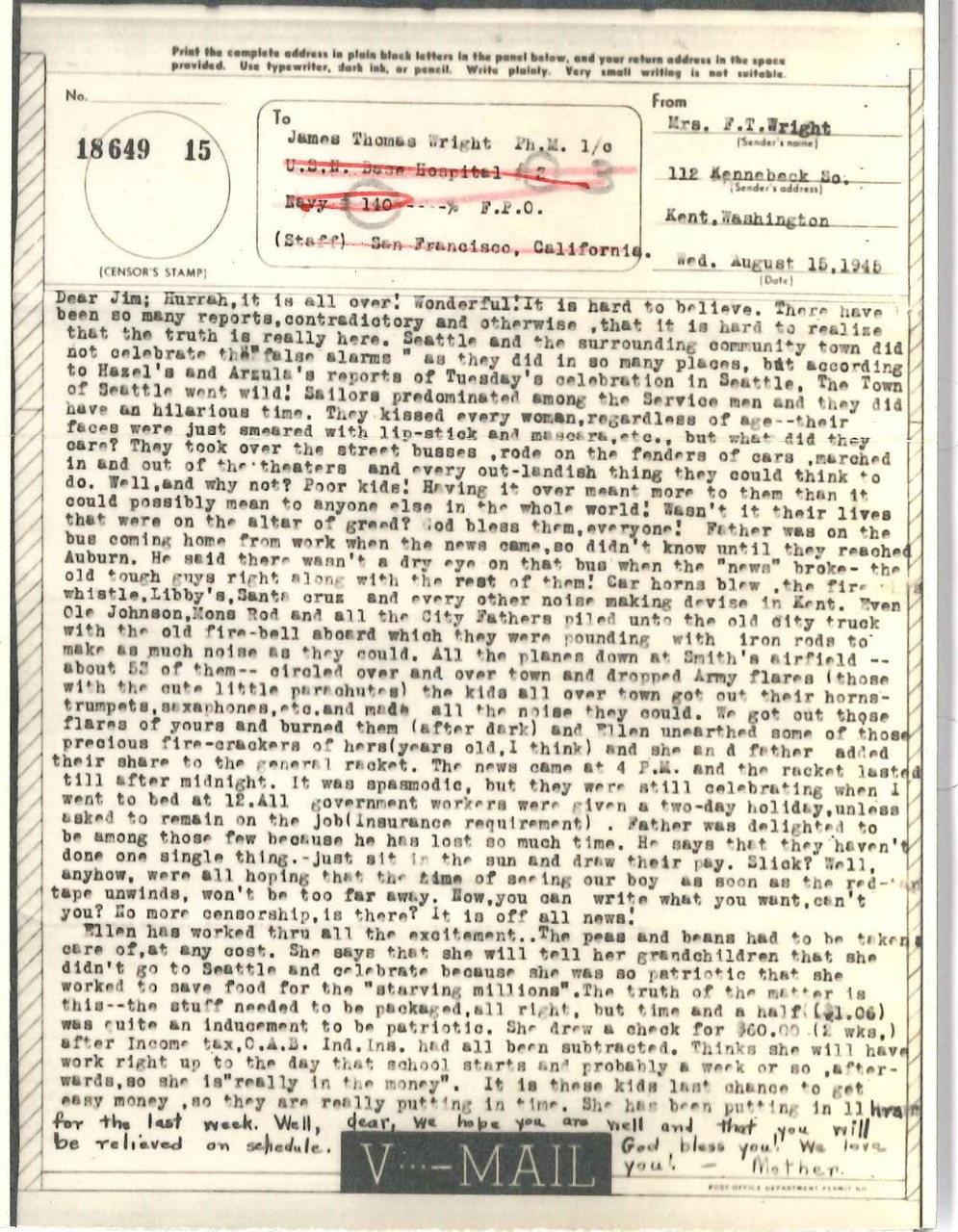 Dear Jim: Hurrah, it is all over! Wonderful! It is hard to believe. There have been so many reports, contradictory and otherwise, that it is hard to realize that the truth is really here. Seattle and the surrounding community town did not celebrate the “false alarms” as they did in so many places, but according to Hazel’s and Argula’s reports of Tuesday’s celebration in Seattle, The Town of Seattle went wild! Sailors predominated among the Service men and they did have an hilarious time. They kissed every woman, regardless of age – their faces were just smeared with lip-stick and mascara, etc., but what did they care? They took over the street busses, rode on the fenders of cars, marched in and out of the theaters and every out-landish thing they could think to do. Well, and why not? Poor kids! Having it over meant more to them than it could possibly mean to anyone else in the whole world! Wasn’t it their lives that were on the altar of greed? God bless them, everyone! Father was on the bus coming home from work when the news came, so didn’t know until they reached Auburn. He said there wasn’t a dry eye on that bus when the “news” broke – the old tough guys right along with the rest of them! Car horns blew, the fire whistle, Libby’s, Santa cruz and every other noise making devise in Kent. Even Old Johnson, Mons Rod and all the City Fathers piled unto the old city truck with the old fire-bell aboard which they were pounding with iron rods to make as much noise as they could. All the planes down at Smith’s airfield – about 53 of them – circled over and over town and dropped Army flares (those with the cute little parachutes) the kids all over town got out their horns – trumpets, saxaphones, etc. and made all the noise they could. We got out those flares of yours and burned them (after dark) and Ellen unearthed some of those precious fire-crackers of hers (years old, I think) and she and father added their share to the general racket. The news came at 4 P.M. and the racket lasted till after midnight. It was spasmodic, but they were still celebrating when I went to bed at 12. All government workers were given a two-day holiday, unless asked to remain on the job (insurance requirement). Father was delighted to be among those few because he has lost so much time. He says that they haven’t done one single thing – just sit in the sun and draw their pay. Slick? Well, anyhow, were all hoping that the time of seeing our boy as soon as the red-tape unwinds, won’t be too far away. Now, you can write what you want, can’t you? No more censorship, is there? It is off all news!

Ellen has worked thru all the excitement. The peas and beans had to be taken care of, at any cost. She says that she will tell her grandchildren that she didn’t go to Seattle and celebrate because she was so patriotic that she worked to save food for the “starving millions.” The truth of the matter is this – the stuff needed to be packaged, all right, but time and a half ($1.06) was quite an inducement to be patriotic. She drew a check for $60.00 (2 wks.) after Income tax, C.A.B. Ind. Ins. had all been subtracted. Thinks she will have work right up to the day that school starts and probably a week or so afterwards, so she is “really in the money.” It is these kids last chance to get easy money, so they are really putting in time. She has been putting in 11 hrs for the last week. Well, dear, we hope you are well and that you will be relieved on schedule. God bless you! We love you! - Mother