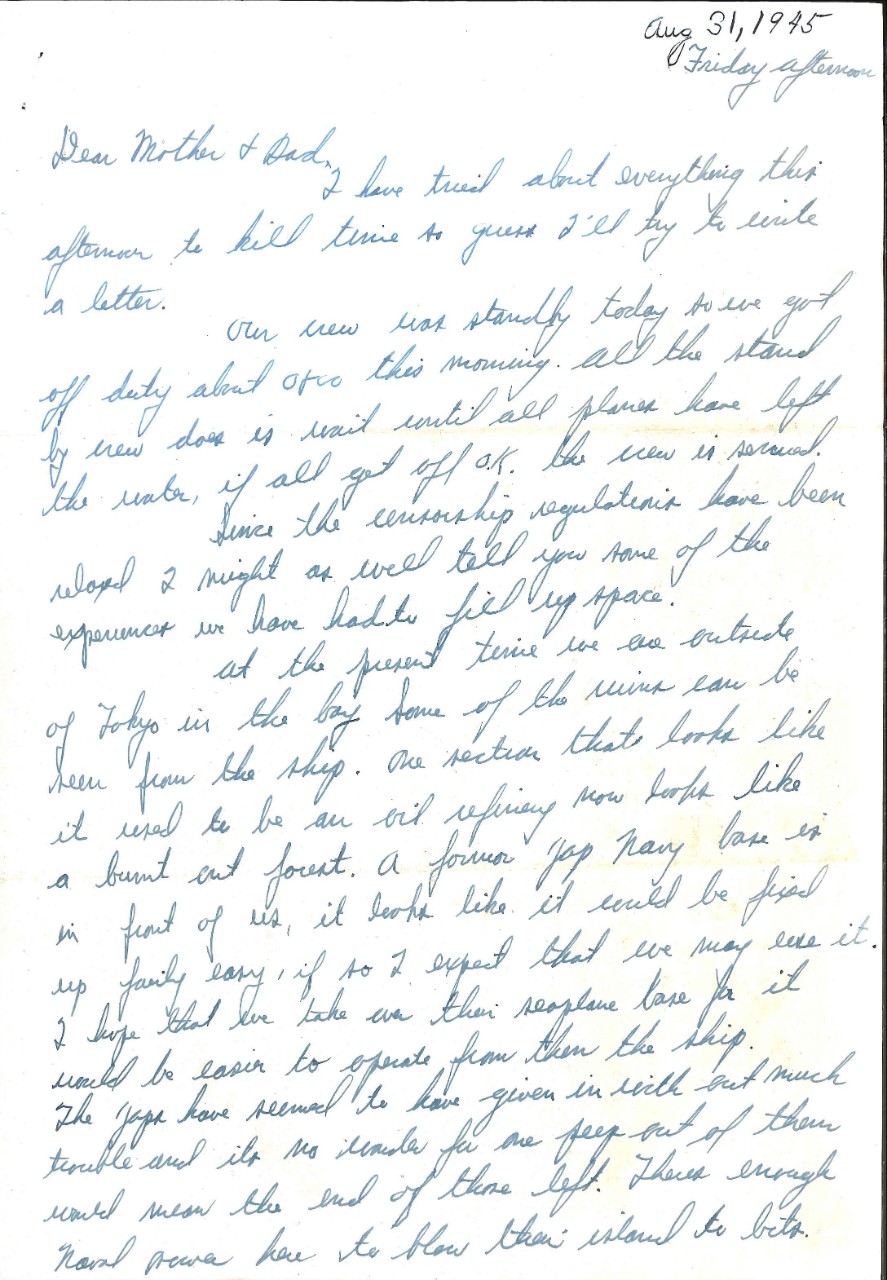 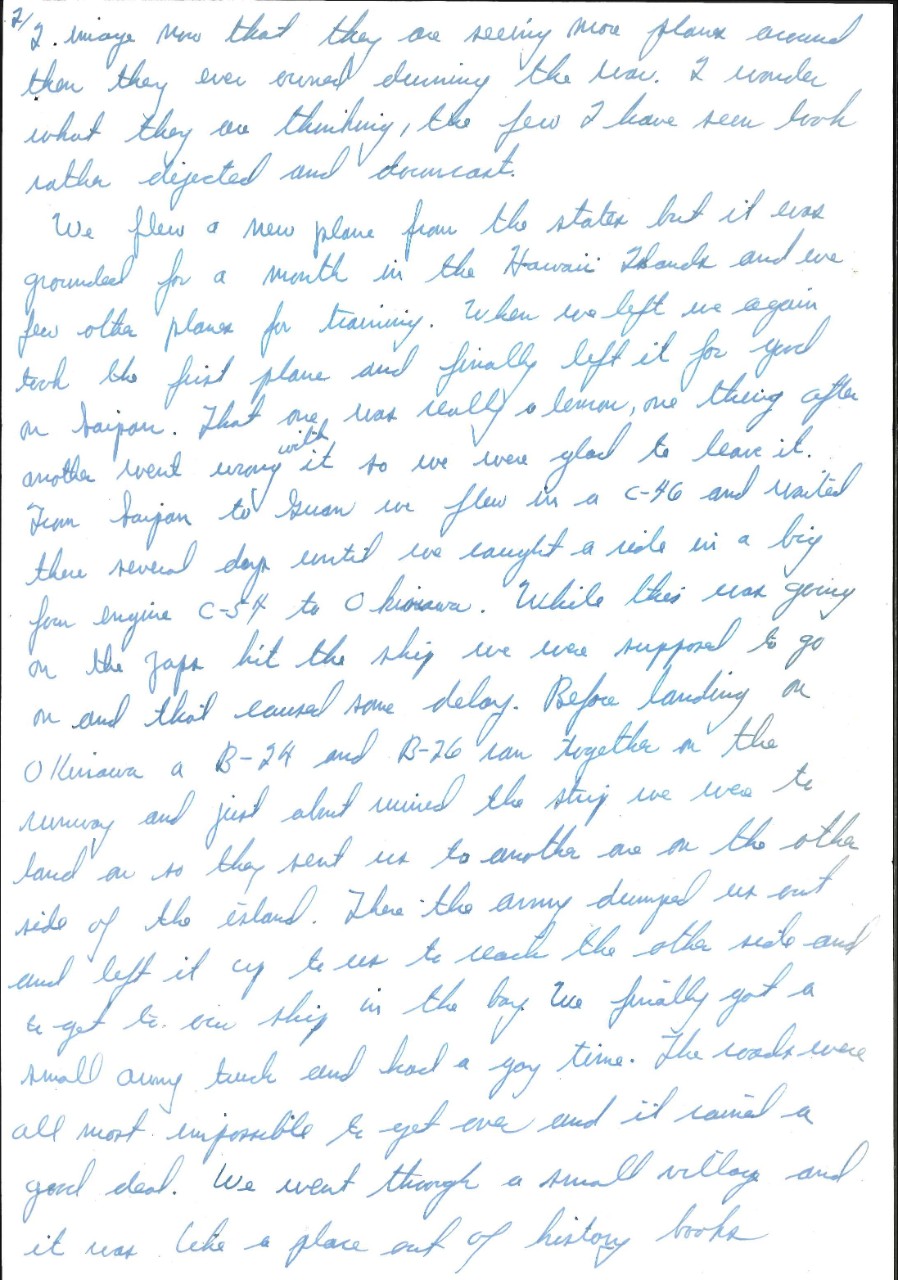 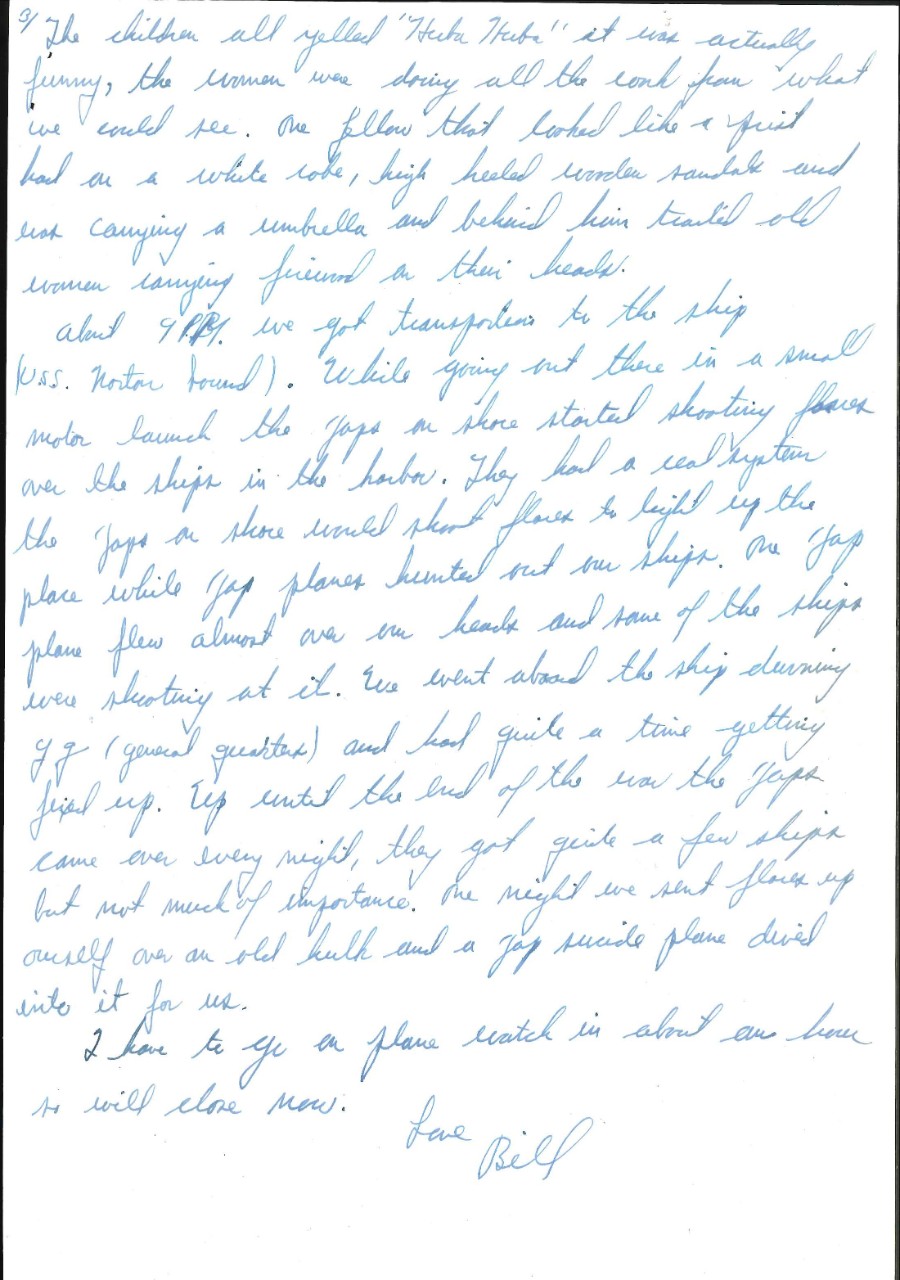 I have tried about everything this afternoon to kill time so guess I’ll try to write a letter.

Our crew was standby today so we got off duty about 0800 this morning. All the stand by crew does is wait until all planes have left the water, if all get off o.k. the crew is secured.

Since the censorship regulations have been relaxed I might as well tell you some of the experiences we have had to fill up space.

At the present time we are outside of Tokyo in the bay. Some of the ruins can be seen from the ship. One section that looks like it used to be an oil refinery now looks like a burnt out forest. A former Jap Navy base is in front of us, it looks like it could be fixed up fairly easy, if so I expect that we may use it.  I hope that we take over their seaplane base for it would be easier to operate from than the ship. The Japs have seemed to have given in with out much trouble and it’s no wonder for one peep out of them would mean the end of those left. Theres enough Naval power here to blow their island to bits. I imagine now that they are seeing more planes around them they ever owned during the war. I wonder what they are thinking, the few I have seen look rather dejected and downcast.

We flew a new plane from the states but it was grounded for a month in the Hawaii Islands and we flew other planes for training. When we left we again took the first plane and finally left it for good on Saipan. That one was really a lemon, one thing after another went wrong with it so we were glad to leave it.  From Saipan to Guam we flew in a C-46 and waited there for several days until we caught a ride in a big four engine C-54 to Okinawa. While this was going on the Japs hit the ship we were supposed to go on and that caused some delay. Before landing on Okinawa a B-24 and B-26 ran together on the runway and just about ruined the strip were to land on so they sent us to another one on the other side of the island. There the Army dumped us out and left it up to us to reach the other side and to get to our ship in the bay.  We finally got a small Army truck and had a gay time. The roads were all most impossible to get over and it rained a good deal. We went through a small village and it was like a place out of history books. The children all yelled “Huba Huba” it was actually funny, the women were doing all the work from what we could see. One fellow that looked like a priest had on a white robe, high heeled wooden sandals and was carrying a umbrella and behind him trailed old women carrying firewood on their heads.

About 9 p.m. we got transportation to the ship (U.S.S. Norton Sound). While going out there in a small motor launch the Japs on shore started shooting flares over the ships in the harbor.  They had a real system the Japs on shore would shoot flares to light up the place while Jap planes hunted out our ships.  One Jap plane flew almost over our head and some of the ships were shooting at it. We went aboard the ships during GQ (general quarters) and had quite a time getting fixed up.  Up until the end of the war the Japs came over every night, they got quite a few ships but not much of importance. One night we sent flares up ourself over an old hulk and a Jap suicide plane dived into it for us.

I have to go on plane watch in about one hour so will close now.