Letter from James Wright to his parents, September 5, 1945 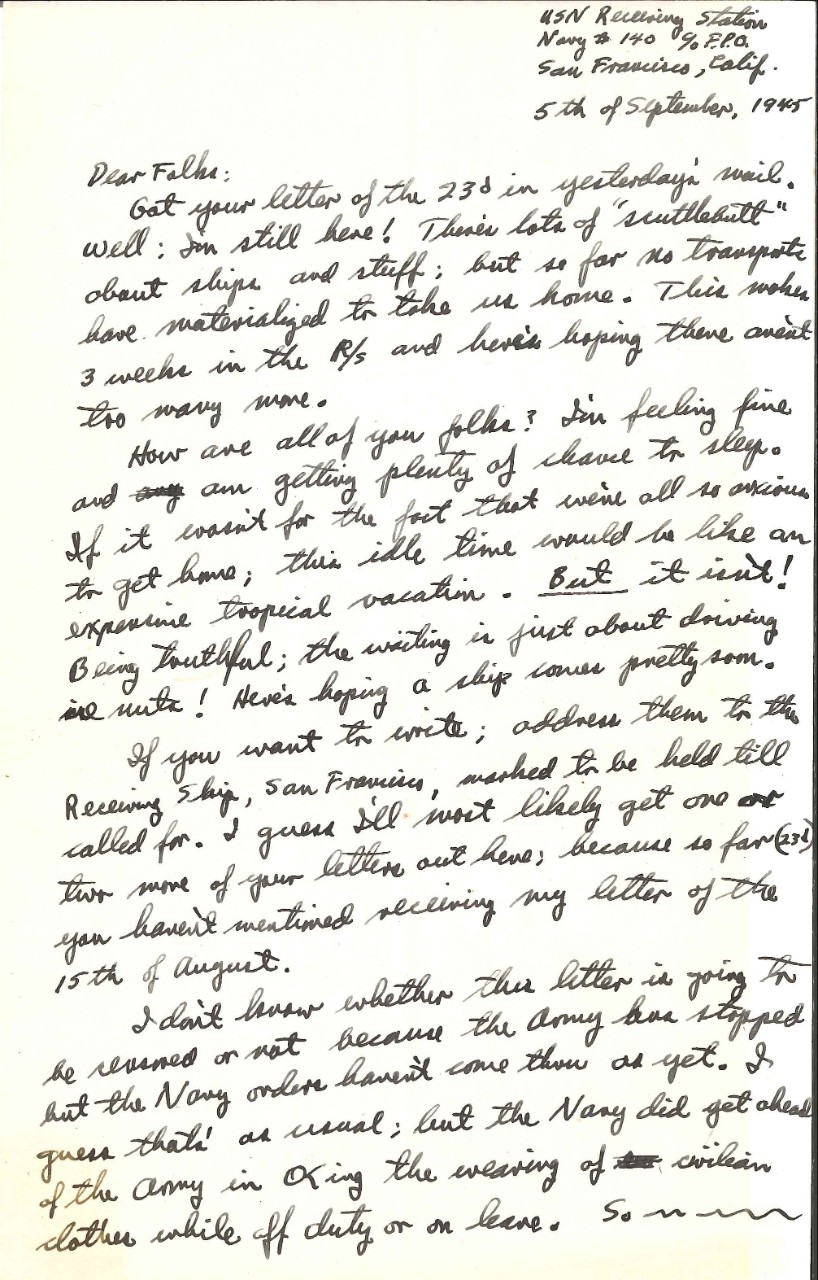 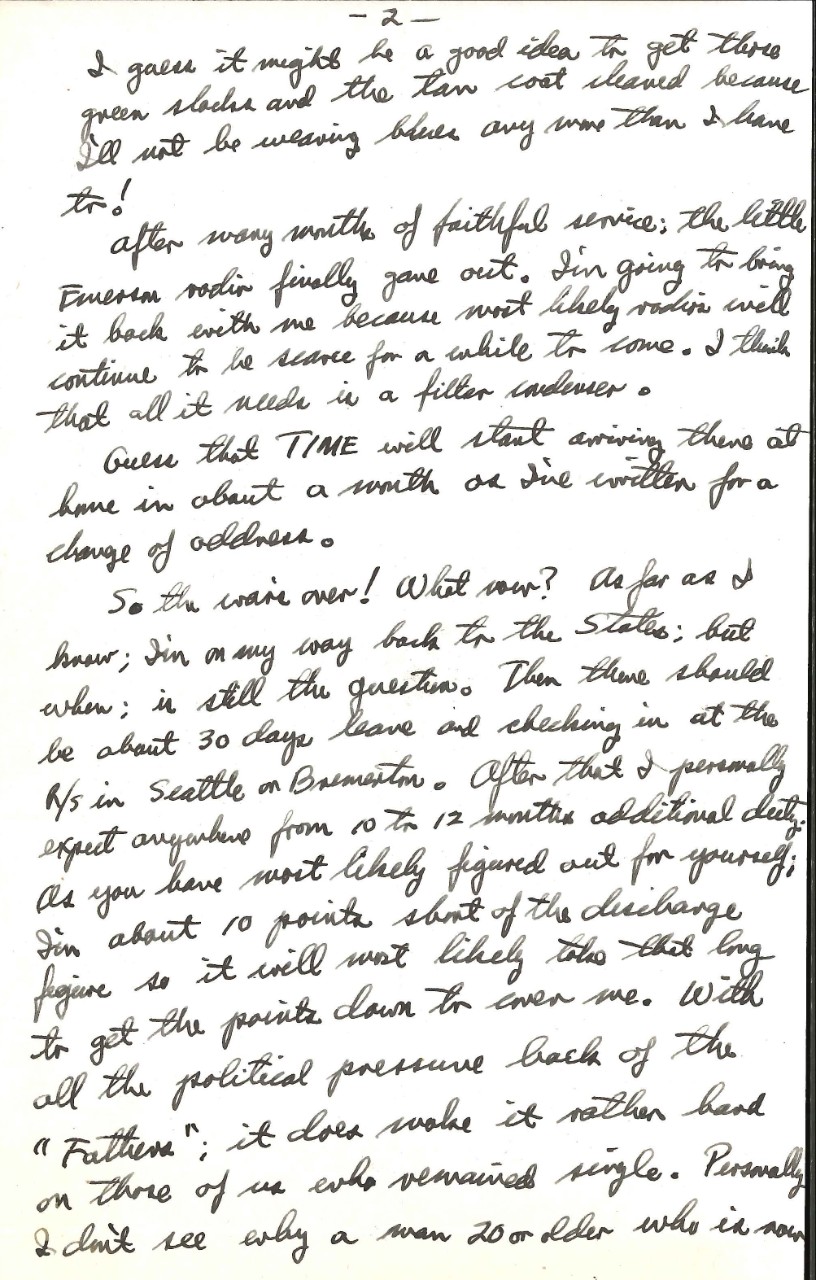 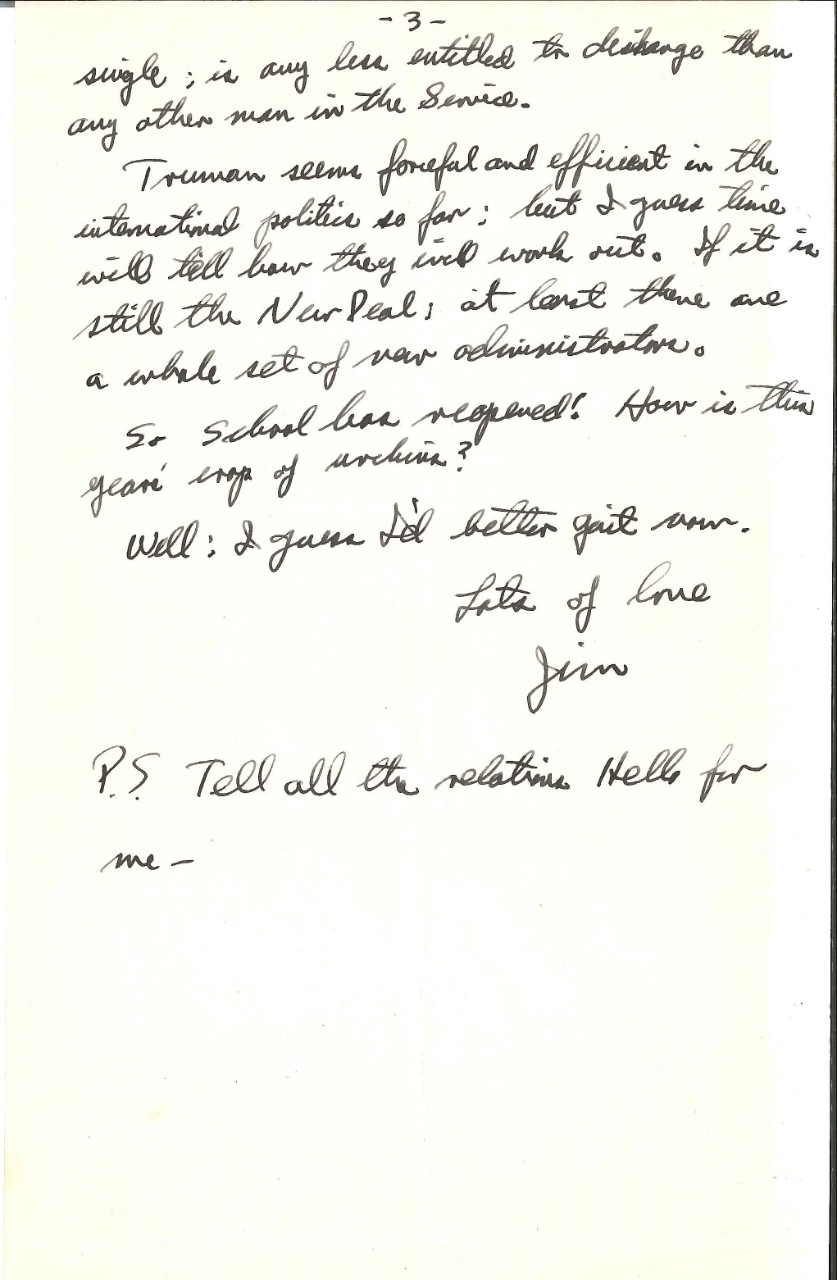 Got your letter of the 23d  in yesterday’s mail.  Well:  I’m still here!  There’s lots of “scuttlebutt” about ships and stuff; but so far no transports have materialized to take us home.  This makes 3 weeks the R/S and here’s hoping there aren’t too many more.

How are all of you folks?  I’m feeling fine and am getting plenty of chance to sleep.  If it wasn’t for the fact that we’re all so anxious to get home; this idle time would be like an expensive tropical vacation.  But it isn’t!  Being truthful; the waiting is just about driving me nuts!  Here’s hoping a ship comes pretty soon.

If you want to write; address them to the Receiving Ship, San Francisco, marked to be held till called for.  I guess I’ll most likely get one or two more of your letters out here, because so far (23d) you haven’t mentioned receiving my letter of the 15th of August.

I don’t know whether this letter is going to be censored or not because the Army has stopped but the Navy orders haven’t come thru as yet.  I guess that’s as usual; but the Navy did get ahead of the Army in OKing the wearing of civilian clothes while off duty or on leave.  So --- I guess it might be a good idea to get those green slacks and the tan coat cleaned because I’ll not be wearing blues any more than I have to!

After many months of faithful service; the little Emerson radio finally gave out.  I’m going to bring it back with me because most likely radios will continue to be scarce for a while to come, I think that all it needs is a filter condenser.

Guess that TIME will start arriving there at home in about a month as I’ve written for a change of address.  So the war’s over!  What now?  As far as I know; I’m on my way back to the States; but when; is still the question.  Then there should be about 30 days leave and checking in at the R/S in Seattle or Bremerton.  After that I personally expect anywhere from 10 to 12 months additional duty.  As you have most likely figured out for yourself; I’m about 10 points short of the discharge figure so it will most likely take that long to get the points down to cover me.  With all the political pressure on the backs of the “Fathers”; it does make it rather hard on those of us who remained single.  Personally, I don’t see why a man 20 or older who is now single; is any less entitled to discharge than any other man in the Service.

Truman seems forceful and efficient in the international politics so far; but I guess time will tell how they will work out.  If it is still the New Deal; at least there are a whole set of new administrators.

So school has reopened!  How is this year’s crop of urchins?