Letter to James Wright from his mother, September 14, 1945 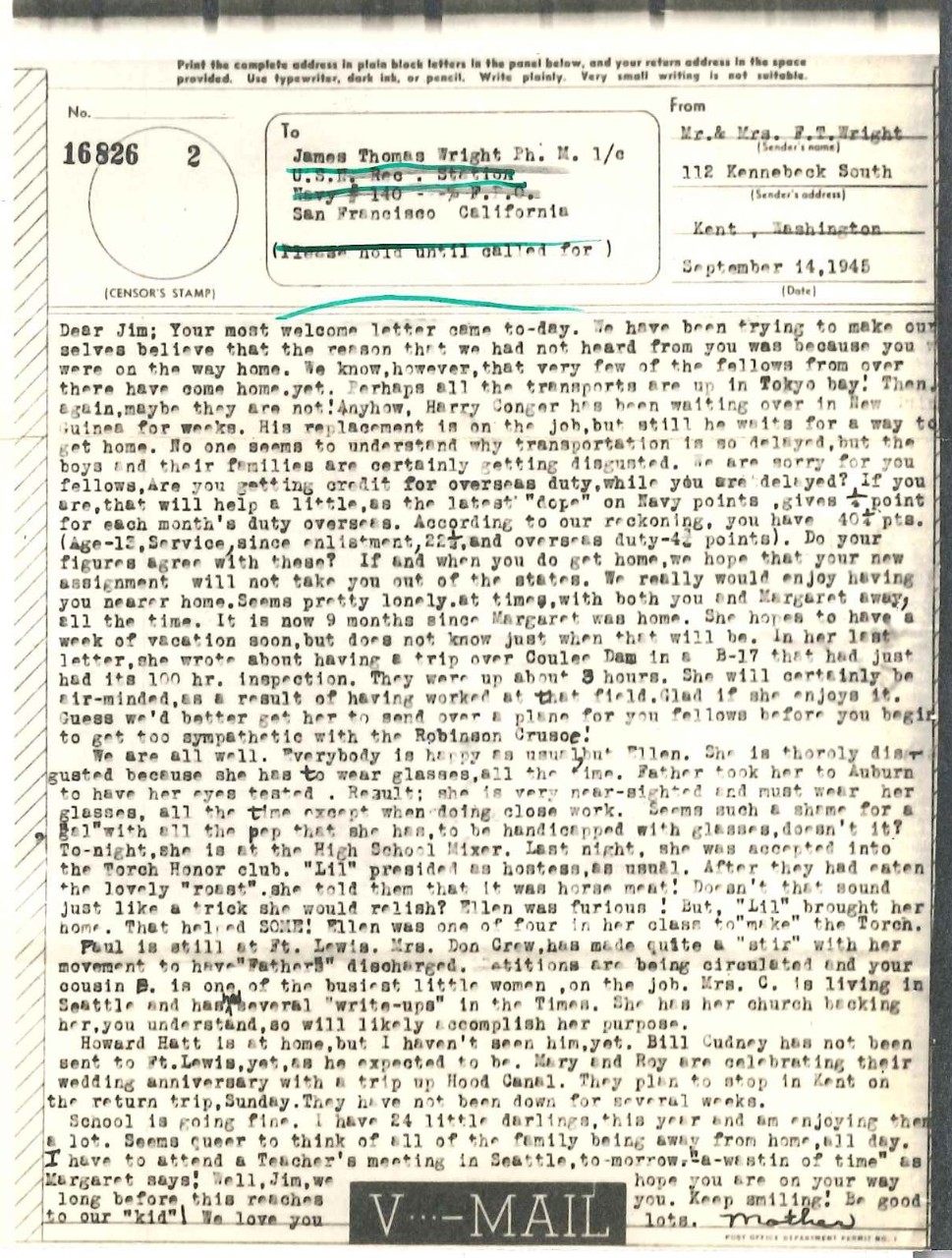 (Please hold until called for) – [Crossed out]

Dear Jim: Your most welcome letter came to-day. We have been trying to make ourselves believe that the reason that we had not heard from you was because you were on the way home. We know, however, that very few of the fellows from over there have come home yet. Perhaps all the transports are up in Tokyo bay! Then again, maybe they are not! Anyhow, Harry Conger has been waiting over in New Guinea for weeks. His replacement is on the job, but still he waits for a way to get home. No one seems to understand why transportation is so delayed, but the boys and their families are certainly getting disgusted. We are sorry for you fellows. Are you getting credit for overseas duty while you are delayed? If you are, that will help a little, as the latest “dope” on Navy points gives ½ point for each month’s duty overseas. According to our reckoning, you have 40 ¼ pts. (Age – 13, Service, since enlistment, 22 ¼, and overseas duty – 4 ¾ points). Do your figures agree with these? If and when you do get home, we hope that your new assignment will not take you out of the states. We really would enjoy having you nearer home. Seems pretty lonely at times, with both you and Margaret away, all the time. It is now 9 months since Margaret was home. She hopes to have a week of vacation soon, but does not know just when that will be. In her last letter, she wrote about having a trip over Coulee Dam in a B-17 that had just had its 100 hr. inspection. They were up about 3 hours. She will certainly be air-minded, as a result of having worked at that field. Glad if she enjoys it. Guess we’d better get her to send over a plane for you fellows before you begin to get too sympathetic with the Robinson Crusoe!

We are all well. Everybody is happy as usual but Ellen. She is thoroly [sic] disgusted because she has to wear glasses all the time. Father took her to Auburn to have her eyes tested. Result: she is very near-sighted and must wear her glasses all the time except when doing close work. Seems such a shame for a gal with all the pep that she has, to be handicapped with glasses, doesn’t it? To-night she is at the High School Mixer. Last night, she was accepted into the Torch Honor club. “Lil” presided as hostess, as usual. After they had eaten the lovely “roast” she told them that it was horse meat! Doesn’t that sound just like a trick she would relish? Ellen was furious! But, “Lil” brought her home. That helped SOME! Ellen was one of four in her class to “make” the Torch.

Paul is still at Ft. Lewis. Mrs. Don Crew has made quite a “stir” with her movement to have “Father” discharged. Petitions are being circulated and your cousin B. is one of the busiest little women on the job. Mrs. C. is living in Seattle and has had several “write-ups” in the Times. She has her church backing her, you understand, so will likely accomplish her purpose.

Howard Hatt is at home, but I haven’t seen him yet. Bill Cudney has not been sent to Ft. Lewis yet, as he expected to be. Mary and Roy are celebrating their wedding anniversary with a trip up Hood Canal. They plan to stop in Kent on the return trip Sunday. They have not been down for several weeks.

School is going fine. I have 24 little darlings this year and am enjoying them a lot. Seems queer to think of all of the family being away from home all day. I have to attend a Teacher’s meeting in Seattle to-morrow – “a-wastin of time” as Margaret says! Well, Jim, we hope you are on your way long before this reaches you. Keep smiling! Be good to our “kid”! We love you lots. Mother.