Letter from James Wright to his parents, October 15, 1945 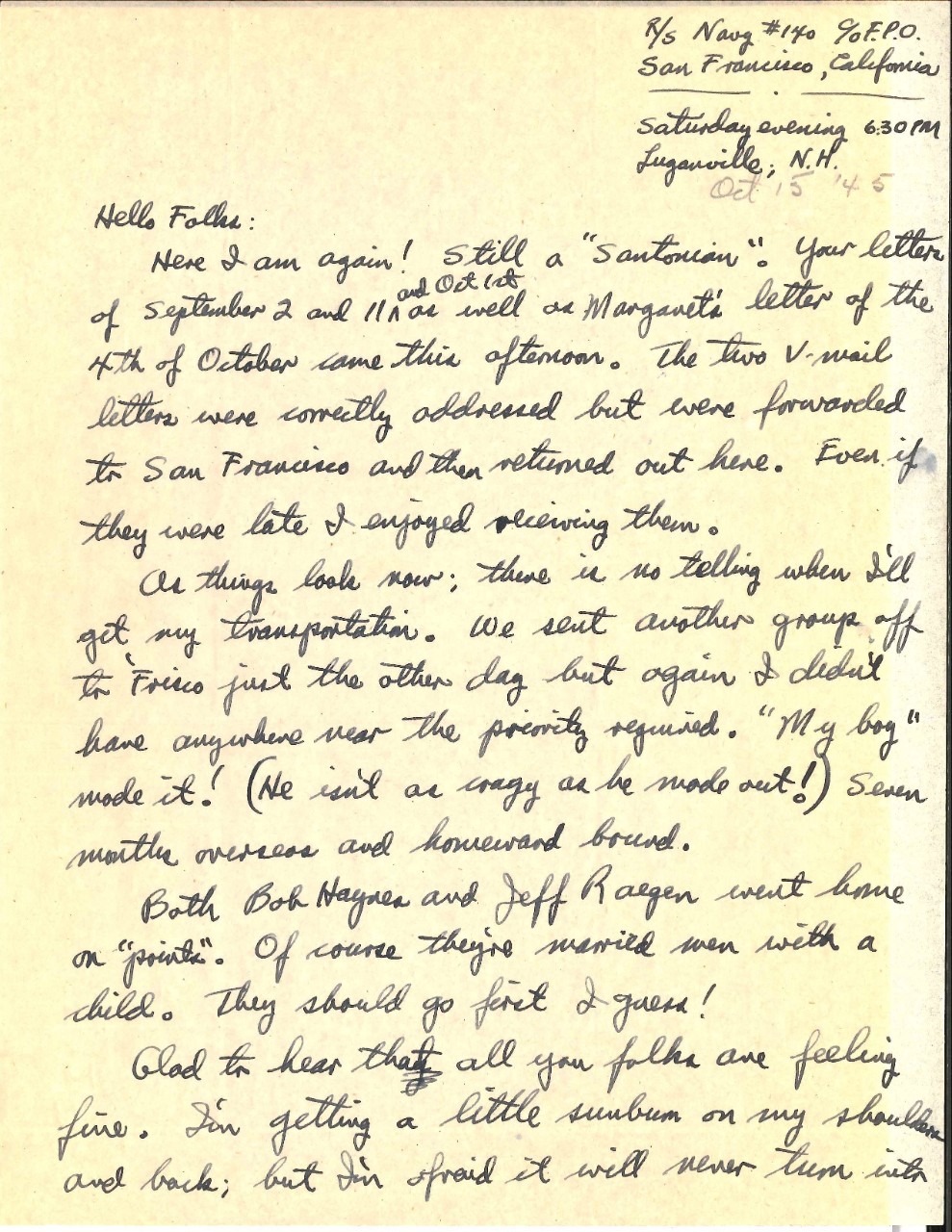 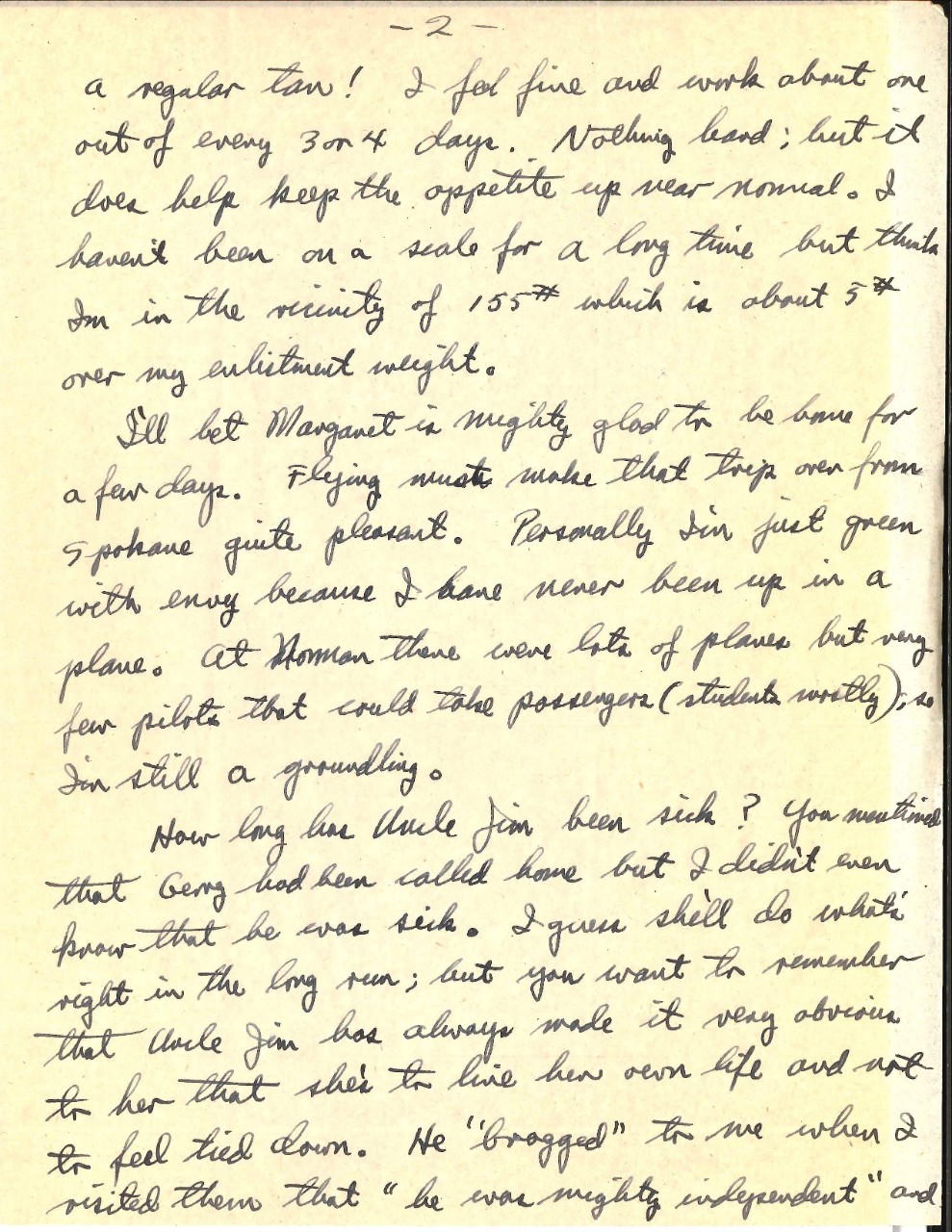 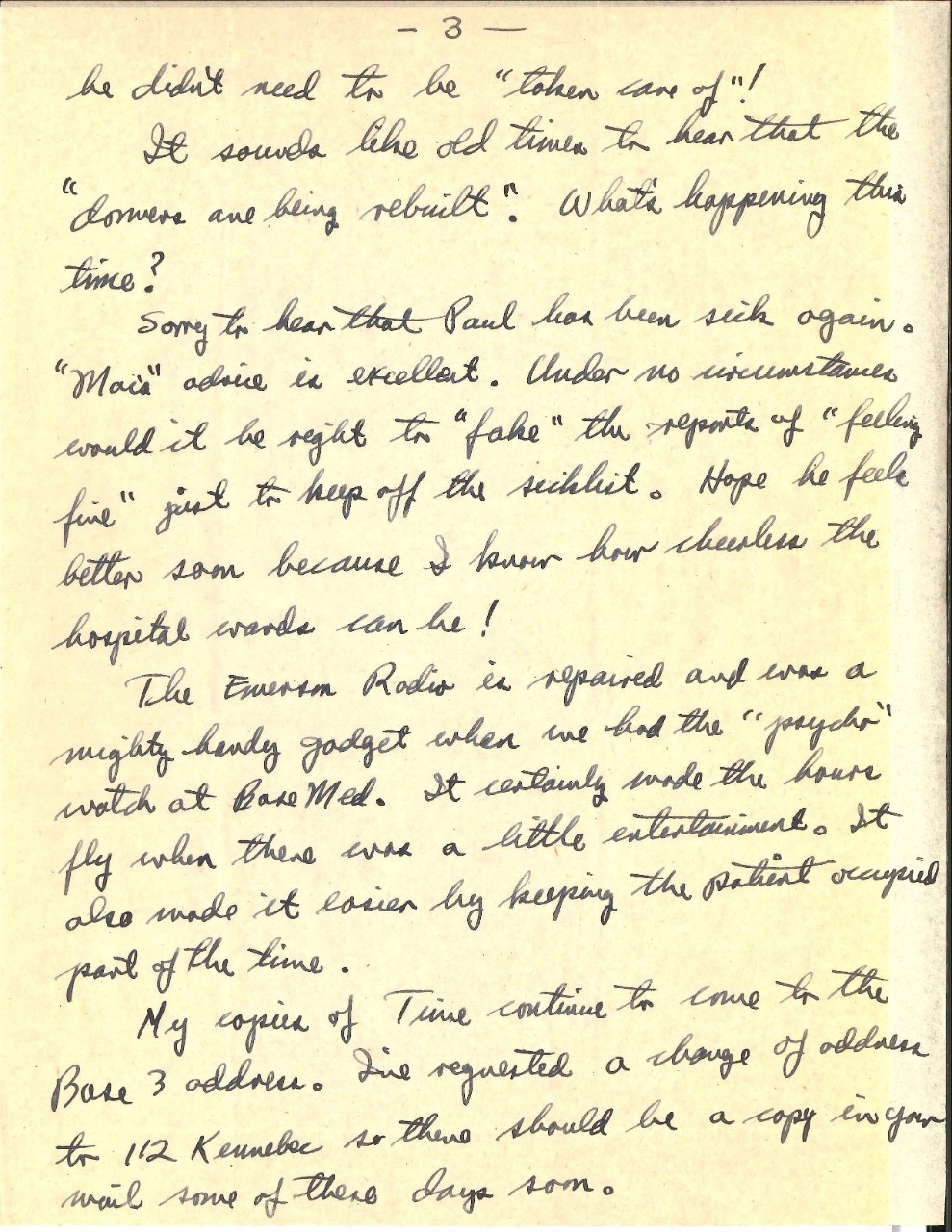 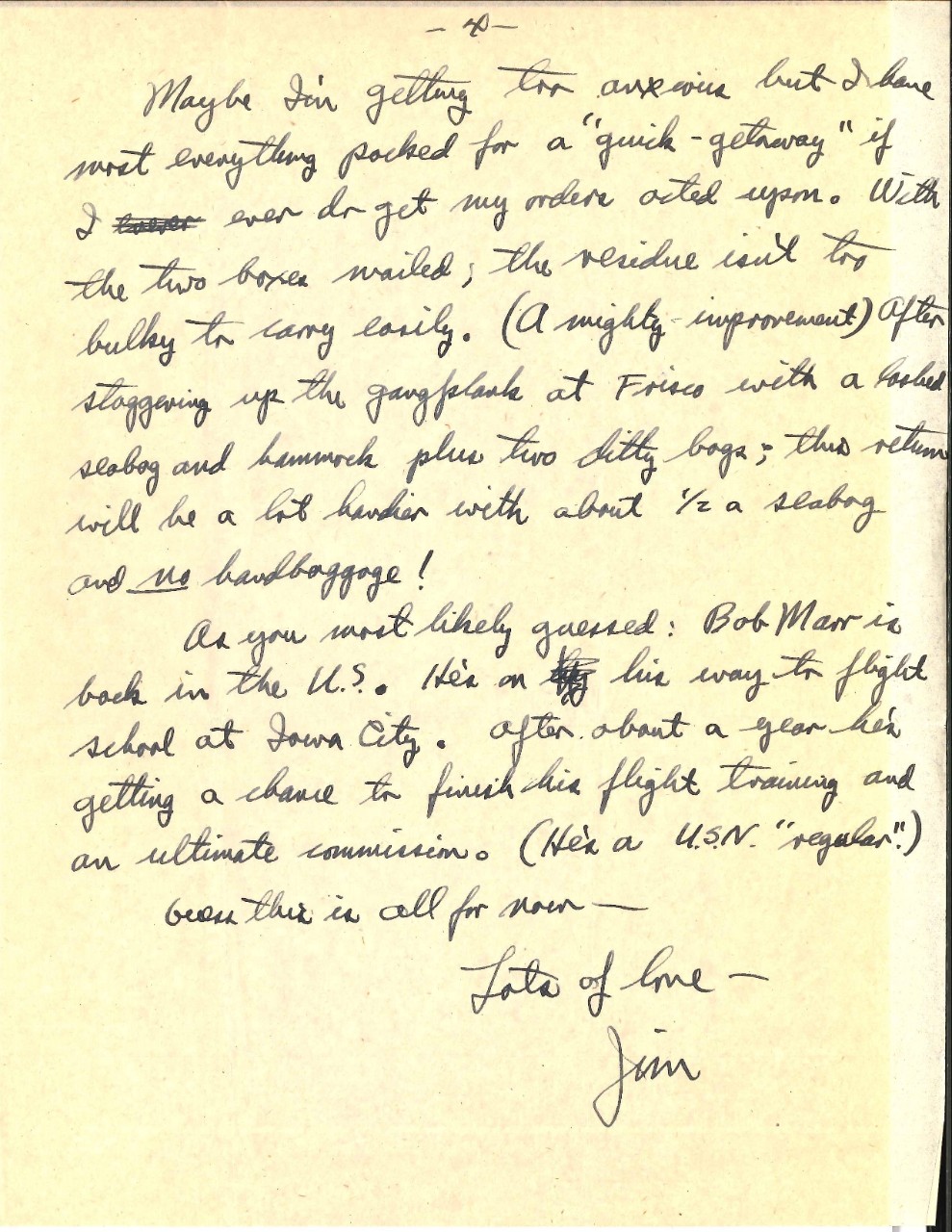 Here I am again! Still a “Santonian”. Your letter of September 2 and 11 and Oct 1st as well as Margaret’s letter of the 4th of October came this afternoon. The two V-mail letters were correctly addressed but were forwarded to San Francisco and then returned out here. Even if they were late I enjoyed receiving them.

As things look now; there is no telling when I’ll get my transportation. We sent another group off to ‘Frisco just the other day but again I didn’t have anywhere near the priority required. “My boy” made it! (He isn’t as crazy as he made out!) Seven months overseas and homeward bound.

Both Bob Haynes and Jeff Raegen went home on “points”. Of course they’re married men with a child. They should go first I guess!

Glad to hear that all you folks are feeling fine. I’m getting a little sunburn on my shoulders and back; but I’m afraid it will never turn into a regular tan! I feel fine and work about one out of every 3 or 4 days. Nothing hard; but it does help keep the appetite up near normal. I haven’t been on a scale for a long time but think I’m in the vicinity of 155# which is about 5# over my enlistment weight.

I’ll bet Margaret is mighty glad to be home for a few days. Flying must make that trip over from Spokane quite pleasant. Personally I’m just green with envy because I have never been up in a plane. At Norman there were lots of planes but very few pilots that could take passengers (students mostly), so I’m still a groundling.

How long has Uncle Jim been sick? You mentioned that Gerry had been called home but I didn’t even know that he was sick. I guess she’ll do what’s right in the long run; but you want to remember that Uncle Jim has always made it very obvious to her that she’s to live her own life and not to feel tied down. He “bragged” to me when I visited then that “he was mighty independent” and he didn’t need to be “taken care of”!

It sounds like old times to hear that the “dormers are being rebuilt”. What’s happening this time?

Sorry to hear that Paul has been sick again. “Ma’s” advice is excellent. Under no circumstances would it be right to “fake” the reports of “feeling fine” just to keep off the sicklist. Hope he feels better soon because I know how cheerless the hospital wards can be!

The Emerson Radio is repaired and was a mighty handy gadget when we had the “psycho” watch at Base Med. It certainly made the hours fly when there was a little entertainment. It also made it easier by keeping the patient occupied part of the time.

My copies of Time continue to come to the Base 3 address. I’ve requested a change of address to 112 Kennebec so there should be a copy in your mail some of these days soon.

Maybe I’m getting too anxious but I have most everything packed for a “quick-getaway” if I ever do get my orders acted upon. With the two boxes mailed; the residue isn’t too bulky to carry easily. (A mighty improvement) After staggering up the gangplank at Frisco with a locked seabag and hammock plus two ditty bags; the return will be a lot handier with about ½ a seabag and no handbaggage!

As you most likely guessed; Bob Marr is back in the U.S. He’s on his way to flight school at Iowa City. After about a year he’s getting a chance to finish his flight training and an ultimate commission. (He’s a U.S.N. “regular”.)

Guess this is all for now –