Letter from James Wright to his parents, October 6, 1945 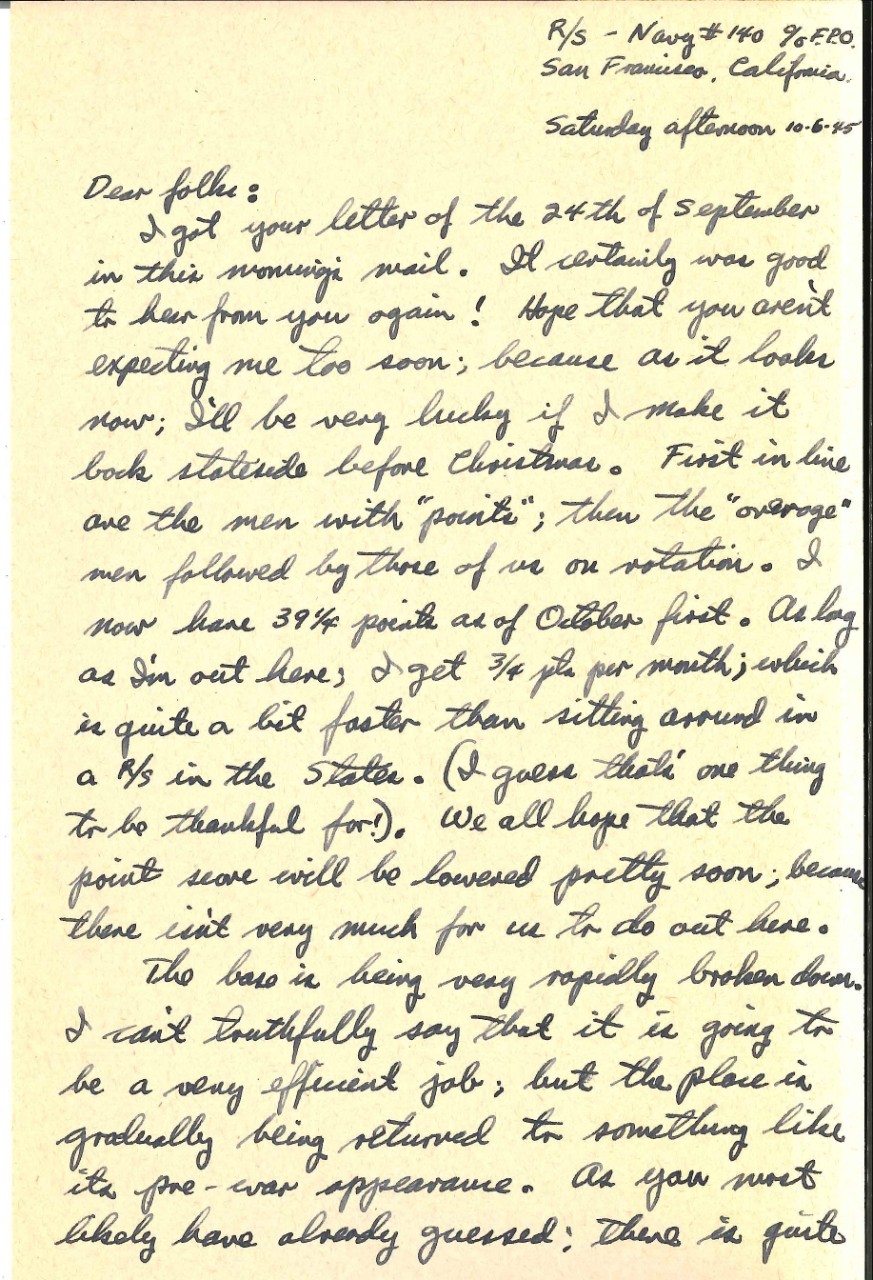 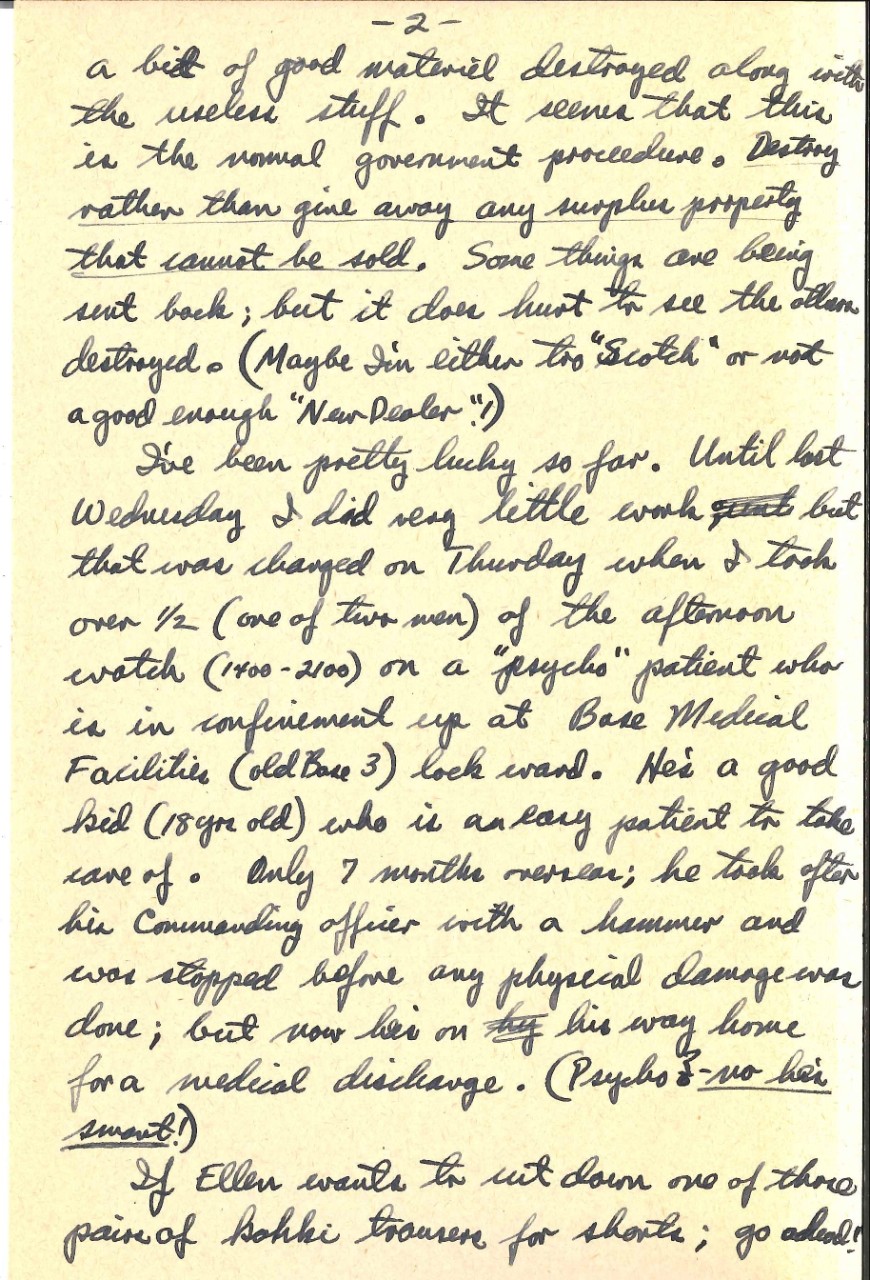 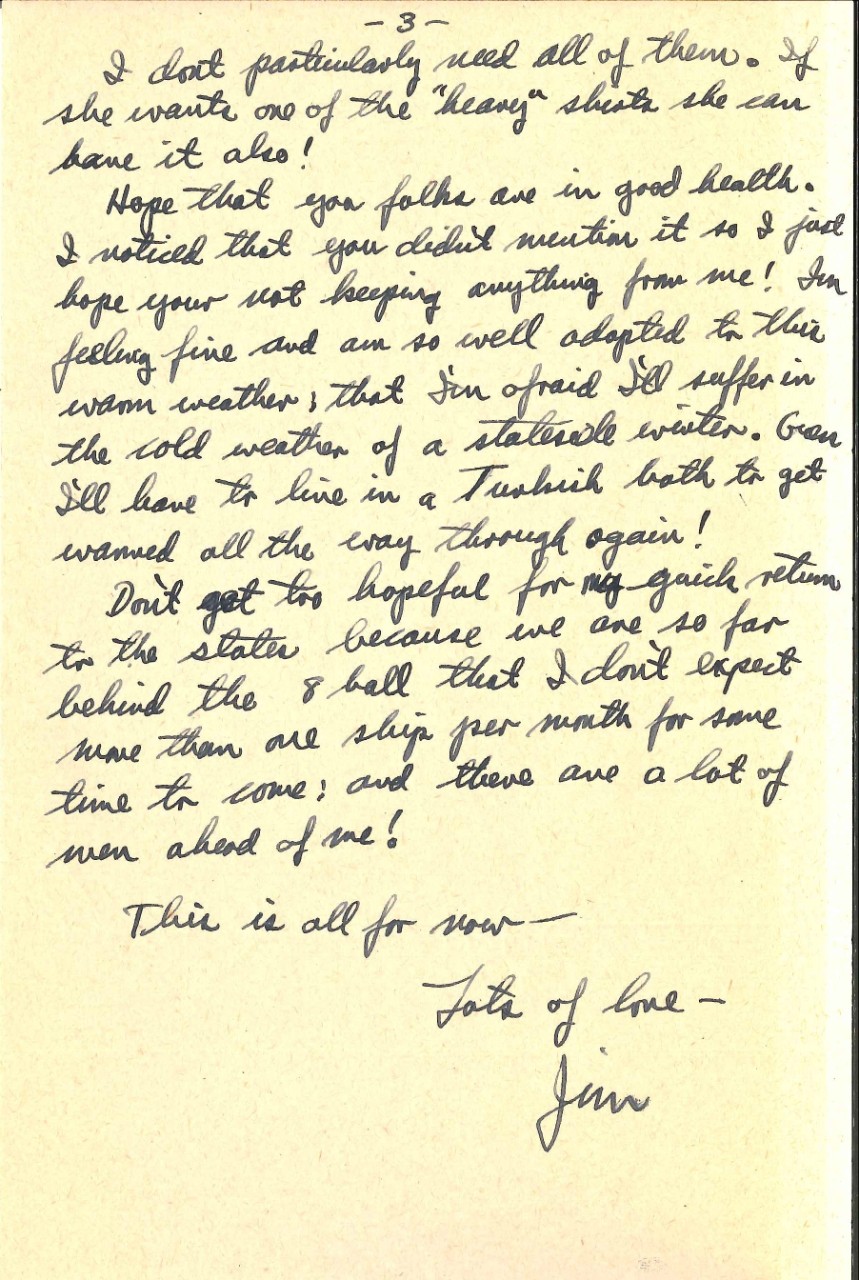 I got your letter of the 24th of September in this morning’s mail. It certainly was good to hear from you again! Hope that you aren’t expecting me too soon; because as it looks now; I’ll be very lucky to make it back stateside before Christmas. First in line are the men with “points”; then the “average” men followed by those of us on rotation. I now have 39 ¼ points as of October first. As long as I’m out here; I get ¾ pts per month; which is quite a bit faster than sitting around in a R/S in the States. (I guess that’s one thing to be thankful for!) We all hope that the point score will be lowered pretty soon; because there isn’t very much for us to do out here.

The base is being very rapidly broken down. I can’t truthfully say that it is going to be a very efficient job; but the place is gradually being returned to something like its pre-war appearance. As you most likely have already guess; there is quite a bit of good material destroyed along with the useless stuff. It seems that this is the normal government procedure. Destroy rather than give away any surplus property that cannot be sold. Some things are being sent back; but it does hurt to see the others destroyed. (Maybe I’m either too “Scotch” or not a good enough “New Dealer”!)

I’ve been pretty lucky so far. Until last Wednesday I did very little work, but that was changed on Thursday when I took over ½ (one of two men) of the afternoon watch (1400 – 2100) on a “psycho” patient who is in confinement up at Base Medical Facilities (old Base 3) lock ward. He’s a good kid (18 yrs old) who is an easy patient to take care of. Only 7 months overseas; he took after his Commanding officer with a hammer and was stopped before any physical damage was done; but now he’s on his way home for a medical discharge. (Psycho? No he’s smart!)

If Ellen wants to cut down one of those pairs of kahki [sic] trousers for shorts, go ahead! I don’t particularly need all of them. If she wants one of the “heavy” shirts she can have it also!

Hope that you folks are in good health. I noticed that you didn’t mention it so I just hope your [sic] not keeping anything from me! I’m feeling fine and am so well adapted to this warm weather; that I’m afraid I’ll suffer in the cold weather of a stateside winter. Guess I’ll have to live in a Turkish bath to get warmed all the way through again!

Don’t get too hopeful for my quick return to the states because we are so far behind the 8 ball that I don’t expect more than one ship per month for some time to come; there are a lot of men ahead of me!

This is all for now –