Letter from James Wright to his parents, September 26, 1945 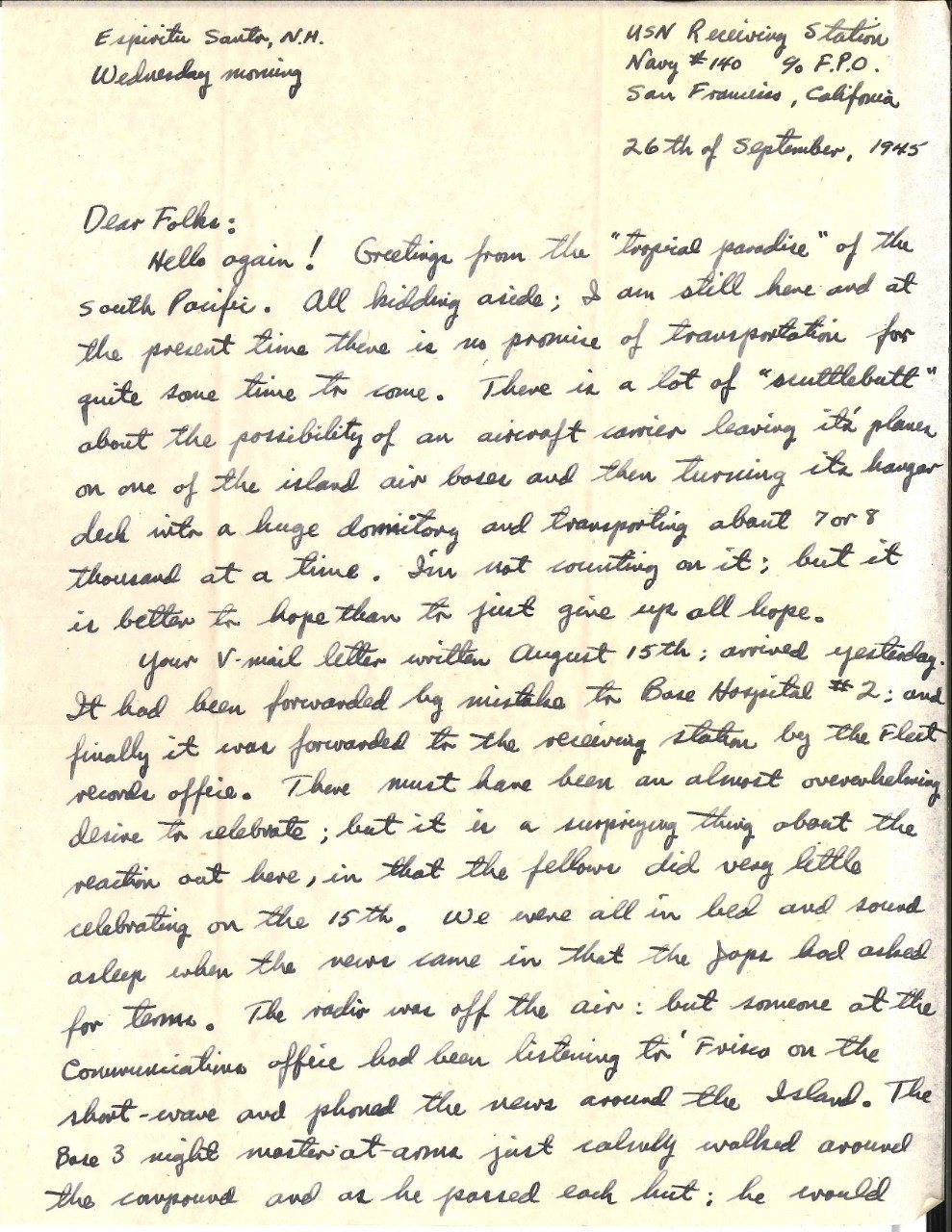 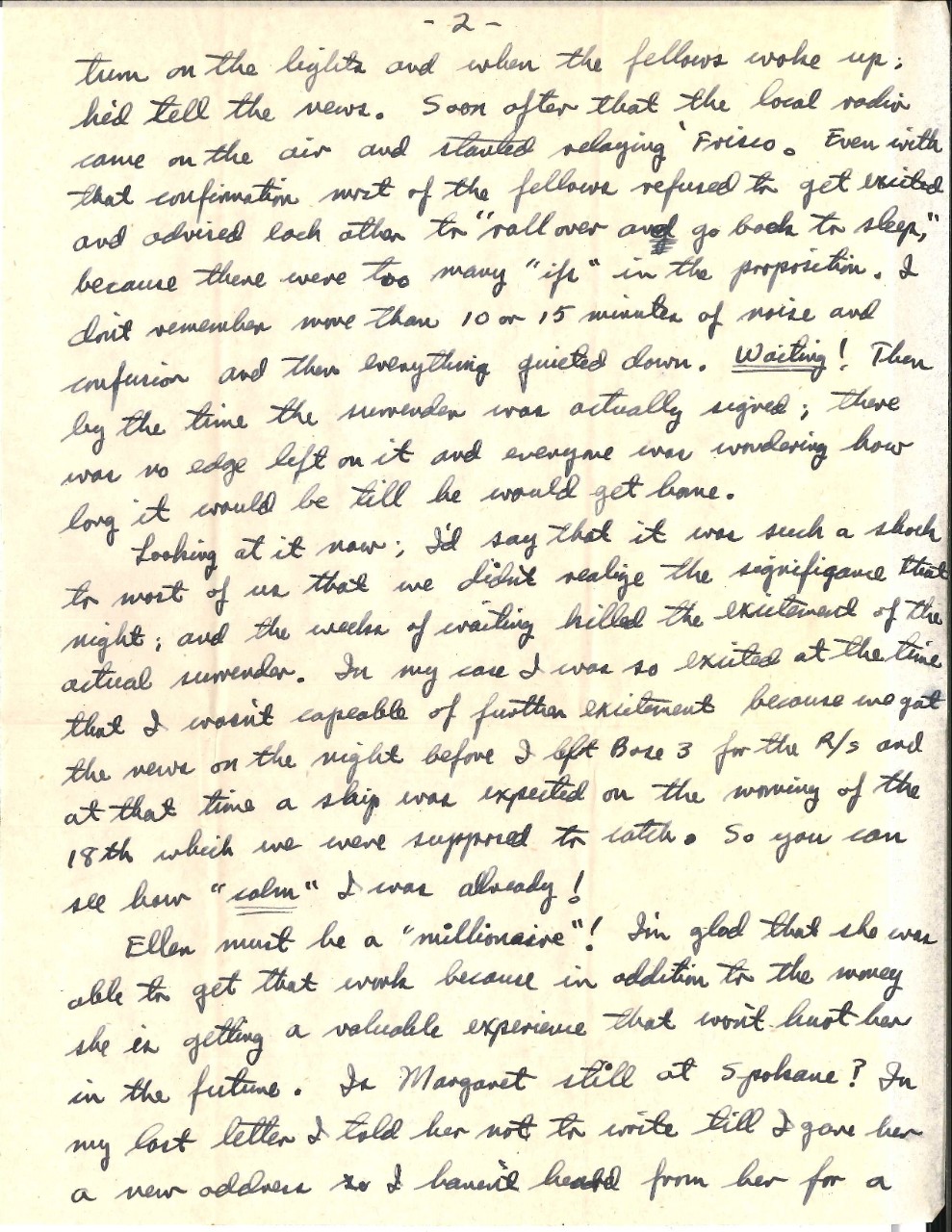 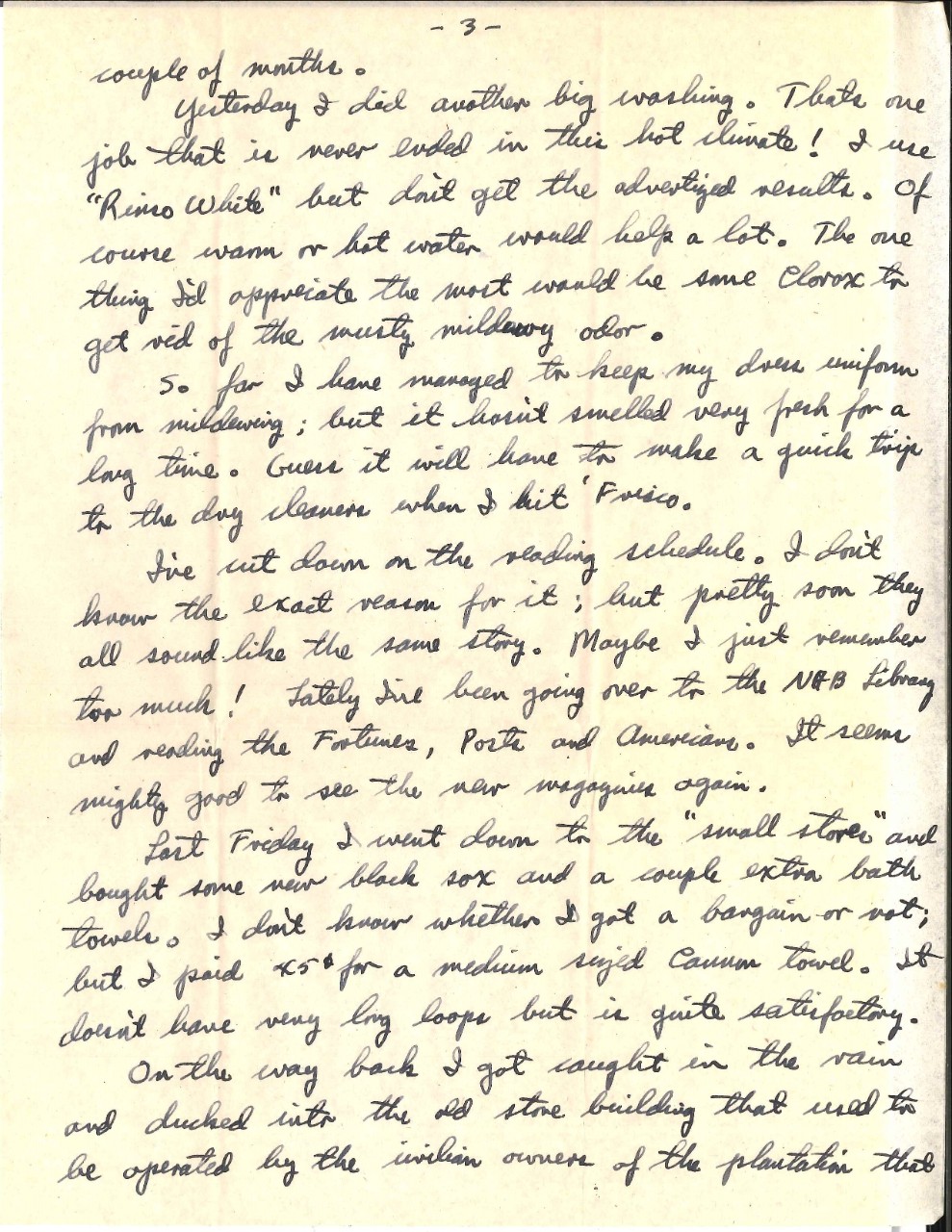 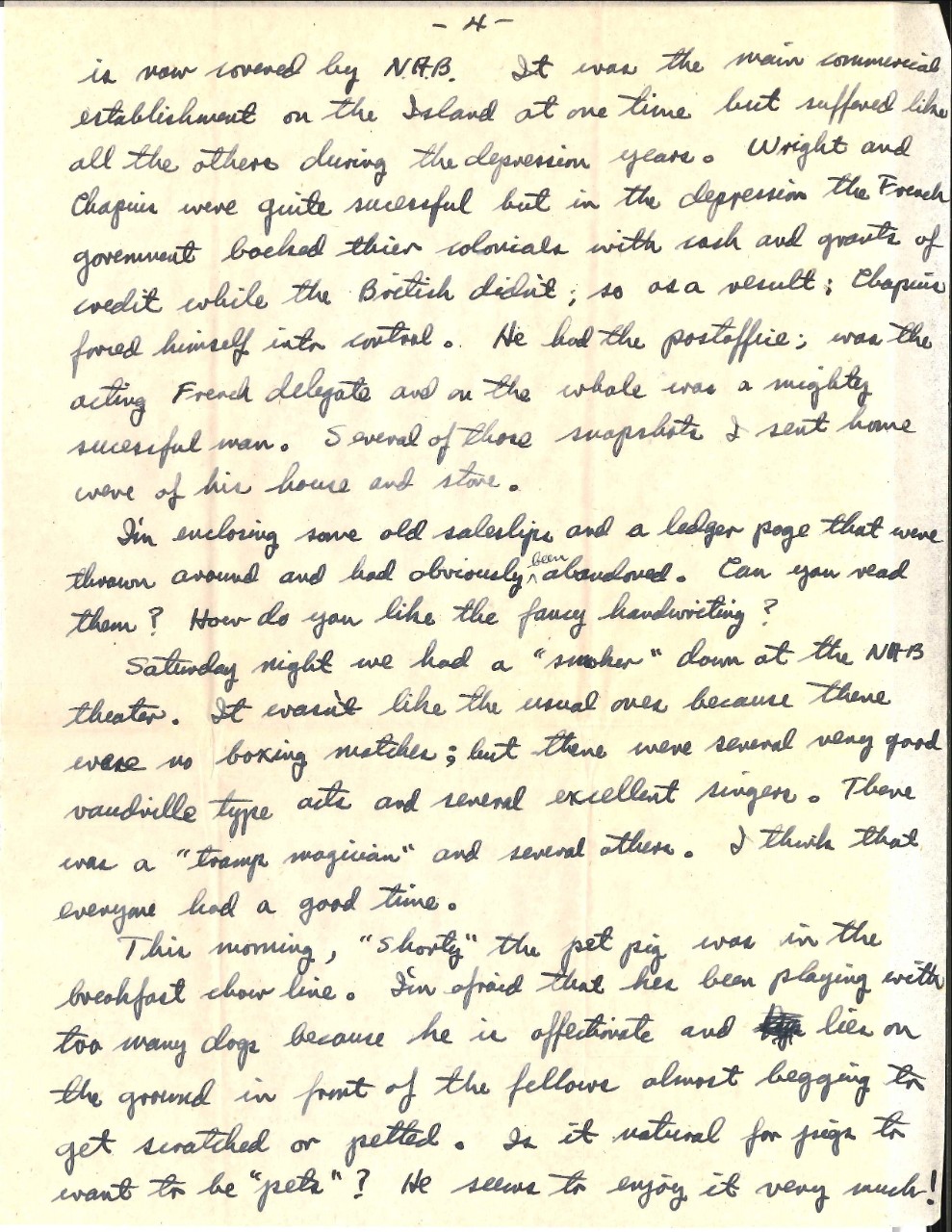 Hello again! Greetings from the “tropical paradise” of the South Pacific. All kidding aside; I am still here and at the present time there is no promise of transportation for quite some time to come. There is a lot of “scuttlebutt” about the possibility of an aircraft carrier leaving it’s [sic] planes on one of the island air bases and then turning its hanger deck into a huge dormitory and transporting about 7 or 8 thousand at a time. I’m not counting on it; but it is better to hope than to just give up all hope.

Your V-mail letter written August 15th arrived yesterday. It had been forwarded by mistake to Base Hospital #2 and finally it was forwarded to the receiving station by the Fleet records office. There must have been an almost overwhelming desire to celebrate; but it is a surprizing [sic] thing about the reaction out here, in that the fellows did very little celebrating on the 15th. We were all in bed and sound asleep when the news came in that the Japs had asked for terms. The radio was off the air but someone at the Communications office had been listening to ‘Frisco on the short-wave and phoned the news around the Island. The Base 3 night master-at-arms just calmly walked around the compound and as he passed each hut, he would turn on the lights and when the fellows woke up, he’d tell the news. Soon after that the local radio came on the air and started relaying ‘Frisco. Even with that confirmation most of the fellows refused to get excited and advised each other to “roll over and go back to sleep,” because there were too many “ifs” in the proposition. I don’t remember more than 10 or 15 minutes of noise and confusion and then everything quieted down. Waiting! Then by the time the surrender was actually signed, there was no edge left on it and everyone was wondering how long it would be till he would get home.

Looking at it now, I’d say that it was such a shock to most of us that we didn’t realize the significance that night; and the weeks of waiting killed the excitement of the actual surrender. In my case I was so excited at the time that I wasn’t capable of further excitement because we got the news on the night before I left Base 3 for the R/S and at that time a ship was expected on the morning of the 18th which we were supposed to catch. So you can see how “calm” I was already!

Ellen must be a “millionaire”! I’m glad that she was able to get that work because in addition to the money she is getting a valuable experience that won’t hurt her in the future. Is Margaret still at Spokane? In my last letter I told her not to write till I gave her a new address so I haven’t heard from her for a couple of months.

Yesterday I did another big washing. That’s one job that is never ended in this hot climate! I use “Rinso White” but don’t get the advertised results. Of course warm or hot water would help a lot. The one thing I’d appreciate the most would be some Clorox to get rid of the musty mildew odor.

So far I have managed to keep my dress uniform from mildewing; but it hasn’t smelled very fresh for a long time. Guess it will have to make a quick trip to the dry cleaner when I hit ‘Frisco.

I’ve cut down on the reading schedule. I don’t know the exact reason for it; but pretty soon they all sound like the same story. Maybe I just remember too much! Lately I’ve been going over to the NAB library and reading the Fortunes, Posts and Americans. It seems mighty good to see the new magazines again.

Last Friday I went down to the “small stores” and bought some new black sox and a couple extra bath towels. I don’t know whether I got a bargain or not; but I paid 45¢ for a medium sized Cannon towel. It doesn’t have very long loops but is quite satisfactory.

On the way back I got caught in the rain and ducked into the old stone building that used to be operated by the civilian owners of the plantation that is now covered by the N.A.B. It was the main commercial establishment on the Island at one time but suffered like all the others during the depression years. Wright and Chapuis were quite successful but in the depression the French government backed their colonials with cash and grants of credit while the British didn’t; so as a result, Chapuis forced himself into control. He had the postoffice [sic]; was the acting French delegate and on the whole was a mighty successful man. Several of those snapshots I sent home were of his house and store.

I’m enclosing some old saleslips [sic] and a ledger page that were thrown around and had obviously been abandoned. Can you read them? How do you like the fancy handwriting?

Saturday night we had a “smoker” down at the NAB theater. It wasn’t like the usual ones because there were no boxing matches; but there were several very good vaudville [sic] type acts and several excellent singers. There was a “tramp magician” and several others. I think that everyone had a good time.

This morning “shorty” the pet pig was in the breakfast chow line. I’m afraid that he’s been playing with too many dogs because he is affectionate and lies on the ground in front of the fellows almost begging to get scratched or petted. Is it natural for pigs to want to be “pets”? He seems to enjoy it very much!