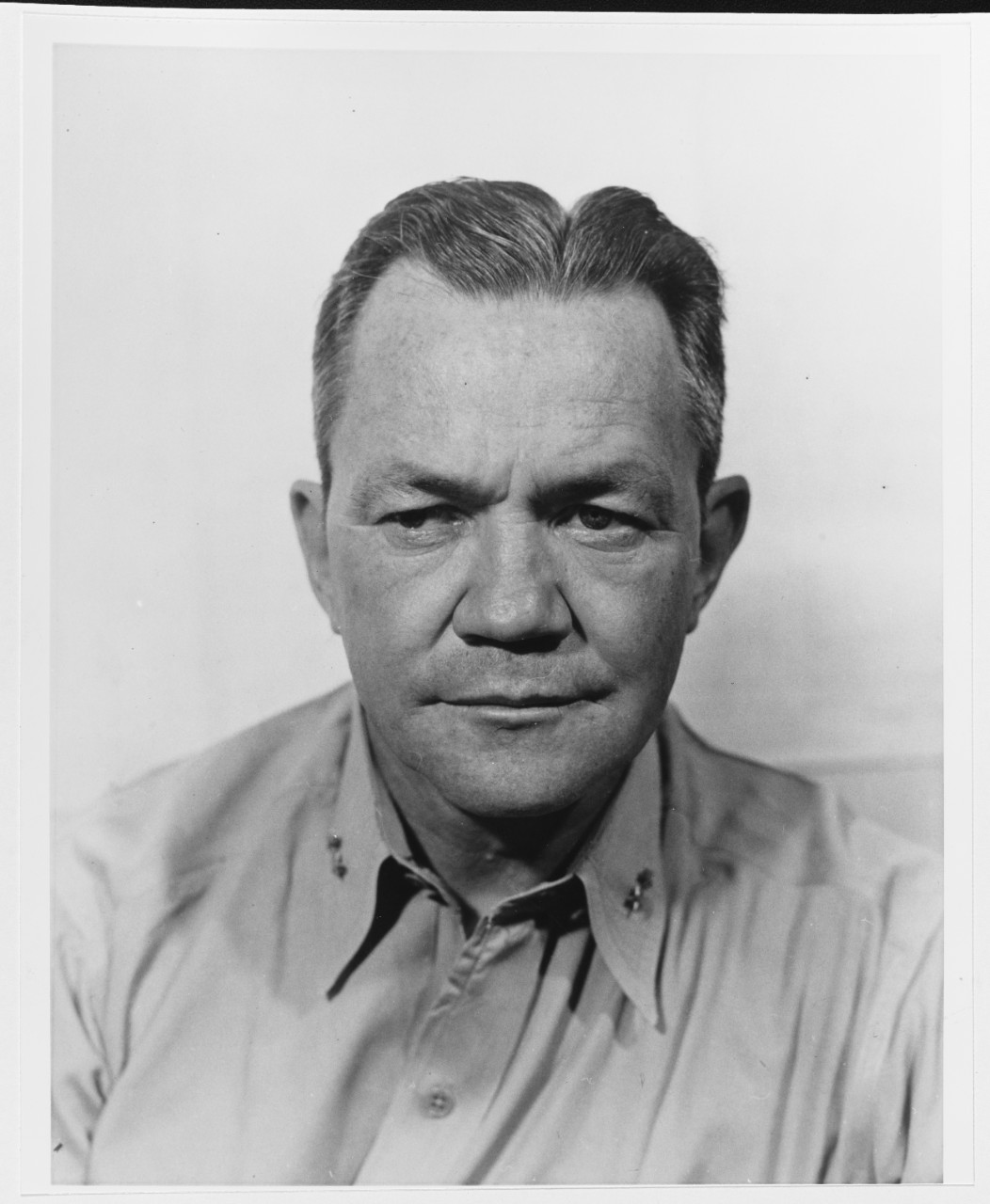 Gerald Francis Bogan was born in Mackinac Island, Michigan, on July 27, 1894, son of James H. and Katherine Nash Bogan. He attended Lane Technical High School in Chicago before his appointment to the Naval Academy, Annapolis, Maryland, which he entered from the Ninth District of Illinois, on June 15, 1912. While a Midshipman he played class football and participated in boxing, and won his letter as a member of Crew. Graduated and commissioned Ensign on June 3, 1916, he received temporary promotion to Lieutenant, both grades, during World War I, and subsequently advanced to the rank of Rear Admiral to date from December 7, 1942. On December 28, 1945, he was appointed Vice Admiral, to date from February 2, 1946, and was transferred to the Retired List of the US Navy in that rank on February 1, 1950.

After graduation from the Naval Academy in June 1916, he was assigned to USS Vermont. The following October he reported for duty as Instructor of enlisted men at the Naval Training  Station, Great Lakes. Detached in March 1917, shortly prior to the United States' entry into World War I, he joined USS Birmingham, in which he served as Watch and Gunnery Officer while that cruiser was employed on escort of convoy duty in European waters throughout the war period.

In January 1919, after the Armistice, he was transferred to USS Stribling, operating in Mediterranean and Adriatic waters and a year later he joined USS Hopewell to serve until May

1920 as Engineer Officer and later Executive Officer. He served next as Executive Officer of USS Broome, operating in the European and Asiatic areas, and in January 1922 became Commanding Officer of the US Naval Radio Station, Russian Island, Vladivostok, Siberia. He returned that station to the Soviet forces after its decommissioning.

Returning to the Naval Academy in March 1923, he served as an instructor in the Department of Electrical Engineering and Physics until May 1924 when he was ordered to the Naval Training  Station, Naval Operating Base, Hampton Roads, Virginia. After brief duty there he reported in August to the Naval Air Station, Pensacola, Florida, where he had flight training and was designated Naval Aviator on March 16, 1925. He then was ordered to Honolulu, TH, to join Fighting Squadron ONE, based on the aircraft carrier Langley, and served for a year as Executive Officer of that squadron, and in command from September 1926 until July 1928.

For two years he served as Commanding Officer of Squadron ONE and Wing Commander of Landplanes at the Naval Air Station, Pensacola, Florida, and from June 1930 until July 1931 commanded Fighting Squadron 3, based on USS Lexington, later USS Langley. That squadron won the aircraft efficiency award for excellence in bombing and gunnery with an annual merit 50% higher than the second place squadron. He next served as Commander Fighting Squadron ONE, of USS Saratoga, and in June 1932 was detached for shore duty as Flight Test Officer at the Naval Air Station, Anacostia, DC. In June 1934 he rejoined the Lexington, in which he served as Assistant Air Officer until June 1935, and as Air Officer for a year thereafter.

He again had a tour of duty at the Pensacola Naval Air Station, this time as Superintendent of Aviation Training until May 1937, and as Executive Officer until June 1938. He then joined USS Yorktown, in which he served for a year each as Navigator and Executive Officer. In August 1940 he reported for duty in connection with the establishment of the Naval Air  Station at Miami, Florida, and commanded that station from its commissioning through the early months of World War II until October 1942.

He then took command of the USS Saratoga, which had been damaged in August 1942 and returned to Pearl Harbor for repairs. That carrier operated in the South Pacific in support of Guadal­canal capture and extension of advance bases in the Solomon Islands. Detached on June 15, 1943, he then served until October 10, as Commander Naval Air, TENTH Fleet, under Admiral Ernest J. King, USN. The TENTH Fleet had no ships of its own but drew on air and surface forces of the Atlantic Fleet to combat the submarine menace. On October 14, 1943, he was designated Commander Fleet Air, Norfolk, Virginia, and on January 18, 1944, became Commander Carrier Division 25. Four months later he was transferred to command of Carrier Division 11, and on February 5, 1945, was again transferred to command of Carrier Division 4. Following the Saipan operation, he became Commander Task Group 38.2 and served as a Task Group Commander in Task Force 58/38 until the end of the war.

Legion of Merit: "For exceptionally meritorious conduct...as Commander of a Carrier Air Support Group engaged in operations for the capture of the Japanese-held Southern Marianas Islands during the period 14 June to 1 August 1944. By his understanding initiative, and outstanding ability, he conducted well-coordinated bombing and strafing missions, anti-submarine and combat air patrols in support of the amphibious landings in this theatre. His escort carriers were well organized and excellently handled their many aggressive missions contributed materially to the success of the operations..."

Navy Cross: "For extraordinary heroism as Commander Task Group 38.2, during operations against enemy Japanese forces, November 25, 1944. When all the carriers under his command were damaged by enemy aerial attack, including two bomb hits on his own Flagship, Rear Admiral Bogan continued to fight his forces so vigorously that eight enemy aircraft were shot down by his ship's gunfire, and the remaining enemy aircraft driven away. By his courage and leadership, he contributed directly to the success of our forces in this area..."

Distinguished Service Medal: "For exceptionally meritorious service to the Government in a duty of great responsibility while serving as Commander of a Task Group assigned to duty with the  Second Carrier Task Force, Pacific Fleet, from 30 October 1944 to 25 January 1945. Under his direction his Task Group completed highly successful operations against enemy aircraft, shipping and land installations in the Philippine Islands, Formosa, the Nansei Shoto Islands and the Coast of Indo-China. His ability to organize, direct and inspire the forces under his command to their maximum effort resulted in devastating damage being inflicted on the enemy..."

Gold Star in lieu of Second Distinguished Service Medal: "...As Commander Task Group 38.3, from July 1 to September 2, 1945...Rear Admiral Bogan pressed home devastating attacks on the home land of Japan in coordination with other task groups, directing destructive strikes against aircraft and supporting industries, installations and transportation facilities and concentrations of naval vessels at Yokosuka, Kure and Kobe. Under repeated aerial attacks delivered by the desperate Japanese, he maintained a high standard of fighting efficiency in all his gallant ships and employed brilliant defensive tactics in repulsing the fanatic enemy. (His) fearless leadership and his expert tactical control of the carriers, battleships, cruisers  and destroyers in Task Group 38.3 were vital factors in the infliction of extensive damage on the enemy and in the completion of hazardous missions Without damage to his own ships..."

In September 1945, following the capitulation of the Japanese the preceding August, Admiral Bogan returned to the United States and in October assumed command of Fleet Air, Alameda (California). On February 2, 1946 he became Commander Air Force, Atlantic Fleet, With the accompanying rank of Vice Admiral. Orders of July 1948 relieved him of that command and designated him Commander FIRST Task Fleet. He assumed command on January 8, 1949, and remained in that command until his retirement became effective on February 1, 1950.