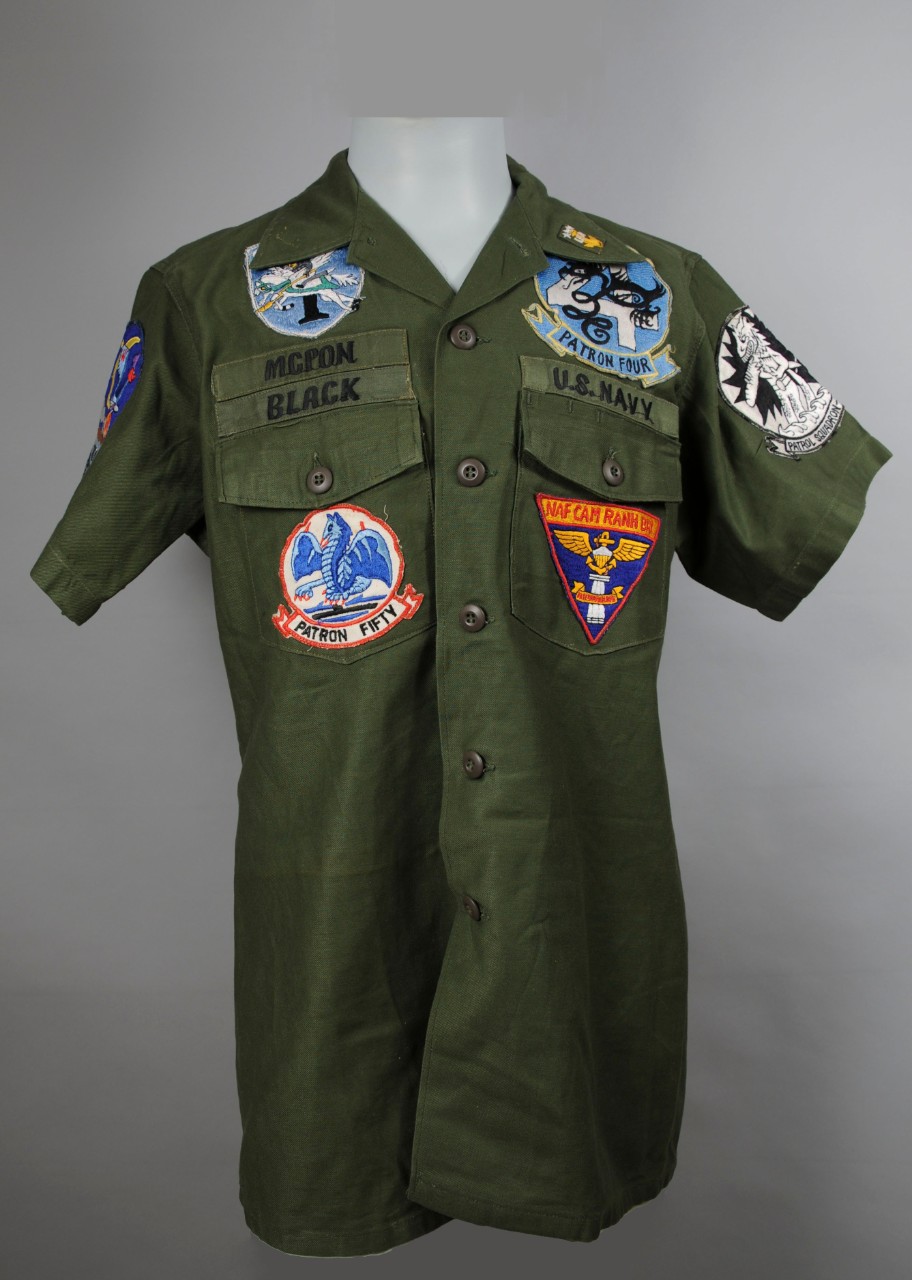 One men’s utility shirt with sewn-on patches. The shirt is olive green in color and made of cotton sateen. The shirt has had the long sleeves truncated to ¾ length. The shirt has five brown plastic buttons down the front and two chest pockets. Above the left breast pocket is a nametape embroidered in black “U.S. Navy.” Above the right breast pocket are two nametapes embroidered in black “MCPON” and “Black.” On the left lapel is a fabric MCPON insignia consisting of a gold anchor with three white stars above and USN superimposed on the anchor. Utility uniforms like this were generally worn in the Navy by personnel assigned to shore stations or who spent most of their time ashore, as well as aviation personnel and sailors of the Riverine Force.

NAF Cam Ranh Bay became a base for coastal air patrol operations during the Vietnam War. Many of the units represented by these patches provided support for Operation Market Time.

On the left sleeve is a patch for Patrol Squadron (PATRON) 42. The “Sea Demons” patch is black and white showing a sea monster rising out of the water and breaking a torpedo in half. A banner beneath the patch reads “Patrol Squadron 42.”

On the left breast is a patch for PATRON 4. The “Skinny Dragon” patch has a black dragon superimposed over a white 4 on a light blue background. A banner beneath the patch reads “PATRON FOUR.”

One the left pocket is a patch for NAF Cam Ranh Bay. It is an inverted triangular-shape with “NAF Cam Ranh Bay” embroidered in red on a gold background at top with a set of naval aviator wings above a white pedestal on a blue field below.

On the right breast is a patch for the Army’s 1st Radio Research Company. The “Crazy Cats” patch shows a cat carrying a lightning bold, riding a Pegasus, superimposed over a 1 on a blue shield.

One the right pockets is a patch for PATRON 50. The “Blue Dragons” patch shows a blue dragon above a black submarine. Below the image is a banner that reads “Patron Fifty.”

On the right sleeve is a patch for Heavy Attack Squadron (VAH) 21. The “roadrunners” patch shows the cartoon character Roadrunner in motion against a night sky with a crescent moon and two stars in the background. TRIM is embroidered below the Roadrunner. A banner below the image reads “Road Runners."