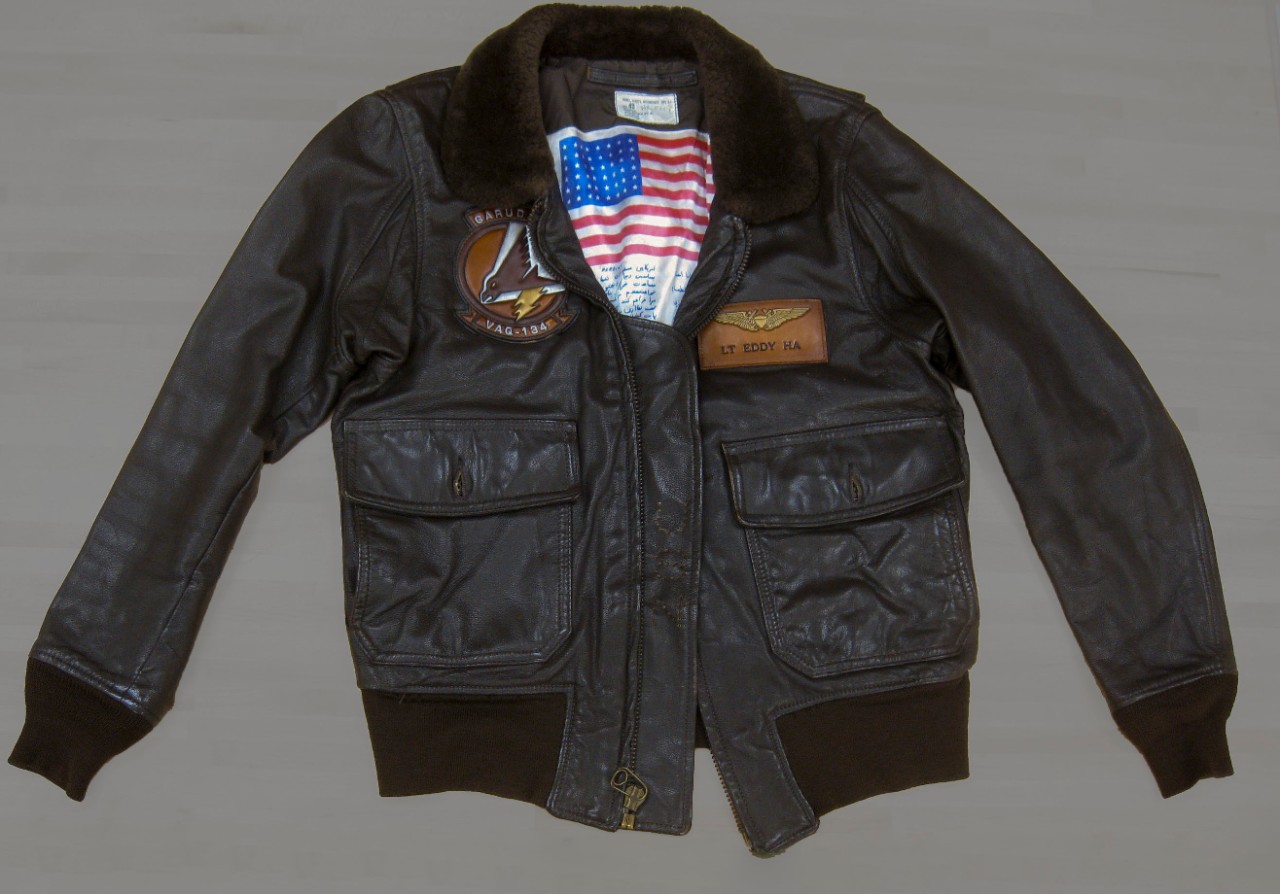 One leather flight jacket with sewn-on leather patches. The patch on the proper left chest is circular-shaped with a tab above “Garudas” and a tab below “VAQ-134.” The center of the patch has a triangular-shaped bird swooping down to attack with a yellow lightning bolt below it. On the proper right chest is a rectangular leather patch displaying naval aviator wings above the name “LT EDDY HA.” Inside the jacket is a blood chit in multiple languages and an American flag. The languages are as follows: Turkish, Italian, Finnish, Serbo-Croatian, French, Swedish, German, Greek Polish, English, Russian, Persian and Arabic. It reads

"I am an American, I do not speak your language. Misfortune forces me to seek your assistance in obtaining food shelter and protection. Please take me to someone who will provide for my safety and see that I am returned to my people. I will do my best to see that no harm comes to you. My government will reward you."

Called the Garudas, electronic attack squadron (VAQ) 134 is a carrier-based aviation squadron established in June 1969 and continues to operate into the 21st century. Their mission is to conduct sustained airborne tactical electronic combat and support US Air Force, Marine, and Navy forces. The name and squadron insignia is based on a bird creature from Hindu mythology. He is often depicted with Vishnu, the Hindu god responsible for preserving and protecting the universe. Garuda carries Vishnu wherever necessary on his mission to protect creation from those evil forces that seek to destroy it. The lightning bolt below the bird represents the lightning bolt lost by the god Indra, god of the heavens and storms, in a fight with Garuda.

The leather jacket is a well-known symbol of naval aviators. The blood chit sewn into the interior of the jacket dates back to the first aviators in World War I and continues in use today. It is printed in multiple languages so it can be read by the locals wherever the aviator is downed. It requests assistance and safe conduct for the aviator to American forces and provides instructions for locals on how to assist.

CDR Eddy Ha graduated from the US Naval Academy in 1994 with a Bachelors degree in Aeronautical Engineering and obtained his Masters degree in National Security and Strategic Studies from the US Naval War College in 2008. During his Navy career, he served as an Electronic Warfare Attack Officer (Electronic Attack Squadron 134), was a test flight officer as part of the Air Test and Evaluation Squadron 23 (VX-23), and was the department head of the EA6B (Electronic Attack Squadron 135). He served as the Chief of Staff for Naval History and Heritage Command from August 2015 until his retirement in June 2018. 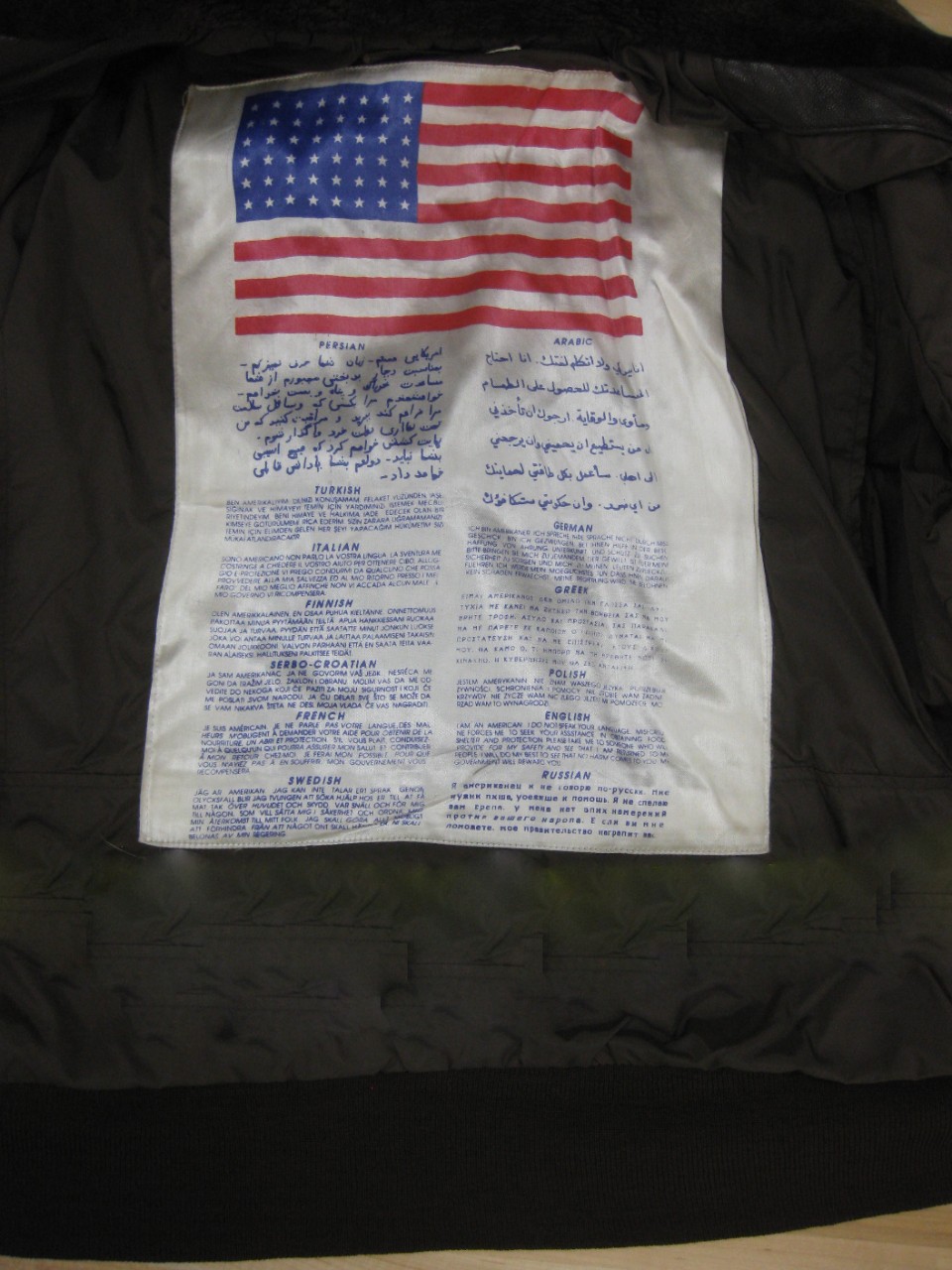 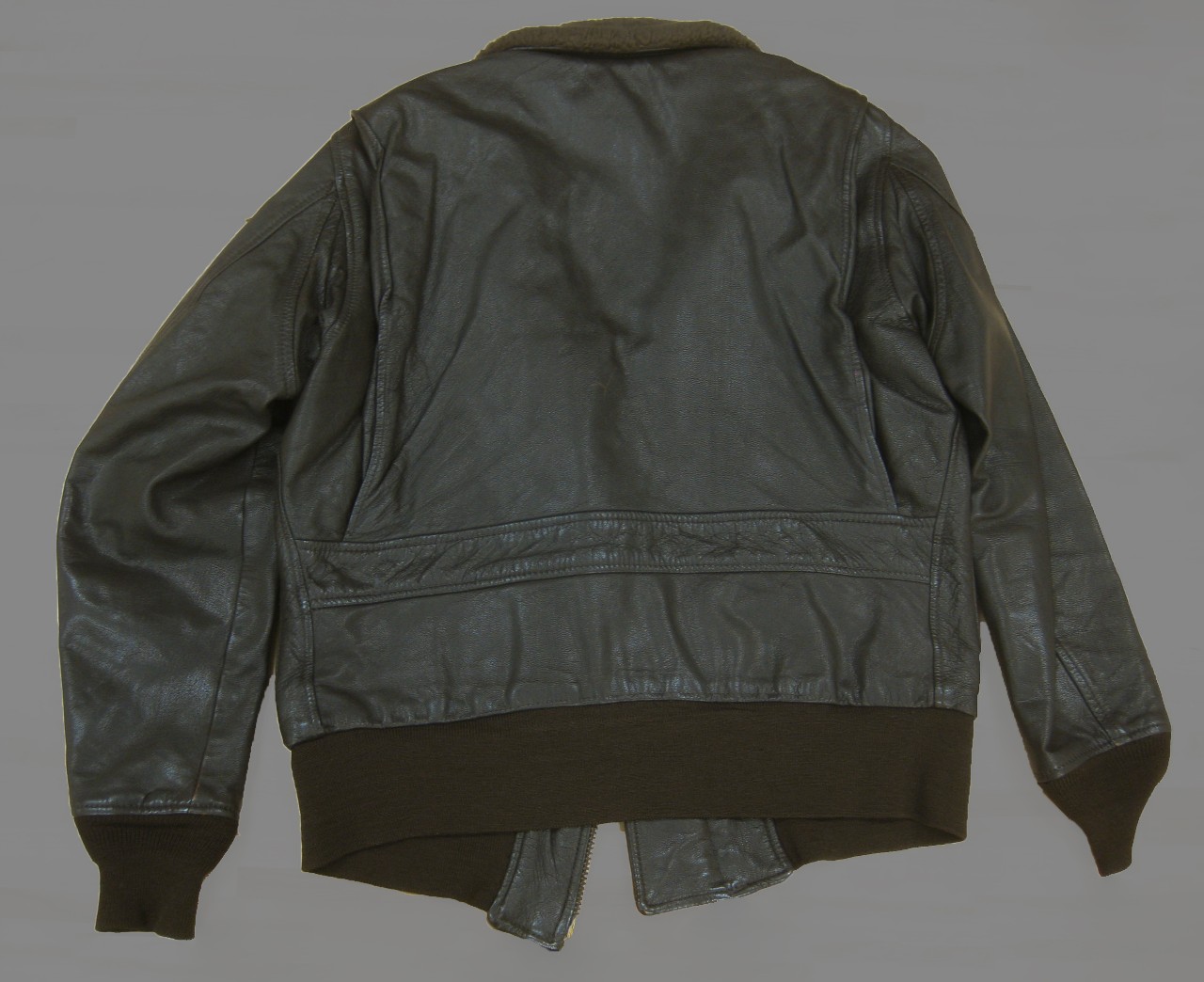