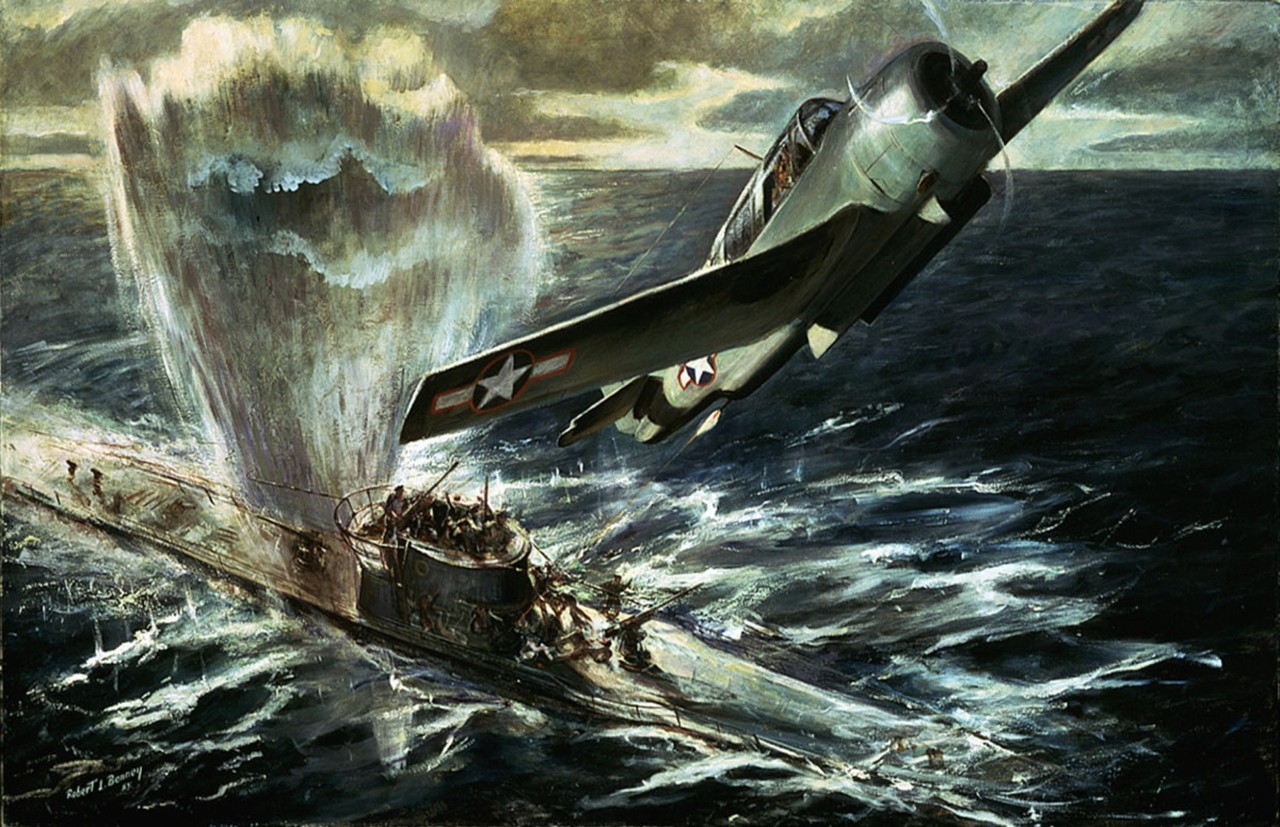 The Kill. In this dramatic presentation of a sea-sky battle, a Grumman Avenger torpedo bomber, bomb bay doors open, leaves death in its wake as it zooms away from a conclusive attack on a surfaced enemy submarine. All the vivid action in this scene has been repeated many times in actual combat by U.S. naval airmen. Naval planes from escort aircraft carriers wreaked havoc on submarine wolf packs attacking Atlantic convoys. Bombers were fitted with depth charges, one of which is pictured exploding off the U-boat's beam here. In the attack, the plane's rear "stinger" gun spits death at gun crews attempting to ward off these lethal hawks from the sky. (Painting, oil on canvas by Robert Benney, 1943, 88-159-AP)

The fleet faced the supreme test of war only 30 years after acquiring its first airplane and just 19 years after commissioning its first aircraft carrier. Naval aviation carried the fight to the enemy and became the backbone of fleet striking power. After the Japanese attack at Pearl Harbor, the handful of carriers in the Pacific filled the ensuing void and demonstrated the potency and flexibility of naval airpower. Although the geographic position of the United States provided the strategic advantage of the ability to move ships between the Atlantic and Pacific fleets via the Panama Canal, it also placed the nation squarely between two fronts with few commonalities.

Air operations in the Atlantic consisted of a blockade and campaign to protect convoys of ships that delivered raw materials, munitions, and reinforcements to the Allies. The convoys’ safe arrivals enabled a series of amphibious operations that helped liberate the European continent from Axis hegemony.

In the Pacific, Allied strategy focused first on stopping Japan’s alarmingly rapid advance and then on the bitterly contested task of driving the enemy forces back over a broad expanse. The United States entered World War II unprepared to execute either strategy — Atlantic or Pacific. The Navy and Marine Corps air arms mustered only one small and seven large aircraft carriers, five patrol wings, and two Marine aircraft wings, about 5,900 pilots and 21,678 enlisted men, 5,233 aircraft of all types, including trainers, and a few advanced air bases.

Distance from the enemy and tremendous industrial power, however, enabled the United States to build the ships, planes, and equipment necessary for victory. American armed forces drove the Axis from strategically located bases, cut off its raw materials, and placed the Allies in position to launch the final air and amphibious offensives. These late efforts were rendered unnecessary by the destructive power of the atom unleashed upon the Japanese cities of Hiroshima and Nagasaki, but the fleet’s liberation of Japanese-held islands in the central Pacific made the atomic attacks possible.

For the first time in naval history opponents engaged out of sight of each other. Radar gave the fleet new eyes, as technological progress improved the defense and added power to the offense. Scientists developed specialized equipment and applied scientific principles to operational tactics. Logistics assumed new importance, and advances in replenishment at sea increased naval mobility.

Over the course of the war, Navy and Marine pilots alone claimed the destruction of more than 15,000 enemy aircraft, sank 174 Japanese warships, destroyed 447 Japanese merchant ships, and sank 63 U-boats in the Atlantic.

Although World War II contributed significantly to the development of aviation, experience proved wrong some prewar theories on the role of airpower to naval operations. By the test of war it became exceedingly clear that neither armies nor navies could achieve objectives in war without first achieving air superiority, and that neither could exert as much force alone as with the aid of air striking power. 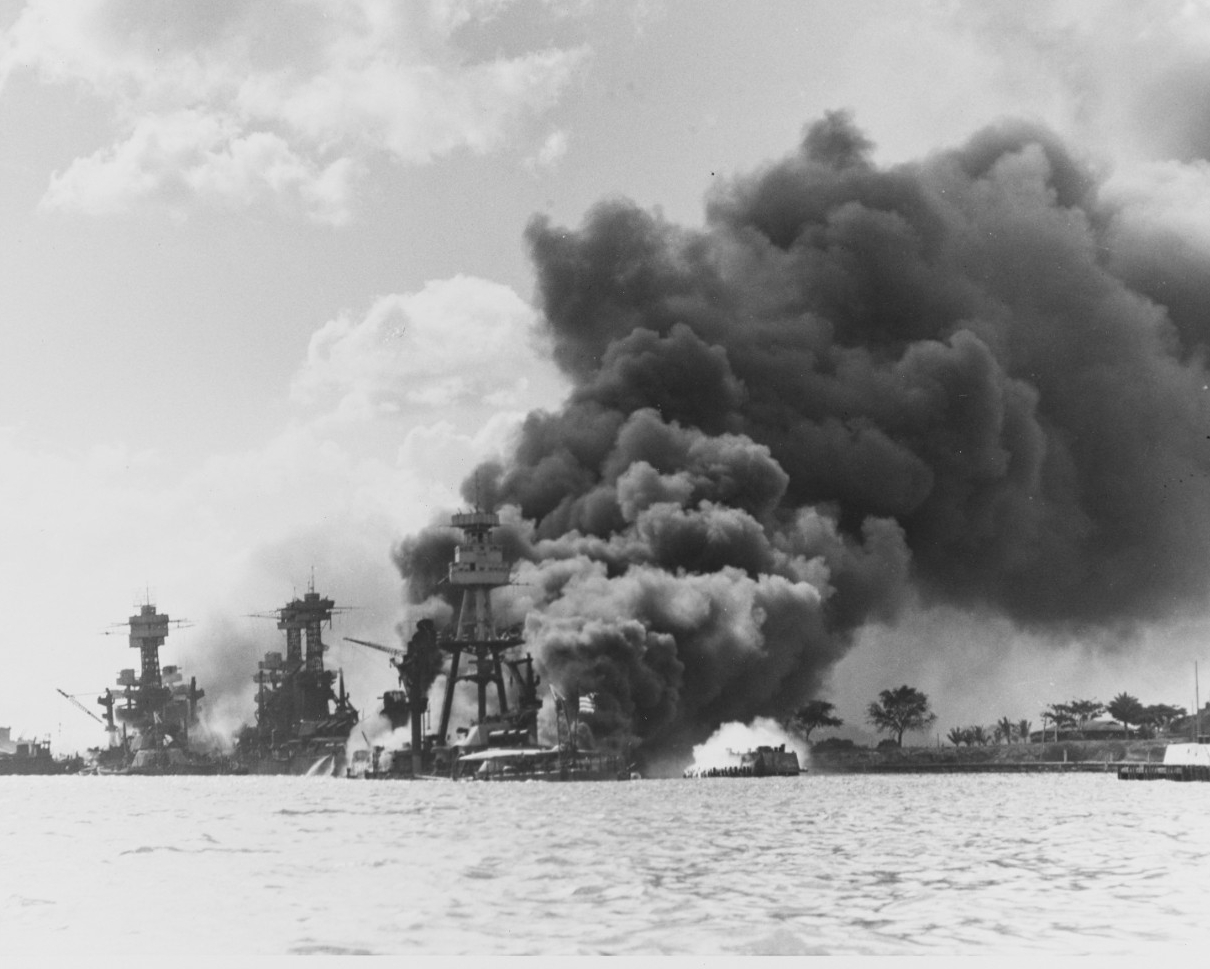 10 December 1941—An SBD-3 Dauntless of VS-6, embarked on board Enterprise (CV-6), sank Japanese fleet submarine I-70 north of the Hawaiian Islands. The first Japanese warship sunk by U.S. aircraft during World War II, I-70, had scouted the Hawaiian area during the attack on Oahu.

18 April 1942—The Doolittle Raid began with 16 Army Air Force B-25 bombers launching earlier than expected from USS Hornet (CV-8), approximately 650 miles off Japan, after having been spotted by enemy ships. It was the first attack by the United States of the Japanese mainland since Pearl Harbor. Most of the 16 B-25s, each with a five-man crew, then attacked the Tokyo area, with a few hitting Nagoya. All the B-25B Mitchells were lost — 15 crashed in China and one was interned at Vladivostok in the Soviet Union. 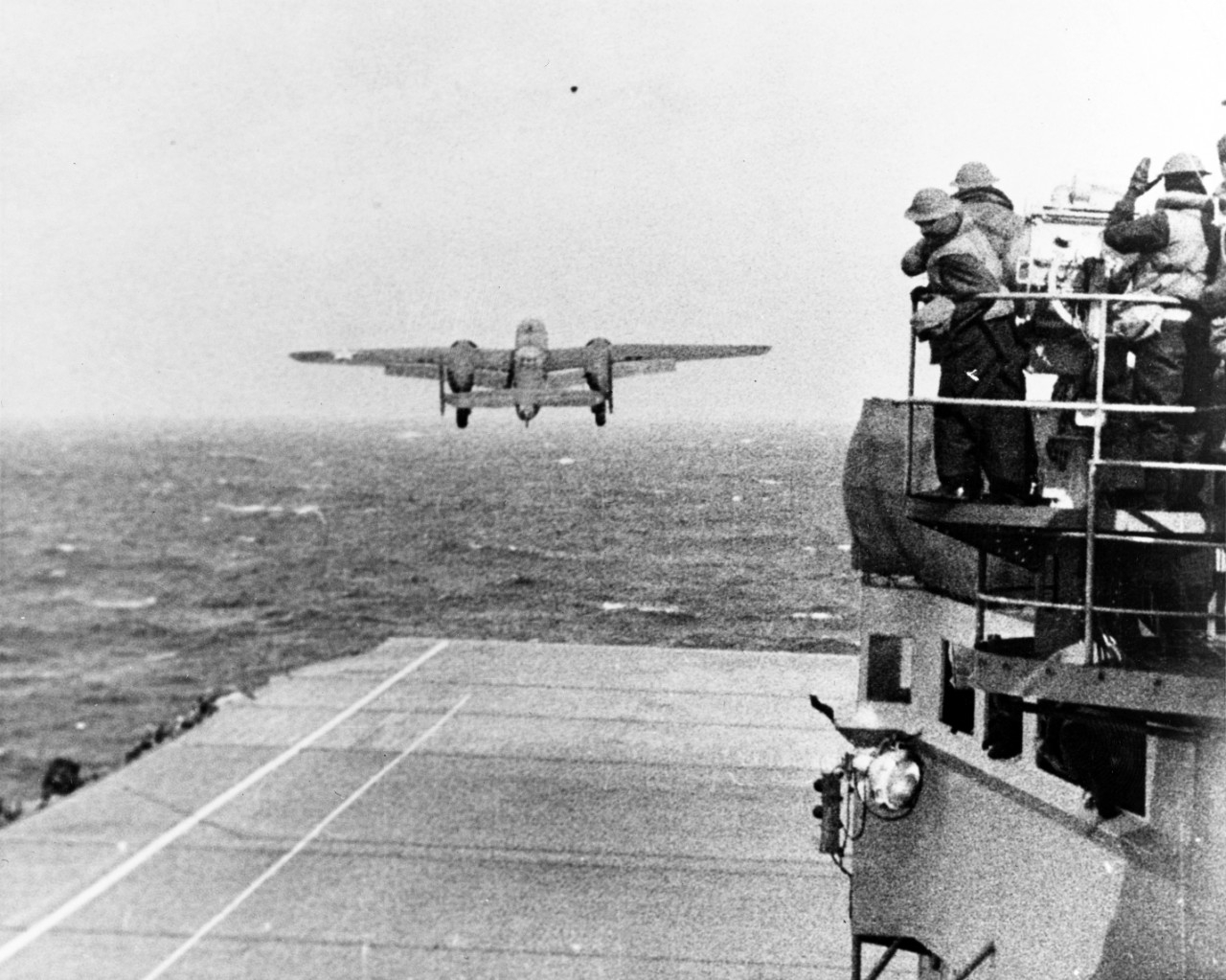 Doolittle Raid on Japan, April 1942. An Army Air Force B-25B bomber takes off from Hornet (CV-8) at the start of the raid, 18 April 1942. Note the men watching from the signal lamp platform at right. (Official U.S. Navy photograph, now in the collections of the National Archives, 80-G-41196)

4 May 1942—The Battle of the Coral Sea was the first time since the Japanese attack on Pearl Harbor that the enemy’s seemingly relentless advance into the Pacific was checked. It was also the first major U.S. Navy fleet action against Japan and the first naval engagement in history in which the participating ships never sighted or fired directly at each other.

3 June 1942—The Battle of Midway was fought 3–7 June at and near the island of Midway in the central Pacific Ocean. The United States took the offensive in the Pacific after this victory over the Japanese Imperial Navy. After Midway, the tide of the war turned in favor of the United States and the Allies. 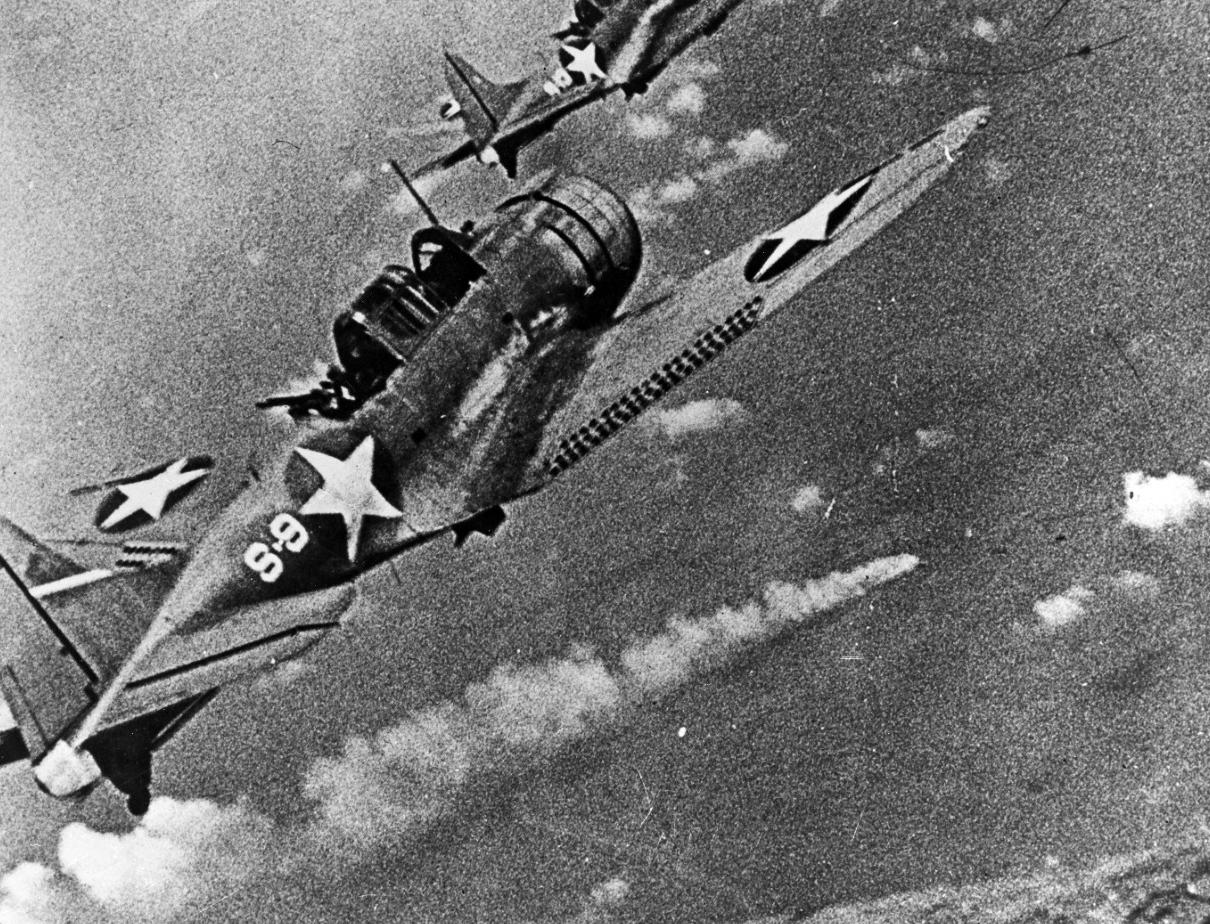 Battle of Midway, June 1942. SBD Dauntless dive bombers from Hornet (CV-8) approaching the burning Japanese heavy cruiser Mikuma to make the third set of attacks on her, during the early afternoon of 6 June 1942. Mikuma had been hit earlier by strikes from Hornet and Enterprise (CV-6), leaving her dead in the water and fatally damaged. Photo was enlarged from a 16mm color motion picture film. Note the bombs hung beneath these planes. (Official U.S. Navy Photograph, now in the collections of the National Archives, 80-G-17054)

12 November 1942—The Naval Battle of Guadalcanal began with Japanese air attacks on U.S. ships bringing reinforcements to the embattled island. Over the next four days, Japan lost the battleships Hiei and Kirishima, heavy cruiser Kinugasa, three destroyers, and many valuable transports. Two U.S. light cruisers, Atlanta and Juneau, and seven destroyers were sunk. Japan’s losses weakened its ability to strengthen its garrison on Guadalcanal, enabling the United States to shift from the defensive to the offensive in this campaign.

20 March 1943—Maj. John W. Sapp, USMC, of VMTB-143, led 42 Navy and Marine TBF-1 Avengers on a night flight from Guadalcanal’s Henderson Field, in the Solomon Islands, to mine Kahili Harbor, Bougainville. A coordinated attack on the Kahili airfield by USAAF heavy bombers contributed to the success of this first aerial mining mission in the South Pacific.

17 December 1943—Commander Aircraft, Solomons, dispatched a fighter sweep of Navy, Marine, and New Zealand planes led by Maj. Gregory Boyington, USMC, against the Japanese naval fortress at Rabaul on New Britain. Boyington subsequently received the Medal of Honor for shooting down 26 Japanese aircraft during the war. Intensive follow-up attacks through February 1944 assisted in the establishment of Allied bases that encircled the stronghold. The Allies bypassed the Japanese garrison at Rabaul but continually subjected the fortress to aerial attacks. On 9 August 1945, Marine PBJ-1 Mitchells launched the final strike.

22 January 1944—Operation Shingle, the Allied landing at Anzio and Nettuno, Italy, began. By May, the Allies broke out of the beachhead, linked up with troops that pierced German defensive lines inland, and on 4 June liberated Rome.

29 January 1944—Task Force 58 attacked the Japanese garrisons of Kwajalein, Maloelap, and Wotje during Operation Flintlock, the occupation of the Marshal Islands. Land-based planes of Task Force 57 also supported the landings. These raids destroyed Japanese air strength on the islands. 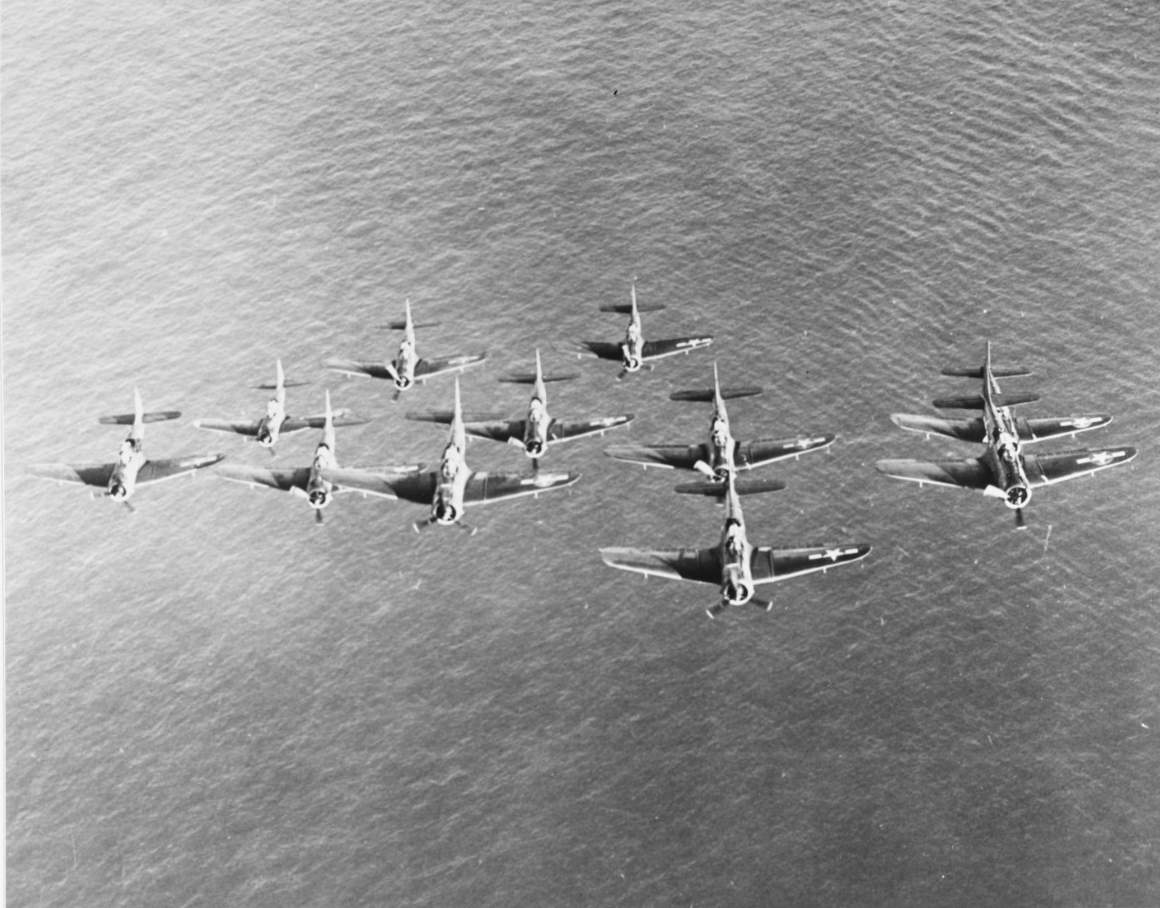 6 June 1944—Seventeen naval aviators from aviation detachments on board battleships and cruisers served in bombardment duty with VCS-7 during Operation Overlord, the Allied landings in German-occupied Normandy, France. From D-Day through 26 June, the squadron operated with the British Fleet Air Army and Royal Air Force, flying gunfire-spotting missions in Supermarine Spitfires over the Normandy beaches.

14 August 1945 (15 August in the Western Pacific)—Japan accepted the terms of unconditional surrender and the Allies celebrated V-J (Victory in Japan) Day. On 27 August, ships of the Third Fleet, Adm. William F. Halsey Jr. commanding, steamed into Sagami Wan outside the entrance to Tokyo Bay, Japan. Aircraft carriers launched reconnaissance missions over the Japanese homeland from outside the bay. On 2 September, the Japanese formally surrendered on board battleship Missouri (BB-63) in Tokyo Bay. During the final carrier actions of World War II, naval aviation claimed the destruction of 1,223 Japanese aircraft, including more than 1,000 on the ground, and sank 285,000 tons of shipping. 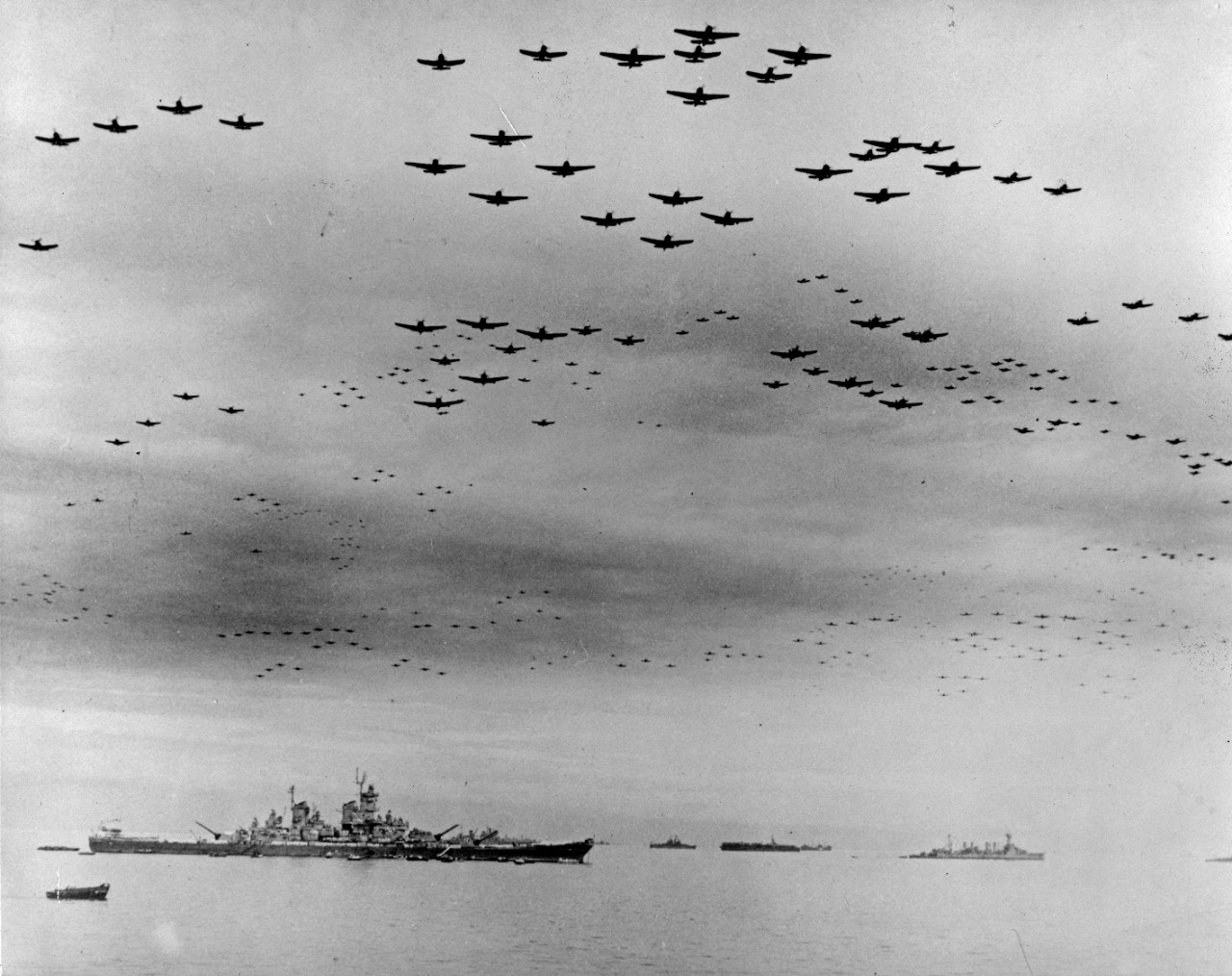 Surrender of Japan, 2 September 1945. Navy carrier planes fly in formation over the U.S. and British fleets in Tokyo Bay during surrender ceremonies. Missouri (BB-63), where the ceremonies took place, is at left. Detroit (CL-8) is in the right distance. Aircraft include TBM, F6F, SB2C and F4U types. (Official U.S. Navy Photograph, now in the collections of the National Archives, 80-G-421130)