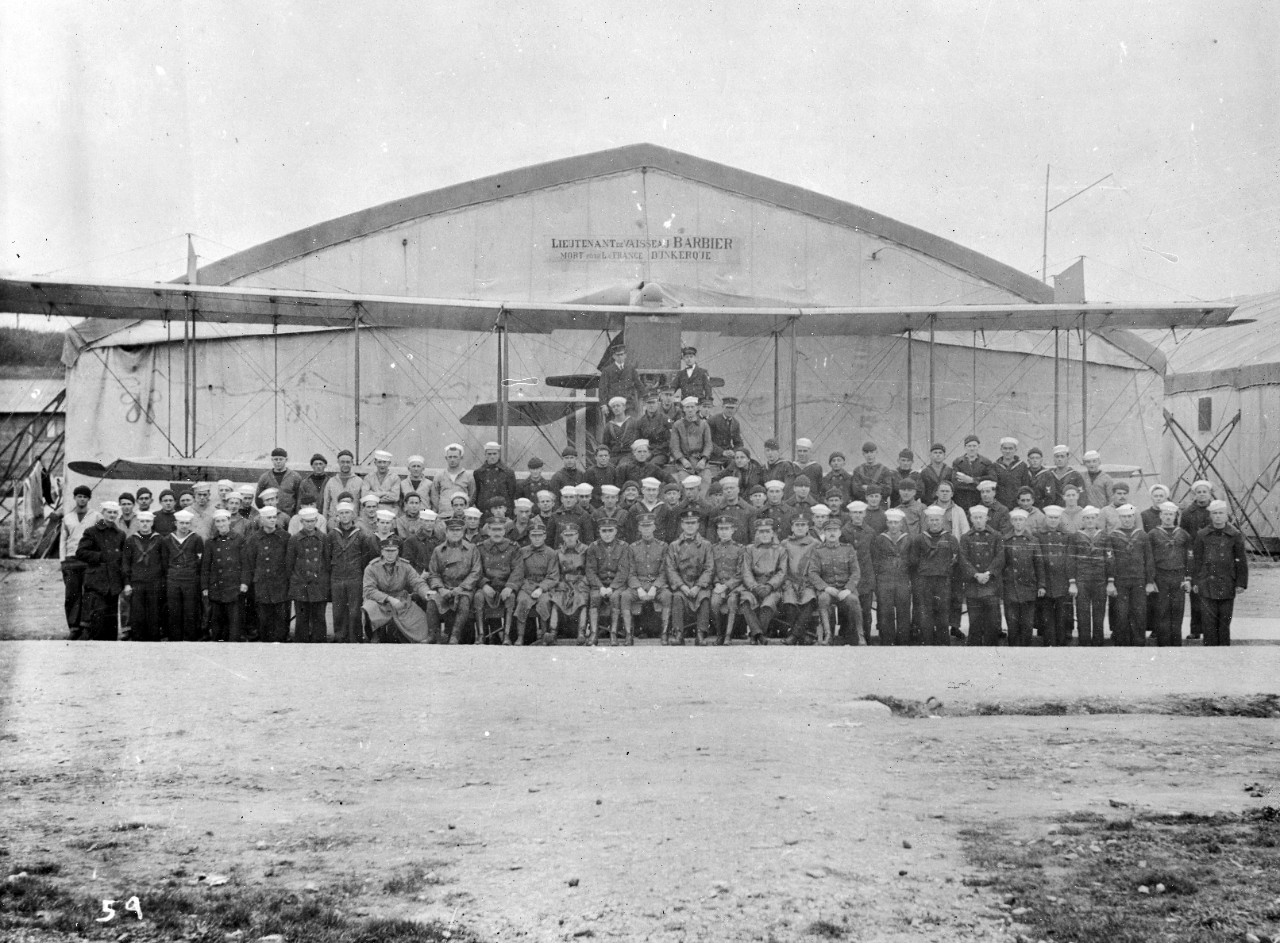 A small group of pioneer Navy and Marine Corps aviators nurtured the early growth of naval aviation, but the program emerged from these early trials too poorly equipped to wage war. When the call came on 6 April 1917, the U.S. Fleet counted only one operating air station, 48 available aviators and students, and 54 aircraft on hand. Naval aviation expanded remarkably during the 19 months between the U.S. declaration of war with Germany and the Armistice. Aircraft of many types entered production, and then produced thousands of aviators, ground officers, mechanics, and technical specialists.

Naval aviation achieved a good wartime record despite the chaos generated by the speed and breadth of its expansion. Naval aircraft flew more than three million nautical miles and attacked and damaged 12 German submarines. By war’s end Navy and Marine Corps squadrons had organized the Northern Bombing Group, which prepared a round-the-clock air campaign that was to have led toward the first strictly American air offensive of the war. When the fighting ended, Navy and Marine Corps aviators were flying from 27 stations in Europe—two in Canada, one in the Panama Canal Zone, one in the Azores islands, and 12 in the United States.

Naval aviation’s outstanding technical product of the war arguably became long-distance flying boats. Just after war’s end, in 1919, the Curtiss NC-type flying boats secured a place in aviation history as the first aircraft to fly across the Atlantic. While flying boats evolved into impressive weapons, and many naval aviators urged the Navy to adopt them as the major means of taking airpower to sea, others argued that aircraft should fly from warships of the fleet, and still others thought lighter-than-air craft were the future of naval aviation. The 1920s witnessed development in all areas. The sentiment in favor of aircraft carriers also gained currency, and in 1919 the Navy decided to convert a collier to a carrier. This decision represented a modest beginning for a program that occupied the attention of a host of shipbuilders, aircraft designers, and naval tacticians for many years to come.

20 April 1917—The Navy’s first airship, DN-1, made its initial flight at Pensacola, Florida. The airship’s performance proved unsatisfactory on several counts, and following two more flights this month the service grounded it and DN-1 did not return to the air.

5 June 1917—The First Aeronautic Detachment, Lt. Kenneth Whiting commanding, arrived on board the collier Jupiter (Fuel Ship No. 3) at Pauillac, France. This marked the deployment of the initial U.S. military command to that country during World War I. When the ship reached a position about 60 miles off the estuary of the Gironde River, lookouts spotted an apparent torpedo pass ahead of the ship and a second wake pass astern, indicating an attack by a German submarine. The detachment comprised 7 officers and 122 enlisted men and included an element on board the collier Neptune (Fuel Ship No. 8) that arrived at St. Nazaire three days later. The entire detachment completed offloading by 10 June. The men from Jupiter originally billeted on board a French receiving ship at Bordeaux, while those from Neptune housed at a French naval air station at Camaret. The French had requested the early deployment of the men to bolster Allied morale. 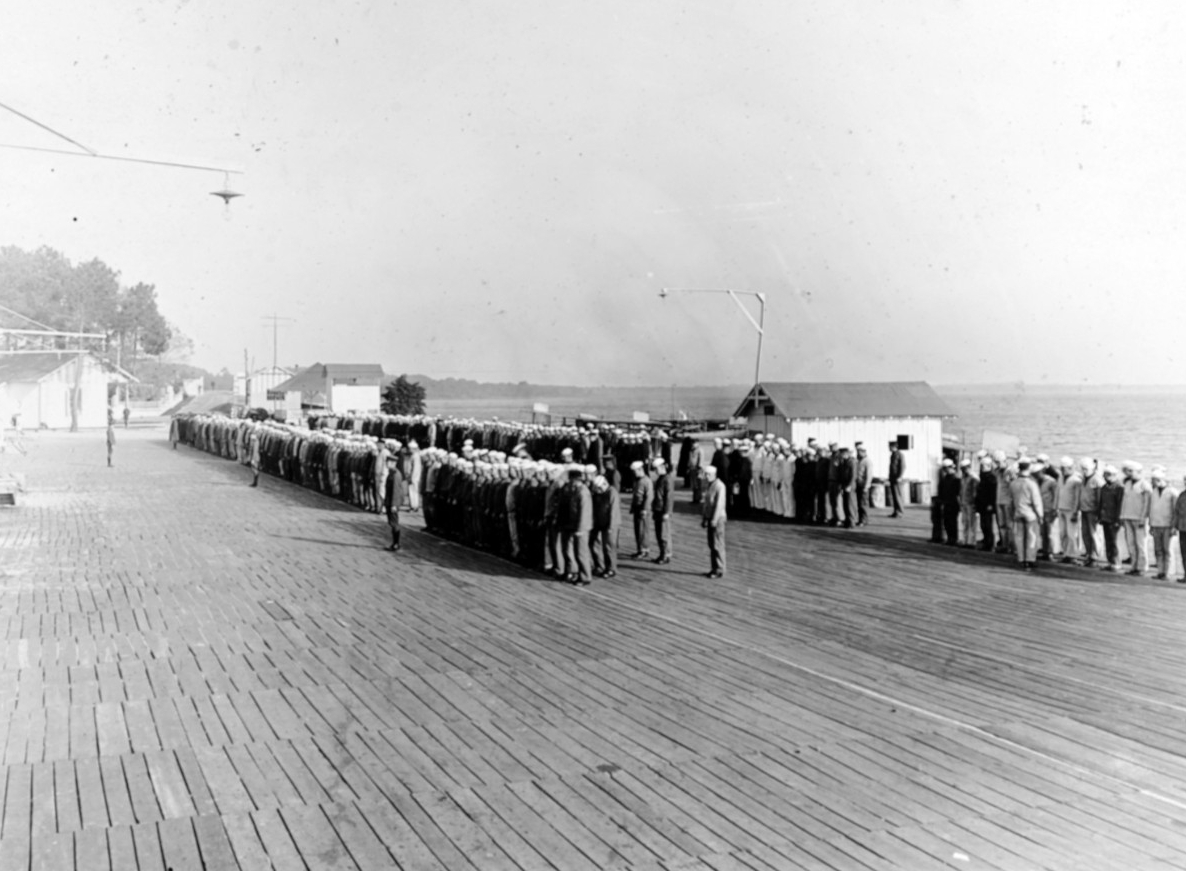 10 November 1917—A Navy “flying bomb” manufactured by the Curtiss Company. arrived for testing at the Sperry Flying Field at Copiague on Long Island, New York. Designers intended the flying bomb (also called an aerial torpedo) for automatic operation carrying 1,000 pounds of explosive, with a range of 50 miles and a top speed of 90 miles per hour. In addition to this specially designed aircraft, N-9s received conversions for automatic operations as flying bombs that closely resembled subsequent guided missiles.

27 March 1918—The first aircraft built at the Naval Aircraft Factory at Philadelphia, Pennsylvania, an H-16, BuNo A-1049, made its first flight. Navy H-16s, equipped with two 230-pound bombs and five Lewis machine guns, conducted antisubmarine patrols from U.S. and European stations during World War I. 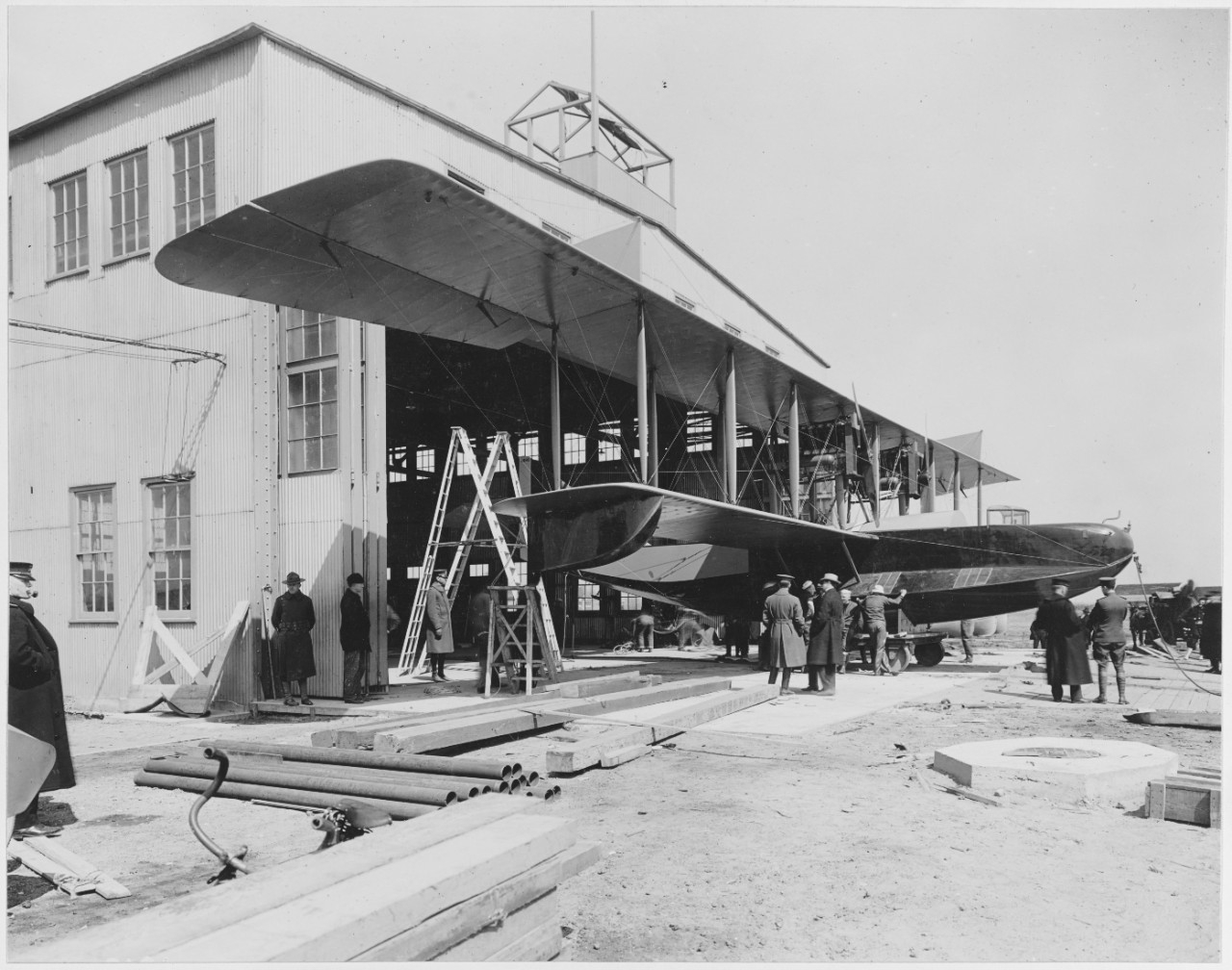 21 August 1918—At 1120 a flight of five Macchi M-5 singleseat fighters and two M-8 two-seat bombers from NAS Porto Corsini, Italy, dropped leaflets on the Austro-Hungarian fortress of Pola on the Adriatic Sea. Enemy guns fired at the incoming aircraft, and five fighters and two seaplanes rose to intercept the Americans, shooting down pilot Ens. George H. Ludlow (Naval Aviator No. 342) in an M-5 three miles from the harbor entrance and damaging a fighter flown by Ens. Charles H. Hammann, USNRF (Naval Aviator No. 1494). Hammann evaded his pursuers, landed alongside the downed pilot, took him on board, and returned to Porto Corsini. Hammann later received the Medal of Honor. The Navy subsequently named two ships after him.

24 September 1918—While on a test flight in a Sopwith Camel, Lt. j.g. David S. Ingalls, USNRF (Naval Aviator No. 85), sighted a German two-seat Rumpler over Nieuport, Belgium. In company with another Camel, Ingalls attacked and scored his fifth aerial victory in six weeks to become the Navy’s first ace. Ingalls also shot down at least one enemy observation balloon while serving with No. 213 Squadron of the British Royal Air Force. For these and other meritorious acts the British awarded Ingalls the Distinguished Flying Cross, and the United States conferred upon him the Distinguished Service Medal. An official British evaluation of Ingalls' service named him “one of the finest men No. 213 Squadron ever had.” 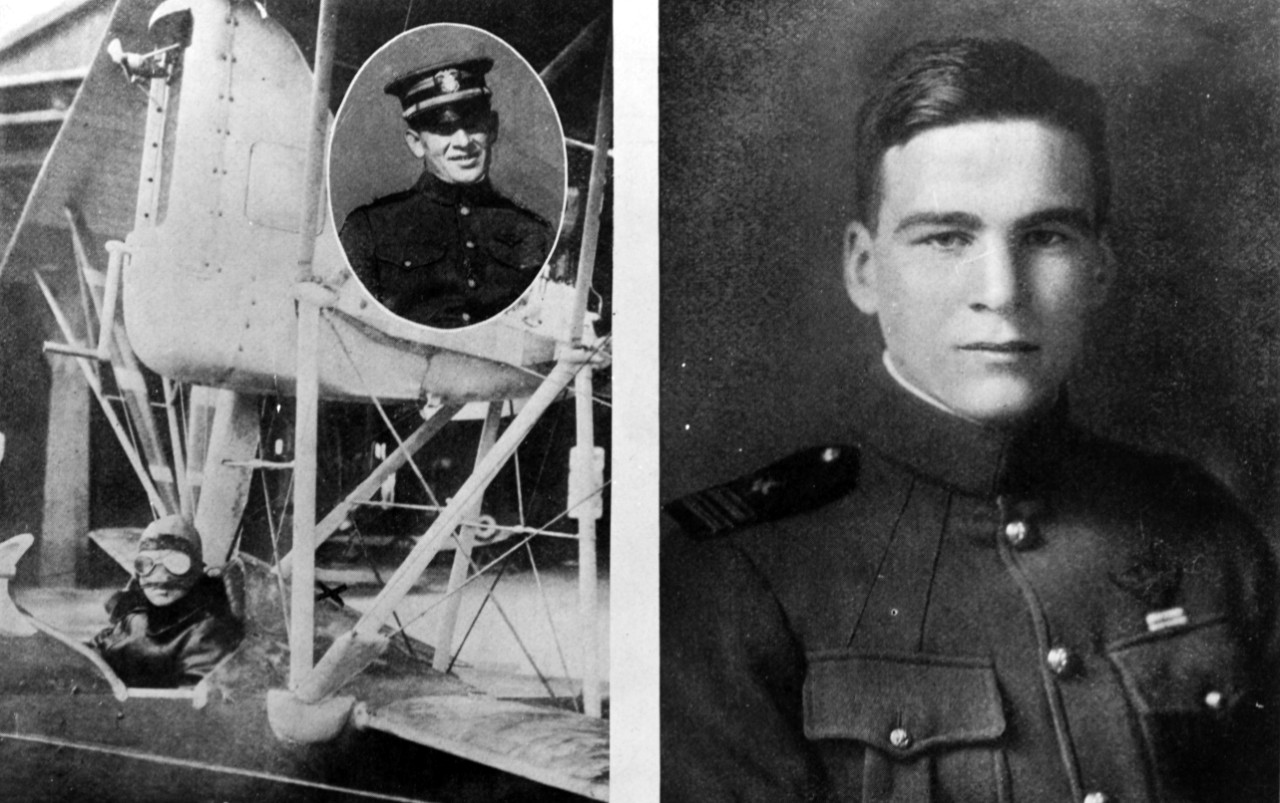 Flyers Whose Exploits Brought Prestige to Naval Aviation halftone photo spread from Our Navy at War by Josephus Daniels, Secretary of the Navy during World War I. It features a portrait photograph of Lt. David S. Ingalls, the U.S. Navy's first aerial ace (right), and a view of Lt. George H. Ludlow seated in an Italian-built Macchi M.5 flying boat (left). Inset is a photograph of Ensign Charles H. Hammann, who was awarded the Medal of Honor for rescuing Ludlow on 21 August 1918. (U.S. Naval History and Heritage Command photograph, NH 49249)

27 November 1918—Flying boat NC-1, BuNo A-2291, established a new world record for the number of people carried in flight by embarking 51 persons during a trip from NAS Rockaway Beach, New York.

9 March 1919—The first flight from a battleship platform is made by Lt. Cmdr. Edward O. McDonnell in a Sopwith Camel from turret No. 2 of USS Texas (BB-35). 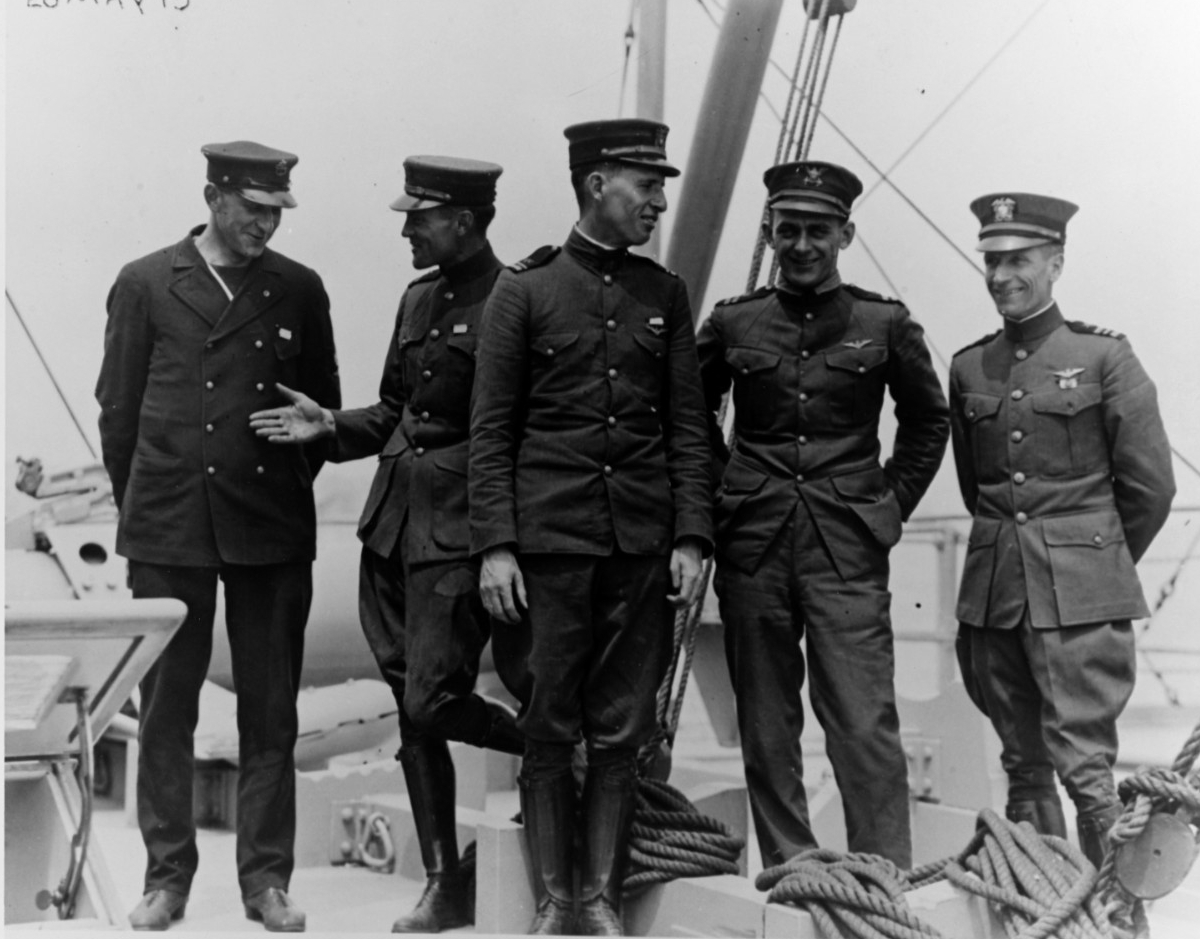 First Flight Across the Atlantic 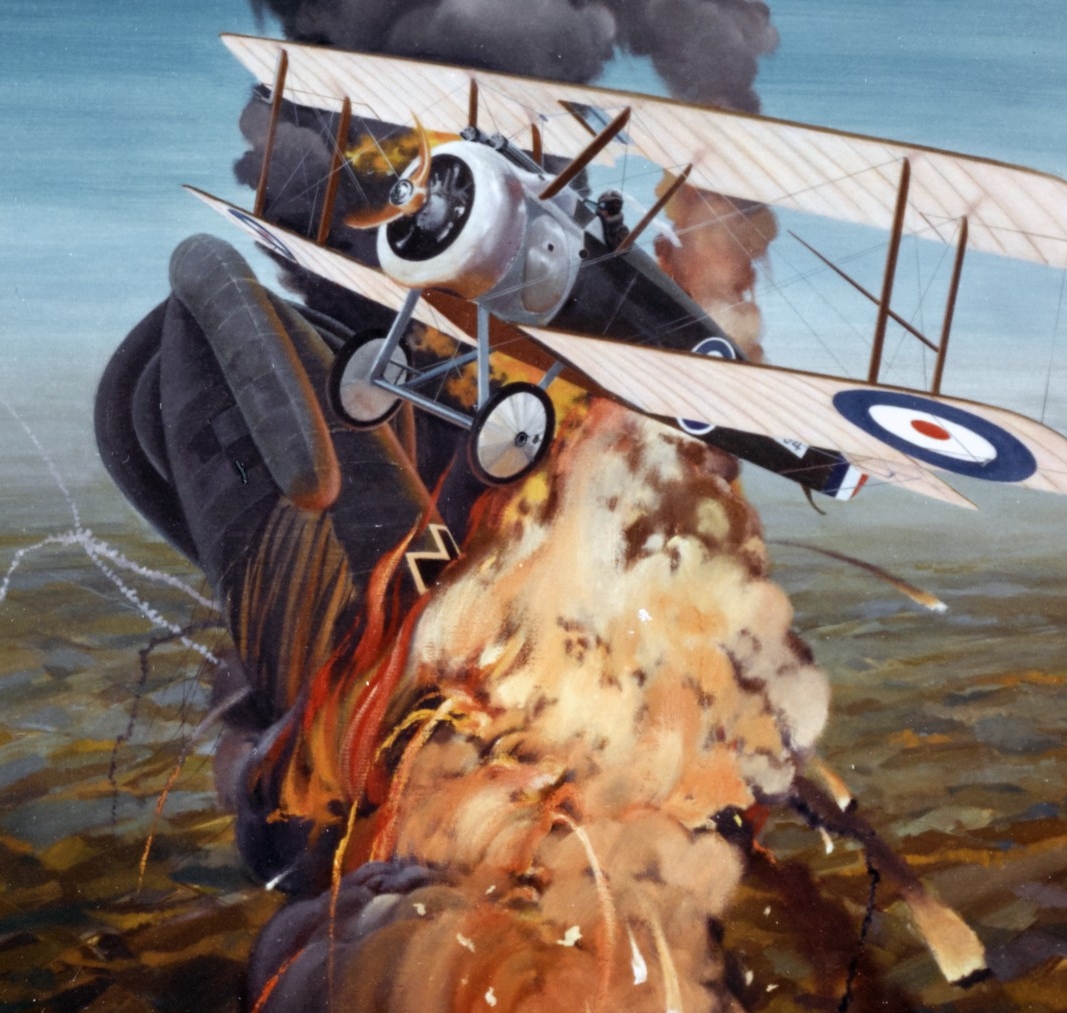 The first U.S. naval air ace during World War I. From 18 July 1918 to 24 September 1918, while flying with Royal Air Force Squadron 213, he shot down four enemy aircraft and an observation balloon. He was awarded the Distinguished Service Cross by the United States, the Distinguished Flying Cross by Britain, and was made a member of the French Legion of Honor. (Courtesy of the Curator for the Department of the Navy, color, NH 77664-KN)