The United States Navy’s official interest in airplanes emerged as early as 1898. That year the Navy assigned officers to sit on an interservice board to investigate the military possibilities of Samuel P. Langley’s flying machine. In subsequent years naval observers attended air meets in the United States and abroad, and public demonstrations staged by Orville and Wilbur Wright in 1908 and 1909. These naval observers became enthusiastic about the potential of airplanes as fleet scouts, and by 1909 many naval officers, including a bureau chief, urged the purchase of aircraft.

The next year, the Navy made a place for aviation in its organizational structure when Capt. Washington I. Chambers was designated as the officer to whom all aviation matters were to be referred. Before the Navy had either planes or pilots, he arranged a series of tests in which civilian aircraft designer Glenn H. Curtiss and Eugene B. Ely, a pilot who worked for Curtiss, dramatized the airplane’s capability for shipboard operations and showed the world and a skeptical fleet that aviation could go to sea. 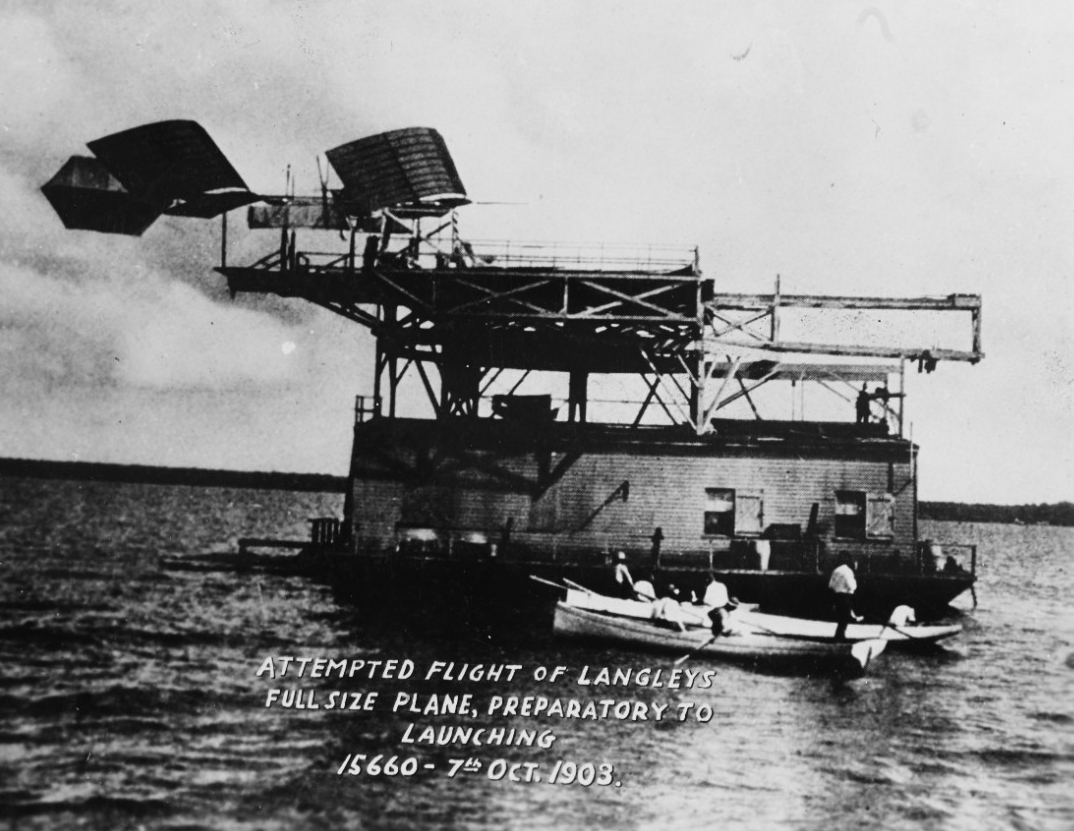 Early in 1911 the first naval officer reported for flight training. By mid-year the Navy appropriated the first money, purchased the first aircraft, qualified the initial pilot, and selected the site of the first aviation camp.

Recognizing the need for science, Capt. Chambers collected the writings and scientific papers of leaders in the new field, pushed for a national aerodynamics laboratory, and encouraged naval constructors to work on aerodynamic and hydrodynamic problems. The Navy built a wind tunnel, and the nation established the National Advisory Committee for Aeronautics. A board under Chambers’ leadership conducted the first real study of what was needed in aviation and included in its recommendations the establishment of a ground and flight training center at Pensacola, Florida, the expansion of research, and the assignment of an airplane to every major combatant ship of the Navy. 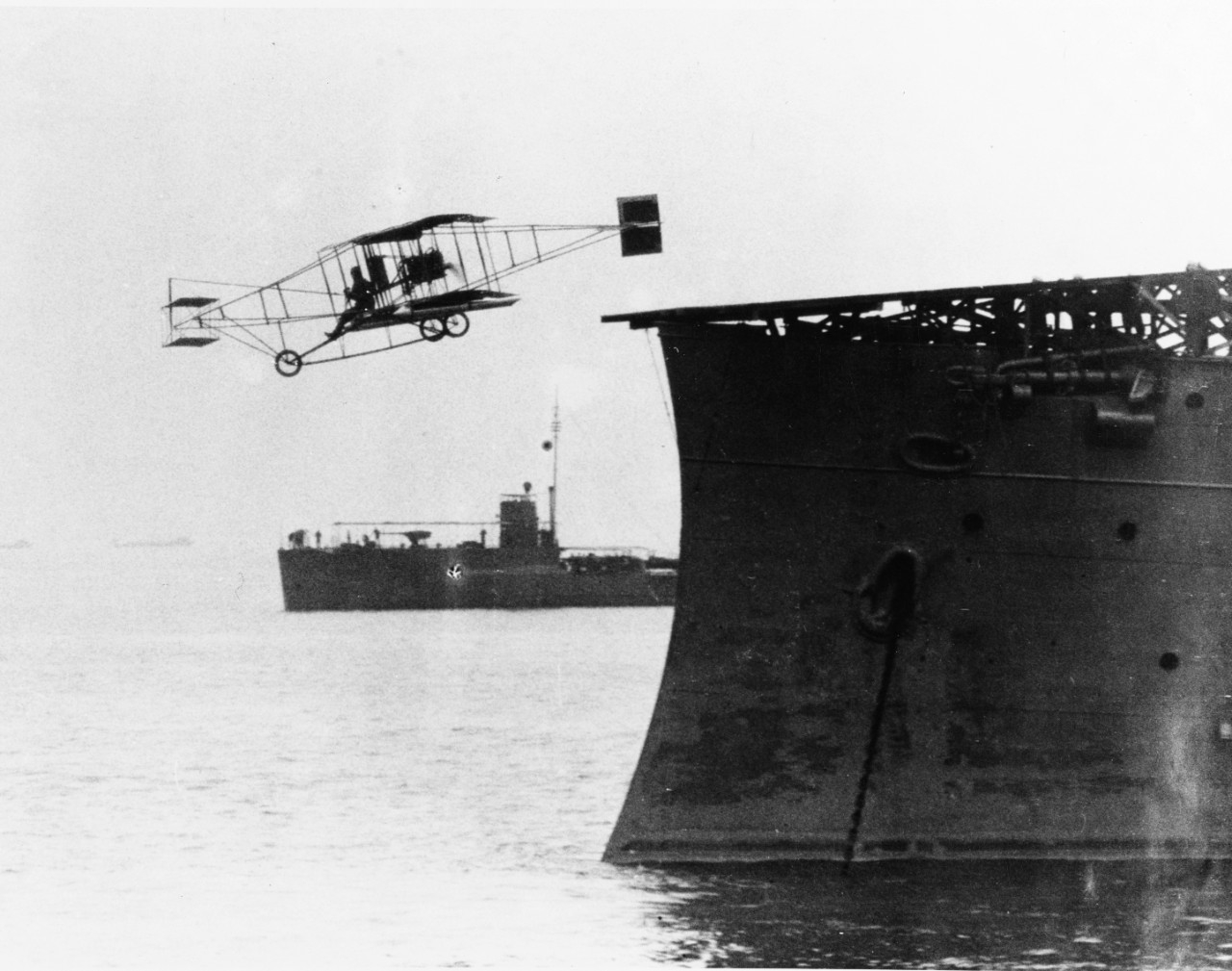 Eugene B. Ely flies his Curtiss pusher airplane from USS Birmingham (Scout Cruiser #2), in Hampton Roads, Virginia, during the afternoon of 14 November 1910. USS Roe (Destroyer #24), serving as plane guard, is visible in the background. (Photograph from the Eugene B. Ely Scrapbook Collection, S-005. Naval History and Heritage Command photograph, NH 77545)

Naval aviation’s progress in these early years included setting an endurance record of six hours in the air; the first successful catapult launch of an airplane from a ship; exercises with the fleet during winter maneuvers at Naval Station Guantánamo Bay, Cuba; and combat sorties at Vera Cruz, Mexico. In 1914 Secretary of the Navy Josephus Daniels announced that the Navy had reached the point “where aircraft must form a large part of our naval forces for offensive and defensive operations.” 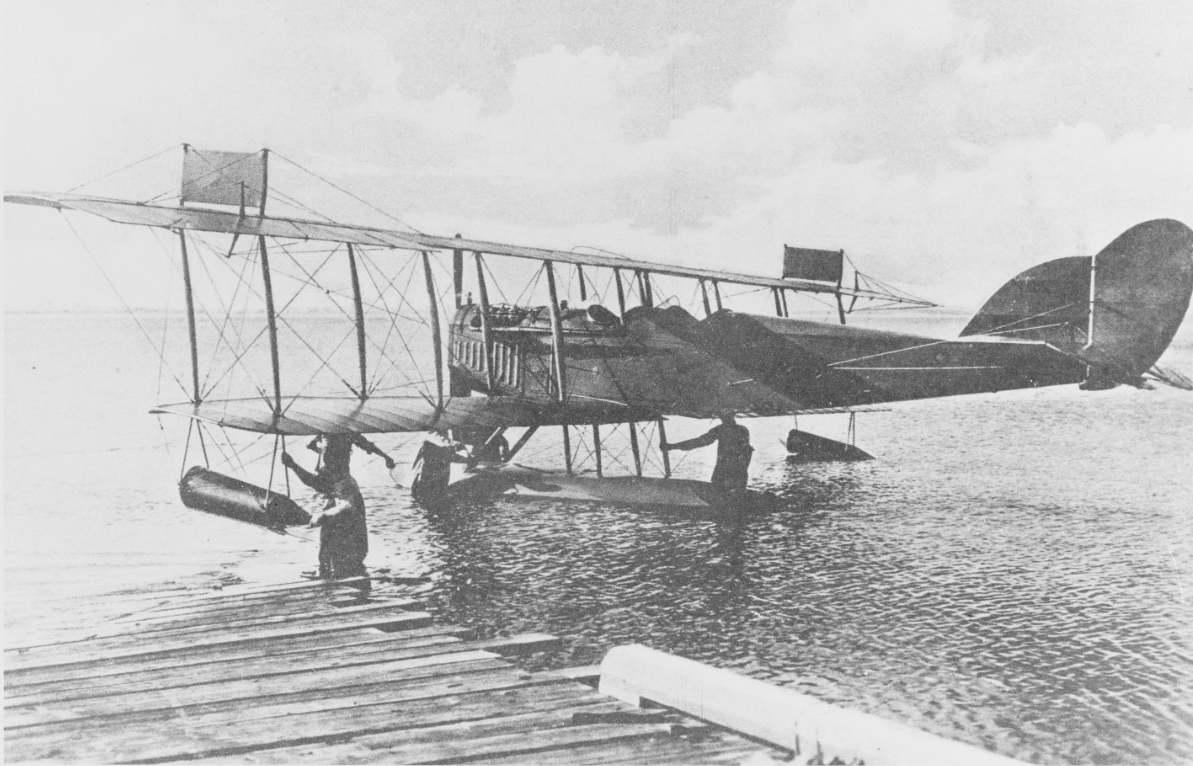 25 March 1898—Assistant Secretary of the Navy Theodore Roosevelt recommended to Secretary of the Navy John D. Long that he appoint two officers “of scientific attainments and practical ability,” who, with representatives from the War Department, would examine Professor Samuel P. Langley’s flying machine and report upon its practicability and its potential for use in war.

14 November 1909—Flying a 50-hp Curtiss plane, civilian exhibition stunt pilot Eugene B. Ely made the first takeoff from a ship. Ely flew from an 83-foot slanted wooden platform built onto the bow of Birmingham (Cruiser No. 2) at anchor off Old Point Comfort, Hampton Roads, Virginia. Despite light rain and fog, the pilot elected to continue with the flight. As he left the platform, the plane settled slowly and touched the water, but rose again and landed about 2-½ miles away on Willoughby Spit. The aircraft sustained slight splinter damage to the propeller tips. 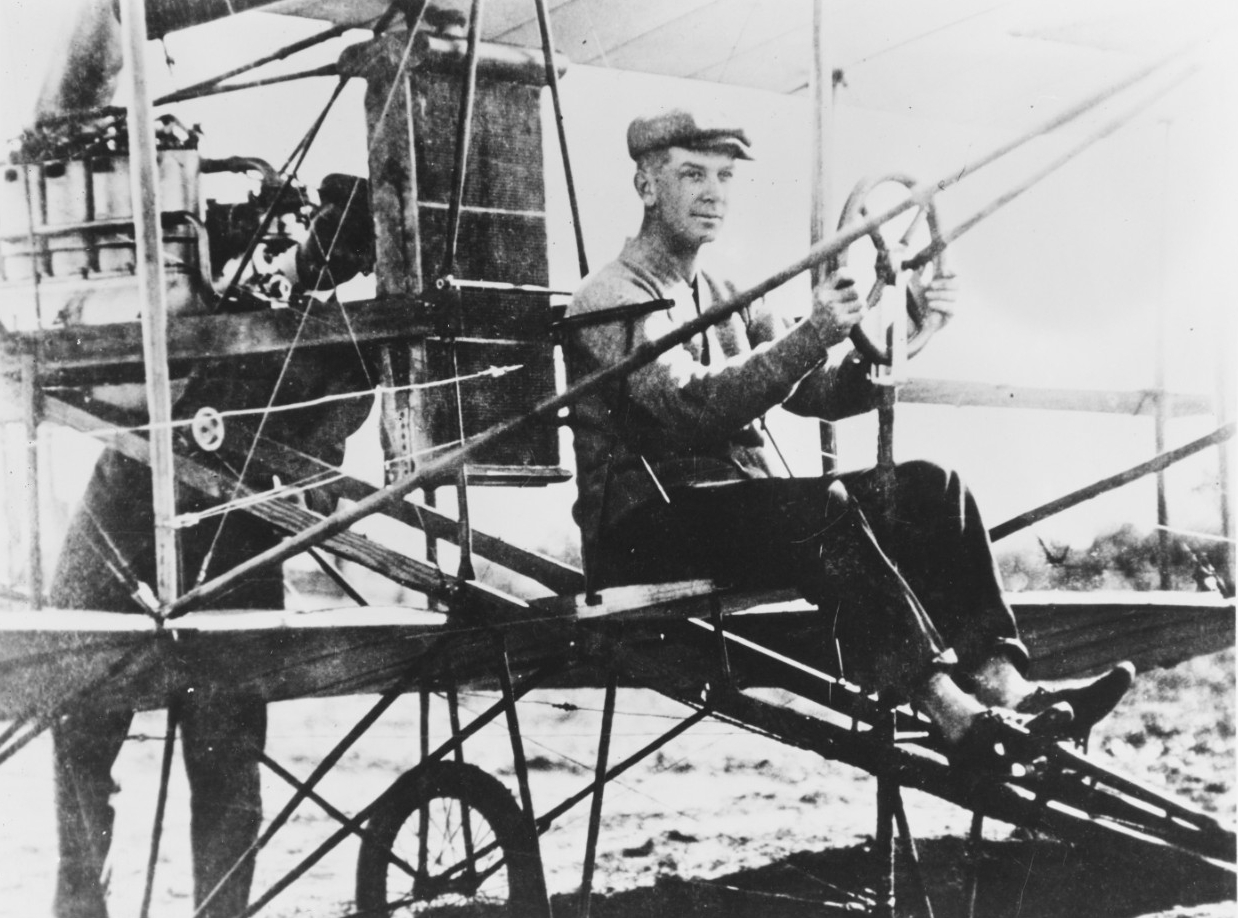 18 January 1911—At 10:48 a.m., civilian exhibition stunt pilot Eugene B. Ely flew the same Curtiss pusher that he had used during his launch from Birmingham (Cruiser No. 2) on 14 November 1910 and took off from Selfridge Field south of San Francisco, California, and at 11:01 a.m. landed on board Pennsylvania (Armored Cruiser No. 4) at anchor off Hunters Point in San Francisco Bay. The plane made a smooth landing from astern onto a specifically built 130-foot long by 32-foot-wide platform. At 11:58 a.m., Ely took off and returned to Selfridge Field, completing the earliest demonstration of the adaptability of aircraft to shipboard operations. 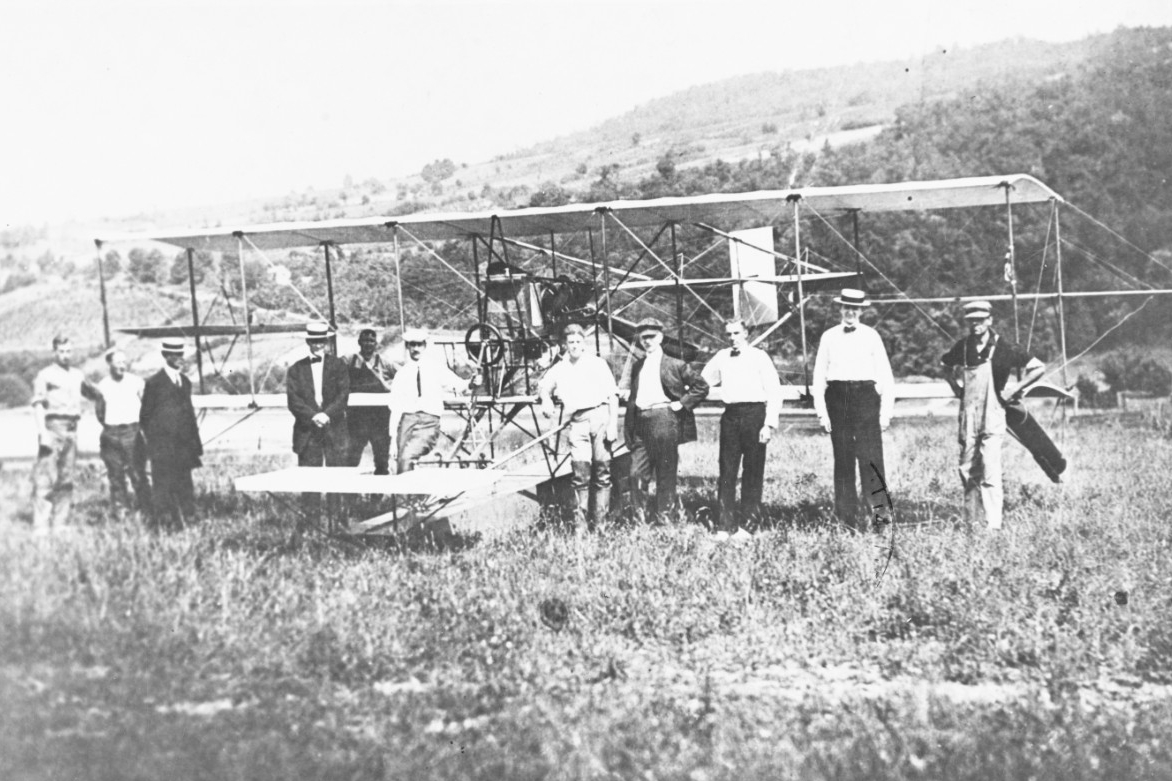 8 May 1911—Capt. Washington I. Chambers of the Bureau of Navigation prepared requisitions for two Curtiss biplanes. One, the Triad, was to be equipped for arising from or alighting on land or water; with a metal-tipped propeller designed for a speed of at least 45 miles per hour; with provisions for carrying a passenger alongside the pilot; and with controls that either the pilot or a passenger could operate. The machine described became the Navy’s first airplane, the Curtiss hydroaeroplane A-1 (later AH-1). Although these requisitions lacked the signature of the Chief of BUNAV—necessary to direct the General Storekeeper to enter into a contract with the Curtiss Co.—they indicated Chambers’ decision as to which airplanes the Navy should purchase. The Navy thus considers 8 May 1911 the date upon which the service ordered its first airplane, and the official birthday of naval aviation.

25 April 1914—Lt. j.g. Patrick N.L. Bellinger, flying a Curtiss AB-3 flying boat from the battleship Mississippi (Battleship No. 23), made the first U.S. operational air sortie against another country while searching the harbor at Veracruz for mines.

5 November 1915—Lt. Cmdr. Henry C. Mustin made the first catapult launch from a commissioned warship, launching in flying boat AB-2 from the stern of North Carolina (Armored Cruiser No. 12) at 1158 in Pensacola Bay, Florida. Sailors had originally removed the catapult from a coal barge, and on 28 October installed the device onto the cruiser’s stern. Assistant Naval Constructor Lt. Holden C. Richardson, CC, and Lt. j.g. Patrick N. L. Bellinger completed an additional takeoff on 6 November, and 1st Lt. Alfred A. Cunningham, USMC, completed the first Marine Corps launch on 8 November. 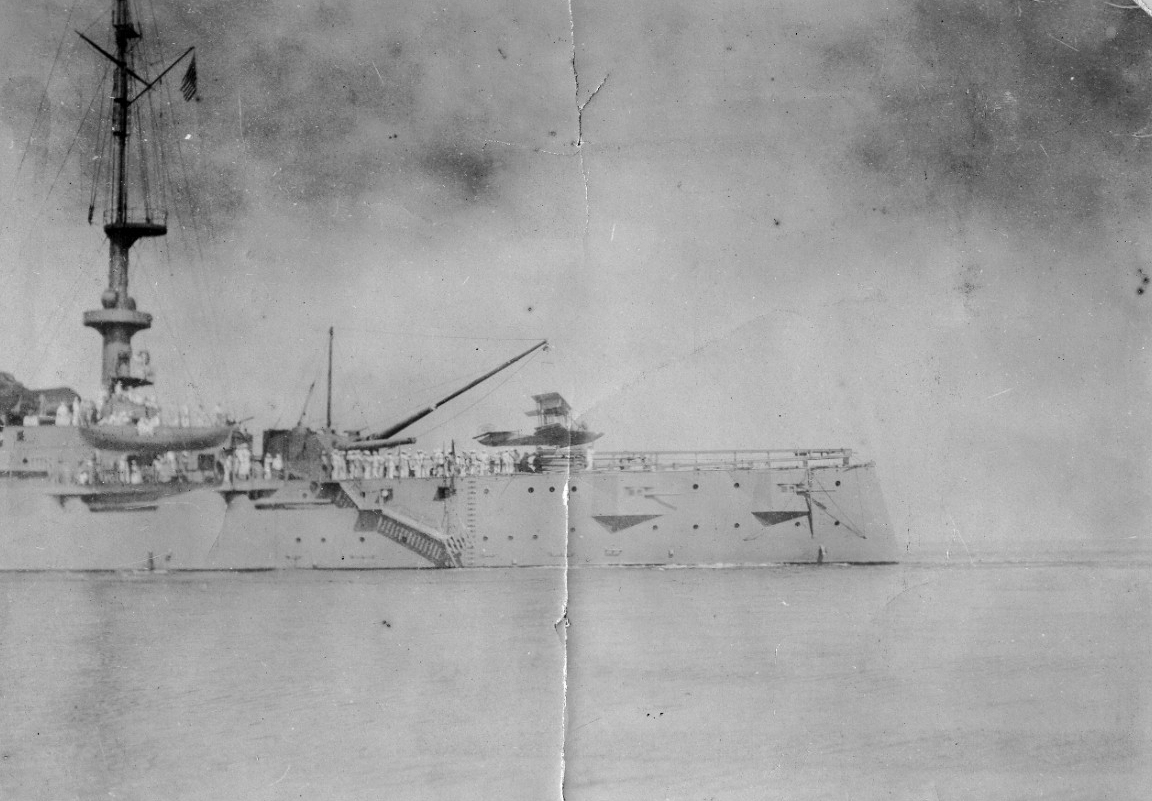 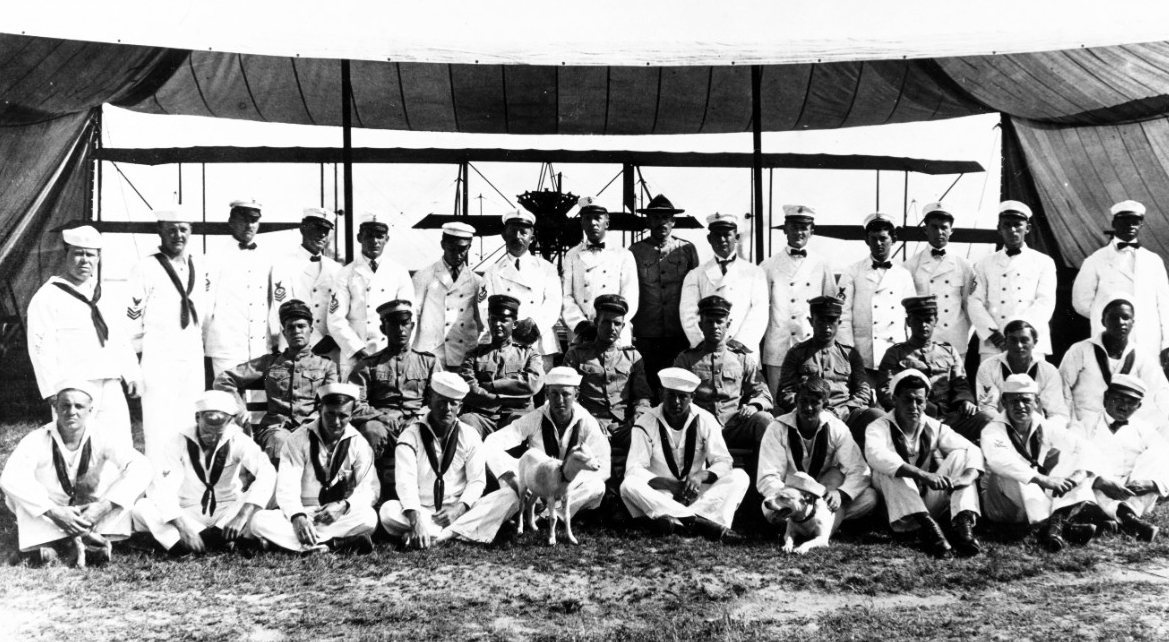